Happy health: What it takes to be a winner

Rafael Nadal is one of the best tennis players in the world at the moment having stayed inside the world’s top ten for an astounding 800 weeks and 71% of that (570 weeks) inside the top two according to the Association of Tennis Professionals (ATP) rankings. Nadal broke the three-way tie between himself, Novak Djokovic, and Roger Federer for most grand slam tournaments won in the open era by winning his 21st title in January 2022 at the Australian Open, the rigorous training schedule he has had to endure throughout his career has differed from when he was younger. It is estimated that a professional tennis player will be on the court for 3-4 hours on any given day of the week with fitness sessions added on top of that before or after. The three main aspects throughout Nadal’s career that have allowed for longevity and success have been the intense training regimen, the team around him, and smart scheduling to tailor to his bodies needs. 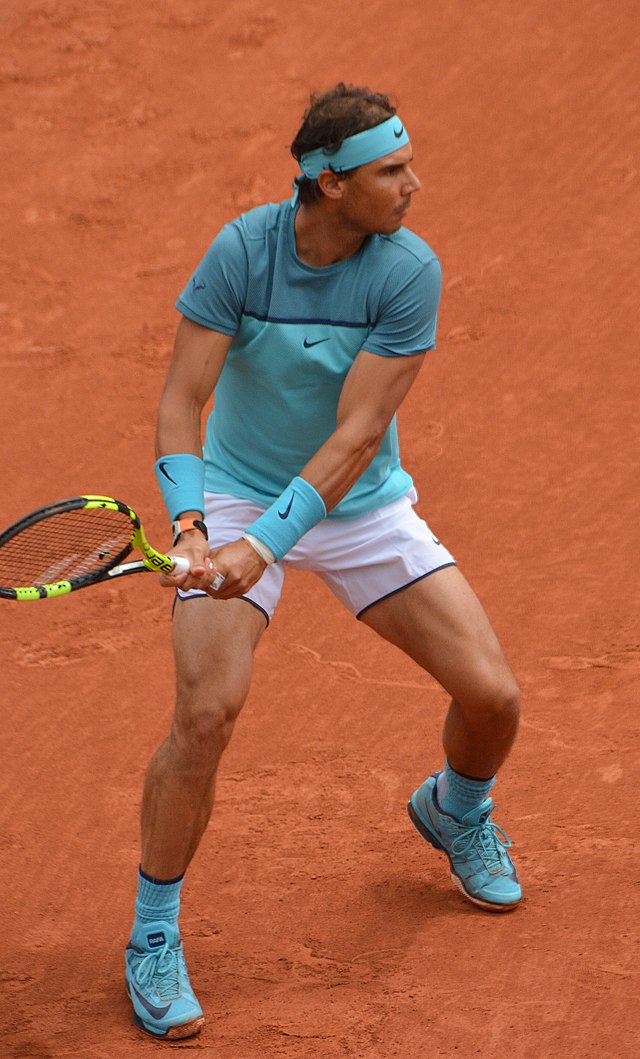 Photo by: Carine06, Pexels
Nadal showing his physicality on the clay courts of the French Open in Paris, France circa 2016

The Tennis season is very long going from January to late November in which these months will consist of many countries traveling too and many tournaments played. As one is playing a tournament they have so hardly worked for, the training periods that one goes through while traveling is completely different from that of a preseason training. High-profile Tennis players like Nadal like to keep their training routines as secret from the public and other players as possible to gain every potential advantage on the court. In preseason that is when he puts the most stress on his body since he does not have tournament play on top of that. Nadal’s day starts off with him waking up around 8:30 am and eating breakfast shortly after. At 9:30 am is when the on-court portion of his training commences at his academy in Mallorca, Spain, and usually goes anywhere between three to four hours. The on-court tennis training consists of Nadal bettering all his strokes through discipline drills with targets on the court to allow for accuracy when he is playing matches.

While on the court, there is much focus on his footwork using many ladder drills that emulate the same movements he would use in a match to set up to hit the ball. After the four-hour training session in the morning is done, Nadal has few hours break to recover before going back to his academy and begin the gym session where the focus of this is solely to improve muscle endurance and strengthen his body. Although Nadal has been praised his entire life for having been gifted with large and toned muscles, it is a known fact that he does not lift weights exclusively to strengthen his body but goes through a banded training program that will provide the necessary resistance to make it very difficult on himself.

Nadal stresses the legs as much as he can in these training sessions as they are the most important part of his game. He does multiple exercises that involve having bands on one or both legs for short explosive periods to simulate the burning fatigue that he would feel in a match. While traveling for tournaments throughout the year, his ability to put his much stress on his body is limited because of the wear and tear his body is accumulating from so many matches. During the regular season, almost all his workouts are to purely maintaining fitness and keep his body injury-free since he is only getting older, and his body is becoming more and more fragile. An important aspect that has allowed Nadal to sustain such a long career has been his traveling physio which has been a part of his concrete team since he was a young player.

The one aspect of Nadal’s career that is praised by many tennis legends is his consistency day in and day out with the work he puts in on and off the court. Unlike other professional Tennis players, one factor that has stayed rock solid throughout his entire career is the support team that has traveled with him to every tournament since he was 16. Nadal up until 2017 had his Uncle Toni in the main coaching position and it was not until four and a half years ago when Toni became older and decided he no longer wanted to travel every week of the year that Nadal had to make a coaching change. When the coaching change did come it still remained someone he has known since he was a kid and also who had reached number one in the world rankings fellow Spaniard and countryman, Carlos Moya.

Nadal at his tournaments has not only his coach but also the physio that helps with maintaining an injury-free lifestyle by putting Nadal through rigorous stretching routines for his entire body post-practice/matches. The physio’s job is to focus on the muscles of use for Nadal which in his case are his legs and left arm. By having his physio with him, Nadal is basically a puppet and does whatever his physio tells him to do.  Another frequent traveler with Nadal to his tournaments has also been his mental coach. Most of the top players have mental coaches that they pay to travel with them to discuss anything and everything that could allow him to perform better on the court. Mental coaches have been added to top players’ teams like Nadal to keep mental health at a maximum since the Tennis season is very long can wear even on the best of players.  By having consistency in his support staff, he has been able to build not only the necessary trust to be great but also have the same routine in his life and practice that has allowed him to fully trust those around him 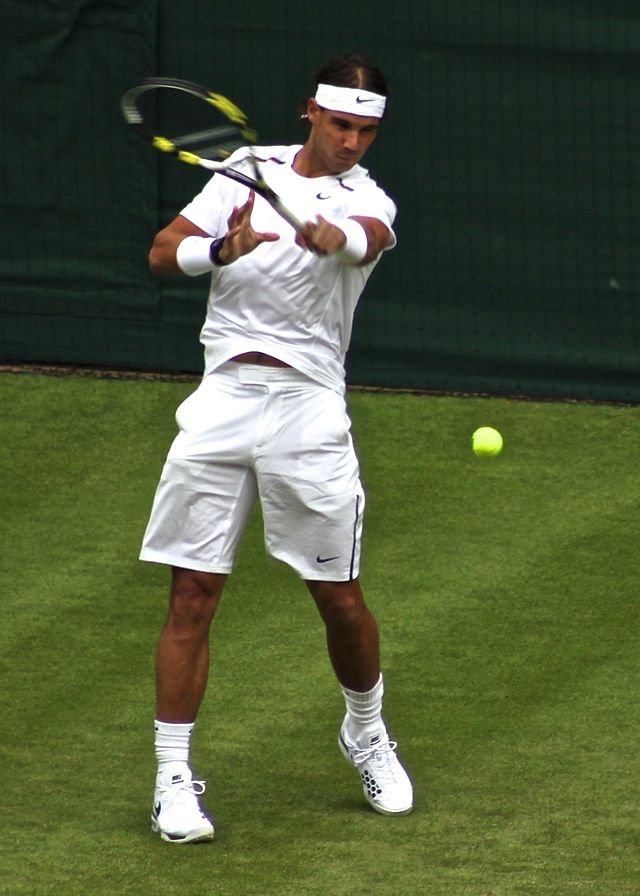 Photo by: Su May
Nadal on his “least successful surface” on the grass courts of Wimbledon in 2011

With the help of his team, a top player like Nadal is able to make his schedule throughout the year however he pleases. Nadal is nicknamed “the king of clay” as he has won a record 13 French Open titles and 26 masters 1000 titles (on clay alone). With just French Opens alone, Nadal would still be the man with the fifth most Grand Slam titles in the Open era. With such a liking for the clay surface, Nadal has made the clay season a priority each year to allow his body to recover more by skipping some of the major hard-court tournaments throughout the year. Most recently Nadal was scheduled to play what is known as the sunshine double in Indian Wells, CA, and then fly the next week to Miami, FL. As the tournament in Indian Wells started, Nadal immediately pulled out of the Miami Open to give his aging body time to recover for the clay swing which started in the middle of April.

As seasons have gone on, Nadal has meticulously changed his tournament scheduling depending on what he and his team have felt to be the most beneficial for his body, mind, and longevity of his career. Although having won Wimbledon twice in his career, there have been seasons where he has completely skipped the grass-court season entirely. A luxury that Nadal has been able to have is to make these types of decisions impacting his world ranking. By creating the ideal schedule for him throughout the years, he has been able to peak at the right tournaments which have allowed him to have continued success each season for the last 18 years.