I was first introduced to success in fiery pits of gravel and cement walls. Landscapes where the air, chock-full of drywall mist would stain clothes as well as coat lungs. The smell of paint made you dizzy, and the only way to escape it was to go outside and huff concrete dust mixed with thick, southern humidity. Due to its pervasive grit and difficulty, success isn’t a word that crosses most people’s minds when faced with mention of construction.

Like most fields, construction has a hierarchy or chain of command, and at the bottom of that chain dangled the laborers. Some were addicts, others were college students, a couple were immigrant workers, and almost all of them were basically impoverished, born and bred. One of my jobs at the time was to direct them around the site, give them my boss’s orders for the day, and keep an open ear if they had any questions. They were given jobs that no one bothered with, because they were either too physically demanding or deemed insignificant by the rest of the trades. They’d pick up rusty scrap metal, mop up messes, throw away used toilet paper, or even transport ridiculously heavy material up multiple floors just to have their boss say that it was the wrong material. Sometimes, electricians would leave their cut wire nibs strewn across the floor and then, during their lunch break, watch as the laborers picked up each individual piece by hand because there was a shortage of brooms that day. I remember politely asking some of the electricians, confidently munching away at their tuna fish sandwiches, whether they could stand to clean up some of their own junk to alleviate some of the laborers’ burden. A slight pause followed by a confused glare gave me everything I needed to know. However, before I could reply to their lack of awareness, they began snorting like pigs choking at a trough. “Don’t worry. The rent-a-drunks got it handled,” they panted after mustering enough breath to push down their laughter.

Many of the laborers admit to falling into this profession because of their bad habits getting the better of them, hence the term “rent-a-drunks”. While the weight of welders’ discarded scrap metal burned their backs with messages such as “slow”, “slackers”, and “not good enough”, the laborers were worn down like leather belts and shoe soles. Everyone would tell them that they could never change, that their bad habits would always be there. They wanted to change but didn’t believe they ever could, because they were barely ever praised.

Unlike most of the laborers, Larry was one of the chosen few to man the job 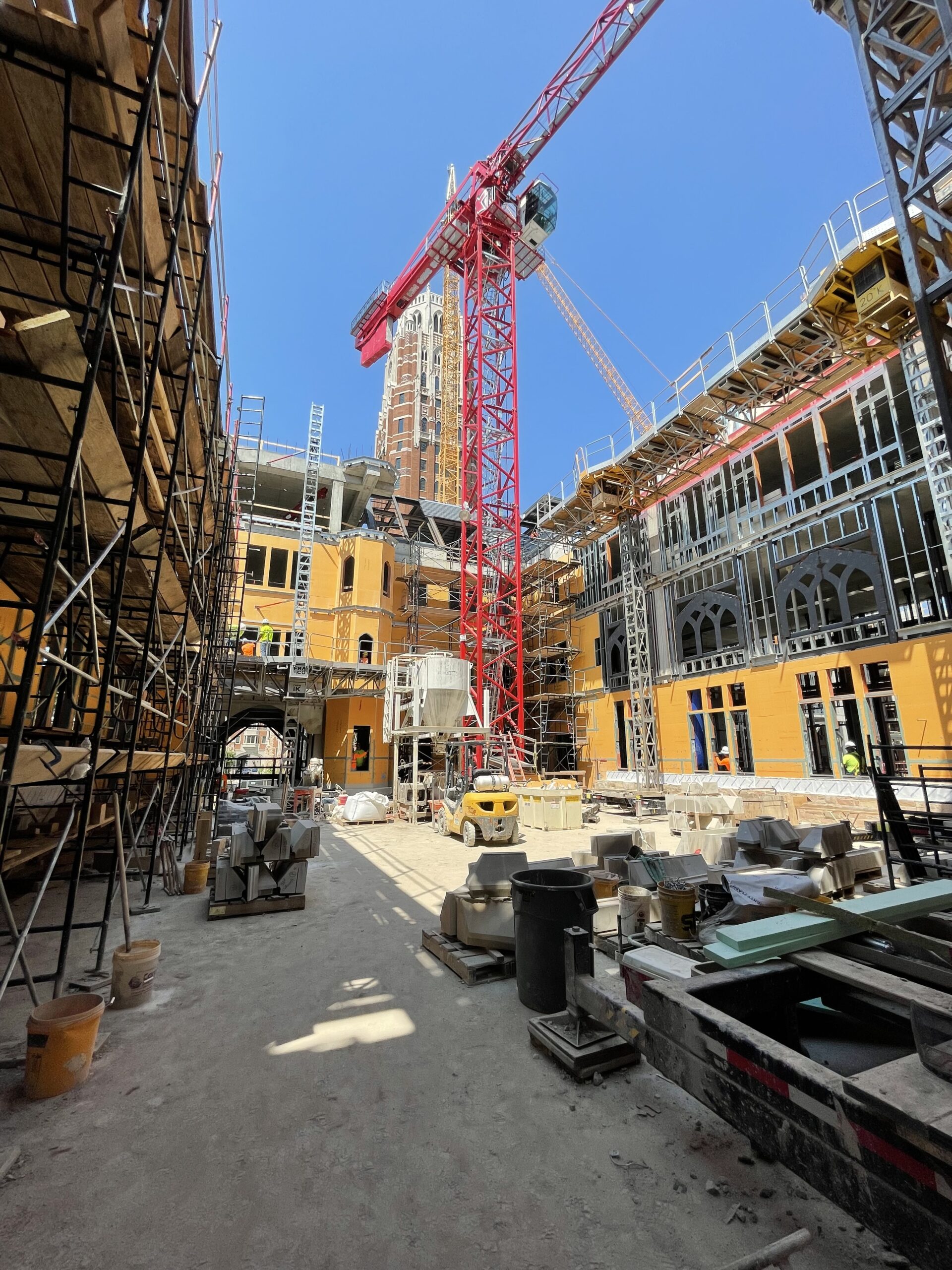 Ground view of crane taken in the heart of a construction site (Photo by: Ben Patterson)

site’s elevator. Under the jealous eyes of his peers, he would get to work at six o’clock sharp with his Twice Daily supersized cup full of Mountain Dew, plopped down on his plastic folding chair, and immediately started watching downloaded movies on his iPhone, running other workers up and down the building with Die Hard (1988) playing in the background. Ten hours a day, six days a week, Larry stayed alone in that box encased in purple Styrofoam. Every day, both laborers and other trades alike would moan and shout, “Aye man, when’s Larry gonna come out and lift some shit?” or “Man, fuck that dude. He ain’t do shit. He late as fuck when he runnin’ that elevator.”

I tried to cram these complaints into the white noise category, hoping Larry wouldn’t hear them from me or anyone else. These complaints soon turned to insults which later morphed into ostracization that continued for months, causing him to show up to work at 9 instead of 6, take an hour and a half for lunch breaks instead of the required thirty, and bring workers up the building at drastically slower pace. Overtime, he became more exhausted and spacey from his increasingly “fun” nights after work. Nearing the end of his time on the job, I caught him smoking darts in one of the newly furnished rooms, because I got word that there was a “raging line” that had formed at the basement elevator again. After stumbling out of his chair and struggling to find the words to fill his empty excuses, Larry lifted his shoulders in defeat and sighed. “Sorry. Bad habit,” he said. Not too long after this incident, his coworkers and I had received the news of his passing. He had died due to a drug overdose.

Even after his passing, Larry’s coworkers never fully grasped whether they were to blame for his inability to change his bad habits. What they didn’t realize was that habits are though social means: praise and support, compliments and acknowledgement, and objective evidence of progress. Larry didn’t have this manpower of support to properly escape his habits. However, this form of change is difficult, especially when someone has already been ostracized from their pack and resolved themselves to disassociate from it.

Although some come tragically close, not all the laborers’ stories where quite as severe as Larry’s. Despacito, a laborer from one of the other job sites I had worked on, was slim to the bone and one of the youngest laborers. Many of the other trades would tease him not only for his build that stemmed from malnourishment and low funds but also for his maturity, even though he was well into his mid-twenties, had a girlfriend, and worked multiple “side hustles”. No one, especially the laborers, would acknowledge any of his efficient planning and innovative ideas because of his age. Even his nickname, Despacito, was originally created by drywall workers to point out how “slow” he was when pushing drywall scrap from the 20th floor all the way down to the basement dumpster. For the first few weeks, he took more and more smoke breaks. However, despite being ridiculed, Despacito would later gain the trust of the other managers due to his high work ethic and ability to overcome his flaws over such a short time. He would latch onto every little gesture of trust and support such as finally getting a radio from the managers or having the other laborers laugh at his witty jokes and puns. Although Despacito’s journey ended in the shinning recognition of his peers, it was, unfortunately, a rare sight to see among the rest of the laborers.

The differences between Larry and Despacito’s stories could be explained through their age, time on the job, or ability to adapt to their harsh environment, but the main causal factor in their wildly differing experiences was, in no doubt, due to their peer judgment. About 92% of Americans alone believe fame and fortune are the only 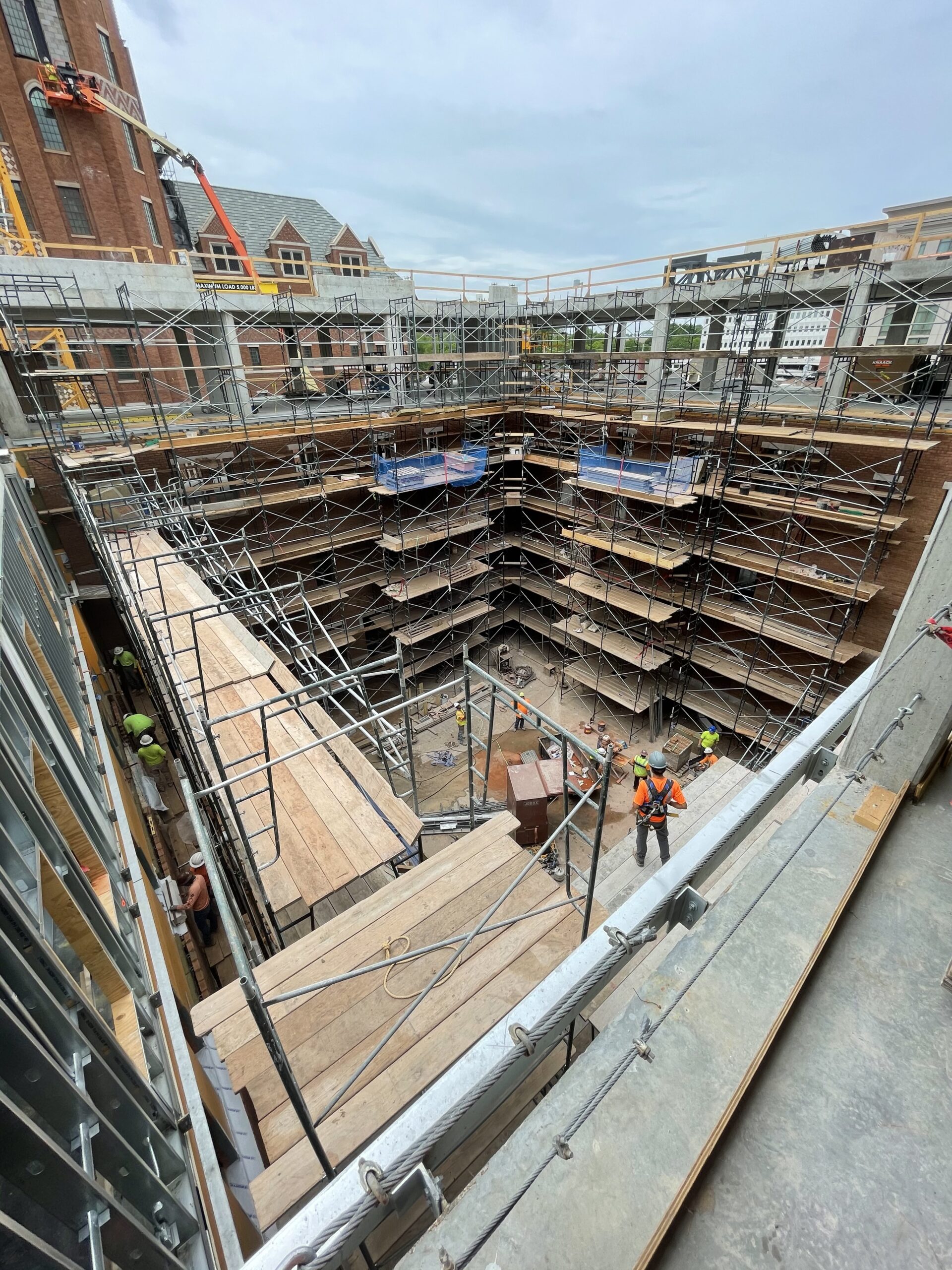 View of a construction site from above (Photo by: Ben Patterson)

factors that show results of success. Money and peer acceptance have a drastic effect on any person’s approach to self-improvement and change. Most of the time, the environments we find ourselves in, of which a majority depend on peer judgement, are the defining factors in our success. A fish can only be as great as the body of water its placed in. Larry was about 50 years old and had not only faced this ridicule for some time but had also been worn down physically from the constant drug use. After his death, I had learned that Larry faced criticism everyday which had only increased in severity and magnitude. While Despacito still had the fire in him to push through, Larry was scraping by to survive through his bad habits, which brings me back to that scene in the furnished suite on the fifth floor. In that one instance, Larry was swallowed by his peers and became convinced that he wasn’t going to change. His insurmountable realization was sounded through that simple and frail sigh.

Despacito took his nickname and made it his own, not to reflect his bad habits, but to shield himself, to guard his motivation of personal change. It only took a simple gesture such as saying “good idea” to let Despacito know he could improve. Sometimes, I wonder whether I should’ve told Larry to keep moving forward, that there would certainly be an end to the heavy insults chucked in his face. I also question if I could’ve convinced him that success was truly a possibility, that smoking a single menthol wasn’t a sign of “potential”. When the job site found out about Larry’s death, there was a heavy air of guilt that sat and mixed in with the humidity. No one could focus on their job, no one talked or cracked jokes, and no one wanted to work. They just toiled away, stewing in their own denial as to why such a tragedy could occur, when they knew it was growing, waiting in front of them the whole time.

Ban the boredom spring 2022: Sticky static, how Preservation Hall brings us all closer together
Music Clubs