Alex Smith, a quarterback in the NFL for 16 years, was the first overall pick for the San Francisco 49ers in 2004. Although his career was not filled with tremendous stats in record books or a long line of championship trophies, Smith made a significant impact in other facets of the game, most importantly his resilience to return to the game at a very high-level time and time again after facing numerous amounts of adversity. 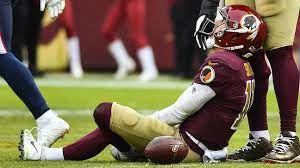 Alex Smith laying on the field after his injury. (Photo by ESPN)

On March 12, 2013, Alex Smith was traded to the Kansas City Chiefs, because of the emergence of Colin Kaepernick, who led the 49ers to a Super Bowl appearance acting as Smith’s replacement.  Five years later, on January 30, 2018, “The Redskins and Chiefs reached an agreement to trade Smith to Washington for corner back Kendell Fuller and a 2018 third round draft pick, per Ian Rapoport”. For the second time in his career, Smith’s performance on the field had been outshined by a new up and coming quarterback, Patrick Mahomes, and he was traded away.  Washington had always been storied franchise with a ton of history, from Superbowl victories to hall of famers like John Riggings and Sammy Baugh. So being traded to such of great franchise would have been seen by some as a blessing for Smith, but they were wrong.  The newly named Washington Commanders as of late have been the laughingstock of the NFL, especially the NFC East with rivals like the Dallas Cowboys, Philadelphia Eagles, and New York Giants.  Smith had significant challenge ahead if he was going to revive his career as a starting quarterback in a franchise that had not had much success in years. To make things worse, on November 8, 2018, Smith was sacked in the backfield while playing the Houston Texans. As his foot was caught in the caught and stuck in the grass, while his body was bent in the opposite direction. Many compared Smith’s leg injury to the one of Joe Theismann’s injury which ended his career. While addressing Nick Saban and the Alabama football team, Smith said, “When I first broke my leg and I was laying on the field I was like ‘Oh’ the doctors would put me back together and my thoughts were to spring ball.”. That wasn’t the case for Smith, the road to recovery and survival was a long difficult journey. Smith also said, “When the infection set in, and the doctors were talking about cutting off my leg off to save my life, my mindset flipped”. Smith, in total had seventeen surgeries on his injured leg after having multiple infections post-surgery. Elizabeth Smith, Smith’s wife said, “The way that the doctors explained it to us, he no longer has a sports injury, he has what would be more comparable to a military injury. He had a blast injury.”. Many people speculated that Smith’s football career was over.  They could not fathom why he would even think about returning to the football field.  Smith almost lost his life, almost lost his leg, and many thought it was a miracle that he was simply walking. But Alex Smith looked at all rehabilitation hours, the pain and stress he endured, and doubters who said it could not be done and said, “you won’t win”.

In 2019, Smith announced that he planned to make an NFL return in 2020 and he did just that.  “His motivation and sheer willpower afforded him the chance to not only continue his career, but also elevate the Washington Football team to its first NFC East crown and postseason appearance since 2015.   His determination and commitment to return to the playing field and perform at a high level earned him the award for AP Comeback Player of the Year for the National Football League!  His teammates were inspired not only by his resilience to come back and play after such a significant injury, but by his leadership both on and off the field. Former teammate Terry McLaurin said in an interview, “You come in the huddle, when you see (No.) 11 coming in, you feel like you have a chance. And the way he galvanized our team and out us in the best position to make a playoff run was really cool.” 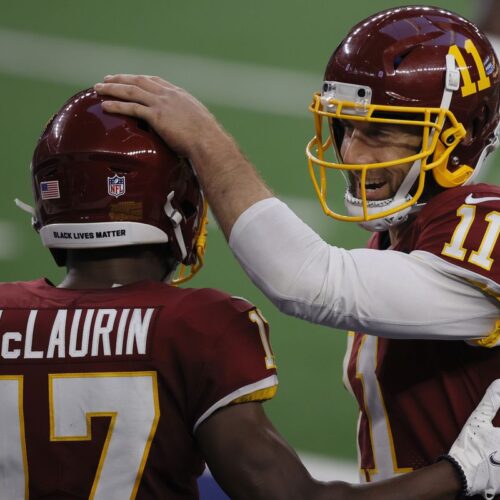 Alex Smith and Terry McLaurin celebrating after a big play. (Photo by NBCsports)

Throughout an athlete’s career, players face different types of adversity –from failure to excel at a sport, to changes in team personnel, to injury – most of which is out of a players control.  Facing adversity is part of life, but one thing that makes sports unique is the large volume of adversity that an athlete must endure and work though on a regular basis.  This is exactly why the Alex Smith story is so powerful.  Smith could have easily let these roadblocks in his career turn into frustration and anger.  He could have let anxiety or depression about his circumstances of his multiple trades after being outperformed by his back-up to his horrific injury get the best of him.  Instead, he chose to focus on what he could control, which was working as hard as he could so he could return to do what he loved to do, playing quarterback in the NFL.

The best way to combat adversity one faces in sports –or in life in general– is to have a mindset of acceptance. Accepting that you cannot your happiness or your performance be dictated to you by things you cannot control.  Everyone faces adversity, but it is how you work through it at the end of the day is what really matters.  Watching the adversity faced by Alex Smith and how he got through it all, has given me the tools necessary to combat my struggles in college baseball, but also everyday life.  In baseball, the best baseball players in the world have a .300 batting average.  In other words, the best hitters in the world fail 7 times out of 10 or 70 percent of the time they step up to the plate to bat. Most of the time as a hitter, you can do everything right and you still do not record a hit. There are nine defenders and only one hitter, so the odds are not in the hitter’s favor. Days or even months of this “failure” can be very disheartening. Accepting the fact that baseball is a game of failure and that struggles will happen is easier said than done, but truly implementing this into my life will allow me to overcome my recent struggles and equip me to deal with future obstacles on and off the baseball field.

Being a college athlete is not always what it seems from an outsiders’ perspective. There are a ton of things outside your control such as a coach’s decisions on playing time to the time-consuming schedule of games, workouts, and practices.  You often don’t even have control of when you can eat. Juggling class, study hall sessions, homework, group projects, and then going to practice, weightlifting, and traveling to games is a very taxing lifestyle.  Then on top of that as a college athlete you have very high expectations of yourself in terms of performance on the field.  The best way I balance this lifestyle is by just focusing on the current task at hand and working through that.    Being a baseball player is very relatable the game to life. One quote that my head coach always reminds us about is, “Ten percent of this game is what happens to you, and the other ninety percent is how you react to it”. The second someone becomes fixated with the uncontrollable is the second you see failure and anxiety creep into their minds. For me personally, this year, I went through a tough stretch hitting. I kept stressing about not hitting to the best of my ability and I let it affect my everyday life. Not hitting well, despite being incredibly frustrating, is outside of my control. In reality, if I just focus on things I can control, the uncontrollable with workout on its own and not impact the way I feel about myself and my sport.