Art-chitecture: Louisiana Superdome, a look back

Editor’s Note: New Orleans is a city that is considered to be one of the top tourist destinations in the United States, receiving almost 20 million tourists a year. One of those reasons is the unique architectural styles found throughout the city, such as French influence and shotgun homes. Another is the unique style of city planning that began in Jackson square and follows the form of the Mississippi River. The history of the unique architectural styles is something New Orleans natives and those who visit should be informed on — everything from street tiles to not-so-tall buildings. This piece on the Superdome was originally published on January 17, 2017. 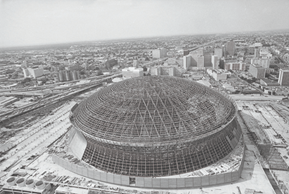 Planning for the Louisiana Superdome began on November 8, 1966, when voters of Louisiana approved a constitutional amendment creating the Louisiana Stadium and Exposition District. On that day, the foundations for the construction of the Superdome were established (Chafin, Andrew. Louisiana Superdome, “Newest Wonder of the World” Facts, Photos, Statistics. New Orleans, Louisiana. Louisiana Superdome Commission, 1975. 28). Before completion, 169,000 cubic yards of concrete would be incorporated into the Superdome structure. All together, 20,000 tons of steel was required (Curtis,Nathaniel, C. “The Louisiana Superdome.” New Orleans:CLG Productions. 1976, 21). The Superdome held a large place in the media climate, both during construction and after it debuted. The Superdome was meant to bring tourists, conventions, media, and many professional sports teams and events to New Orleans. When the Dome opened, the media coverage was intensive and it put downtown New Orleans on the map. New Orleans was now recognized as a center of sports media and journalism and a premier tourism, event, and convention destination. The media attention that the Dome received was both national and enthusiastic, as The New York Times stated upon its completion, “The Louisiana Superdome will make all other stadiums in existence as obsolete as Rome’s Coliseum”(Chafin, Andrew. The Super Fans. Lebanon, Virginia: Sharon Publications. 1974. 62).

The planning and construction of the Superdome was a monumental endeavor. The sheer size and ramifications of the building caused its share of problems. The location of the Dome was even a point of contention in the beginning. The construction of the Superdome began with clearing the site and driving piles for foundation. The weight of the building is founded on 2,100 prestressed concrete pilings, each consisting of two eighty-foot lengths, joined together by a steel collar. These pilings were driven 165 feet down to the Pliocene crust of the earth (Curtis,Nathaniel, C. “The Louisiana Superdome.” New Orleans:CLG Productions. 1976, 21). Many people believed that the downtown location would create traffic issues for the people who worked in the Central Business District. Alternative locations in other parts of New Orleans and even sites in adjoining parishes were considered. But in the end it was decided that the CBD was the best place for it. The steel used to construct the Superdome was shipped to New Orleans from Pittsburgh, Pennsylvania and unloaded on the West Bank of the Mississippi River. Piece by piece, it was transported at night in order to not affect the traffic across the Greater New Orleans Bridge (Curtis,Nathaniel, C. “The Louisiana Superdome.” New Orleans:CLG Productions. 1976, 21). New Orleans Mayor Moon Landrieu’s strong approval of the site helped to cement the decision (Chafin, Louisiana Superdome, 35). Like many major construction projects, the building of the Dome was fraught with some problems, including lawsuits, engineering problems, and other construction problems. When the project finally got under way, four architecture firms worked together on the stadium. Curtis and Associated Architects, Inc., Edward B. Silverstein and Associates, Noah, Norman and Nolan Architects, and Sverdrup & Parcel and Associates, Inc. all contributed. Some important names to include are Earl Stahl, the Project Director, and Horace L. Hayden, the Chief of Design (Louisiana Stadium and Exposition District.“Facts About The Louisiana Superdome.” New Orleans, Louisiana Stadium and Exposition District. 1971, 13). The monumental domed roof was put in the charge of a subcontractor, Roof Structures, Inc. of St. Louis, Missouri (Chafin, Louisiana Superdome, 39). 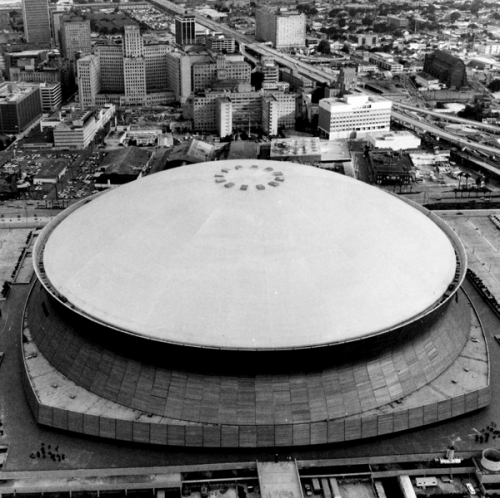 The Louisiana Superdome is located at 1500 Sugar Bowl Drive in the Central Business District of New Orleans, Louisiana. The Dome rises 273 feet from the ground at its highest peak. It covers 13 acres of land and is the largest steel constructed room in the world unobstructed by posts, filling 125 million cubic feet of space. Over 20,000 tons of steel and 150,000 cubic yards of concrete were required in its construction (Chafin, The Louisiana Superdome, 39). The total cost to build the Dome was over 163 million dollars (Chafin, The Louisiana Superdome, 29) and the facilities it boasted were extensive. With space to park 5,000 cars on site, seating for well over 90,000 people, and 33 additional meeting rooms holding thousands more, (Chafin, The Louisiana Superdome, 19-24) the Dome was mammoth in every way. Included were restaurants, lounges, concessions, shops, offices, a bank, and even an on-site medical clinic (Chafin, The Louisiana Superdome, 19). Other highlighted features included movable seating that could change the configuration of the stands for different sports and events at the touch of a button and a 1.3 million dollar superscreen television system (Chafin, The Louisiana Superdome, 19). The television system was particularly revolutionary because it had instant replay and slow motion capability, thus mimicking people’s home entertainment systems. Plans were to not only use the television system during the games but also before and after, showing other important games, thus easing parking and traffic woes by staggering departure times (Chafin, The Super Fans, 68). Equipped with the latest technology and features, the Superdome was the pinnacle of construction and city planning of its day. The Dome still wows audiences today in its role as the home of the New Orleans Saints National Football League franchise and the Tulane University Green Wave football team. During the 2009-2010 NFL season, the Saints won eight games in the Superdome, and eventually went on to defeat the Indianapolis Colts in the Super Bowl.