Ban the boredom: Putting down roots at Blue Cypress Books

Editor’s Note: May we Mayke a suggestion? No, our suggestion is not that we stop using cringeworthy puns, but it is to think ahead! We know what’s coming: the summer. The time when the air is heavy, the tourists have abandoned ship, and us locals are left to enjoy our city, heat and all. That’s where we come in! All the month of May we are going to prepare you to “Ban the Boredom” by giving you the best places, the best restaurants, and the best event, but since we never do anything “normal” at ViaNolaVie, we are basing these suggestions around various psychological states! If you’re a total introvert, we’ve got a spot for you! If you have a disability, we’ve got the places that actually don’t discriminate and let you get down the way you want to get down. We’ve got something for everyone because New Orleans is the city for everyone! For this final piece in our “Ban the Boredom” series, we’re are turning to writer’s Charlotte Milliken’s brilliant look at Blue Cypress Books. 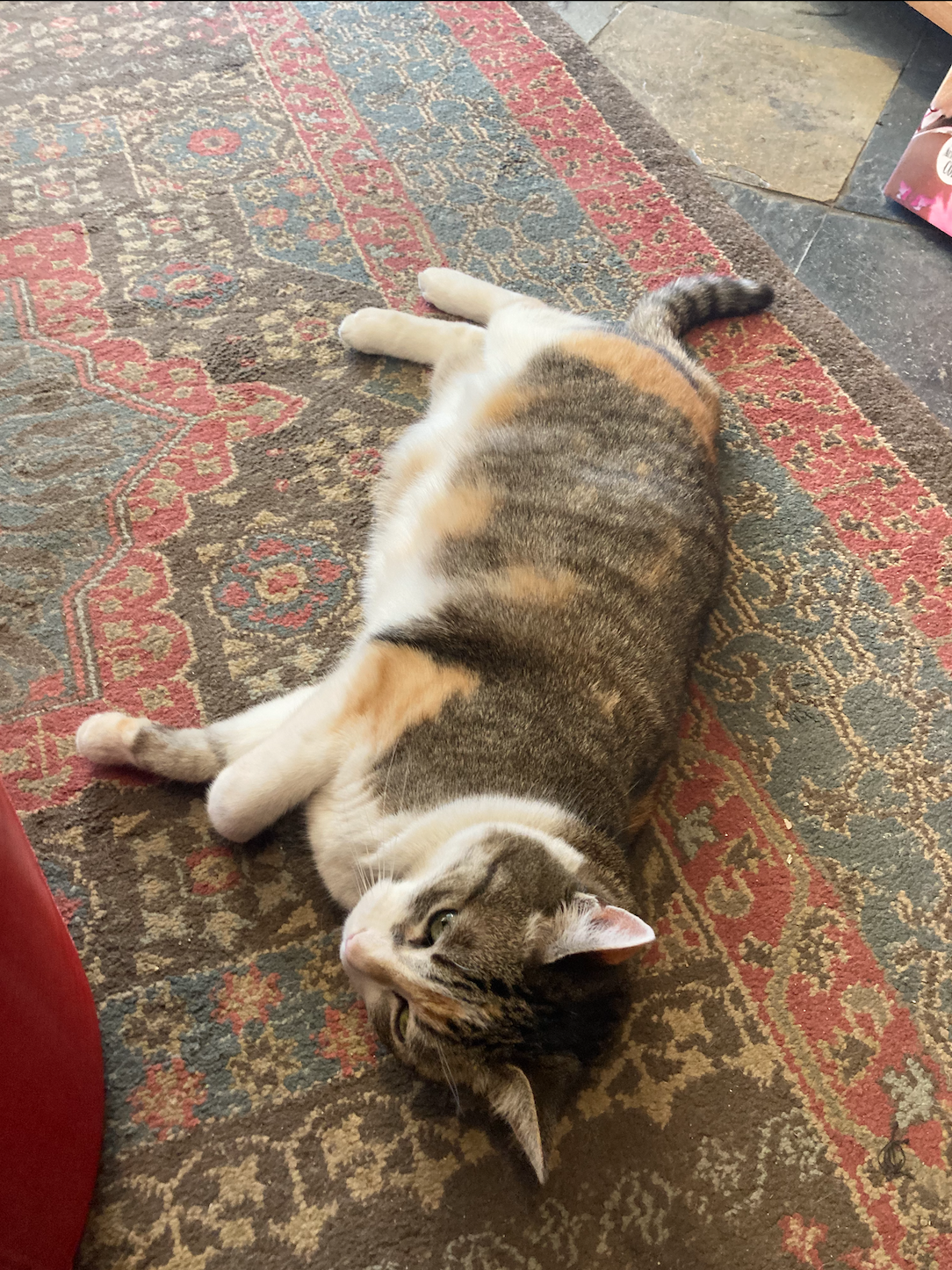 The cat of Blue Cypress Books (Photo by: Charlotte Milken)

Cats have played a role in bookselling since their domestication. In Ancient Egypt, they were trained to hunt rodents and pests that otherwise might have eaten the fragile manuscripts. Over time, this working relationship with humans developed into something deeper. Beyond their practical value, cats were a source of emotional and spiritual support. They attracted patrons and fostered community engagement. In modern times, cats are a quintessential part of the independent bookstore formula. Serving as mascots and social-media moguls, they can entice customers from all over the country. Some cats even reach celebrity status; when a bookstore cat in Chilliwack passed away, the town instituted an unofficial Ginger Cat Appreciation Day. Blue Cypress Books’s resident cat is named Kitty Meow, although her collar simply reads “Bookstore Kitty”. She has a habit of sleeping in the middle of the floor, directly in the path of customers. This does not appear to disturb her; if anything, her nap location seems designed to ensure a greeting from every new person that enters the store.

For the first 13 years of its life, Blue Cypress was a tiny 900 square-foot shop at 8126 Oak Street. Its two rooms were lined with shelves of new and second-hand books, loosely organized by genre. In the summer of 2021, the bookstore moved to a larger property at 8123 Oak Street, directly across the street from their old place. This expansion doubled the size of the shop by adding a second floor, which would become a dedicated space for author readings and other events. I had visited the store on the day of the grand-reopening, which was a festive affair; the space was packed with regulars and neighboring business owners, such as Claire Levy, owner of Live Oak Cafe across the street. All were celebrating the successful move. It was hard not to get caught up in the excitement; at one point I found myself earnestly congratulating the owner, Elizabeth Ahlquist. “We’re so happy to have this much extra space,” she replied.

For the last few decades, independently owned bookstores have been struggling to compete against mega-corporations like Amazon. The rise of e-commerce, coupled with the COVID-19 pandemic, has only exacerbated this issue. Indie booksellers have had to get creative in order to survive; one store in Ontario even began to sell complementary pairings of books and wine during the pandemic. Instead of going digital, many independent bookstores have focused their efforts towards enhancing their physical spaces. Using community, curation, and convenience—a strategy Harvard Professor Ryan Raffaelli calls “the three c’s”—brick-and-mortar bookstores create a unique and inviting atmosphere, something that cannot be replicated by the digital market. Blue Cypress has a calendar of events on their website, with poetry readings hosted by local writers, and a book club that meets on the third Wednesday of every month.

The drive to find community is a powerful one. Humans are social animals by nature, and cooperation is our primary survival tool. This is especially true in New Orleans, a city that has been devastated by natural disasters. A study by political scientist Daniel Craig found that it is usually personal community ties, not government aid, that determines survival. Neighbors can connect people in need to one another and disseminate local knowledge. Less than a month after its grand re-opening, Blue Cypress was forced to shut down due to damages sustained by Hurricane Ida. The store posted on its official Instagram asking for support from the community, and created a GoFundMe for donations. By the end of the week, the campaign had surpassed its goal of  $7,000 in donations, and Blue Cypress was able to reopen. 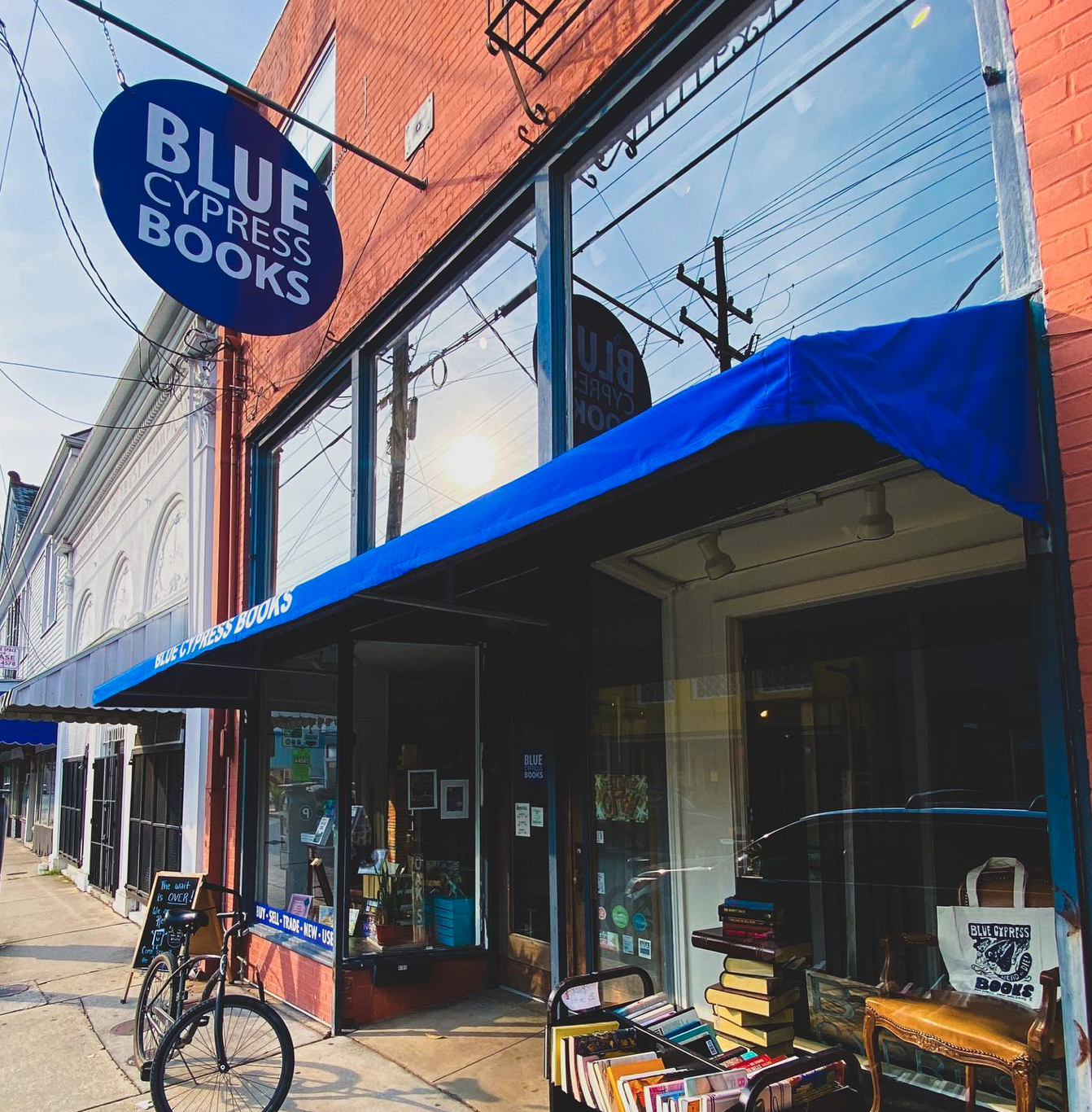 Blue Cypress put that GoFundMe right back into the community. At the front of the store sits 3 large shelves of books dedicated to the subject of New Orleans. They span a range of topics, covering history, art, and tradition from every culture or demographic imaginable. Throughout the rest of the store, several books are displayed face-outward on each of the genre-divided shelves. Stuck to their covers are pieces of paper that declare “local author!” in bold letters. Many of these books have further notes attached to them, pulling significant quotes or offering brief reviews. These notes serve as guideposts, directing uncertain patrons towards particular titles. Resting on the top of one bookshelf is a 25-cent gumball machine filled with coupons, stickers, and other goodies. A sign taped to its front proudly announces that all proceeds benefit Southern Solidarity, a grassroots organization that delivers resources to the unhoused in downtown New Orleans.

On a bench on the second floor is a basket of zines and books with provocative titles like Fugitive Gardens and Unfuck Your Blow Jobs: How to Give and Receive Glorious Head. Noticing my curiosity, a staff member informs me that everything in the basket is from Microcosm Publishing, an independently owned publishing house based out of Portland, Oregon. Founded by a neurodivergent man named Joe Biel, Microcosm Publishing gives a platform to marginalized voices in order to teach self-empowerment and challenge popular narratives. Several of these zines are propped up on various chairs and stools throughout the store, as if inviting customers to sit down and learn something new.

Heading down the steps from the second floor, my eyes once again land on Kitty Meow, who has moved to a patch of sunlight on the rug. I’ll confess that I have ventured to Blue Cypress on several occasions for the expressed purpose of petting this cat. More often than not, I find myself purchasing a new book on the way out. This is shaping up to be one of those times; I had picked up A Guide to Picking Locks from out of the zine basket upstairs. “This is a popular one!” remarks the cashier as she slips my receipt behind the cover. “You know, we started carrying stuff from Microcosm after the owner saw their zines at Sister in Christ. Have you ever been there?” I tell her that no, I’ve never heard of Sister in Christ before. “Oh, you should check it out!” she says. “It’s a record store on Magazine Street, but they sell a lot of other cool stuff. It’s a great community spot.” I promise her that I’ll drop by sometime. As I leave, she calls out after me, “tell them that Blue Cypress sent you!”