Ban the boredom: Sisters in Christ, the rebels on Magazine

Editor’s Note: May we Mayke a suggestion? No, our suggestion is not that we stop using cringeworthy puns, but it is to think ahead! We know what’s coming: the summer. The time when the air is heavy, the tourists have abandoned ship, and us locals are left to enjoy our city, heat and all. That’s where we come in! All the month of May we are going to prepare you to “Ban the Boredom” by giving you the best places, the best restaurants, and the best event, but since we never do anything “normal” at ViaNolaVie, we are basing these suggestions around various psychological states! If you’re a total introvert, we’ve got a spot for you! If you have a disability, we’ve got the places that actually don’t discriminate and let you get down the way you want to get down. We’ve got something for everyone because New Orleans is the city for everyone, especially those who don’t like to play by the rules. That’s why writer Claire Stephens focuses on Sisters in Christ. 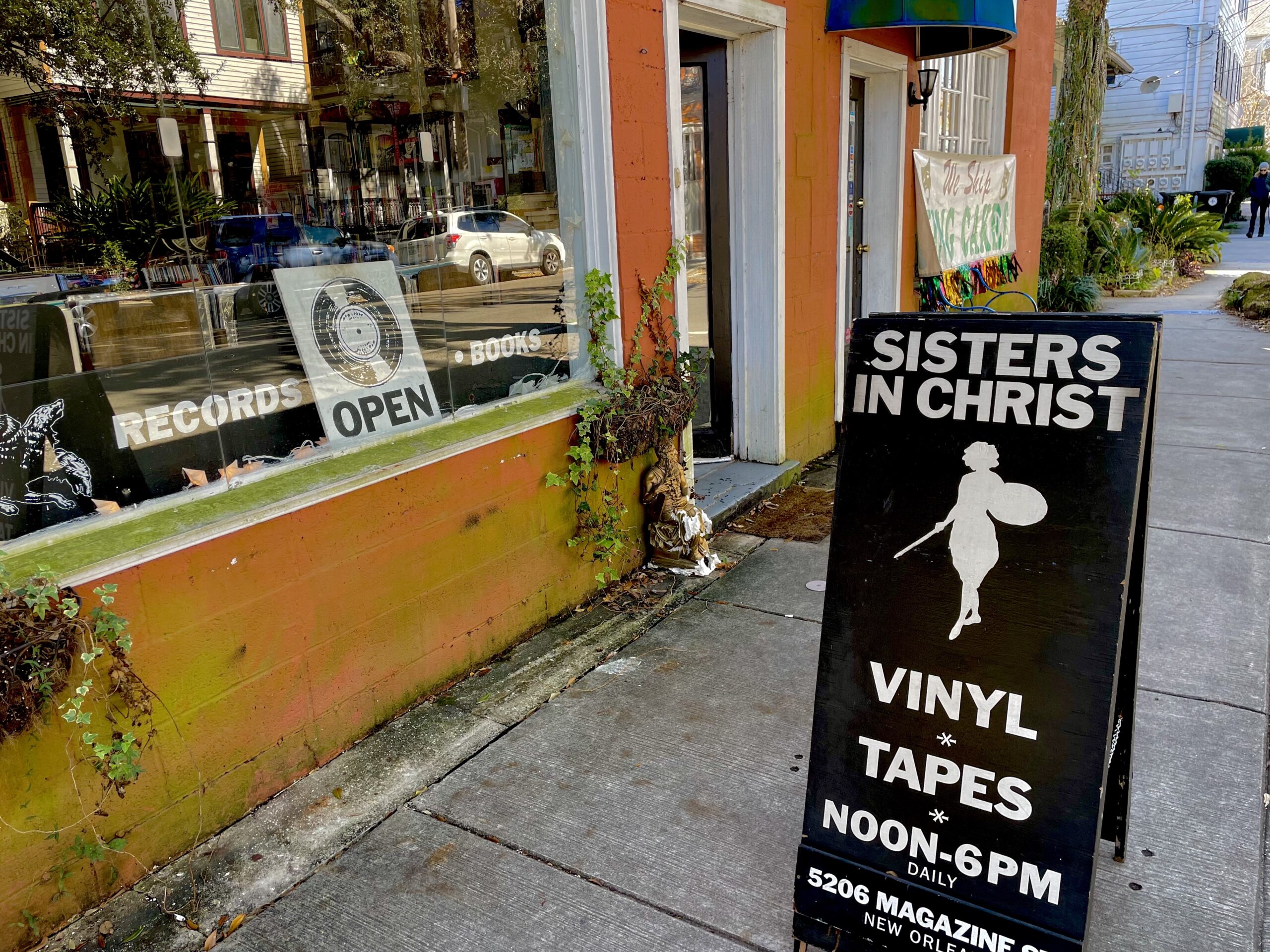 It’s a quiet Sunday afternoon beneath the drooping Uptown oak trees. Tucked between their branches, on the corner of Dufossat and Magazine, hangs a creaking wooden sign embossed with a howling three-headed dog, a tribute to Cerberus, the guardian of the underworld in ancient Greek mythology. A black sandwich board blocks a patch of the uneven sidewalk:

This shop is where Bryan Funck spends most of his days when he’s not in the studio or rehearsing with his critically acclaimed sludge-metal band Thou. Stepping over the threshold, a speaker precariously balanced on a wooden stool plays whichever underground gem of an LP Funck has discovered recently.

Though the name is misleading, Sisters in Christ is not affiliated with the Catholic church, despite its appropriation of Catholic aesthetics. The walls are littered with crucifixes and portraits of Jesus Christ spliced together with prints depicting bondage and sadomasochistic fetishism, and tote bags with slogans like “Join the Punks” or “God Hates Cops” for sale. Crates upon crates of loosely cataloged vinyl wind around the ornate antique couch nestled in front of the check out counter like pews facing an altar. Often, punks gather on this central sofa, harmonizing their laughter with the music like they’re sitting in a friend’s living room.

The towering bookshelf is stuffed with titles ranging from classics like Emily Brontë’s Wurthering Heights to independently published paperbacks such as Anarchy: Arguments For and Against or Femme Occult: Chapters of Czech Magic, Mystic of the Witch. Atop the shelves sit dozens of magazine racks filled with an array of local zines such as Essential Oils to Destroy the Patriarchy and Don’t Fight Juvenile Delinquency, Join It! whose bright bindings bloom from the clutter like paper bouquets. You can imagine how frequently Magazine Street’s typical bourgeoise patrons or prim elderly women walking home from their Sunday masses stumble into the store looking for Gospel records or family-friendly tapes, only to be greeted with “Randy”, a poster of a young man strapped to an electric chair, his genitals exposed and a look of equal parts fear and stern arousal spread across his face. The initiated find this pretty amusing. 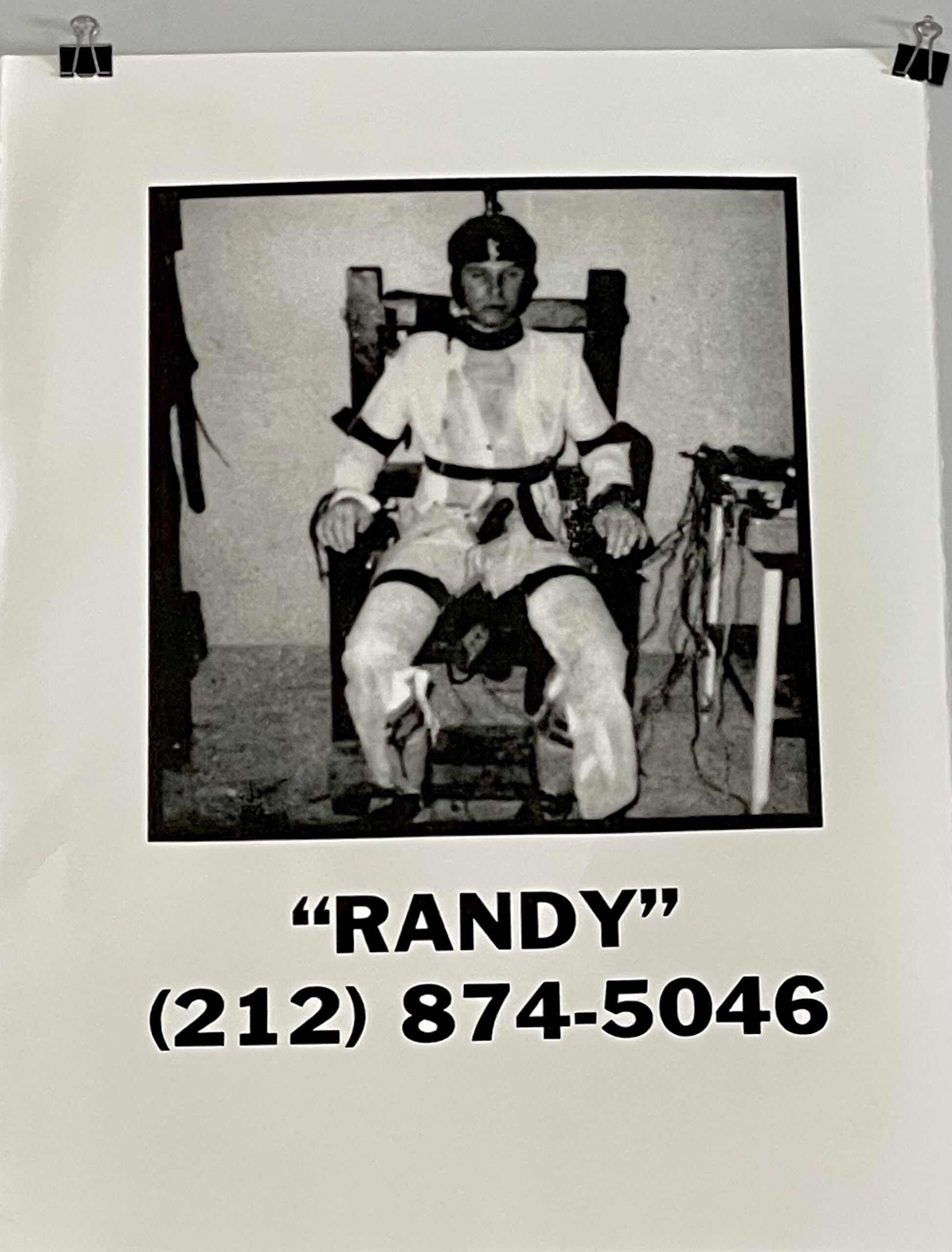 Owner Bryan Funck is a New Orleans local who has been active in the New Orleans DIY-punk show scene since his high school years in the mid-90’s. He’s played in a variety of punk and metal bands, and started his own online database of local underground events called NOLADIY in the early days of the internet. Sisters in Christ began as a popup record store/zine distro in the side room of Freret music venue Gasa Gasa, inspired by his time working at the beloved radical book collective Iron Rail post-Katrina. Funck has described himself in interviews as being “of the PC, weenie, soy boy, cuck, fucking whatever” stereotype as a staunch leftist and anarchist. In 2015, Sisters in Christ found its permanent home on Magazine Street, becoming a hub for local alternative music and publishing.

Someone just abandoned a crate of used records outside the shop, and Funck carefully parses through them, discarding the “bullshit” and setting aside the promising titles for methodical play-testing later. The shop is known for carrying a wide selection of lesser-known hardcore, punk, experimental, and indie LPs, with local artists pushed to the front of the stacks. The “Must-Haves” section contains the highest density of big-name artists, with selections such as Bikini Kill, Nirvana, Patti Smith, Black Flag, Gorilla Biscuits, and Kate Bush making the cut. The rise of digital music has made vinyl a novelty, and at other record stores in the city like Peaches, a new LP will go for anywhere between forty to one hundred dollars. Each of Sisters in Christ’s records, enclosed in crisp shrink wrap, is listed for around ten to twenty dollars, seemingly unconcerned with turning a profit. 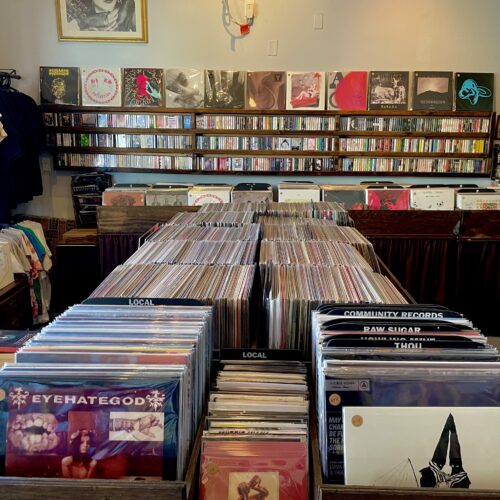 Main stacks in the front of the shop

I’m inspecting the “New In Stock” section when I find a copy of teen idol Olivia Rodrigo’s Sour. Holding it up with a puzzled look, Funck calls out from across the shop, “Elizabeth at Blue Cypress had me order a copy for her daughter’s birthday, I figured someone else would want one.” He returns to the crate, inspecting the surface of a Marty Robbins singles album under the warm glow of a vintage lamp.

When it’s time to go on tour or record a new album with Thou, Funck employs an eclectic bunch to run the shop in his absence. There’s DJ Faeriegothmother, manager of alternative dive Banks Street Bar, friends of Funck whose art and music takes center stage within the sprawling inventory, the occasional bright-eyed college student, and metalheads willing to work in exchange for first pick of the new stock. Employment at the shop is not the typical slog of retail where employees work long, rigid hours under the watchful manager’s eye. Each employee at Sisters is given a key to the shop, their only clock in mechanism, and opens in the morning without reporting to a supervisor. They will run the store alone, their only instructions posted on worn green paper. 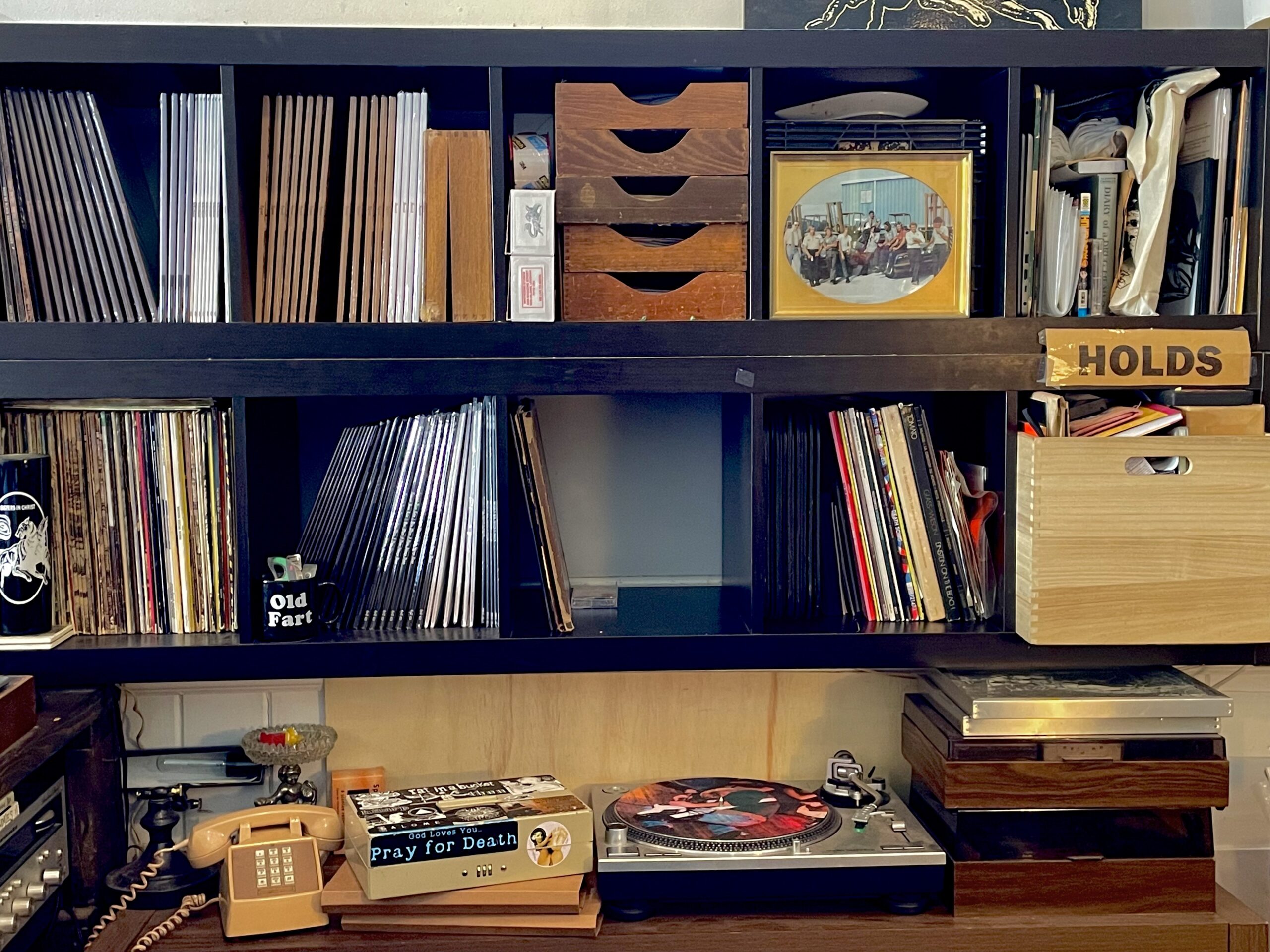 A view behind the counter (photo by Claire Stephens)

Employees have scribbled notes in the margins such as “✩ water plants if they’re dry” and “ Tilloch wants to work – [phone number]”. The instructions conclude:

If you have any questions at all please hit us up. Feel free to listen to any records or tapes in the shop. Hang out, invite your friends, have a nice time.

Schedules are organized in a group text where employees offer up availability instead of unpredictable shift assignments. Whereas the Gap might require a worker to appear busy and friendly in the job description, there’s no such requirement here, and often employees will idly browse the stacks alongside customers. It’s not uncommon for patrons to have to wait until the end of a friendly conversation to check out. 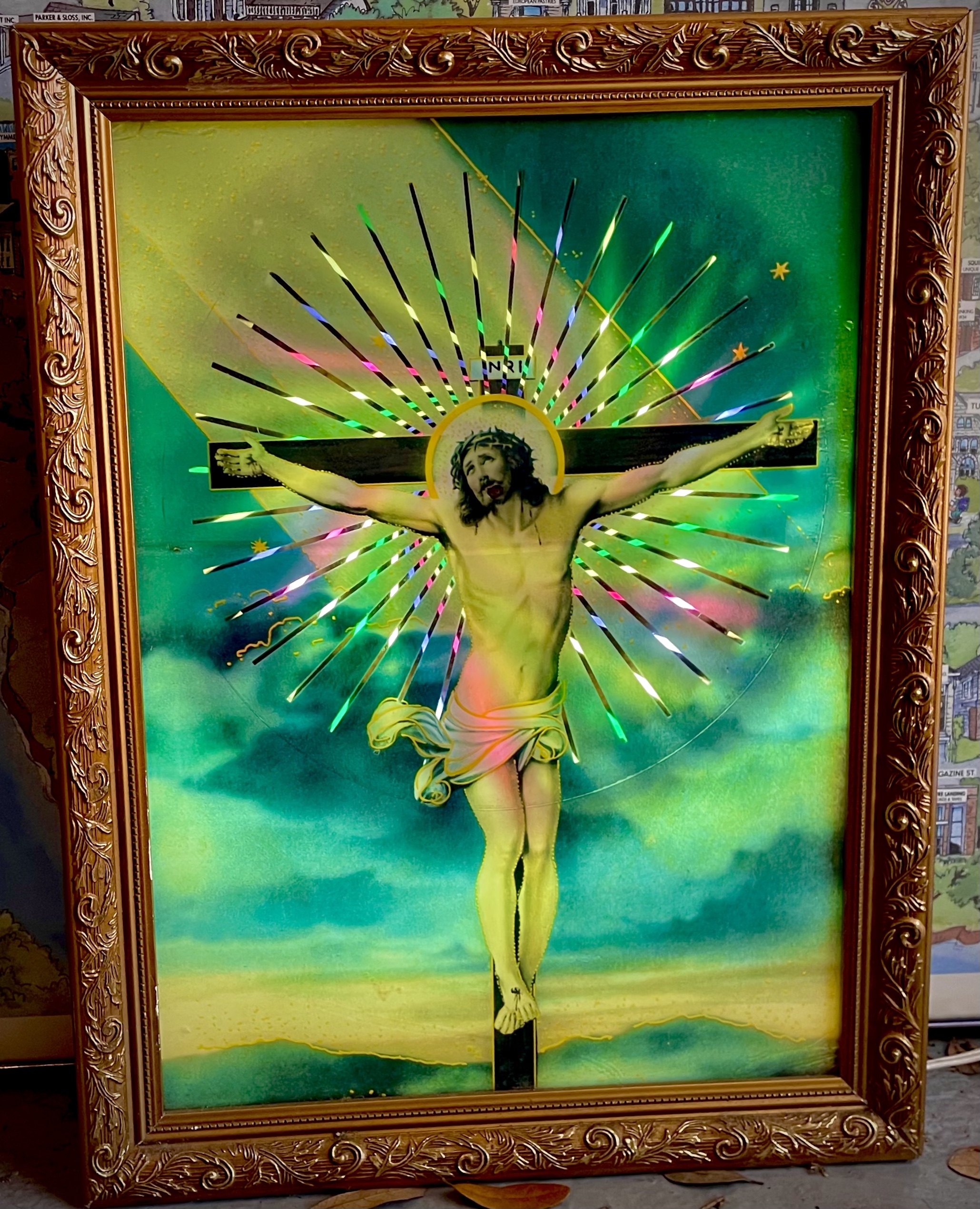 Patrons frequently ask if the LED Jesus portrait is for sale. It is not. (photo by Claire Stephens)

Yet despite these unorthodox operations Sisters in Christ promptly opens at its posted time of 12pm each day, and while lingering patrons may still be met with glares from the employees come closing time, the lights of the psychedelic LED Jesus portrait flicker until the clock hits 6pm. The trash can behind the counter never gets too full, the floors never too grimy. The girl behind the counter with her nose buried in a discarded Nietszche Reader will welcome an interruption to dig through the stacks with a patron, finding them the perfect album for a birthday gift or romantic evening.

Emma Goldman defines Anarchism as a, “social order based on the free grouping of individuals for the purpose of producing real social wealth,” stabbing back at the assumption that anarchism and the radical left orient their politics around chaos, social disorder, and violence. Instead, she posits that anarchism is the voluntary gathering of people who all want to produce a different kind of wealth, measured not by capital, but by how it enriches our experience of the world and one another. In our contemporary moment, filled with the crushing tide of consumer capitalism, rampant job dissatisfaction, and festering political tensions, we are often given a choice: to submit to the broader forces of politics and culture or transgress them. Sisters in Christ’s entire ethos relies on this idea of transgression, juxtaposing the holy with the vulgar, and proudly displaying and practicing radical ideas in the tradition of its punk roots. For those who feel a burgeoning discontent for society, who feel as though they can’t find a place in the ever-increasing demands of modern life, the shop is an oasis of art, music, and literature that dares to welcome its visitors into a revolutionary alternative. And they truly put this alternative into practice, showing us that even when we are faced with grand power structures, a community of individuals can come together and create something subversive and not merely functional, but harmonious. If Goldman time traveled to present day New Orleans and found herself on this cracked and tranquil corner, she might find herself laughing along with the punks on that sofa.