Editor’s Note: May we Mayke a suggestion? No, our suggestion is not that we stop using cringeworthy puns, but it is to think ahead! We know what’s coming: the summer. The time when the air is heavy, the tourists have abandoned ship, and us locals are left to enjoy our city, heat and all. That’s where we come in! All the month of May we are going to prepare you to “Ban the Boredom” by giving you the best places, the best restaurants, and the best event, but since we never do anything “normal” at ViaNolaVie, we are basing these suggestions around various psychological states! If you’re a total introvert, we’ve got a spot for you! If you have a disability, we’ve got the places that actually don’t discriminate and let you get down the way you want to get down. We’ve got something for everyone because New Orleans is the city for everyone, including pirates. That’s why writer Jamie Sullivan takes a look at a potential site for pirate meetings, voodoo rituals, and piano singalongs, seeing as Lafitte’s manages to exist in a limbo between past and present, carving out its own niche on Bourbon Street. 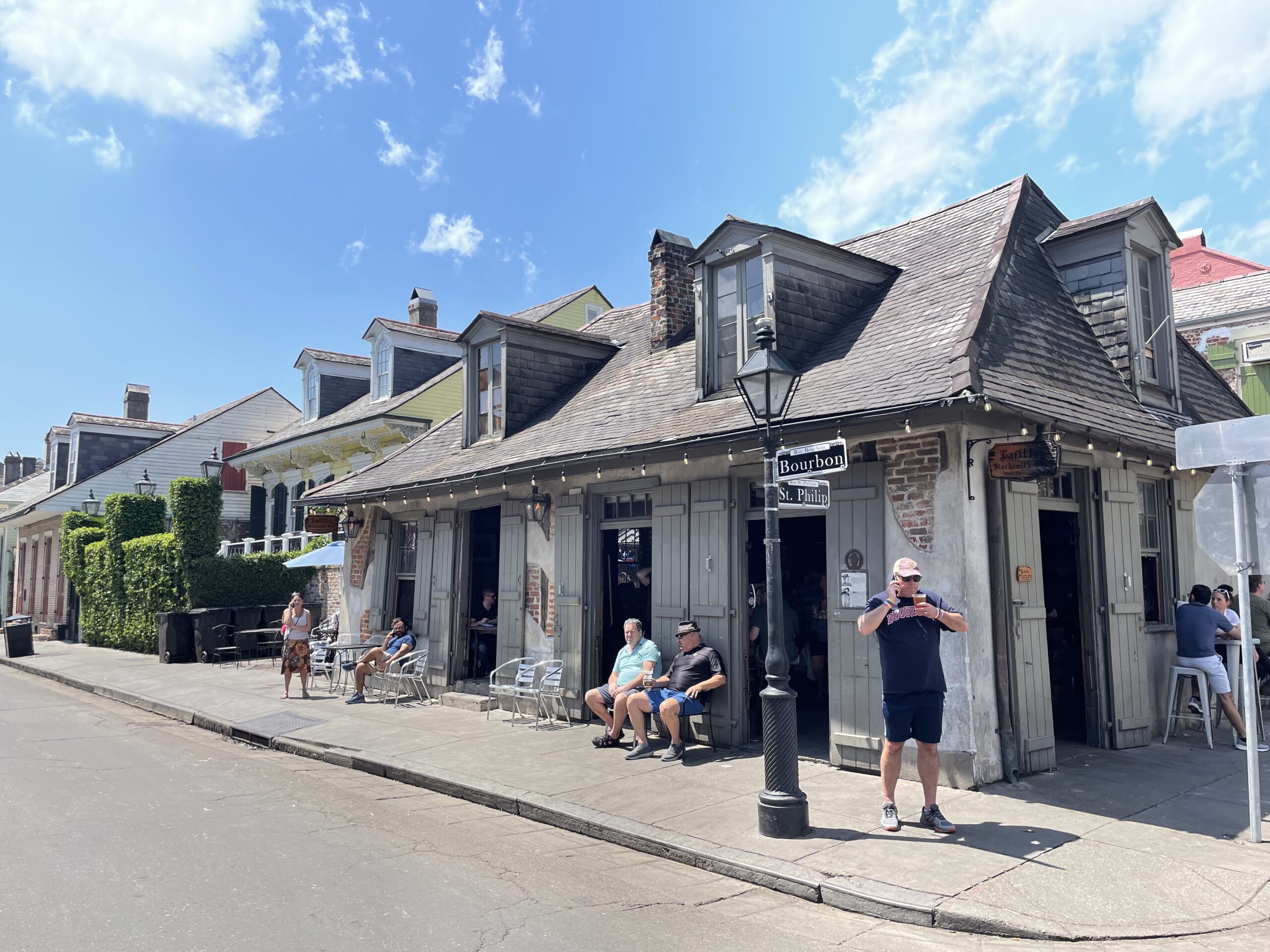 Situated in the heart of the Vieux Carre,  Lafitte’s Blacksmith Shop, located at 941 Bourbon Street, was erected sometime between 1772 and 1791. The building is an excellent exampl

e of a French Colonial Louis XV townhouse of briquette-entre-poteaux construction. However, the building itself, with its dilapidated windows, weathered roof, and worn facade consisting of cracking brick, peeling wood, and perhaps newly added concrete, is rather unremarkable compared to the other massive clubs and bars that exist on Bourbon Street.

Although Lafitte’s is registered as a historical landmark by the National Historic Landmark Program, the legend surrounding the building and Jean Lafitte is perhaps the bigger selling point. According to the website and local legend, the building is reputed to be the oldest structure used as a bar in the United States. Plus, the property is believed to have been owned and used by Jean and Pierre Lafitte, French born pirates, as a New Orleans base for their Barataria smuggling operation.

The actual facts are, in truth, questionable. However, the legend disbelief disappers when the dimly lit candles that rest on the tables and mantlepiece cast shadows over the stone floor and brick walls, engulfing visitors in the mysterious history of New Orleans past.  The building, the location, the ambiance, the aesthetics, the legend, all of these elements culminate to be more than the sum of their parts and transport visitors back in time.

This concept of the impact of physical surroundings on customers has been investigated already. The physical surroundings can even reinforce or challenge traditional bar “rituals.” Mary J Bobin writes that individuals react to places with two general, and opposite forms, of behavior: approach and avoidance. Approach behaviors include behaviors such as stay, explore, work at, affiliate, or spend money.

Speaking from an architectural background, Lafitte’s certainly encourages approach. The bar is humble, but there is always a gap or two for visitors to grab a drink. The lighting is low and the music isn’t amplified, which always encourages me to poke my head around the corner to see what characters occupy the cozy alcoves.

“Researchers have emphasized the emotion eliciting or affective qualities of environments, suggesting that environments can be viewed as aesthetic stimuli capable of eliciting affect… Kaplan concluded that preference for or liking of a particular environment can be predicted by three environmental dimensions: complexity, mystery, and coherence (Robin).”

The visual aesthetics of Lafitte’s, the visual quirks and principles of the bar, are understated yet powerful enough to invoke these “approach behaviors” and eliciting stimuli. The (essentially) sole source of light in the bar, candlelight, illuminates the interior while conversation spills out into the street. Because of this, this truly feels like a dive bar that the Lafitte brothers might actually frequent and very well could be unchanged (save for the electronic daiq

uiri machines that produce the infamous “Purple Drank.”) There is one TV (that is never on), two paintings of a pirate ship, and photos of celebrities who have visited, but beyond that, the exposed, weathered brick walls are barren.

The “sonic aesthetics” of Lafitte’s tends to revolve around one thing: the piano bar. The piano itself is surrounded by chairs and has a table over it, usually covered in drinks. There’s a small lamp so the piano player can see what they’re doing and a small sign, usually the player’s Venmo, above the chair. It might as well be the beating heart of Lafitte’s on a weekend night, drawing people deeper into the heart of the bar to join in the chorus of (usually bad) singing. Just like the visual side of things, the piano bar allows Lafitte’s to exist not fully in the past but not fully in the present either. You might hear “House of the Rising Sun” followed by Olivia Rodrigo or Miley Cyrus. I’ve seen nights where tourists take out their phones to record or Venmo, placing Lafitte’s in “present day,”and other nights where there is not a phone in sight, rooting the bar and the people squarely in the past. The concept of “dueling pianos” came from 1890s ragtime, where piano players would “duel” for the audience’s attention and tips. That format continued to be tweaked to encourage more audience participation, and now piano bars are found commonly throughout the country. There are more famous piano bars on Bourbon Street, but the ambiance inside Lafitte’s propels it to be something special, perhaps so

mething of another time.

There is certainly mystery to Lafitte’s. As mentioned previously, the candlelight keeps the interior cozy and shrouded in mystery. The interior 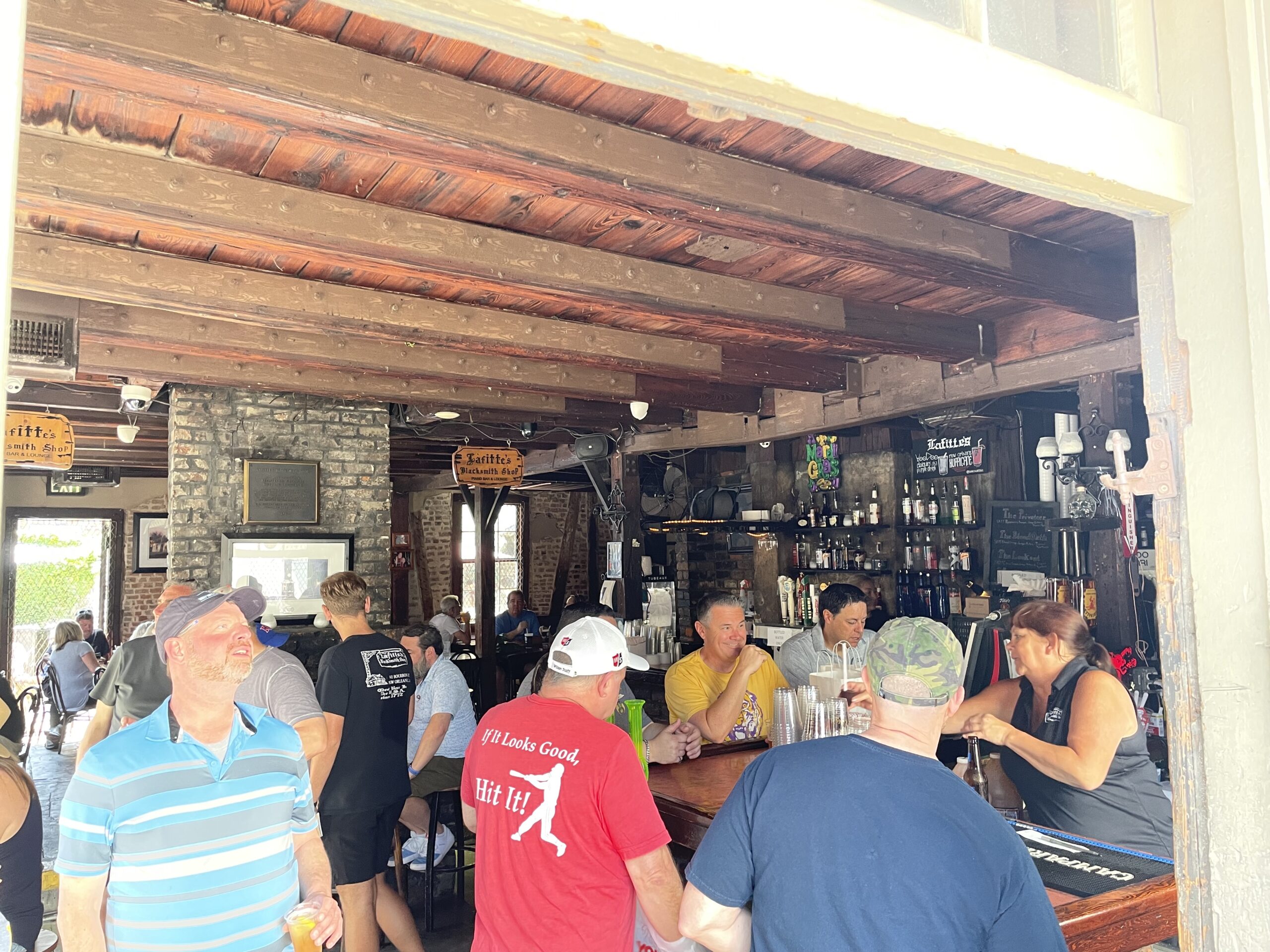 is small and the bar is even tinier, but the spatial geometry and lighting makes it seem like there is always something new to discover beyond the next corner. It very well could be Jean and Pierre Lafitte discussing their plans to help General Andrew Jackson defend New Orleans in the War of 1812, or enjoying the spoils of their reported millions of dollars of stolen loot. Or perhaps a Voodoo ritual, like the one described by Special Officer Long on Marais Street in July 30, 1863.

“When he and some other officers entered the building he found about forty naked women-all colored except two-who were dancing the Voudou dance and performing rites and in- cantations pertaining to that ancient African superstition yclept Voudouism. In the center of the room there was a vessel filled with a motley mixture . . . of a semi-fluid character, ornamented with curious unnameable substances. From the vessel a number of burning candles protruded, and around these lights the Voudou sisters danced.”

While the idea of time traveling in Lafitte’s will have to be based on empirical research, it is not hard to find a night in which a group of people are recreating this very scene. Belligerent, (probably) clothed people dancing around the piano bar, illuminated by candlelight, with purple drank in hand. By playing into the legend and focusing on the bar aesthetics, Lafitte’s manages to exist somewhere between past and present, carving out its own niche on Bourbon Street.

The allure of the “Evil Green Menace” myth
Food and Drink