Ban the boredom: Z’otz Cafe: Where creativity and productivity intertwine

May we Mayke a suggestion? No, our suggestion is not that we stop using cringeworthy puns, but it is to think ahead! We know what’s coming: the summer. The time when the air is heavy, the tourists have abandoned ship, and us locals are left to enjoy our city, heat and all. That’s where we come in! All the month of May we are going to prepare you to “Ban the Boredom” by giving you the best places, the best restaurants, and the best event, but since we never do anything “normal” at ViaNolaVie, we are basing these suggestions around various psychological states! If you’re a total introvert, we’ve got a spot for you! If you have a disability, we’ve got the places that actually don’t discriminate and let you get down the way you want to get down. We’ve got something for everyone because New Orleans is the city for everyone! Up next, what happens if you’re not a coffee drinker but love the coffee shop feel? Writer Kate Hershey has the Z’otz spot for you! 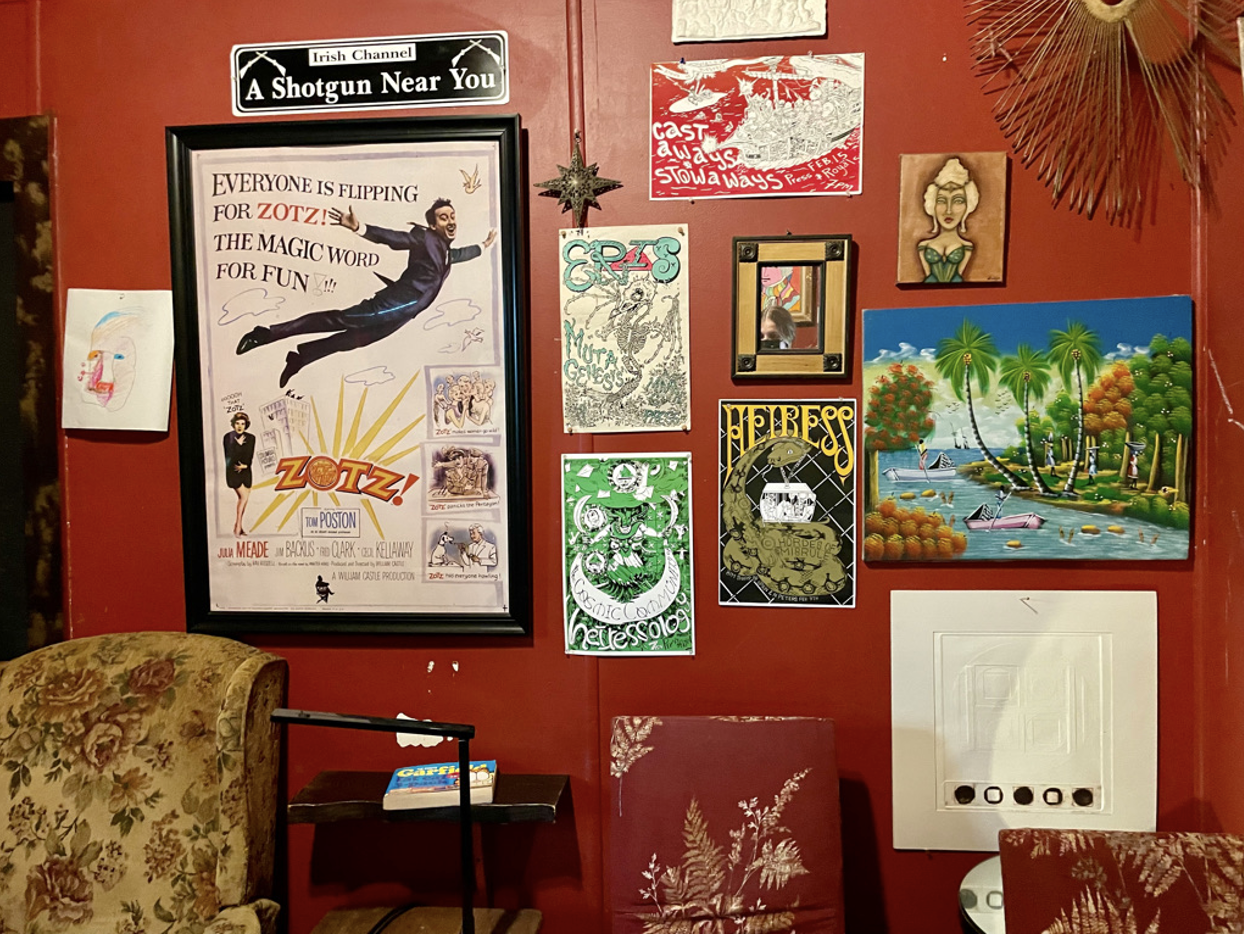 I don’t drink coffee. I have tried and tried, but I just can’t seem to get past the bitterness.

“Wanna grab coffee?” is just about the most common social invitation out there, being that there are over 37,000 coffee shops in the United States. The first time I invited a friend to Zot’z Café at 8210 Oak Street, she was confused why I simply ordered a pastry upon entering, asking, “didn’t we come here for coffee?”

What she didn’t understand was that Z’otz was more than just your average coffee shop. “It’s all about the experience,” I told her.

She furrowed her brows, clearly confused by my semi-cryptic statement.  “Okay. Are we here to be productive?” she asks. The answer to this is a bit complicated. Though I do come here to be productive, what’s more important to me is why I’ve experienced productivity here that I haven’t been able to find anywhere else. I looked around at the skull paintings, crooked picture frames, mannequins wearing masks, and the unidentifiable Lego creation hanging from the ceiling. I felt motivated. 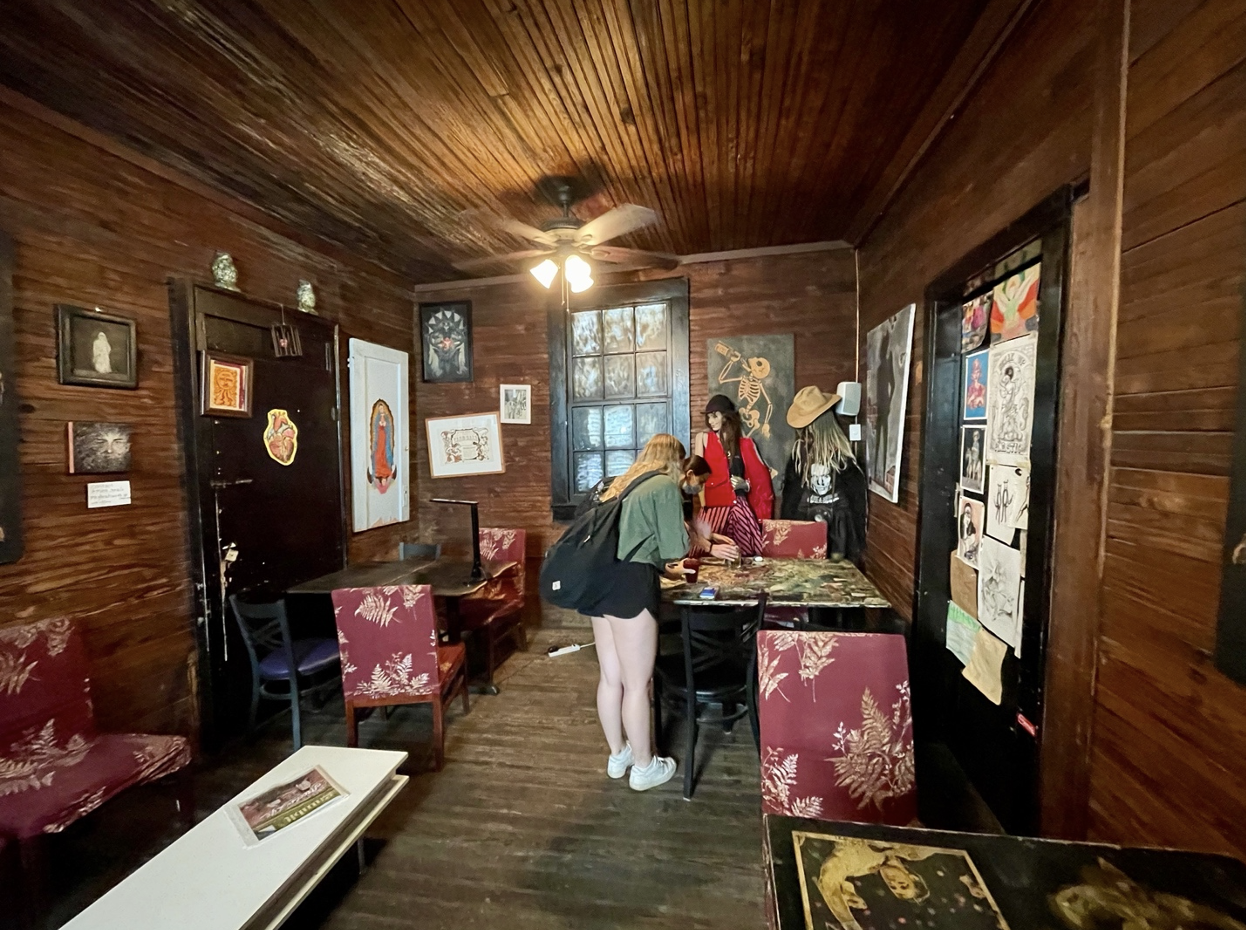 The wood-paneled room: One of three interior rooms at Z’otz

The spaces we choose to spend time in are quite important. Color psychology shows that the color of a room can elicit certain emotions. For example, blue rooms are correlated with peaceful feelings; yellow brings positivity and optimism; and orange promotes activity. Does this same idea extend to objects and décor? Predictably, it does. The interior design of a space is known to have a great impact on our mood and behavior and given the quirky and eclectic interior design of Z’otz, it’s no surprise that this space gets the mind flowing with out-of-the-box ideas.

According to Jane Benston, productivity is “structured and is all about moving forward, fast” (Benston 1). Productivity is often described as the opposite of creativity, which is usually associated with unstructured time that allows ideas to flow freely. However, they aren’t necessarily at odds with each other. When creativity is fostered, one is more likely to feel passionate about the task they are completing. Passion, or purpose, is incredibly important for productivity. In fact, research by Mckinsey suggests that seeing purpose and value is the single most important factor for motivation. So, let’s bring this back to Z’otz. For me, it’s the funky-looking mannequin with its white “maybe female” structure wearing a fedora and a mustache that lets me know that it’s okay to think in an unorthodox way. Once this unorthodox thinking starts, passion follows. 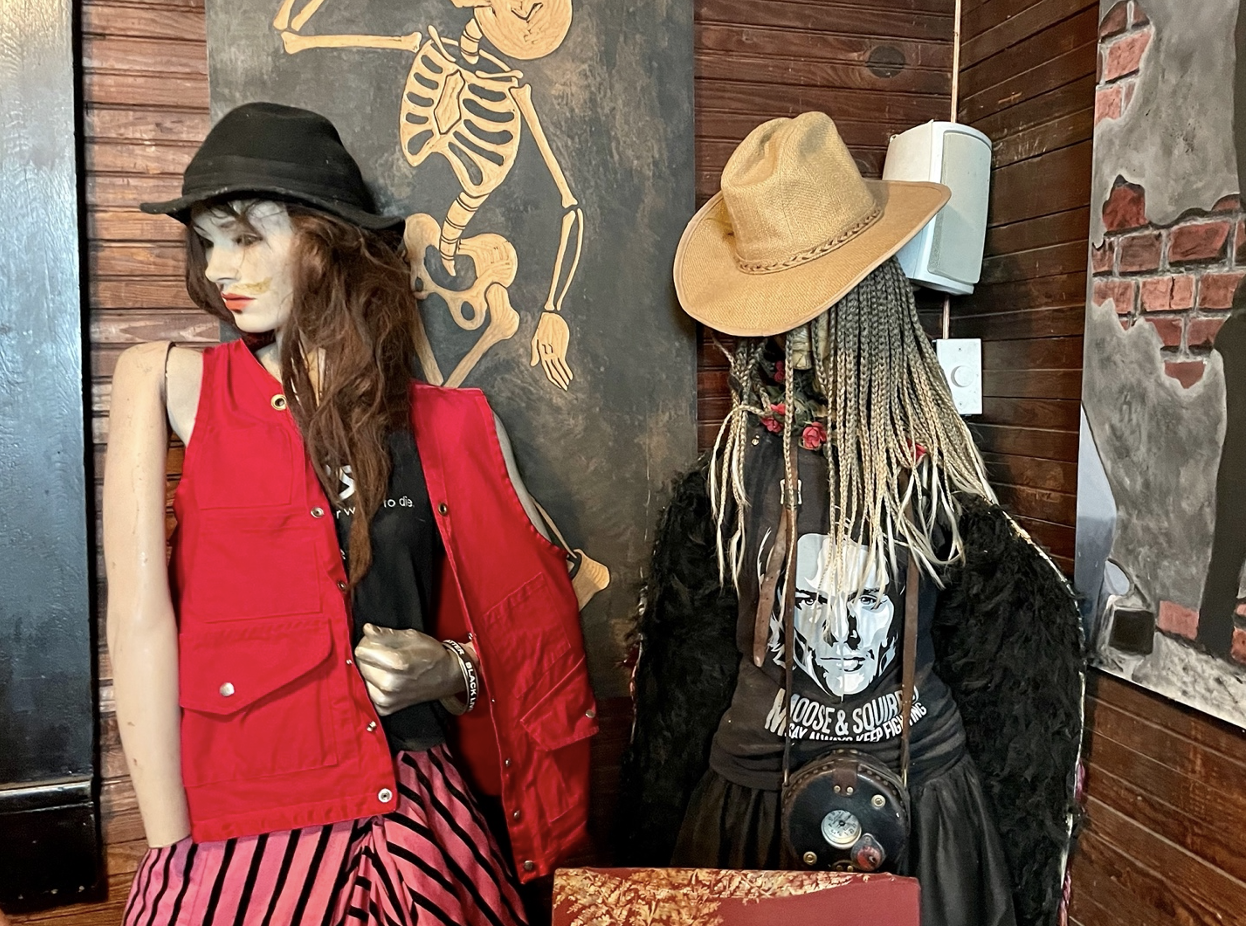 Two well-dressed mannequins, one wearing a fedora and mustache

Although the “weirdest” people are often the most creative, it’s conformity that humans lean toward. Solomon Asch’s famous experiments of the 1950s revealed just how common it is to conform to society’s standards. When shown one line and told to match its size with one of three other line options, (two of which were very clearly sized differently,) participants selected the wrong option about one third of the time when others in the group gave the wrong answer too. At Z’otz, conformity is the enemy. 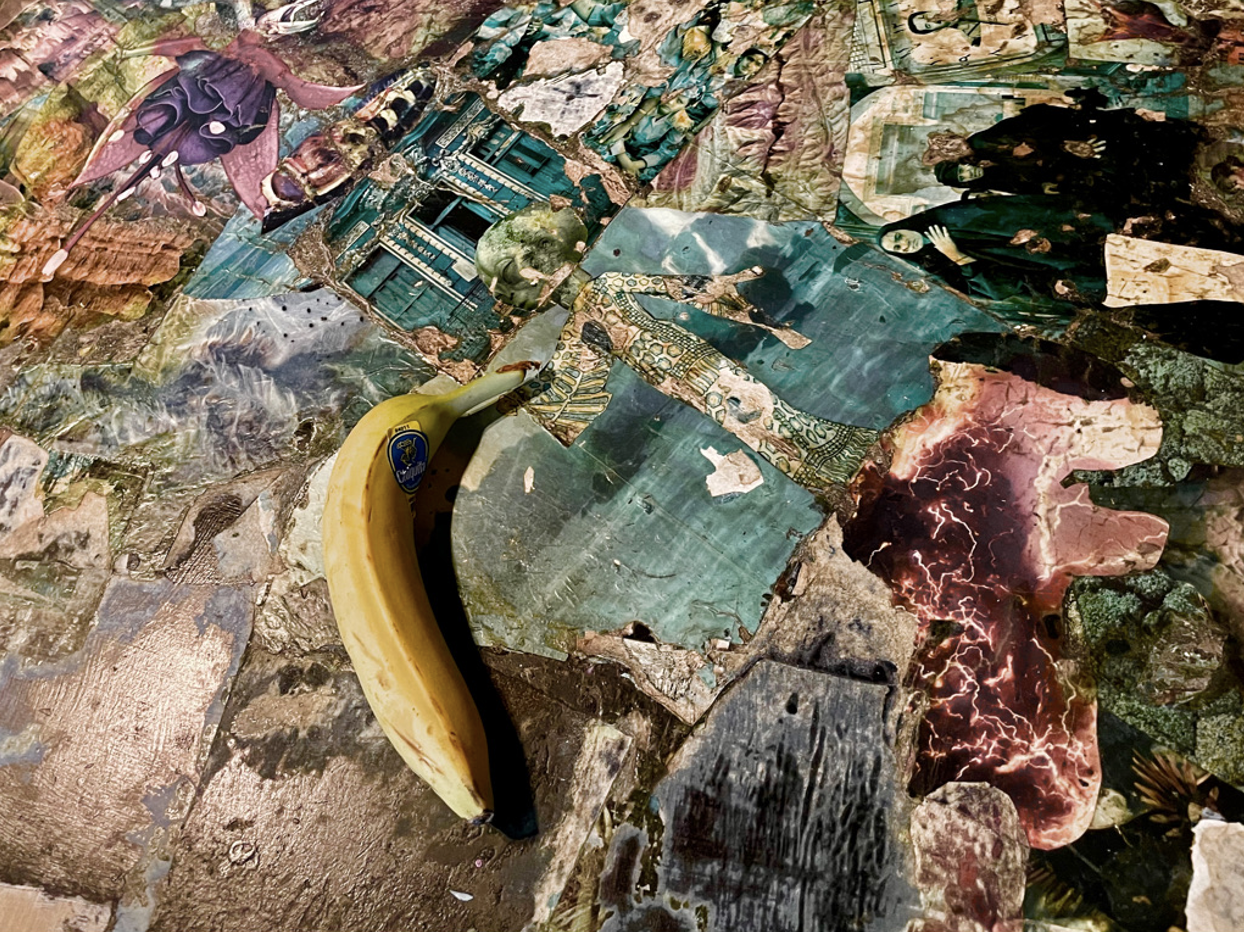 A colorful tabletop sure to inspire patrons

Take the employees for example; Nearly every time I’ve visited, the barista has been a man, a surprising fact as baristas tend to be women. Rather than wearing uniforms, they often show up to work in 90’s-esque t-shirts and baggy pants, wearing their piercings, tattoos, and individuality proudly.  The walls in one room are a grey-beige color with a cave-like texture, while the walls in the next room are wood-paneled. I’ll find myself sitting in a red, grandma-curtain-pattern chair, while my friend next to me is sitting in a simple old wooden chair. Whether it’s October 31st or mid-July, you can always find skulls, witches, and brooms around Z’otz. I truly believe that you would need to put in a concerted effort to not feel inspired by this atmosphere. 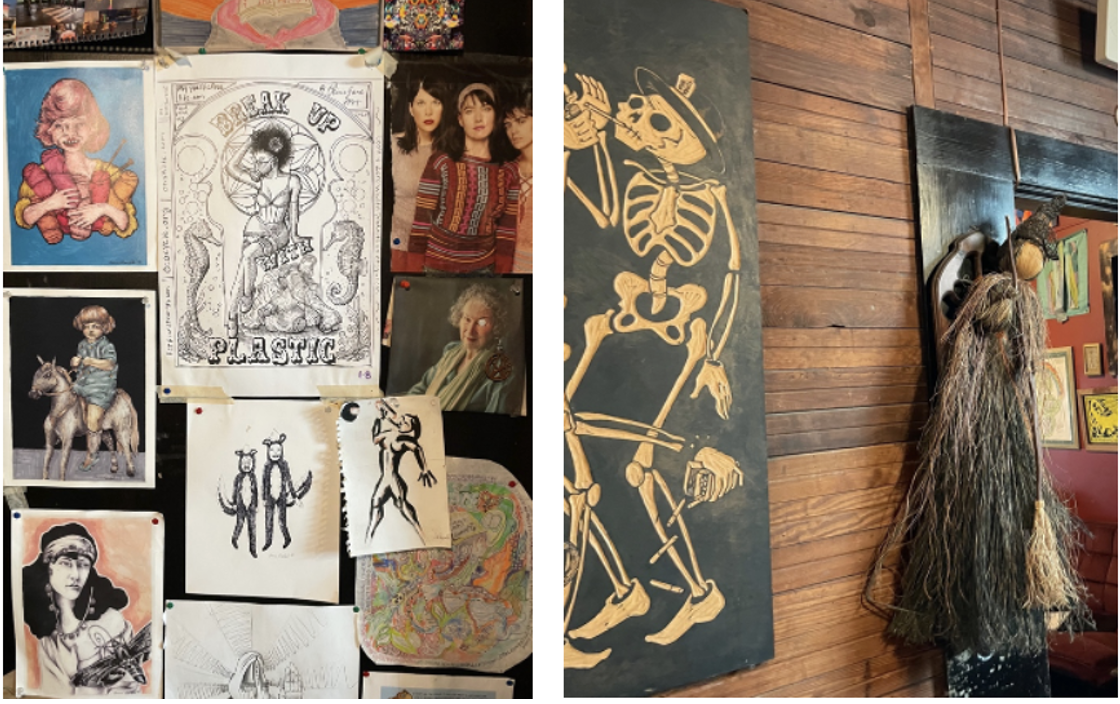 left: an artwork-covered door. right: A great example of the Halloween decor that can be found year round at Z’otz

Open from 7 am-1 am seven days a week, Z’otz encourages its patrons to stay awhile. These long hours allow plenty of unstructured time to get the juices flowing. Anyone in a creative rut can head to the jam-packed board game corner to play “Joking Hazard,” an amusing party game, with their friends. Those who don’t feel like socializing can browse one of the fully-stocked bookshelves and may choose to read Starbucked, a book exploring caffeine culture and the rise of the Starbucks Corporation. (Quite an ironic thing to read in a coffee shop.) Have you already spent time in the three indoor rooms? Need a change of scenery? Head to the spacious back patio where you can find ample seating, a futuristic, dystopian mural stretching across an entire wall, a statue of a foot protruding from a flowerpot, and all sorts of greenery. Indeed, the offbeat style doesn’t stop inside. Whatever you do, don’t let the screen-glare or occasionally iffy New Orleans weather steer you away from studying out back. Getting sunlight and fresh air is proven to boost the creative process, concentration levels, and positive emotions. Whether you’re working alongside the early-bird chirping in the morning or the latest cricket chirps of the night, you’re sure to find the drive to finish that task you’ve been dying to get done. 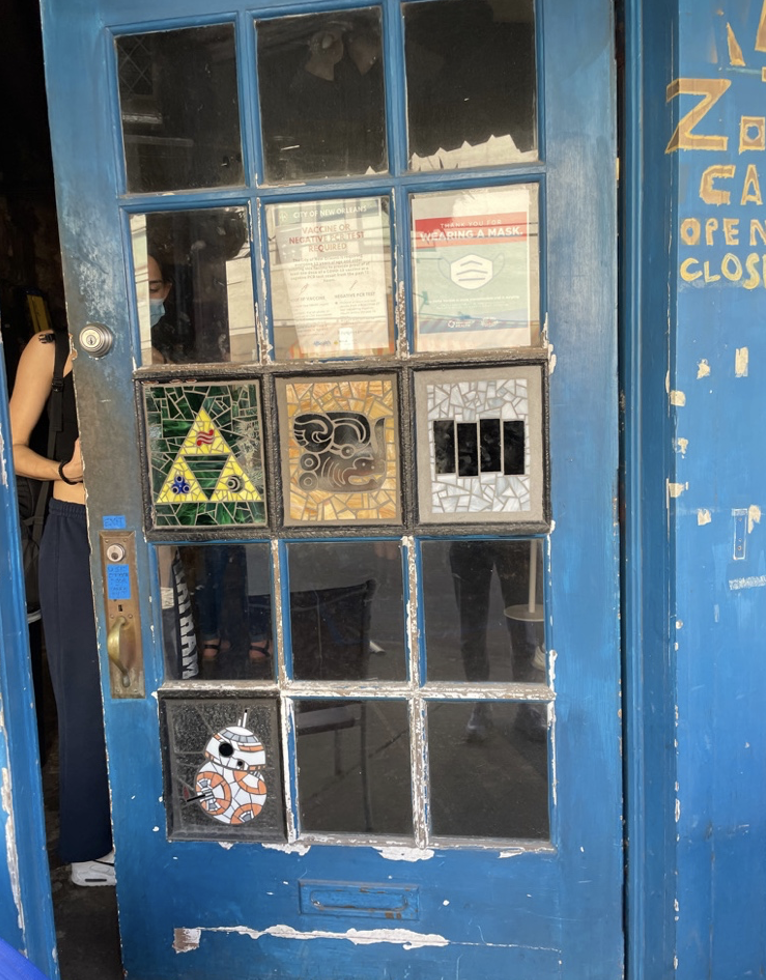 The entry door to Z’otz, which features mosaics like the Star Wars BB-8 droid

Z’otz deserves a lot of credit for the one-of-a-kind environment they’ve manufactured, but the customers play a role, too. I’ve seen patrons at Z’otz wearing anything from their pajamas, to Harry Potter socks, to long vintage dresses, aged anywhere from 16 to 66. I’ve overheard conversations about conspiracy theories, jazz music, and mythical creatures. Conversations like these are accompanied by soft, often Halloween-themed music, contributing to the pleasant ambient noise of Z’otz. Ambient noise is proven to increase creativity and productivity and can allow patrons to feel connected to others even if they showed up solo. As a place with a purple, skeleton-themed bathroom, a wide range of for-sale art by local New Orleanians, and a stained-glass window that makes out the shape of the Star-Wars BB-8 droid, it’s inevitable that people from all walks of life would be drawn here.