Ban the boredom: The unmatchable vibes that are Luca Eats

Editor’s Note: May we Mayke a suggestion? No, our suggestion is not that we stop using cringeworthy puns, but it is to think ahead! We know what’s coming: the summer. The time when the air is heavy, the tourists have abandoned ship, and us locals are left to enjoy our city, heat and all. That’s where we come in! All the month of May we are going to prepare you to “Ban the Boredom” by giving you the best places, the best restaurants, and the best event, but since we never do anything “normal” at ViaNolaVie, we are basing these suggestions around various psychological states! If you’re a total introvert, we’ve got a spot for you! If you have a disability, we’ve got the places that actually don’t discriminate and let you get down the way you want to get down. We’ve got something for everyone because New Orleans is the city for everyone! Up next, writer Molly Phillips looks into what makes Satsuma Cafe so blissful, besides from its garden-fresh food. 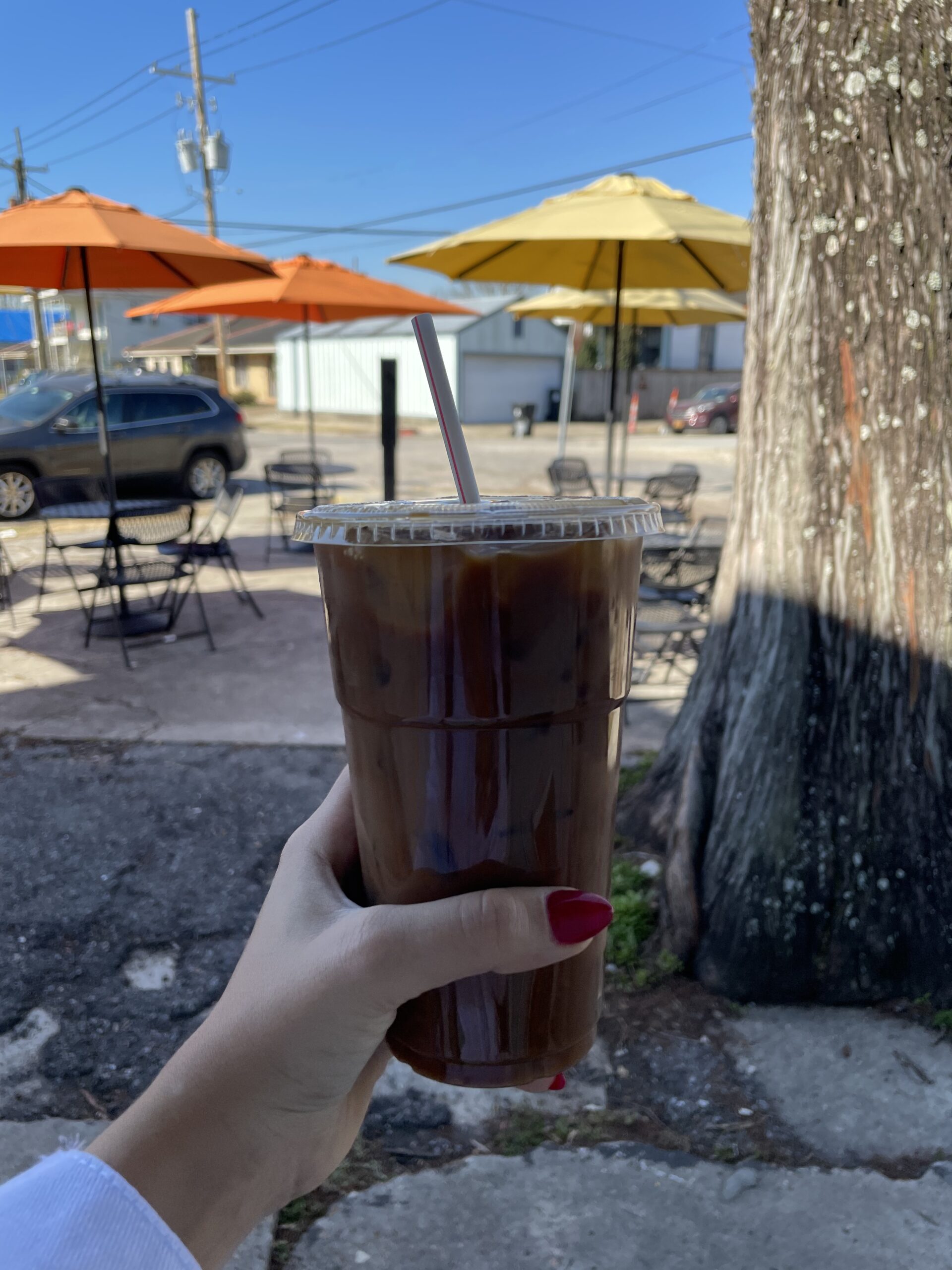 It is springtime, and the sky on a sunny day is a bright pale blue with a glimmer of gold from the beaming sun. The sky with such a lure boosts positivity throughout the day already, solely from the link between the stunning sky and a person’s mood. The grass is electric green freshly watered from the grey skies and rain from the pitch-black night before. This green provides sensations of relaxation and safety.

Colors affect human behavior in a myriad of ways due to the different cultural upbringings society experiences all over the world.

Sitting at 7329 Cohn St, New Orleans, at Luca eats, located next to a St. Mary’s Cemetery filled with Mausoleums and daily visitors, allowing for customers to feel “more intolerant of outsiders when reminded of their mortality”. According to research, “to cope with this anxiety, terror management theory suggests, our species evolved a suite of psychological defenses that allowed us to accept the unavoidable reality of death while assuaging our existential fears and to get on with the business of being alive.” Yet, with the array of colors captivating the eyes that surround Luca Eats, the oranges, the reds, and the blacks play a major role in the way the consumers’ minds may be affected when indulging in their twenty-minute meal. While this is true, the bright-colored decor and bubble-lettered signs help to keep minds alert, happy, and sometimes even experience feelings of hunger. The small, rectangular building with, bright orange umbrellas that surround the sidewalk section that Luca Eats took over, is part of their mission to: “not to sell a bunch of food, but to touch people’s souls and bring them together” which the owner, Darell, was so kind enough to share. Walking through the painted white, wooden, and lopsided, creaky door, there are hand-crafted sculptures, jewelry, glass-blown art, antique clocks, and chalkboards. After watching the step from the slight incline of the floor, hair blows back from the heavy gusts of wind that comes from their black and white, square industrial fans.

Color #1: The oranges – Luca Eat’s umbrellas bloom with the brightest shade of yellow. Six wide opened umbrellas towering over the blackholed tables help in portraying feels of stimulation yet exude means of friendship. This color represents energetic and strong feelings that help in confidence gaining within the brain. Tulane Junior, Julia Singer, mentioned to me while speaking to her that “[the] orange umbrellas radiate warm energy so it gives you the impression that its aesthetic is a nice outdoor seating area even if it’s cold and cloudy, regardless of the cemetery sitting right across the street”. She was more infatuated with the umbrellas which helped deviate her focus from the cemetery right next to her. 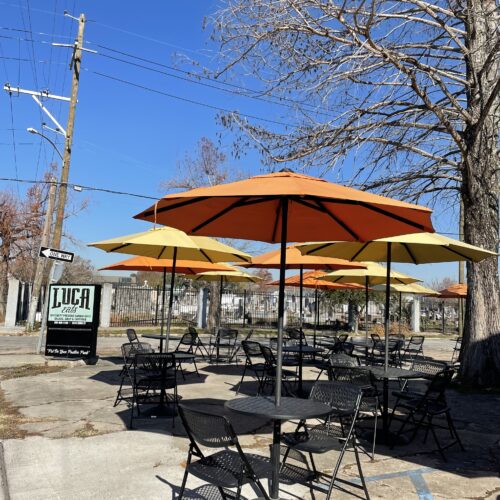 The effect of the orange umbrellas. Smiles, love, and home.

Color #2: The reds – The red straws that emerge out of the white paper surrounding give off feelings of life. Life is precious. It is way too short and unfortunately not timeless. The way these straws represent life is not only because of the color symbolism but also its relation to the way life works. When the straw is inserted into the cap and pushed down into the cup, the life is sucked out of the beverage in approximately 7 minutes. A sip so strong that the life of the beverage is so short. After speaking with Tulane sophomore Jess Teich, she stated that “the red straw is just a Luca Eats staple. When I get my favorite brown sugar cinnamon iced coffee from Luca, I am always sure to pick up a red straw on my way out. I’m not exactly sure what it is, but there’s something about the red straw that makes Luca’s coffee taste even better than it already is. Maybe it’s the nostalgia it brings; knowing that I’m about to take a sip of the delicious coffee that I’ve been looking forward to all morning.” Her love for Luca’s products influences her to feel a connection with the amenities, such as the straw, that come with her experience. 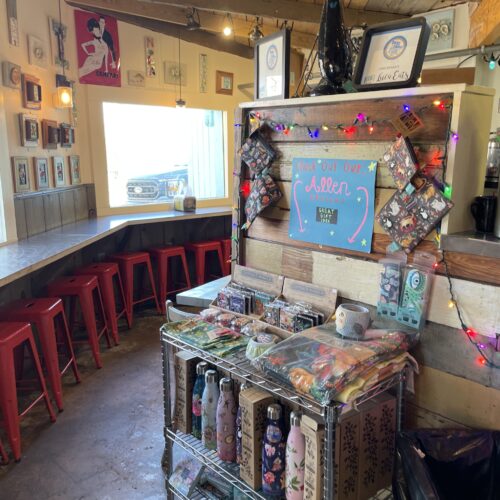 The red love seats that reside inside of Luca EATS.

As for the red stools, the love that exudes from the seats is immaculate. Red can mean love. The color that consumes the underneath section of Luca’s tables and the bar inside. The red stools complement the glass fusion artwork that is hung on the left side, when facing the kitchen, of the restaurant. Glistening from the sun through the window, illuminating the entirety of the building. This art helps to “create colorful light that is relaxing to the eyes and facilitate positive emotions through creation.”

Color 3: The blacks – The round hole-covered tables take over the tan sidewalk that Luca Eats resides on. These tables range from two to eight seats. Parties large and small have the ability to enjoy the goods Luca provides. Circling around the area of this sidewalk is a herd of black crows. A Tulane sophomore male who asked to remain anonymous discussed with me that the black crows and the cemetery were and are never a bother to him. He even said that he barely notices them so it does not negatively affect his experience at Luca Eats.

But, according to a sophomore at Tulane, Molly Ginsberg, believes that “it’s an eerie feeling but hard to explain.” She told me they are not too distracting but definitely notable. These black crows seem to swarm the streets that surround the building but do not bother the happy customers like the anonymous male and Ginsberg. From a mystical or spiritual perspective, the meaning behind the black crow is that they “show up to let you know that there are spiritual shifts happening around you and remind you to pay attention to the spiritual messages that are sent to guide you. They represent transformation, cycles, psychic tools, and insight into unseen realms. Crows are problem solvers and can help you tune into a solution when you are faced with a challenge”. As someone who recently experienced an unfortunate death of a best friend and also is an avid Luca coffee drinker, I find these crows to be a sign that my loved one is there and brings me more positive thoughts and feelings of connection rather than morbid memories. With Luca eats, especially on the weekends, having a line to the edge of the black semi-paved road nearly touching the cemetery, it is proven that “many burial sites have been chosen because they are high-energy environments” which Luca being a neighbor, truly fulfills this idea.

Even though Luca obtains this atmosphere that can resemble mysterious concern according to Ginsberg, her friend Jordyn Apfel who was with her during the interview, could not help but mention her point of view on the way the coffee makes her feel and how it tastes to her. Apfel stated that “the quality of the coffee is like no other. It tastes so smooth while also having such a strong and distinct flavor. It is never watered down and always satisfies my caffeine craving while also tasting like a dessert.“ According to research, “anxiety loves sugar.” While Apfel went on describing her love for a nice sweet, it related back to an article that describes the way people find comfort in what they indulge in desserts, and for her, Luca does the trick. Apparently, “sweets and decadent meals are often associated with vivid memories of food at social gatherings, such as holidays, parties, and family get-togethers,” thus validating her feelings of comfort at Luca Eats.

Even if this setting gives off ghostly vibes, people have come together, seen from observation, and has given me a sense of community. Onlookers have seen friends sit at the black, holed tables and discuss their weekends or days prior, spilling all of their latest tea. Families have come and brought their kids as they run in circles and pet the dogs that can be witnessed when sitting to the left of the white Luca door just outside. A couple sat down, sharing a meal while drinking their coffee together holding hands reaching across the circular table two down from the area filled with the puppies and crowding kids. These onlookers, like myself, come and observe and enjoy the sense of being alone and allowing for your brain to recharge and reset itself in the most positive of ways.

It smells like fresh air that helps release that unnecessary stress that has built up inside me when I go to Luca Eats. It even smells like bacon, egg, and cheese on a hot press from certain angles. But to me, there is no better feeling than holding that steaming sandwich in your hands, pulling the french bread apart, and watching as the cheese stretches under your lips.