Editor’s Note: May we Mayke a suggestion? No, our suggestion is not that we stop using cringeworthy puns, but it is to think ahead! We know what’s coming: the summer. The time when the air is heavy, the tourists have abandoned ship, and us locals are left to enjoy our city, heat and all. That’s where we come in! All the month of May we are going to prepare you to “Ban the Boredom” by giving you the best places, the best restaurants, and the best event, but since we never do anything “normal” at ViaNolaVie, we are basing these suggestions around various psychological states! If you’re a total introvert, we’ve got a spot for you! If you have a disability, we’ve got the places that actually don’t discriminate and let you get down the way you want to get down. We’ve got something for everyone because New Orleans is the city for everyone! Up next, have you heard the song “Take Me to Church,” by Hozier? If not, take a few minutes and listen, and then dive writer’ Max Dambach’s peace on a way to embrace boredom and find stillness within the walls of St. Mary’s Assumption Churce. 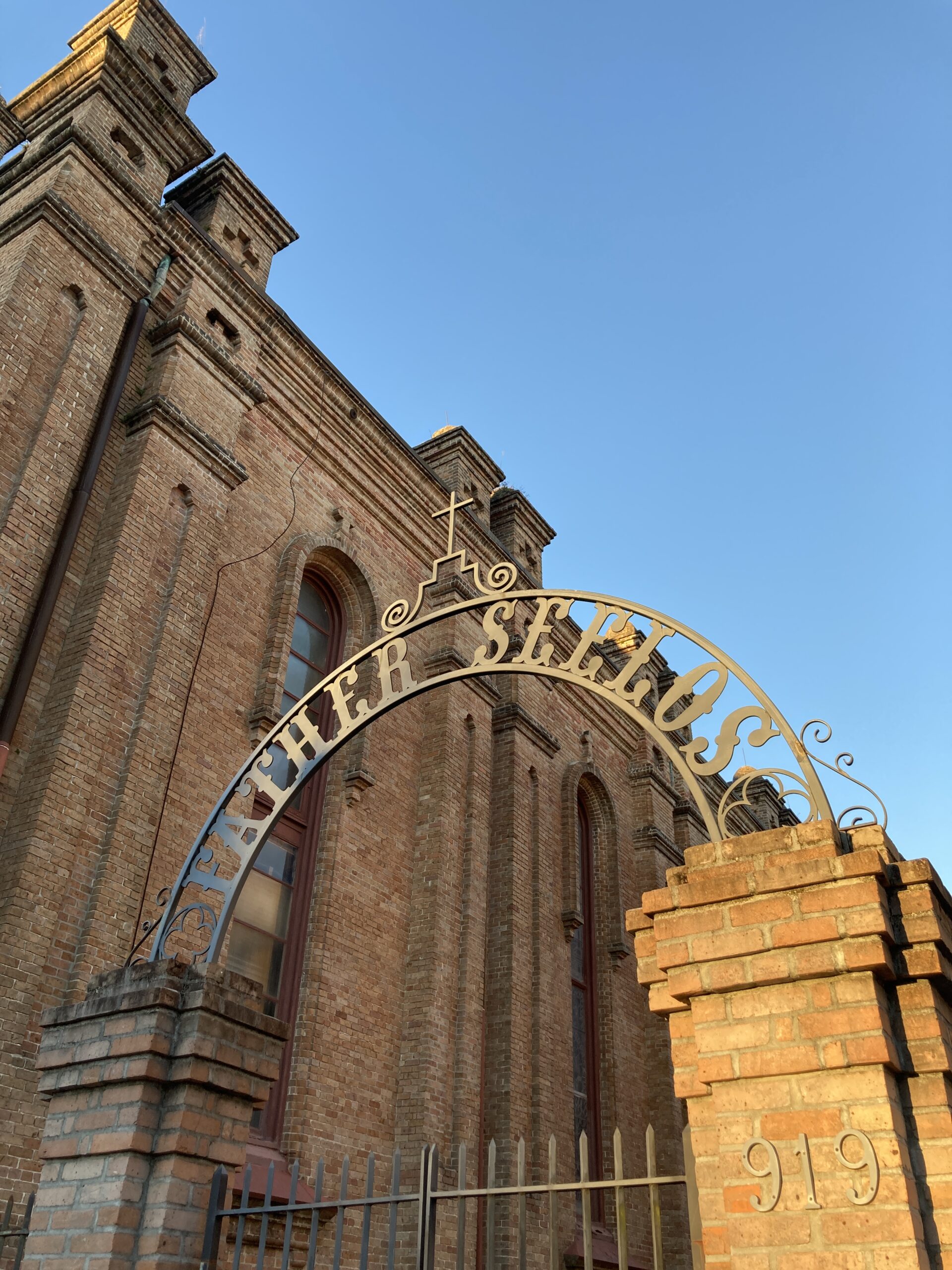 “The American is always in a hurry.” Alexis De Tocqueville, a noted political scientist of the 19th century, made this observation a century and a half ago and one might wonder what he would say if he visited America today. Perhaps a more prescient writer could have said “The American is busy” leaving room for the supplementations of words like “always”, “very”, “extremely”, and “absurdly” in subsequent years as our lives are consumed more and more by “busyness culture” than the Americans of De Tocqueville’s day.

The busyness of the American mind has projected itself into the spaces and environments around the nation, reinforcing the dominance of “busyness culture”, so much so that upon entering a space of reverence and silence like St. Mary’s Assumption Church, it feels completely alien. What is different can be unsettling, but also enriching to the mind and soul. That said, the key to truly appreciating a strange and new space is to find a guide to unlock an appreciation for that space, which is the approach this article will take, following an expert on Catholic Spirituality, a mindfulness coach, and a neuroscientist as they make sense of St. Mary’s Assumption Church.

In this endeavor to “Ban the Boredom” and find fulfilling, refreshing locations to enjoy in the city of New Orleans, St. Mary’s Assumption will provide an alternative line of thinking: that it would be better to “Embrace the Boredom” or rather to embrace that which capitalist society espouses as boring, namely, a fulfilling interior life. Clinical social worker Christopher Mulligan laments that in a networked life, the notion of “self” has diminished to microscopic levels as we are constantly connected to others, eliminating the virtue of self-reflection and mindfulness. St. Mary’s Assumption church, through its design, layout, and atmosphere encourages a reclamation of these lost practices that have been branded as boring in the culture of busyness.

In stepping off of St. Andrew’s Street, or better yet, through the church’s adjacent garden, one is embraced by a reverent, silent atmosphere bounded by enormous, polished wooden doors that provide a bulwark against the obligations and stresses of the outside world. Culturally, Americans are encouraged to be constantly stimulated and constantly busy. Closely linked with a culturally-imposed regime of constant busyness is constant consumption, a practice that is clearly self-serving for the capitalist forces that espouse the virtue of busyness ((it’s no coincidence that busyness and business appear nearly identical etymologically). All of these cultural and capitalist forces break like waves on the exterior doors of St. Mary’s Assumption. This effect is intentional.

St. Pope John Paul II, in an address in Latvia notes that “the Church has always distanced itself from capitalistic ideology, holding it responsible for grave social injustices”, which has informed the development of the environment in churches like St. Mary’s Assumption that feels isolated from those worldly pressures. Neuroscientists would agree that protection from market forces has a fundamental impact on the mind, as frequent persistent advertising affects the amygdala or “emotional part of the brain” by releasing chemicals like dopamine that can obscure the recognition of natural emotions. Upon entering a church like St. Mary’s, intentionally designed as a haven from harmful market forces, the brain is already passively healing and relaxing.

Seated in the burnished wood pews, the brain passively heals as light filters in through stained glass scenes on the chapel walls. The light comes cascading off of golden chandeliers to illuminate the faces of multitudes of saints. Lingering in the air might be the sweet notes of incense from a recently celebrated mass. If passive brain healing is your jam, this just might be heaven. But for most people, the overwhelming sense at this moment, after taking in the sights and smells of the church, would be boredom, maybe even extreme boredom. But this is a natural response, or rather natural for the modern American. Mindfulness experts agree that in moments such as these, Americans have been programmed to crave diversion and excitement and even further, to expect it. The goal of businesses and mass culture today is a complete eradication of inward consciousness and redirection of that consciousness to the external environment. 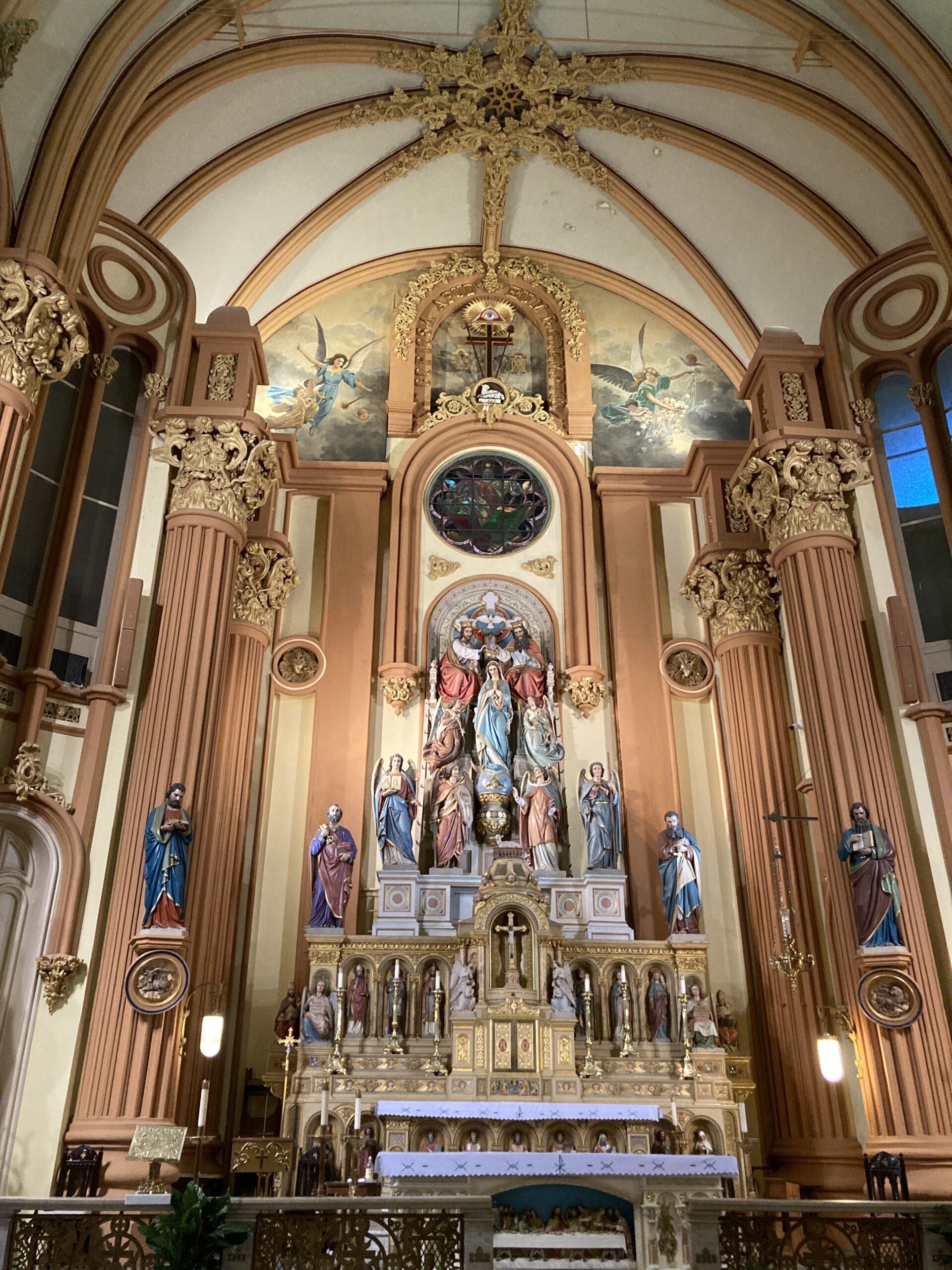 Contrary to this goal, the external environment of St. Mary’s Assumption redirects the consciousness towards the interior of a person. The intricately-carved pink columns rise up to support an immense, vaulted ceiling, covered in religious iconography. That ceiling stretches down to a yawning, expansive nave at the front of the church, showcasing a beautiful crucifix surrounded by the mourning statues of saints. Every aspect of this architecture was designed to turn one’s mind inwards and embrace “boredom” by focusing on the endlessly interesting subject of the self. The verticality of the Catholic church directs the mind of the occupant to heaven, an aim that in turn directs the consciousness to the self as one considers their own inner communion with God, which mirrors, however imperfectly, communion with God in heaven.

A mindfulness coach contemplating the intricate carvings on the vaulted roof would agree that the architecture of St. Mary’s directs the mind to contemplation. The twin principles of “scale” i.e. the size and verticality of the building, as well as “mysteriousness” (religious iconography in the nave) in architecture combine to induce mental states that help people realize their “real selves”.

This notion is borne out in scientific circles as well. Research indicates that certain spaces act as a “spiritual magnifying glass”, intensifying feelings of peace, stillness, and tranquility that can lead to the reflection that is lacking in our culture of busyness. In addition, research into biogeometry, or the impact of geometry on the brain, has shown that certain architectural styles (based around particular shapes and materials) that are utilized in sacred spaces (as opposed to commercial or residential spaces) have positive effects on particular brain waves as measured by an EEG test. These positive effects include stress reduction, creativity, focus, relaxation, and comfort.

Another prominent feature, outside of its architectural details, is its abundance of silence. Silence as an entity has an enormous presence if one allows themself to simply notice it, be engulfed by it, and feel dwarfed by it.

The ideology of busyness, or what Cardinal Robert Sarah terms the “Dictatorship of Noise” has systematically obliterated silent spaces, even the rapidly dwindling “naturally quiet” places in the wild. This is for good reason, at least on the part of the ideology of busyness and those it serves. Cardinal Sarah notes the profound impact that silence can have on the soul and its introspection. Clinical psychiatrists also espouse the benefits of “intermittent silence” or brief periods of silence and stillness that help to manage negative emotions and communicate more effectively once the silent period is over. Neuroscientists agree that silence has beneficial effects for the human mind, with one researcher showing that only two hours of silence prompts cell development in the hippocampus, the part of the brain associated with memory.

Silence, like the architectural elements and lack of commercial entertainment options, would be considered “boring” by popular media and big business, but by embracing this boredom, one can begin to reclaim a genuinely rewarding interior life and experience a number of spiritual, psychological, and neurological benefits. Many modern people have not heard their own thoughts clearly in a long time and live in a haze of busyness and tension, but this status quo need not remain unchallenged. Alternative spaces like St. Mary’s Assumption provide options to challenge the “culture of busyness” and counteract its harmful effects.