Editor’s Note: May we Mayke a suggestion? No, our suggestion is not that we stop using cringeworthy puns, but it is to think ahead! We know what’s coming: the summer. The time when the air is heavy, the tourists have abandoned ship, and us locals are left to enjoy our city, heat and all. That’s where we come in! All the month of May we are going to prepare you to “Ban the Boredom” by giving you the best places, the best restaurants, and the best event, but since we never do anything “normal” at ViaNolaVie, we are basing these suggestions around various psychological states! If you’re a total introvert, we’ve got a spot for you! If you have a disability, we’ve got the places that actually don’t discriminate and let you get down the way you want to get down. We’ve got something for everyone because New Orleans is the city for everyone! Up next, writer Madison White shows why you never actually have to be lonely in New Orleans because for $1.25 you can take a ride on a line made for conversation. 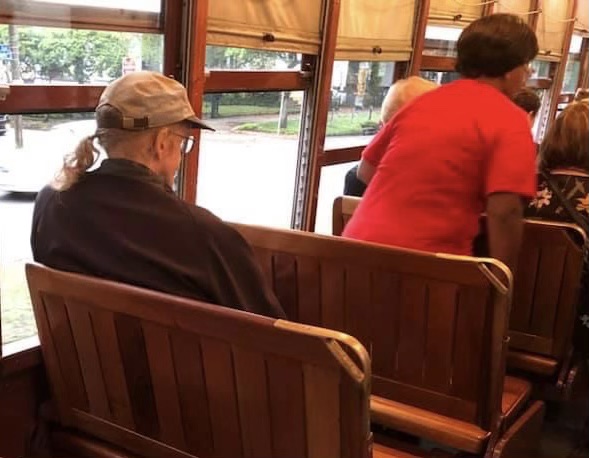 Inside of streetcar. (Photo by: Madison White)

Ever since the pandemic hit the United States in March of 2020, many things come to mind, but something that stands out is the concept of loneliness. According to Sweet’s piece on loneliness and the pandemic, loneliness has been rising even before the pandemic began (Sweet, 2021). Modern-day advances have made it easier for humans to connect through technology, but it has also created challenges of hiding behind a screen, which can make us feel more alone and disconnected.

Loneliness can be hard to identify because it looks different for everyone, whether it be being physically alone or mentally alone surrounded by people. Even the people who seem to be surrounded by many can feel alone or like no one truly knows them. The words “lonely” and “loneliness” rarely appeared in writing even well into the 17th century and when they were used they were to describe being physically removed from others. While the feeling of loneliness may never be solved, it can be alleviated. Here’s where the streetcar comes into play.

The hardwood benches on the streetcar are fashioned in rows directly next to open windows where riders can take in the sights and breeze. At any moment someone can plop down next to you, creating very close proximity. The benches are reversible, allowing one to face others on your trip. It is unclear whether or not that feature was created so that when the car reached the end of the line, the seats were reversed to be facing the right direction or for more social interaction. The open concept creates transportation means that are not confining, which is vital considering how packed the streetcar can get. Once all the seating is taken, people begin to stand all around, the sudden stops urging them to hold on for dear life. Being surrounded by all those people, even strangers can be the cure for loneliness.

According to an article on loneliness as an epidemic in modern society, there are not many attempts to define it in literature (Killeen, 2002). The feeling of loneliness is highly subjective, which can make it harder to get to the root. With the rise of the digital age, where 4.95 people around the world used the internet in just January 2022, social interactions in person can help curb the feeling of loneliness. Social loneliness refers to a lack of a social network but also the sense of not feeling like you are part of a community (Yanguas et. al, 2018). The streetcar gives an opportunity to be a part of the New Orleans community, especially with the rich history the physical streetcar actually holds. On my own ride, I looked around and noticed not a single person was sitting on their phone, but instead taking in the sights around them.

On the streetcar one can people watching whether it be observing passengers or the people walking along St. Charles. Everyone is in close proximity to one another surrounded by open windows that are key for absorbing everything around. Whether it be guessing these strangers’ life stories or daydreaming about life, the streetcar is the best spot. One will encounter a myriad of different people providing the best content, like the group of men on a bachelor’s trip or the woman who has ridden the streetcar every morning for the past 20 years to get to work. 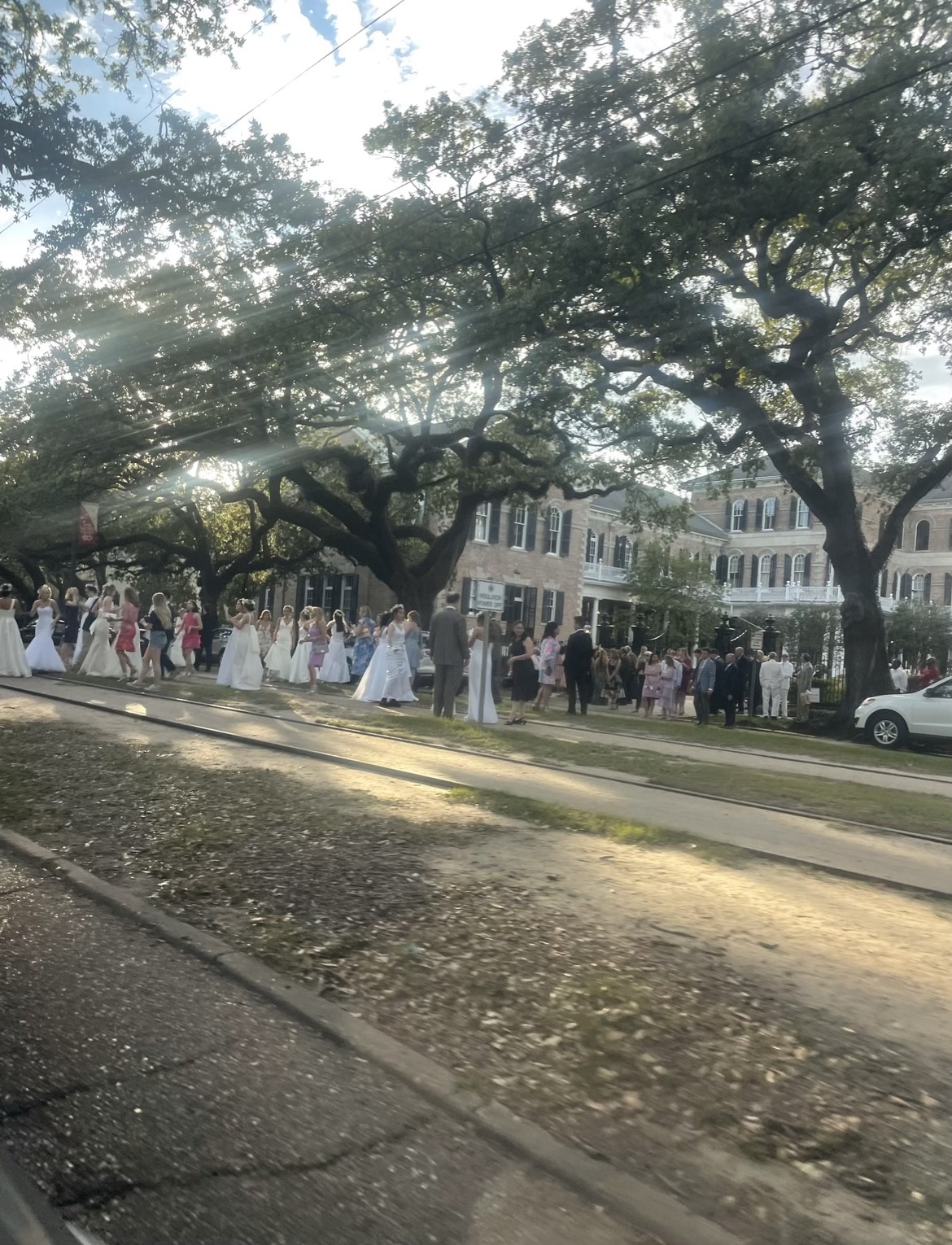 View from the streetcar. (Photo by: Madison White)

Why do we enjoy people watching? Research suggests that just by analyzing people’s appearances we can form impressions about strangers without having to get to know them (Quadflieg and Penton-Voak, 2017). Part of loneliness is the longing for connection with others in a world where most feel misunderstood. Even the simple act of watching other people’s behavior can make us feel closer to others, connected. As humans, feeling connected to others is essential to having a social network and we can use our bodies to communicate messages we want others to receive. The streetcar provides the ability to communicate with strangers without speaking. It satisfies the need for connection without putting the stress on it that regular social settings do. Sitting next to a stranger in the car and watching what they are doing, whether it be reading an article about what’s going on in the world or taking note of what song they are listening to through their headphones can create a sense of intimacy. People are most vulnerable when they are alone and we have more of an ability to gauge a better understanding of someone when they are alone or don’t know they are being watched. 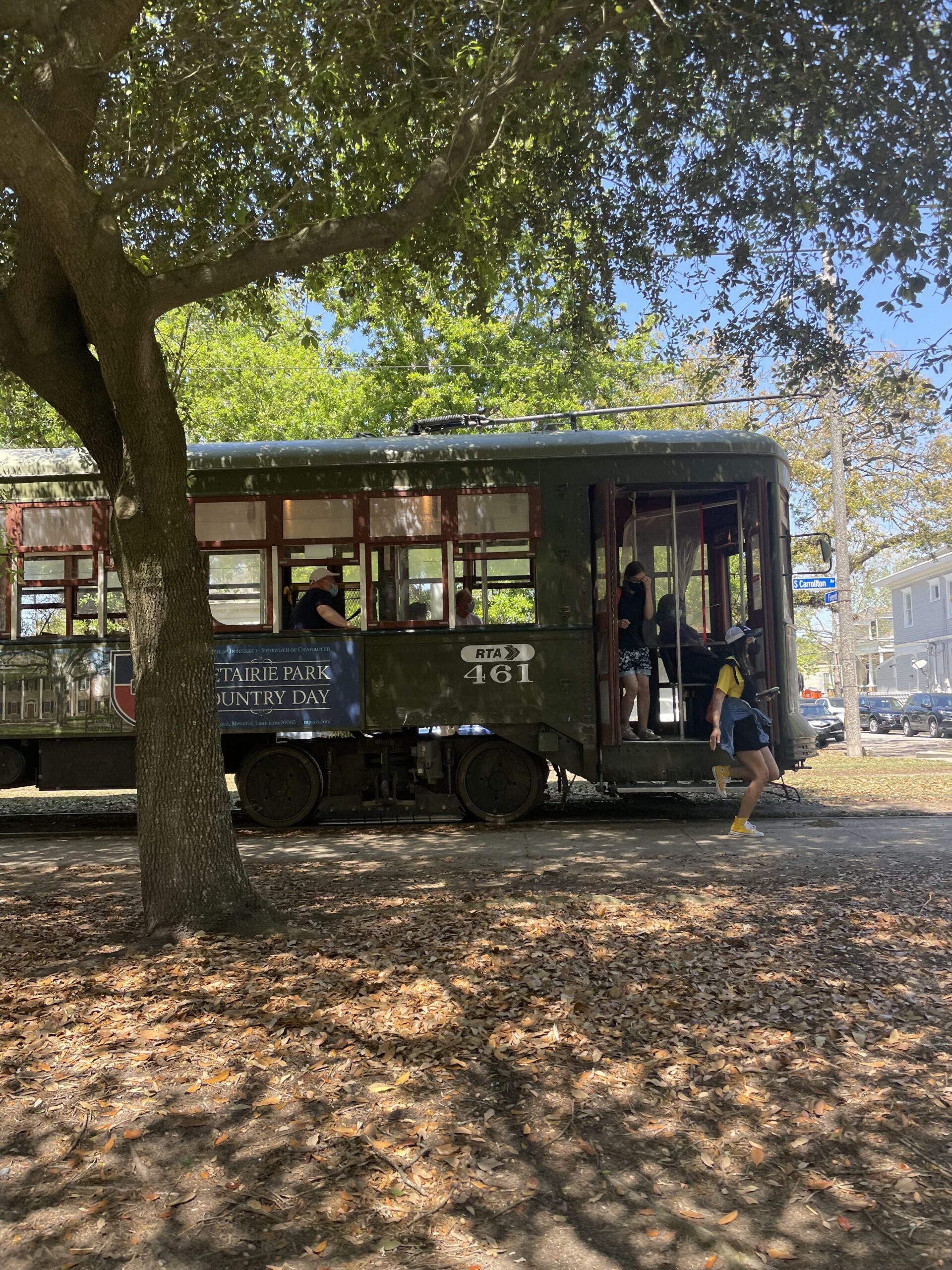 Passengers getting off the streetcar. (Photo by: Madison White)

The St. Charles streetcar runs from South Carrollton Avenue and South Claiborne Avenue to Canal Street and passes by many attractions such as Audubon Park with its grandiose oak trees and the historic Columns Hotel’s prominent columns. One can take in all the outdoor sights New Orleans has to offer on the way to a specific destination. Riders may pass a second line or hear the smooth sound of a band playing jazz music on the side of the road – the opportunities are truly limitless. Anyone who’s ever seen a streetcar pass by has surely taken in the curious heads that pop out the open windows taking in all New Orleans has to offer. The sounds of birds chirping and trees bustling in the wind only add to the nature-like experience of the streetcar.

The outdoor concept of the streetcar is one of its biggest draws. Recent findings suggest that nature contact can drive psychological well-being and in turn help with loneliness (Leavell et. al, 2019). Nature has many stress-reducing qualities that can help take the edge off of social situations. Research also found that nature can help break down barriers socially between community members (Leavell et. al, 2019). The streetcar can act as a mental timeout and a place to unwind socially while still feeling like a part of the community. It can help create the feeling like one belongs because every person on the streetcar has a reason for choosing that as their mode of transportation as opposed to the many other options there are. Everyone on the streetcar has something in common which bonds them together. 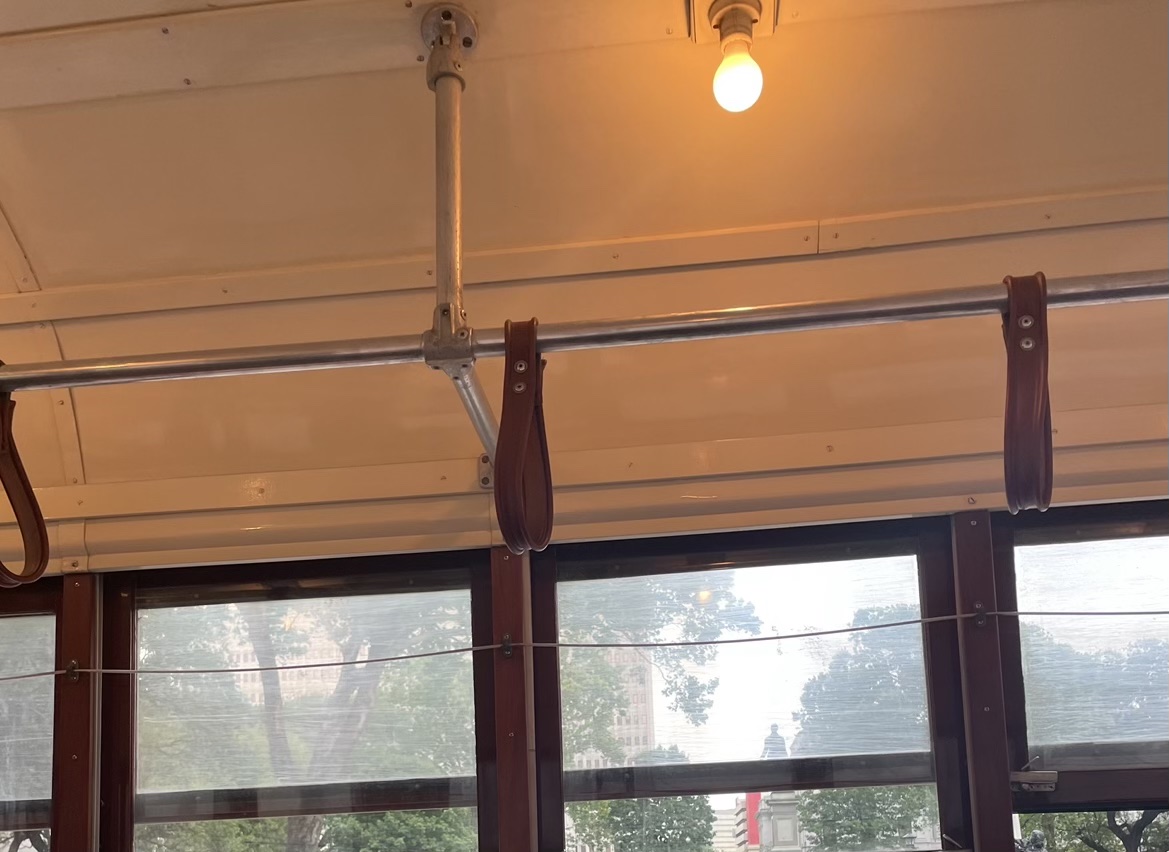 Handle on the streetcar. (Photo by: Madison White)

The history of the St. Charles Streetcar dates all the way back to 1835 as the first line and one of the oldest operating street railways in the world. It was first invented as a passenger railway between New Orleans and a distant suburb, Carrollton before it was a part of the city. When Congress passed a “Civil Rights” bill in 1866, African Americans in New Orleans dealt with streetcar segregation that led to The New Orleans Streetcar Protests of 1867. African Americans were only allowed to board certain streetcars that had large black stars. White gangs filled the black stared streetcars just so African Americans didn’t have space to ride. Activists and African Americans began to resist and argue that streetcar segregation violated the Civil Rights Bill (Bardes, 2018). They helped equal access to public services become a basic civil right. The history of the New Orleans streetcars is one that is submerged in exclusiveness but has become a public service accessed and enjoyed by all regardless of the color of their skin because of the activists in 1867. Now, instead of causing isolation and loneliness, it curbs it with its rich history and access to all.

Davis Abdallah, Amy F. Alone and Lonely: Can the Two Be Separated? https://www.jstor.org/stable/j.ctv1131g6h.15.