Jamila’s Cafe and the family you’re not related to

Editor’s Note: May we Mayke a suggestion? No, our suggestion is not that we stop using cringeworthy puns, but it is to think ahead! We know what’s coming: the summer. The time when the air is heavy, the tourists have abandoned ship, and us locals are left to enjoy our city, heat and all. That’s where we come in! All the month of May we are going to prepare you to “Ban the Boredom” by giving you the best places, the best restaurants, and the best events, but since we never do anything “normal” at ViaNolaVie, we are basing these suggestions around various psychological states! If you’re a total introvert, we’ve got a spot for you! If you have a disability, we’ve got the places that actually don’t discriminate and let you get down the way you want to get down. We’ve got something for everyone because New Orleans is the city for everyone! Up next, Jamila’s Cafe and why it’s the spot for people in search of home and comfort.

Resting quietly under the oak trees on the corner of Maple street sits an oasis amidst the hustle and bustle of New Orleans- a restaurant called Jamila’s Cafe. Moncef Sbaa has been running this restaurant with his wife, Jamila, the head chef and face of the restaurant, since 1994. The couple has charmed the Garden District with their Tunesian inspired blend of mediterranean-creole food, as well as their love story. A piece that features Jamila’s on nola.com reveals a conversation between Jamila and Moncef before the restaurant opened in the mid-90s. Moncef recalls that “Jamila said, ‘this is your dream Moncef. Put your name on it. I said, ‘No’. I Put Jamila’s”. From the atmosphere of the restaurant that removes us from the harsh realities of the world, to the imperfections and subtle flaws that come out once you dig a little deeper, to the comfort food that turns customers into regulars, Jamila’s Cafe is a representation of home in more ways than one.

Walking into the interior of Jamila’s feels like walking into your own home, or at least what your own home is supposed to be. The smell of harissa, cayenne, and cumin feels like a hug to your nostrils and soft candlelight fills the room with a warm glow. These things that define home for humans- the smell of good food, the love of family surrounding us, this sense of uninterrupted comfort- are only associated with such positivity because the idealistic view of home is a positive place. Gabrielle Calderon of The Strand discusses how “a home is not just a place where we structure our daily and physical lives- it’s also where we structure our emotional and psychological lives. It’s where we feel the most comfortable and relaxed” (Calderon). This idyllic view of home has been pushed onto humans for centuries. Take the “American Dream” for example. The American dream is “the belief that anyone, regardless of where they were born and what class they were born into, can attain their own version of success in a society in which upward mobility is possible for everyone. The American dream is believed to be achieved through sacrifice, risk-taking, and hard work rather than by chance” (Barone).  The American dream is often associated with the family because “marriage- because it brings two adults together, because it  engenders a sense of stability- tends to lift the economic fortunes in young adults” (Wilcox). 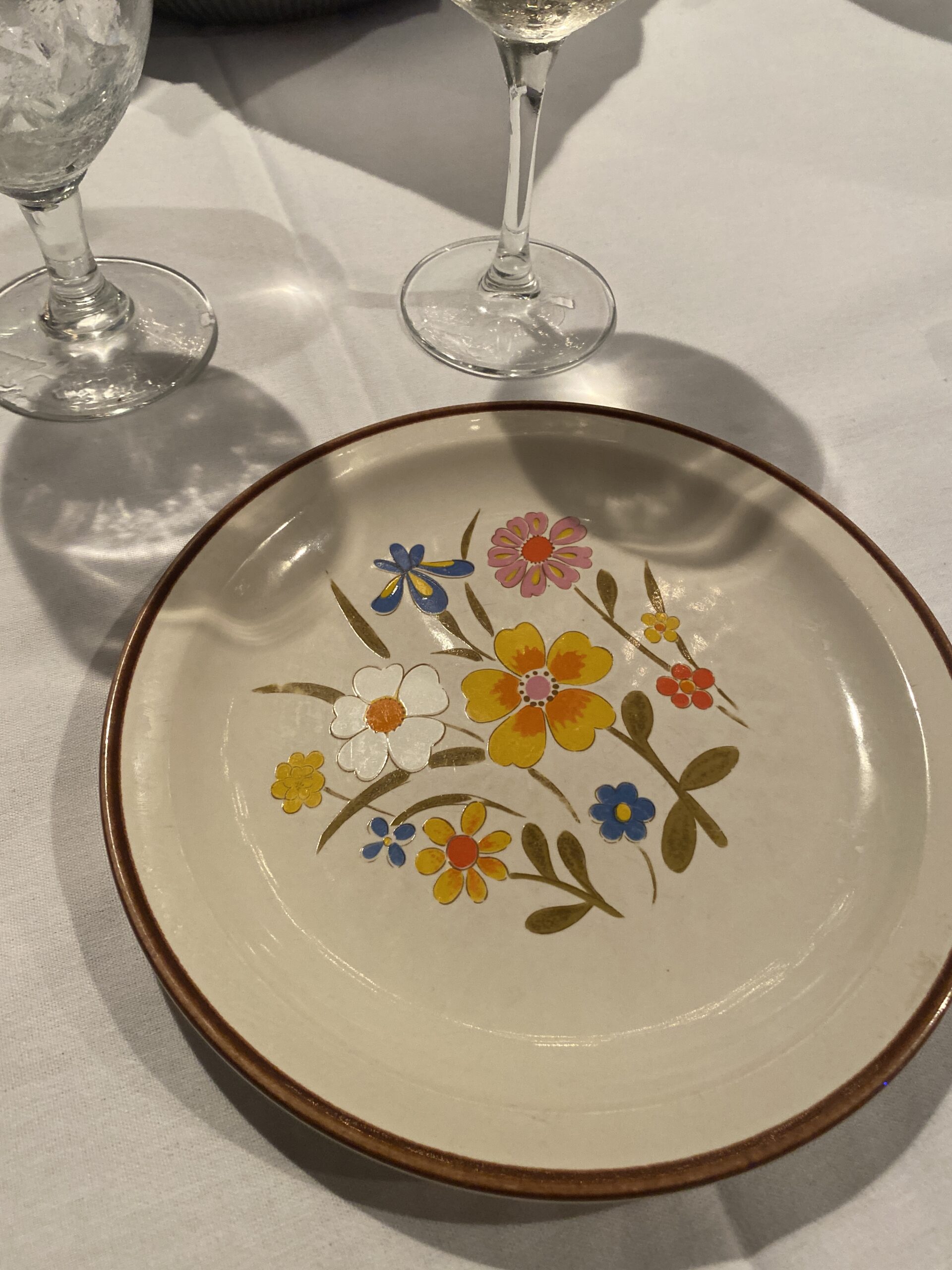 A delicate, decorative plate with glassware at Jamila’s Cafe (By: Olivia Barnes)

This initial impression of Jamila’s, however, isn’t a representation of home, but rather a representation of the “pretty” parts of home and family life that we tend to emphasize as a society and culture. On the ceiling of Jamila’s is painted a bright blue sky, with soft white clouds intermittently scattered throughout, as if every day inside Jamila’s is a perfect, sunny day. Similarly, this idea of the “nuclear family” and the “American dream”, tends to paint a sunny day on all the hardships that families must endure, all the terrible, awful, unjust reasons why this idyllic family is not possible for everyone. In a way, the idea of the idyllic family removes us from reality; we get caught up in the notion that family alone will bring us success, comfort, fulfillment. But at any moment the dream can kick us out, the doors can close behind us, and the merciless nature of reality can throw us back onto Maple Street under the shade of the oak trees.

When the idealized version of family life is presented to people, it’s easy to see why so many buy into it. As humans, we naturally want success, freedom, happiness, and fulfillment, and starting a family seems like a one way street to a life that encompasses these values. However, painting a blue sky on the ceiling won’t fix the cracks on the floor.

There’s sort of an imperfect charm when you walk into Jamila’s. The tables sitting outside of the restaurant are covered in a crisp white table cloth- hiding the fact that underneath is an old rickety table made of rusting steel. When you go to sit down at the table, though, it’s easy to forget that what’s beneath the clean white sheets is a fixture that may collapse at any moment. The fact of the matter is that “nearly half of the children born to married parents in [America] will go through a divorce before they are eighteen” (Clarke-Stewart, Brentano). Although there are some marriages that are happy, fruitful, and long-lasting, it’s like flipping a coin; tales and you get the other side of marriage: divorce. Not only does divorce devastate the idyllic representation of family that the couple once strived to achieve, but its effects linger far beyond the couple themselves. For instance, “children from divorced families are more likely to have conduct problems and show signs of psychological maladjustment; they have lower academic achievement, more social difficulties, and lower self esteem.” (Clarke-Stewart, Brentano). If a couple is hoping to save their relationship by having children, by throwing a white tablecloth over the issues they already have, it’s important to note that “marital satisfaction may well drop as much as 50-90% after having kids” (Malkin), therefore making it extremely unlikely that the child will, in fact, save their marriage. Children of a married couple who are already unhappy in their relationship are at an even higher risk of becoming the children of divorced parents and suffering the consequences. These “imperfect charms”, then, may represent a crack in the system, a taste of reality in a space where fantasy and idealism thrive. Ignoring the old, rusted, rickety table is extremely easy to do when there’s a white table cloth that can be pulled out at any second to cover the mess. However, if the foundation of the table isn’t strong, no amount of white tablecloths can keep it from caving in at any moment. 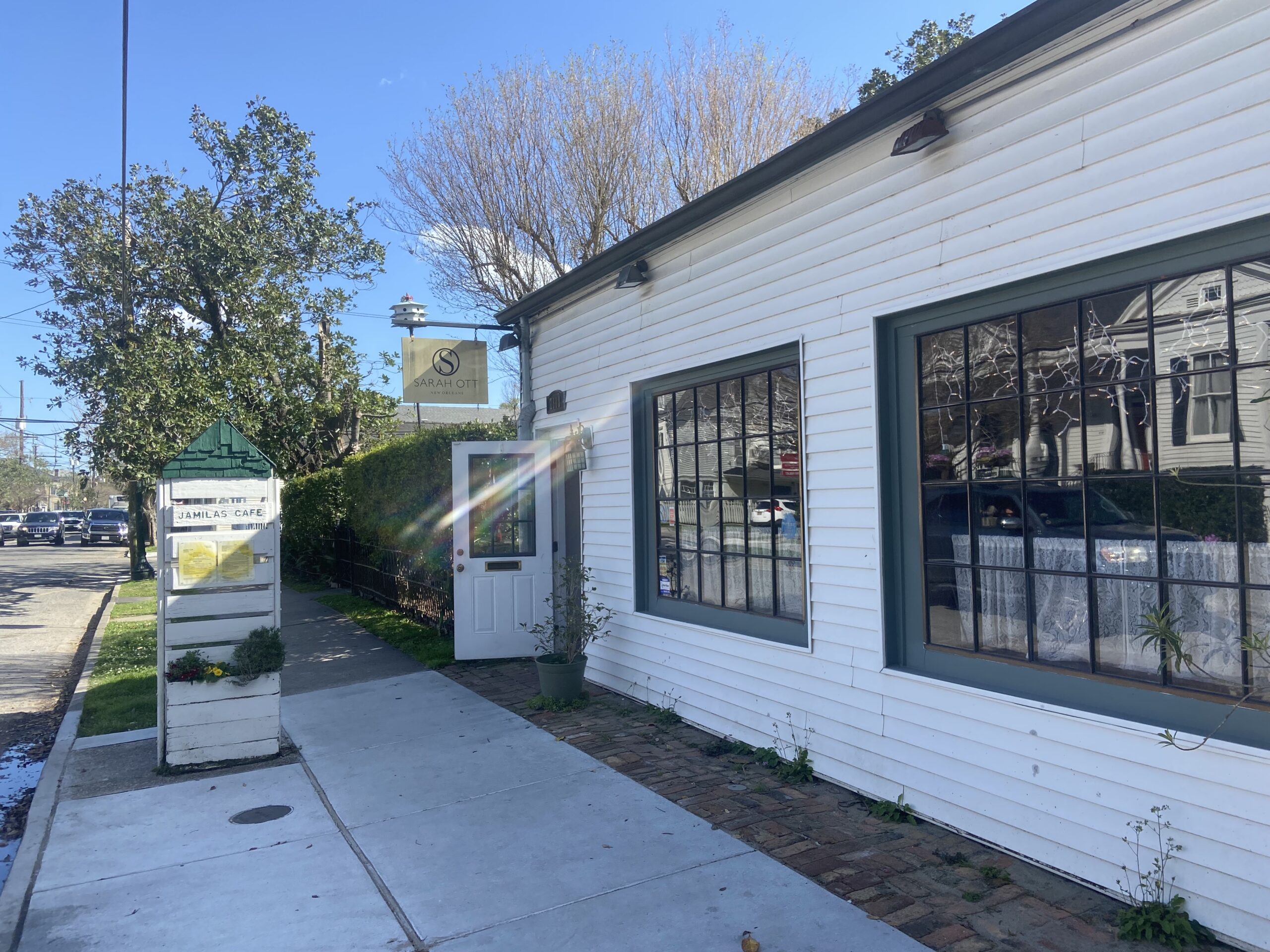 Once Moncef seats you at the rickety, white-clothed table, the promise of food outweighs any prior concerns of foundational imperfections that may have crossed your mind upon entering Jamila’s. The food at Jamila’s Cafe is an added bonus for those that feel welcomed and at home in the restaurant. The Tunisian inspired mediterranean-creole food is rich with the flavors of parsley, local fish, garlic, sun-dried tomatoes, and lamb that can be cut with a butter knife. The dining room smells of saffron and browned butter. Most customers come back to this space because of its positive aspects- the food, the friendly owners, the ideal location- while paying no mind to the subtle flaws of the restaurant. In other words, the good outweighs the bad. When we enter relationships after seeing the idyllic representation of what we want our future to be, what we want our family to look like, it’s easy to excuse the bad  parts with the good parts. In abusive relationships, for instance, things like physical care from a partner who provides disability support, the responsibility of having children, or the feelings of love that one may still feel towards an abusive partner can keep them coming back to their abuser over and over again. Over time, the little subtle flaws- the rickety table, the crack in the floor, the slow service- doesn’t seem so small. These little things that we chose to ignore eventually caused the whole building to collapse.

Jamila’s is like a dream- a dream of comfort, a dream of belonging, a dream that is centered around the idealistic view of familial bliss that has been pushed on members of American society for as long as we can remember. But although Jamila’s is somewhat of an oasis- just like this dream that we place on a pedestal of the perfect life, the perfect family, the perfect home- there are bound to be faults in the system that reveal the harsh realities of family life for so many people. Customers, however, continue to come back to this space because of the comfortability it provides. When the good outweighs the bad, when we feel as though flaws and imperfections are to be overlooked in favor of the positive aspects that we hold onto so dearly, it’s only a matter of time before the faultline turns into an earthquake.

Storyville and The Vintage
Restaurants