What is the toxic truth behind Mardi Gras beads?

In 2020 (and 2021…and 2022…you get the point), there have been a lot of unanswered questions about life and living, so in our partnership with the Chemical Engineering Service Learning Class at Tulane University, taught by Dr. Julie Albert, we made it our aim to find questions we could answer. The series is called “Dear Big Chem-EZ” (think “Dear Abbey” but with less about “Why does my partner ignore me?” and more about “Can I actually drink my tap water?” and “What’s that smell outside my house?”).

With this being Mardi Gras month, we’re focusing on the iconic beads and what their toxic truth is.  If you have questions you’d like answered, send them to thebigchemez@gmail.com.

Dear Big Chem-EZ, I’ve heard about the potential hazards around the plastic Mardi Gras beads, but I don’t exactly know what makes them hazardous to our health. Do Mardi Gras beads contain toxic materials?

Each year 25 million pounds of plastic beads are manufactured for use during Mardi Gras. Besides wearing the beads or taking them to bead recycling centers (hopefully), millions of pounds of beads end up on trees, in the streets drains, or in landfills. I’m here to shed some light on the chemicals commonly found in these highly sought-after plastic beads and the hazards associated with those chemicals. 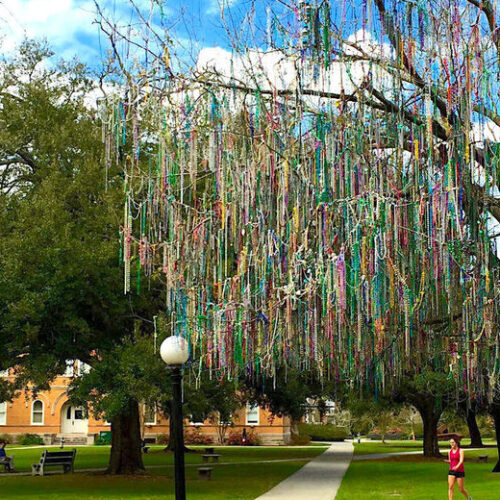 So now let us talk about the chemical composition of Mardi Gras beads. The plastic on the beads contain hazardous metals such as lead, as well as bromine and chlorine-based flame retardants. Many of the plastic beads we see today are made of recycled electronic waste. The hazardous metals and flame retardants are induced to the bead’s compositions because of the use of electronic waste in their production [1].  Researchers at the Ecology Center expect there to be about 900,000 pounds of hazardous flame retardant and 10,000 pounds of lead in each year’s total plastic bead manufacture [1]. 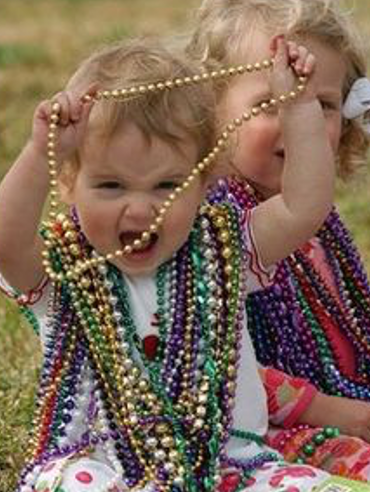 While lead exposure is dangerous to everyone’s health, it is particularly dangerous for young children. Lead is a heavy metal that is commonly used in many consumer products although scientists have determined that there is no safe level of lead for children, with the smallest amounts of lead being able to cause impairment to the development of the brain, muscle weakness, and kidney damage. To put this in perspective, the United States Consumer Product Safety Commission (CPSC) limits lead in products to 100 parts per million (ppm). However, over 60% of the Mardi Gras beads thrown are expected to have lead levels well above 100 ppm [1].

As you can see there are many hazardous chemicals used in the production of the plastic beads thrown during Mardi Gras. Even though beads bring the city so much joy during the carnival season, we need to be aware of what is in our beads and what we do with them after Mardi Gras. To conclude with some final advice, do you need to worry about these chemicals being absorbed through your skin in the short periods of time you have them around your neck, no. However, you do need to avoid ingestion of these chemicals, especially with children, so try to keep beads out of children’s mouths and wash their hands well after they are playing with the beads.