Only Nola: The drive-thru daiquiri

Picture this. It’s another scorching Tuesday evening (lets say 98° with 85% humidity) in New Orleans, the sun is setting in vivid pinks and purples as you drive home after a LONG day of work, and you pull up to the drive-thru window at 981 Jefferson Hwy. You tap your fingers on the steering wheel to the beat of TLC’s “Waterfalls”, impatiently awaiting your order and the $2 change the attendant owes you from the crisp $10 bill you gave him, and finally… it gets passed through the window: an ice cold 44 oz Mega 190 Octane Daiquiri —an exclusive $8 Tuesday special— from one of the many New Orleans Original Daiquiris drive-thru locations. 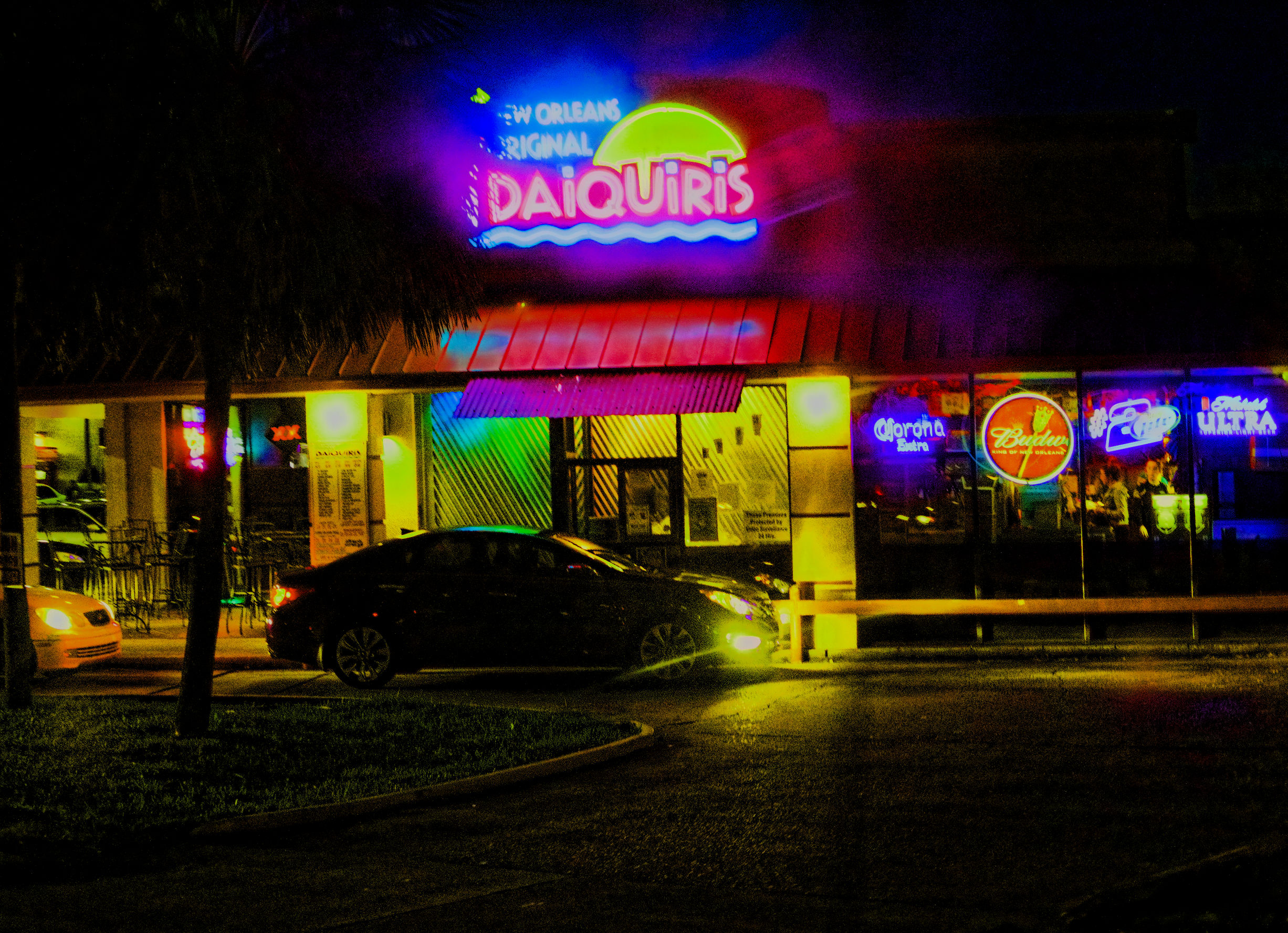 Ahhh the drive-thru daiquiri; capturing the hearts and tastebuds of New Orleans locals and tourists alike since September of 1982 when Glynn Weber’s Glynn’s Daiquiri Place opened in the parking lot of the Plaza LaPlace shopping center. The concept of the drive-thru daiquiri however arguably started the year before in Lafayette, Louisiana, with David Ervin’s overnight success of The Daiquiri Factory. Less of a “factory” and more of a quaint stand on Johnson Street, cars could drive up and choose from a variety of 15 flavors of frozen drinks constantly churning from the drive-thru’s machines. While currently one of the most popular places in the city to pick up a daiquiri from the comfort of your own car is (drive-thru locations) of New Orleans Original Daiquiris —which has over 26 sites across the state and counting,— it would be a utter daiquiri disservice to not mention other less chain-like drive-thru spots like Daiquiris & Cream on Lake Ave, Daiquiri Stop on Hickory Ave, and Daiquiris & Company on Elysian Fields Ave. In the most literal sense, the drive-thru daiquiri can be broken down into its two parts: it is a daiquiri (a frozen alcoholic beverage) that is obtained specifically from a drive-thru service.

Addressing the elephant in the room: yes, the drive-thru daiquiri is 100% legal in New Orleans, despite the paradox of combining drive-thru + daiquiri. Very simply, driving a car, a customer pulls up to a window, remains in said car whilst the employee inspects their ID and takes their drink order, hands the customer their drink through the window, and the customer drives away in their car. Don’t worry, under Louisiana law it is still very much illegal to drive while intoxicated (DWI), meaning a blood alcohol concentration of .08% or higher. Yet, the state of Louisiana has an open container law; in New Orleans possession of an open container of alcohol is illegal in vehicles for both the driver and passenger.  La. R.S. 32:300(B)(3)(a) defines an “open alcoholic beverage container” as any bottle, can, or other receptacle that contains any amount of alcoholic beverage that is open or has a broken seal, or whose contents have been partially removed. Drive-thru daiquiris are served in plastic or styrofoam “go-cups”  sealed with a lid. In other words, possessing a daiquiri in a vehicle in New Orleans is permitted so long as the cup has a lid, has no straw protruding the top, and has not had any contents removed. What is stoping someone from keeping another wrapped straw or lid in their glove compartment (so that they can  start drinking the daiquiri while they drive before it melts) to show an officer if they get pulled over? Not very much. 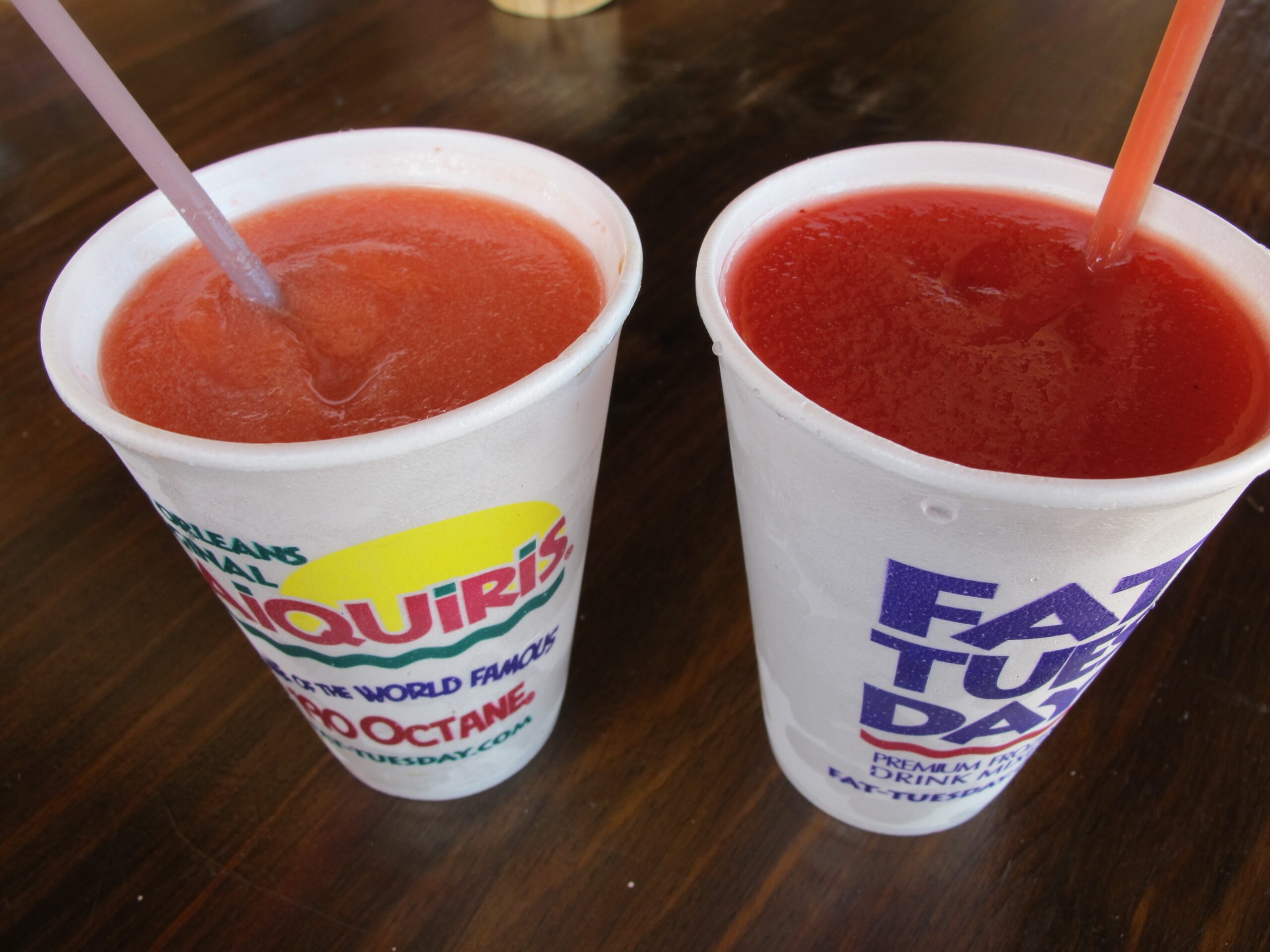 On the theme of “legality”, there is another elephant (but lets call it a baby elephant for the PUN of it) to address in the room: It is illegal for anyone under the age of 21 to buy alcohol in New Orleans. Well… if you are 18, public possession or drinking alcohol IS legal with a guardian who is 21 or older, for religious purposes, or in any private residence. Many bars in the city allow for 18 year olds to enter, but do not allow them to purchase alcohol in the facility (as it would be illegal). However, as someone who moved from California to New Orleans 3 years ago, there is something a little more “relaxed” in general about underaged drinking in the city. Listen, I’m not saying its would be easy for a minor to get alcohol in New Orleans, but rather it’s “less hard” than other cities and states.

When all of these factors add up (the drink, the drive-thru, the laws, the loopholes) together they are more of sticky situation than a spilled daiquiri on leather car seats.The 2019 CDC Youth Risk Behavior Survey found that among high school students, during the past 30 days, 5% of drivers drove after drinking alcohol and 17% rode with a driver who had been drinking alcohol. In New Orleans, anyone over the age of 15 can apply for a drivers learning permit. Therefore in theory, a 15 year old could pull up to a drive-thru daiquiri spot (with the adult they are practicing driving with), so long as they (or the adult) don’t purchase anything. But lets say someone underaged has a fake ID (WHAT! HOW UNCOMMON! NEVER!); fun names and lively flavors of drive-thru daiquiris market to both the kid at heart… and the kid. Take the Chocolate Bar Daiquiri —branded on Daiquiris & Company website as “dessert with a kick” for chocoholics— in which the Hershey’s syrup, milk, dark chocolate liqueur, and rum combine to mask the presence of any alcohol at all. Or even the Strawberry Daiquiri from New Orleans Original Daiquiris that is made with real strawberries and 151 rum, as the 151 refers to the proof level of being 75.5% alcohol per volume. Sounding familiar?

A similar phenomena of appealing to young kids in order to build habits for their futures comes into play with e-cigarette and various vaping devices. Most e-cig devices contain Nicotine —which in and of itself is an addictive substance— and about 69% of middle and high school students in 2014 were exposed to e-cig ads in stores, on the Internet, in magazines/newspapers, or on TV/movies. Like the drive-thru daiquiri, e-cig devices offer an abundance of fun flavors like Banana Split, Kool-Aid, Cotton Candy, and Gummy Bear, drawing in youth specifically.

With drive-thru daiquiri spots For those under 21, feeling sheltered and anonymous behind the protection of their car doors in the drive-thru (when combined with an alcoholic drink that tastes more like a Slurpee from 7/11 than a mix of 151 rum, 190 Everclear, and vodka) positions the drive-thru daiquiri as the adult candy store world that kids so badly want to enter.

*Traditionally, daiquiris were rum based frozen drinks, combining fresh fruit or fruit juice with sugar. Jennings Cox, the rumored inventor of the daiquiri — named after a Cuban beach of the same title near his mining station during the Spanish-American War— includes 6 lemons, 6 teaspoons of sugar, 6 cups of rum, 2 cups of mineral water, and handfuls of crushed ice in his original recipe. Some drive-thru daiquiri concoctions  —like the Crawgator Daiquiri (151 Rum, brandy, fruit juices, and tropical flavors) at New Orleans Original Daiquiris, the Bananasicle Daiquiri (rum, coconut, and banana) and the Liquid Marijuana Daiquiri (fruit juices, 190 Everclear, and Caribbean Spiced Rum) from Daiquiris & Company— include the original rum-based origins of the drink, while others —like New Orleans Original Daiquiri’s Hypnotic Chill Daiquiri (blue raspberry flavor, Diesel 190, brandy, and triple sec) and Mardi Gras Mash Daiquiri (bourbon, triple sec, and tropical fruit punch), and Daiquiris & Company’s Mighty 190 Daiquiri (190 Everclear, orange liqueur, and fruit juices)— seem to have everything but rum in them. Rum or no rum, pulling up to a drive-thru daiquiri spot offers more eye-spinning, brain-freezing, alcohol-loaded options then a kid walking into a candy store.

**Daiquiris (and daiquiri culture) are big business in New Orleans, with hundreds of shops and drive-thru’s building the multi-billion dollar a year empire . Despite the investment of commercial-grade daiquiri machines on average costing $3000 to $5000 a piece, selling a daiquiri at anywhere from $5 to $13 a drink, those machines get paid off pretty fast.  At a New Orleans Original Daiquiris drive-thru location, a 32 oz Large Daiquiri on Monday and Wednesdays is only $5.75, a 44 oz Mega Daiquiri is only $8.00 on Tuesdays, and on Sundays, 1 gallon of daiquiri is only $18.00 (instead of the typical $23.00)! Daily, a 12 oz is $4.50, and a 20 oz is $5.50.  Very bluntly put, drive-thru daiquiris can be a relatively inexpensive —in comparison to other single service drinks— alcoholic drink option in New Orleans. There is a benefit for both producer and consumer. 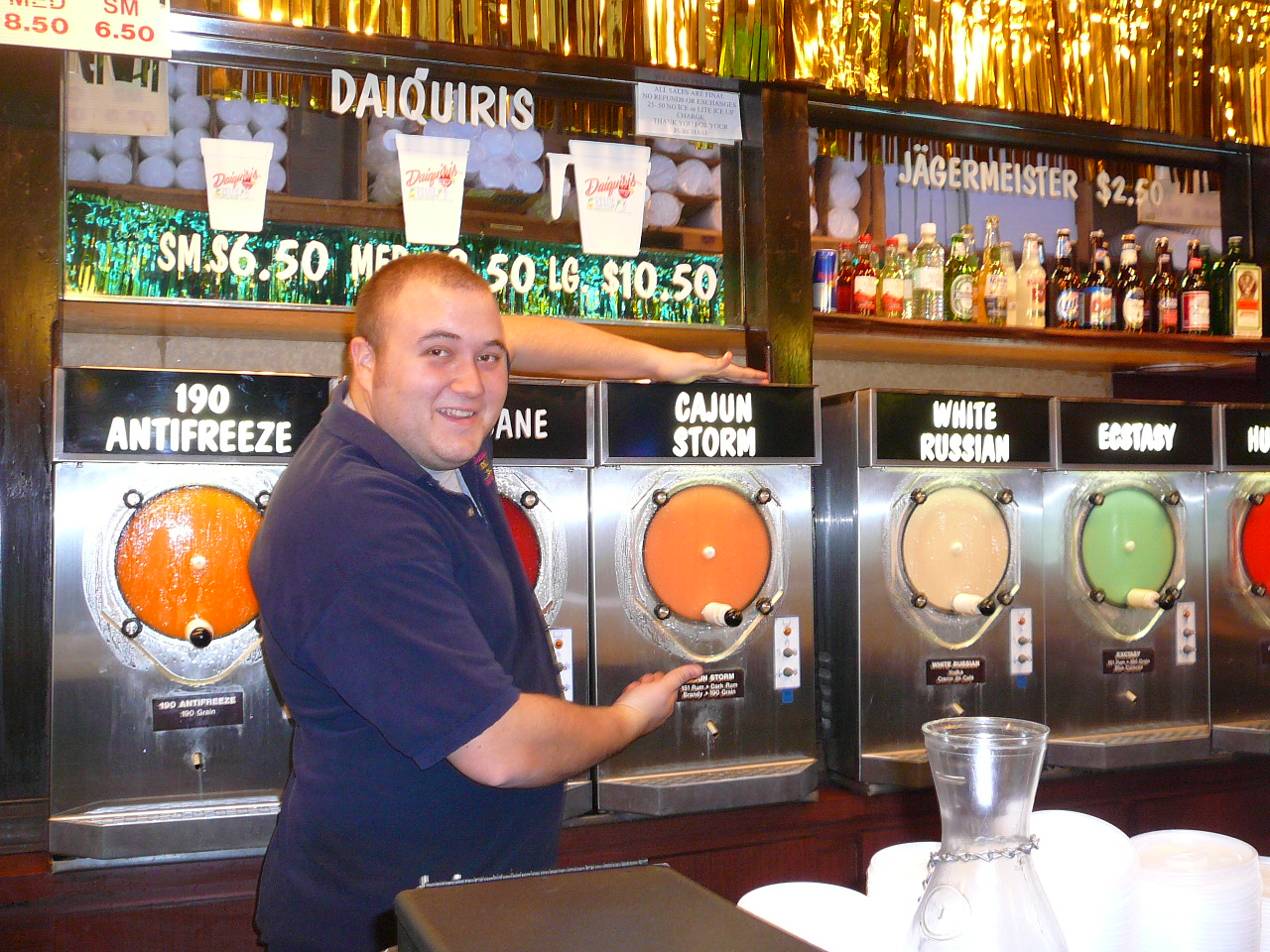 […] Where do you go for a daiquiri? From research by the late UNO history professor, Michael Mizell-Nelson, it seems clear that the first drive-through daiquiri store outside Ruston in 1979. Soon another drive-through poured in Lafayette in 1981. Like many Cajun food and drink trends, this one appealed to… everyone, of course, but New Orleans picked it up in a big way. […]

[…] Where do you go for a daiquiri? From research of the late UNO history professor, Michael Mizell-Nelson, it seems clear that the first drive-through daiquiri shop opened outside of Ruston in 1979. Soon, another drive-through was pouring in Lafayette in 1981. Like many Cajun food and drink trends, this one appealed to … everybody, of course, but New Orleans picked it up in a big way. […]

[…] Where do you go for a daiquiri? From research of the late UNO history professor, Michael Mizell-Nelson, it seems clear that the first drive-through daiquiri shop opened outside of Ruston in 1979. Soon, another drive-through was pouring in Lafayette in 1981. Like many Cajun food and drink trends, this one appealed to … everybody, of course, but New Orleans picked it up in a big way. […]

National Daiquiri Day is July 19. See recipes and backstory. | Where NOLA Eats – Tricks and Tips
Recent Posts on ViaNolaVie
Donate to ViaNolaVie!     GIVE BACK TO THE NEW ORLEANS PUBLICATION THAT’S ALWAYS GIVING!  ViaNolaVie,...