Punishment and redemption: Propaganda and the prison system

The famous linguist Noam Chomsky once said, “He who controls the media controls the minds of the Public,” a fact which is made abundantly clear when one looks at the media surrounding the prison system and incarcerated people. Regardless of what cable network you watch or magazine you read, almost every major news outlet in America seems to have one thing in common: the misrepresentation of the types of people behind bars, and the offenders of these crimes are often described as criminals who deserve to be locked in cages. Yet, when one looks at statistics, only 3.2% of convicted criminals are in jail for kidnapping, assault, or homicide, so why is it that these cases are the ones frequently described on the news? Especially when considering that almost half (46.2%) of prisoners in jail are in prison for drug offenses, of which are not typically violent?

When the Thirteenth Amendment was added to the constitution, it gave enslaved black people the freedom to live their lives without the shackles of slavery, with one simple caveat: if a black person were to commit a legal offense, they could be forced to work unpaid labor as punishment for their crimes. Because the south’s economy at the time relied so heavily on slave labor, black people were getting arrested at rapid rates for things as small as loitering or jaywalking, simply to exploit them for their labor. The Thirteenth Amendment was supposed to bring equality to America, but after the Civil War, black people were targeted by dangerous, twisted narratives. Black men were seen as uncivilized barbarians who were ready to attack white women at any chance and time by the press, regardless of the idea’s inaccuracies.

Because of this, racism became even more prominent in the already hate-filled nation, and it was very easy for some white people to simply ignore the plights and high incarceration rates of Black people because of their own inner prejudices and biases that were perpetuated by movies like DW Griffith’s Birth of a Nation, which inaccurately depicted the Ku Klux Klan as saviors for the white race and the Black community as criminals. By using propaganda to paint the Black population of America as ‘lesser than,’ it became very easy for people in power to unjustly arrest Black people for their labor, as in the public mind they were often already guilty of the crime, regardless of evidence.

While the system today is not as overtly racist as it once was in the 1800s, Black people are still arrested at higher rates than other ethnicities, and racism is still perpetuated in the media. For example, Black men make up less than a quarter of America’s population, yet they play 64% of movie and TV roles depicting violent gang members and criminals. Today, Black people are incarcerated at a higher rate than any other group in America. With the rise of social media and misinformation, racial stereotypes are gaining traction in ways never seen before.

Now you might be wondering why the government hasn’t stepped in to try and clear up the chronic misinformation, but in reality, the government itself benefits from these negative stereotypes, and more often than not, perpetuates them. If Black people are portrayed as ‘dangerous’ in the news like they so often are now, it allows cops greater excuse to over police typically Black areas and put more money into the prison system and its proprietors’ pockets. The prison system is a billion industry that preys on the vulnerable and makes million-dollar companies more money by paying low wages to prisoners behind bars, effectively making it easier for companies to earn higher profits while people struggle in jail. 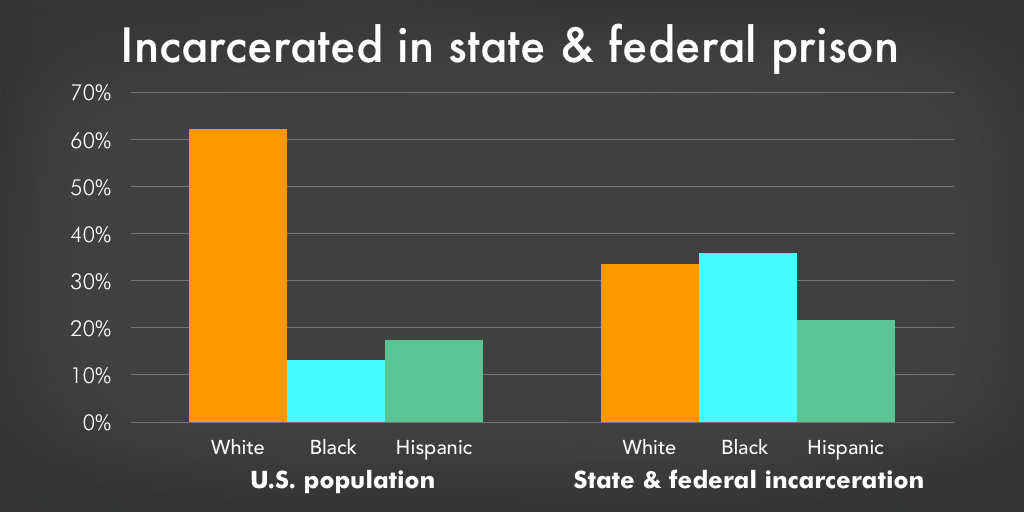 Moreover,  many groups of people that the government has also found threatening have similarly been targeted this way in history by both the media and government. Members of groups the government has found radical such as the hippies of the 1960s were also painted as dangerous and were eventually seen as the negative stereotypes the media pushed upon them.  By working with media outlets, the government can control the idea the greater public has of certain groups, therefore, allowing the government to nuclearize perceived threats and implant harmful beliefs into the minds of millions.

The media does more than just put people in jail; it makes it impossible for formerly incarcerated people to live their own lives. Because the public perception of criminals is so negative, many criminals cannot find jobs after being released from jail.

In fact, 27% of formerly incarcerated people are unemployed, compared to the national average of 5.9%. Prison is supposed to be a place of rehabilitation, yet there is no system in place to aid former prisoners reentering into society, often pushing them right back into habits that put them in jail in the first place. Statistically speaking, if a formerly incarcerated person cannot find a job within eight months of their prison release, there is a 33% chance they will commit another crime. According to a 2021 study, 2 out of 3 prisoners will be rearrested within three years of their original release from jail. While this is not directly the media’s fault, big news networks certainly are not helping by continuously describing convicted criminals as evil when so many were put into jail for nonviolent reasons.

Though this information seems daunting, change has never been closer with groups like Black Lives Matter spreading egalitarian beliefs in a way so widespread it rivals the popularity of the Civil Rights movement of the 1960s. Though change is difficult, it is on the horizon if we fight for it.