Once you’ve arrived in the iconic city of New Orleans, order an Uber to Pat O’Brien’s on 600 Bourbon Street, take a stroll, and take it all in. Listen to the sounds of jazz echoing in the streets from Maison Bourbon, breathe in the smells of rum and melon liqueur fuming from Tropical Isle, and take note of the beaming smiles radiating from tourists. 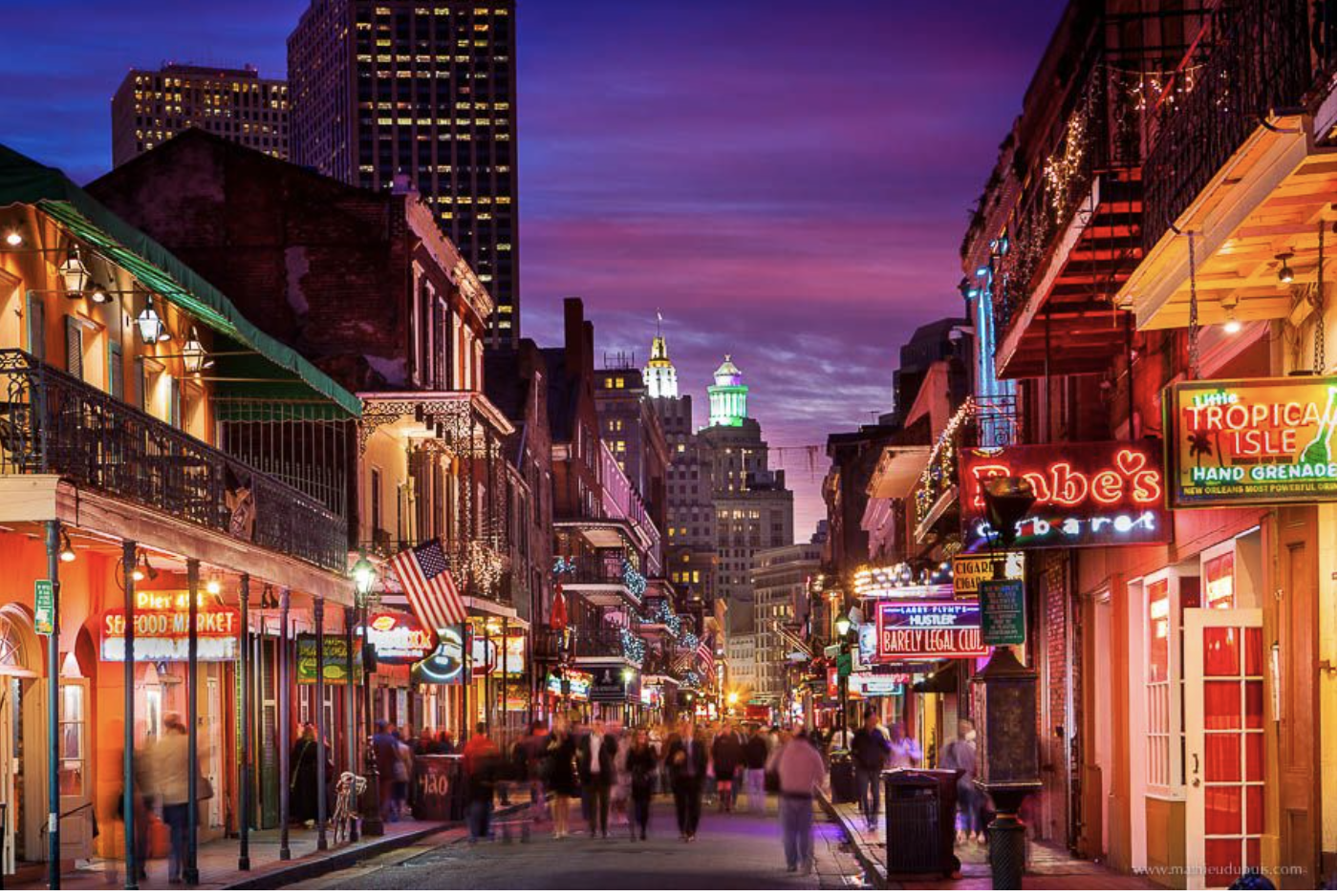 Now, walk a little further down to 423 Bourbon Street. There you’ll encounter rock ‘n’ roll, large neon signs, and half-clothed women standing in front of clubs such as the “premier Gentlemen’s club,” Hustler’s Barely Legal. While Bourbon Street is famously known for its live adult entertainment, this certainly isn’t the only place you can find entertainment like this. With just one click of the TV remote, you can watch Channing Tatum’s striptease in Magic Mike or Jennifer Aniston’s pole dance routine in We’re the Millers. Additionally, New Orleans isn’t the only city frequented for its adult entertainment. Stripping is seen constantly in mainstream media as well as in clubs throughout the U.S; yet, in 2018, clubs such as Rick’s Sporting Saloon, Temptations, Hustler’s Barely Legal, and Dixie Divas were all legally served. This legal action taken against these clubs was in response to allegations that had been simmering for years regarding human trafficking in the strip club industry. Despite the fact that police found no evidence of this, law enforcement still served legal notice to clubs. Following the charges, police raided the clubs, threatening to close many down. While police claimed these raids were to protect the city and the women from illegal activity, many people who work in the strip club industry believed otherwise. The attempt to close down the strip clubs on Bourbon seemed like it was intended to purify the city more, making it more “palatable for… tourists.” While the city was worried about cleaning up its image for the tourists, it was neglecting to consider its residents: the strip club workers themselves. Meanwhile, these very women helped to fuel the flourishing tourism on Bourbon Street today.

In the 1940’s and 50’s, New Orleans was deemed “The Most Interesting City in America”, with its main attraction being Bourbon Street nightlife. Tourists dressed up in glamorous attire to go see exotic dancers, risqué singers, and eccentric contortionists perform at clubs such as the Sho Bar, Casino Royale, and the 500 Club. Club owners recognized the untapped potential that the industry held and began competing with each other to see who could draw the largest crowd. Some of the women began creating unique acts in order to further their individual careers. One woman, Lily Christine the Cat girl, who was considered the top attraction on Bourbon, drew a crowd so large that the line extended an entire block even during a hurricane warning. 2018 was not the first time law enforcement tried to raid Bourbon’s strip clubs and shut them down. In the 1960’s, New Orleans’ district attorney, Jim Garrison ordered police raids of strip clubs in an attempt to “clean up” Bourbon Street.

Throughout history, stripping has been a highly stigmatized profession; therefore, women who are strippers are often not seen as respected professionals. Unlike other jobs, strippers do not receive sick leave, medical coverage, retirement funds or legal protection. Even worse, they’re often not seen as respected people. During a raid at Rick’s Sporting Saloon in 2018, police officers forced some of the strippers to change in front of them. When one woman resisted, an officer repeatedly told her that she “lost her right to dignity when she decided to become a stripper.” These raids inevitably shut down many clubs temporarily while zoning investigations were conducted and laws were enforced.

While others may not recognize strippers’ self-worth, strippers certainly know their own. The strippers began protesting in the French Quarter preaching “Hands off our jobs!” and “We are not victims.” While law enforcement reiterated that the raids were aimed at trying to protect both the women’s and the city’s safety, the strip club workers viewed this action in another light. They saw these raids as a blatant attack on their profession and an addition to the existing stigma surrounding it. 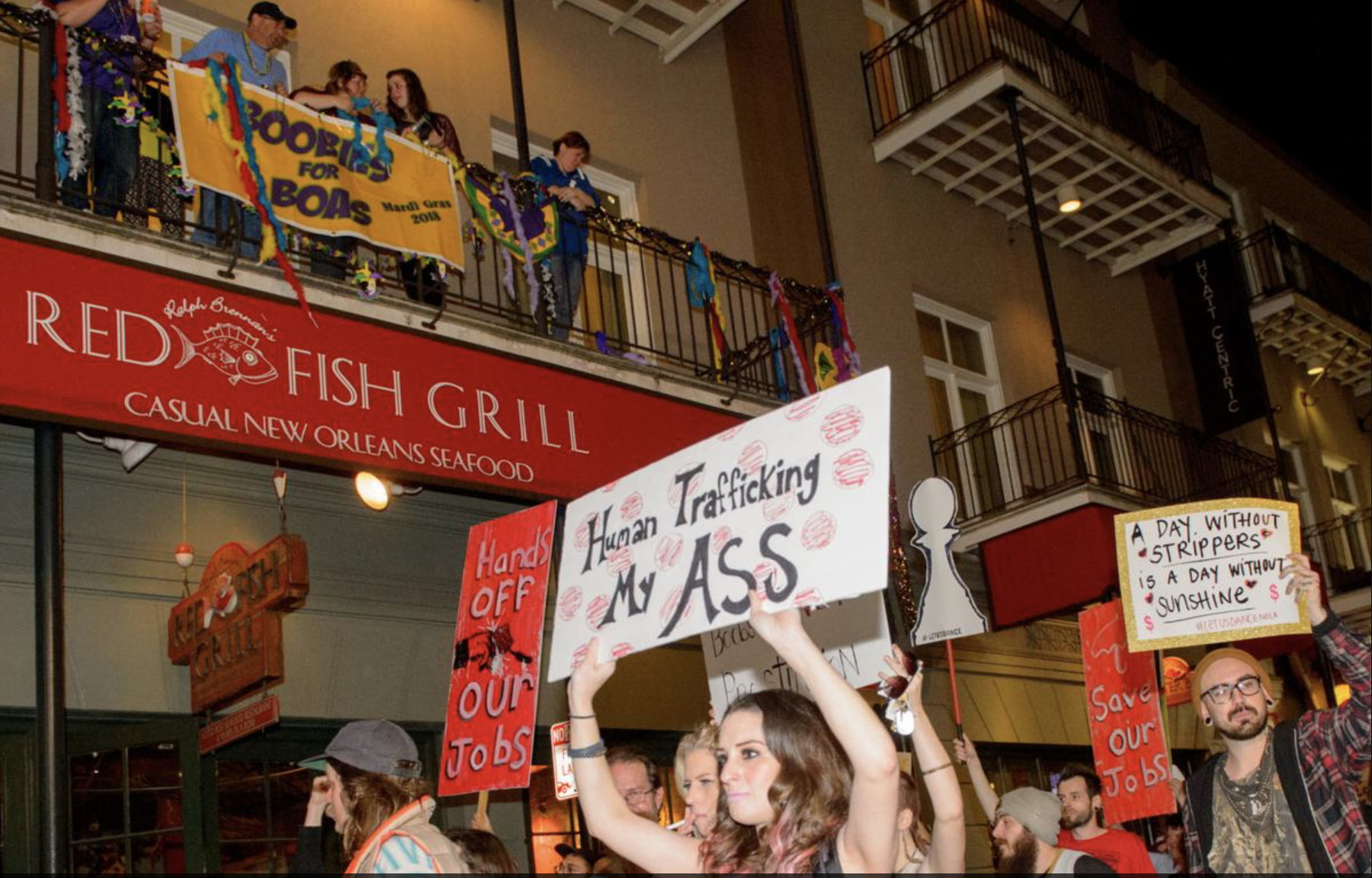 What is often disregarded in discourse surrounding the stripping profession is that it requires extremely hard work. The work strippers do is both physically and mentally exhausting. Physically, in the sense that hauling oneself up a twelve-foot pole in six inch heels takes a lot of practice and a lot of strength. Additionally, some strippers may give private dances to twenty-five men a night. People often don’t realize that to dance like this requires these women to develop stamina, flexibility and the ability to tolerate dozens of ejaculations. Stripping is mentally draining in the sense that strippers are expected to maintain high levels of enthusiasm and energy constantly while on stage or in private rooms.

Additionally, many people tend to criticize the stripping profession because they couldn’t possibly imagine someone wanting a job like that.  This myth can be disproven, as many strippers who protested in 2018, exclaimed that “[they] work in a strip club because [they] want to. [They] don’t need to be saved.” Some women who wanted to be professional dancers own the stage and feel empowered when stripping. Some choose the profession because it’s an exciting, non-traditional job to pay the bills. And, some women who end up in the stripping industry felt entranced by the glamorous life of partying it offered and just decided to stay. Just like any occupation, some people love it, and some people don’t.

When law enforcement tries to shut these clubs down to try and “purify” the city, they totally disregard these women and their profession. They’re not considering the fact that closing these clubs down leaves these women jobless, struggling to send their children to school or pay their rent. The social stigma surrounding the stripping profession also makes it difficult for these women to find a new job when “exotic dancer” is listed as their most recent employment.  These women shouldn’t be degraded for choosing to work in a strip club. One thing for sure is that these strip club workers know that they are a resilient community. They know that no matter what, “people will always need what [they] offer – intimacy without responsibility.”