Back to school week: A multigenerational community at a crossroads with ‘Doubles to Dorms’

Editor’s Note: School is back in session, including the universities in New Orleans. With an influx of students rushing into the city, there are going to be some hiccups; yet, how can we approach these difficulties with ingenuity and creativity that builds a community rather than separates it? Writer Gabby Abrams looks into multigenerational communities abroad and breaks down what we can glean from their successes. 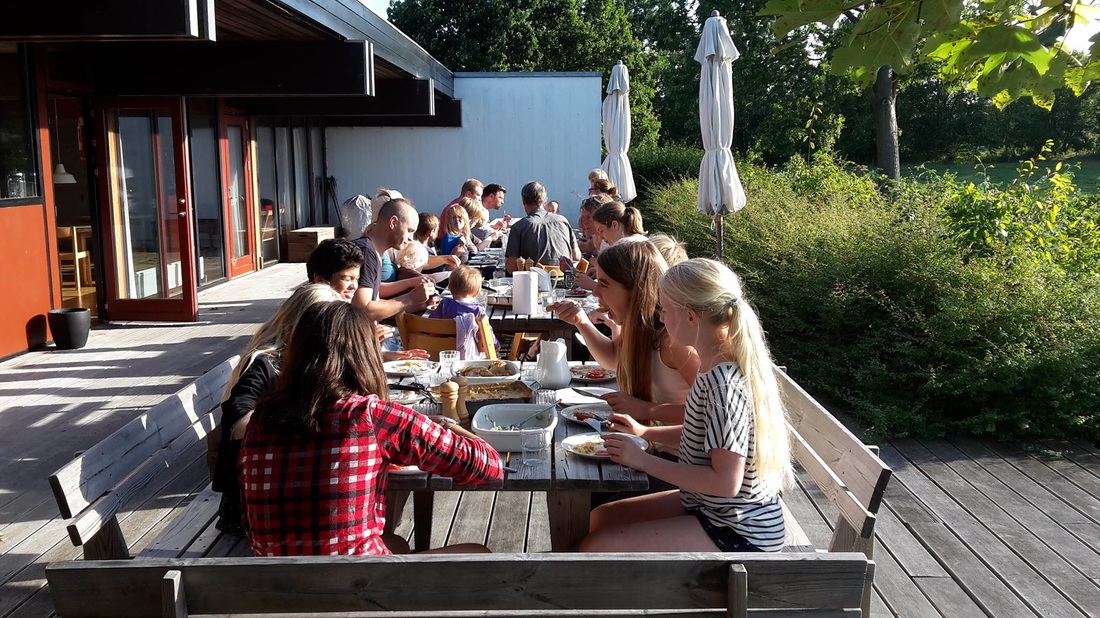 Members of Sættedammen enjoy an outdoor meal together.

Sættedammen in Ny Hammersholt, Denmark is the world’s first co-housing community. The community has 27 independent homes that are built to move like Lego pieces to the inhabitants’ changing needs. Members of the community ranging from children to the elderly participate in Sættedammen’s staples including communal dining, various holiday parties, and having campfires in the common area. Sættedammen provides companionship to lonelier aging adults as well as additional child care for young families.

A member of the community said “The impact of Humanitas is that it is creating the next generation of being a good neighbour. The takeaways are about values. A ten minute chat is valued and an arrangement is made.”

However, this growing trend toward multigenerational living does not come without its challenges. For instance, the university area neighborhood in New Orleans is currently at a crossroads with this issue as seen in the Doubles to Dorms movement.

Red and white signs reading ‘STOP DOUBLES TO DORMS’ stand in the lawns across historic New Orleans homes in the university-area neighborhood. The neighborhood, sandwiched between South Claiborne Avenue to the north and the Mississippi River to the south, extends a little over 2 miles. Stop Doubles to Dorms, shortened to D2D, refers to the trend of developers converting traditionally single-family homes into multiple units with many bedrooms for the purpose of renting to Tulane and Loyola students. 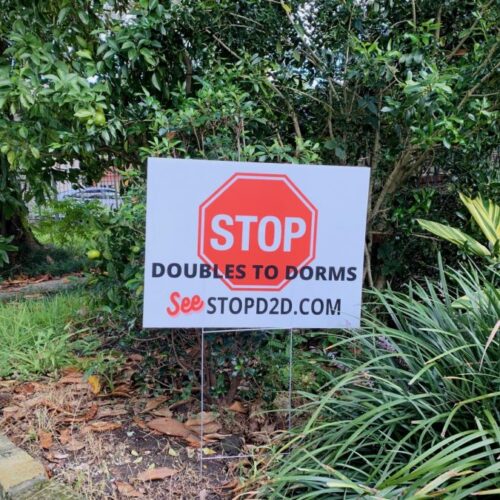 Stop Doubles to Dorms sign outside of university area home.

“We’ve lost a lot of families that had children that went to the local school” 20-year university-area neighbor Lee Barba shared.

Neighbors and D2D organizers Jill and Grady Fitzpatrick recounted many instances of inappropriate student behaviors in their neighborhood. The Fitzpatricks, who live off of Audubon St., have seen their street transform from  a mix of students and families to themselves (along with their two tween children) being the only family in the area. Even having students take their garbage to the curb on the correct day is a cause for celebration in the Fitzpatrick household.

“My kids could tell you a lot of stories of things that they’ve seen, and we kind of laugh about it, but I’m like, ‘This is not normal,” Jill shared.

Having the bass of speakers keep them up at night to having their neighbors do whippets on the front porch, is an alternative normal for the Fitzpatrick family.

So the question is, how realistic is harmonious living between students, families, and elderly couples in the university-area neighborhoods when the shift is turning much more rapidly toward the former? Can a bridge of mutual respect be forged between Gen X and Gen Z?

For neighbor Lee Barba, Tulane taking a more active role in enforcing code of conduct rules for off campus students would go a long way. The neighbors also shared sentiments that Tulane should go down Broadway St. at the end of the semester and clean up the trash from its students. However, they also believe that students need to take it upon themselves to make maintaining the neighborhood a priority.

“I think the students need to recognize that you want to have the character of the city, that’s why you came here, but to have fun for a semester or two…you’re kind of destroying it,” Ken Gelpi said.

Many students, however, are unaware of the damage they are causing to their neighbors, as they see the area as mostly including people of their own age and priorities.

Despite these challenges, fulfilling neighborhood relations, such as those seen in idyllic communities in Denmark and the Netherlands, are possible.

Jill Fitzpatrick shared that “some of our best babysitters lived next door.”

However, it may take an organizing body, such as Tulane, to facilitate these relationships and sense of mutual respect.

Through a social networking service, such as Next Door, university-area neighbors — young and old alike — can touch base on the noise, safety, upkeep, and general wellbeing of the neighborhood. Additionally, young families can find childcare from their Tulane student neighbors, an ideal that Sættedammen is based on. Tulane students can also provide companionship to older members of the community through connections in what they are studying. For instance, a database can be created to connect pre-med students with doctors in the area. This connection can result in mutually beneficial dialogue, networking, and relations between the neighbors. And the buck doesn’t need to stop here. In a city like New Orleans — known for its music and vibrancy — why not connect students and fellow residents alike with outdoor concerts from their very own neighbors? The opportunities for connection are wide and varied, from community art shows to Tulane football game watch parties.

Although there is no guaranteeing that students will ‘keep it down’ on school nights, these efforts will likely not be futile. Fostering community relations, especially with older generations, is an invaluable gift that benefits all those involved.