Editor’s Note: Taking a page from David Foster Wallace’s “Consider the Lobster,” writers in Kelley Crawford’s Alternative Journalism class at Tulane University chose objects that are rather ubiquitous. Then, they dove into the symbolic narrative those objects tell. Up next in the “Consider the _____” series is fried chicken.

Driving down South Claiborne avenue in New Orleans, you pass a Canes drive through with a line of cars spilling onto the street. Directly across from Canes, there is a McDonalds and KFC. As you continue down South Claiborne, you spot Chick-Fil-A, Popeyes and another Canes. A little further down the street, you notice a smaller fried chicken joint with a sign that reads “Church’s Chicken”. Lit up with lights, the restaurant has a few cars parked in front. Unfortunately, Church’s Chicken becomes lost in the scheme of all the fast, franchised restaurants, towering over one another. 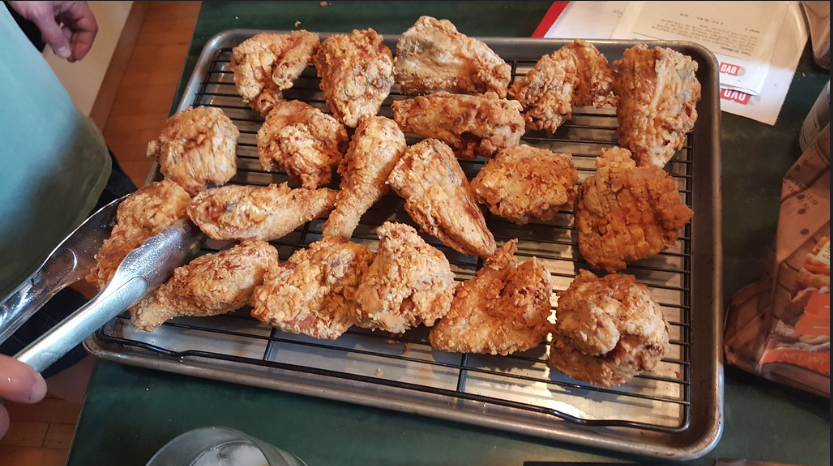 Traced back to Scotland and West Africa, the technique of frying chicken actually did not originate in the United States. While the Scotts fried their unseasoned chicken in fat, the West Africans fried their chicken—seasoned heavily— in palm oil. Scotts migrated and Africans were forced as slaves to the U.S., so when Scottish slave owners requested fried chicken, the final product was the seasoned fried chicken—the authentic African recipe. The micro-action— white Americans removing the African people from their homeland and forcing them to work as slaves—represents the macro-action taking place—the larger, wealthier franchises overshadowing and adopting recipes and food from the smaller authentic ones. For some southern slaves, there was flexibility in what they could cook. In turn, many slaves replaced their native recipes with indigenous North American plants that resembled African plants—like replacing the African yam with the American sweet potato. Most slaves also brought their own food with them so they planted their own seeds on American soil—like peanuts, which are known as “guba” on the West coast of Africa.) Through the combination of “the [food]and methods of African and Anglo-American cuisines, the lexicon of Southern African American food-ways was created”.

Once slavery was abolished, and Southern Black families began to move Northward, their culture also traveled with them. Another major contribution to the spread and identification of fried chicken and soul food took place in the mid-twentieth century as Black Americans identified with a multi-dimensional unity centered around their heritage as Africans, slaves, sharecroppers, and industrial workers. Willie Mae’s Scotch House, established in 1957, is one of the oldest and first NOLA fried chicken restaurants. Willie Mae’s was originally a barbershop and beauty salon in the front with a bar in the back. However, once their salon closed, bar customers demanded a restaurant addition. Because what else would drunk New Orleanians need? The restaurant was met with support from bar-goers and the community—and eventually Willie Mae Seaton earned the James Beard Award for “America’s Classic Restaurant for the Southern Region” in 2005.

As the fried chicken rave erupted, variations of chicken emerged as well. Chicken tenders—long fried chicken strips—and nuggets—bite-sized fried chicken—became staples of many chain restaurants. In the United States, four of the most lucrative fast food chains are chicken franchises—McDonalds, Chick-Fil-A, KFC, and Popeyes. In 2017, McDonalds’ earned $34,480.67 (in millions) across their 14,000 domestic stores—the most profitable fast food franchise. Furthermore, McDonalds employs 205,000 people— and while this may seem like a lot of people, the number of employees has actually dropped by 50% since 2012. This decrease could be attributed to the increase in technology–customers can order eat-in, takeout and drive through food all through an app. Additionally, the presence of self-serve kiosks decreases the need for employees, with the exception of cooking food and serving. Basically we’re decreasing the already minimal social interaction during the Coronavirus pandemic. Drive through and delivery options allow people to order, pay and receive their food in a matter of seconds. This is truly any chicken lovers dream: fried chicken at the snap of your fingers… or the tap of your texting fingers. 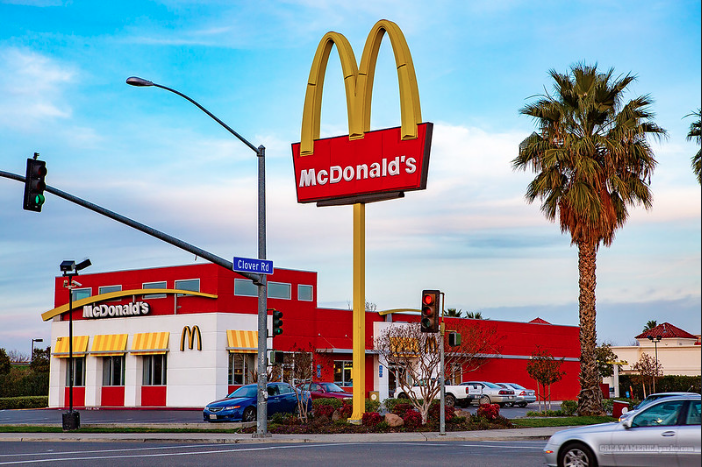 Because of the fast and continuous expansion of fried chicken franchises, authentic soul fried chicken can often struggle to stay afloat, especially now during the Coronavirus pandemic. K-Paul’s Louisiana Kitchen closed their doors in July of 2020 because of the repeated shutdowns during spring and summer. K-Paul’s, a classic and family-owned restaurant in the French Quarter, was established in 1979 and throughout the year has become a national sensation. While they were famous for their creole-approach to fried chicken—“Paneed Chicken Breast with Hot and Sweet Shrimp”—, the longtime restaurant couldn’t survive through the national shutdown. In contrast, McDonalds never shut down during the pandemic because they were considered “an essential business”. CEO Chris Kempczinski said that breakfast was the most impacted part of the day because so many Americans either lost jobs or were working from home. But, 95% of McDonald’s franchises were able to stay open because of their drive-through option.

While fast food franchises profit off of mass production of fried chicken, high-end restaurants have also adopted and inserted themselves into the soul scene. However, the commodification of soul food has led to a major problem: price increases. As soul food, like fried chicken,  has become commonplace in most cities, restaurants open and take a “hippy-like” approach to soulfood by presenting the food in a fancy way. By surrounding the food with a white tablecloth, nice decor, and locating yourself in a “nice” area of town, you can add a premium to anything and people will pay for it. However, by inflating prices, these foods have become less accessible in the spaces and neighborhoods that invented them. “‘It’s one thing to highlight the food, but when you separate it from the material, economic, social, political and racial realities that created it,’ things get dicey”, said Dr. Marcia Chatelain, a Georgetown University professor of history and African-American studies. Unfortunately, we see this very problem here in New Orleans. Coquette, among many others, is an intimate, contemporary-take on Southern food and offers fried chicken for $26.00.

While everyone has the right to cook whatever food they want, it’s important to acknowledge the history of the food and the process it took for the food to become the way it is today. Next time you’re enjoying fried chicken—whether from Chick-Fil-A or a NOLA soul food hotspot— consider the history and people this go-to comfort food comes from.