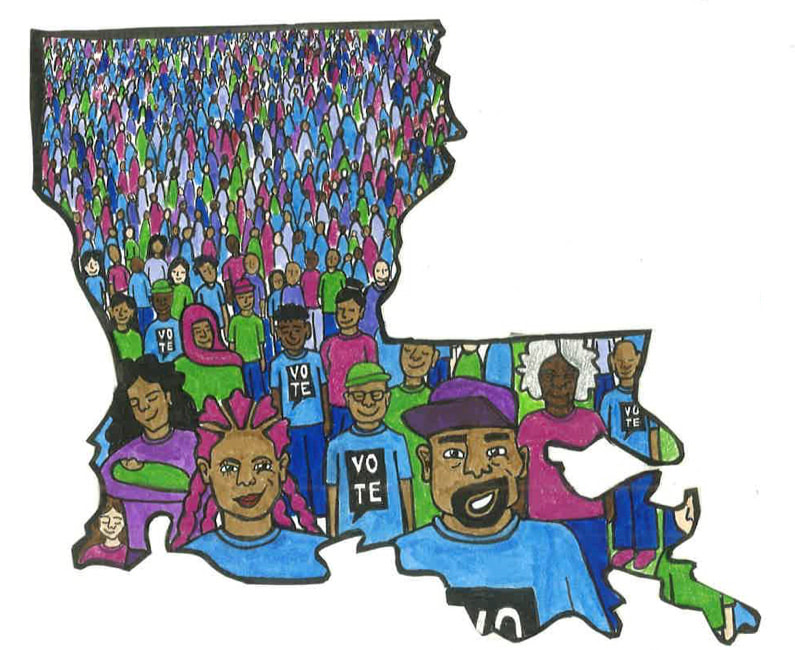 This semester I had the honor to enter spaces and meet people that I would not normally meet. Specifically, the headquarters for local grassroots organization Voice of the Experienced (VOTE) where I was able to meet the one and only Clyde T. Bacchus, featured in the audio attached. Though the relationships I have formed with these organizations and people are in their youngest stages of development, I plan to continue them. Context aside, the research I was able to do on the carceral nation that is the United States was hard-hitting and influential–capable of breaking the many ingrained subconscious stigmas I had concerning criminal justice.

To understand the micro, meso, and macro implications of an over-reliance on carceral systems, one must first understand the history behind why a system came to be in the first place. The following background is in no way a complete account of historical methods employed to achieve racialized social control within the Southern United States. Historical research was used to pinpoint important events and symbols that have influenced the disproportionately high incarceration rates of Black males.

Racial policing has been occurring since the 1724 Louisiana Code Noirs; however, it was not until 1845 that the first uniformed police force was formed in New York City. Thus, the slave patrols of many states could evolve into police forces and continue their reign. Especially after the Fugitive Slave Act of 1850 established a precedent for law enforcement to arrest and return suspected runaway slaves to their owners–the bill required it–this new institutional entity led the charge in hyper-focusing on Black people (Turner 1). When the 13th Amendment passed in 1865, it did more than abolish slavery and involuntary servitude; it created a loophole that outlawed neither slavery nor involuntary servitude except as “a punishment for the crime of which the party shall have been duly convicted” (U.S. Const. amend.13). The United States was now to rely on a new system of involuntary servitude, mass incarceration.

For the many years to come, grand acts of violence like mass public lynchings occurred weekly, border crossings were criminalized, and official police forces appeared around the country. The tension rose in the late 1970s and ’80s, with President Nixon and Reagan’s War on Drugs campaigns and the enactment of mandatory minimum sentences for drug possession (Criminal Justice Policy Foundation 1). Mainstream media painted a specific ethnic portrait of drugs and their users–heroin was for urban Black and Latino users, while prescription opioids were for suburban and rural white users (Netherland and Hansen 1). Minimum sentences for crack cocaine were largely associated with African American offenses, while powder cocaine was associated with Caucasian Americans. Comparisons between the sentencing guidelines are 100-to-1; an individual found with 5 grams of crack faces a minimum of 5-years federal prison, while an individual found distributing 500 grams of powder cocaine faces the same 5-year minimum. This further criminalized BIPOC people in the U.S. and led to a 49% increase in federal drug sentences for African Americans (Vagins and McCurdy 7).

Fast forward to the 21st century and witness the results of a racially motivated carceral movement. The Prison Policy Initiative (PPI) crafted a Louisiana prison profile based on 2010 U.S. Census information to calculate that Louisiana has an incarceration rate of 1,052 per 100,000 people. These can be people in prisons, jails, immigration detention, or juvie facilities, but most LA residents are in state prisons waiting for trial (PPI 1). Louisiana’s incarceration rates are higher than the U.S., but also higher than other high-income nations like the United Kingdom or Portugal (PPI 1). Black Americans, specifically Black men, are much more likely to be imprisoned and sentenced than their Hispanic or White counterparts (Gramlich 1). Even though Black adults make up only 32% of the LA adult population, they represent 66% of the state’s sentenced prison population (PPI 1).

Timelines of oppression cannot exist without stories of resistance and revolution. This is what charged VOTE to unite over incarcerated folk’s rights in and out of prison. VOTE is run by currently and formerly incarcerated people (FIP) and seeks to change the criminal justice structure through community engagement and advocacy. They are an incredibly important safety net for people re-entering society–in my interview with Clyde, I learned about the state’s lack of support for those being released after serving long-term sentences.

Prison reform, prison alternatives, and prison abolition are all different ideologies that can aid in ending mass incarceration in the United States and beyond. VOTE chooses to take a reform approach, the goal being to end mass incarceration. They claim the only way to truly achieve this goal is for policymakers to involve the voices of previously or currently incarcerated humans.

However, before abolition can be discussed, it must be acknowledged that prison is a taboo topic in the U.S. Americans often find themselves torn between believing that prisons should primarily focus on rehabilitation or believing that carceral punishment is inherently a part of the criminal justice system (RTI Int’l. and Zogby Analytics 1). This perception gap may be why VOTE refers to our country as having a criminal (in)justice system. Nevertheless, this gap stems from more than mixed messages, it comes from a flawed order of priorities. The Sentencing Projects’ Nazgol Ghandnoosh, senior research analyst discusses the original four purposes of prison sentencing: rehabilitation, incapacitation, retribution, and deterrence (Perfas et al. 1). Incapacitation throws people in cages to prevent future harm, and deterrence is meant to prevent the incarcerated person from committing other crimes. However, in a country where every 1 in 4 violent offenders gets arrested again, relying on the same systems to provide rehab will only exacerbate the issue (PPI 1). According to Ghandnhoosh, the textbook’s four ideals of incarceration are not conducive to the concept of restorative justice (RJ), a practice that seeks to alleviate grief felt by victims of crime via allowing perpetrators to take responsibility for their actions. To achieve this goal, the perpetrators, victims of crimes, and community members all interact. RJ assumes that imprisonment will not heal a victim. Perpetrators are allowed to engage in reintegration and rehabilitation activities to give restitution to their victim(s). Notably, RJ is not a single defined thing and can vary in the method and geographical context.

VOTE is a practitioner of RJ and attempts to improve aspects of an incarcerated person’s life, focusing primarily on slow-mediated change. They can act as a foundation and grounding force for individuals re-entering society. While RJ manifests in many different ways within this organization, solidarity and community is the pervasive and grounding force that exists throughout it.

The effects of Covid-19 on incarcerated individuals
Health