Pralines: more than just a candy 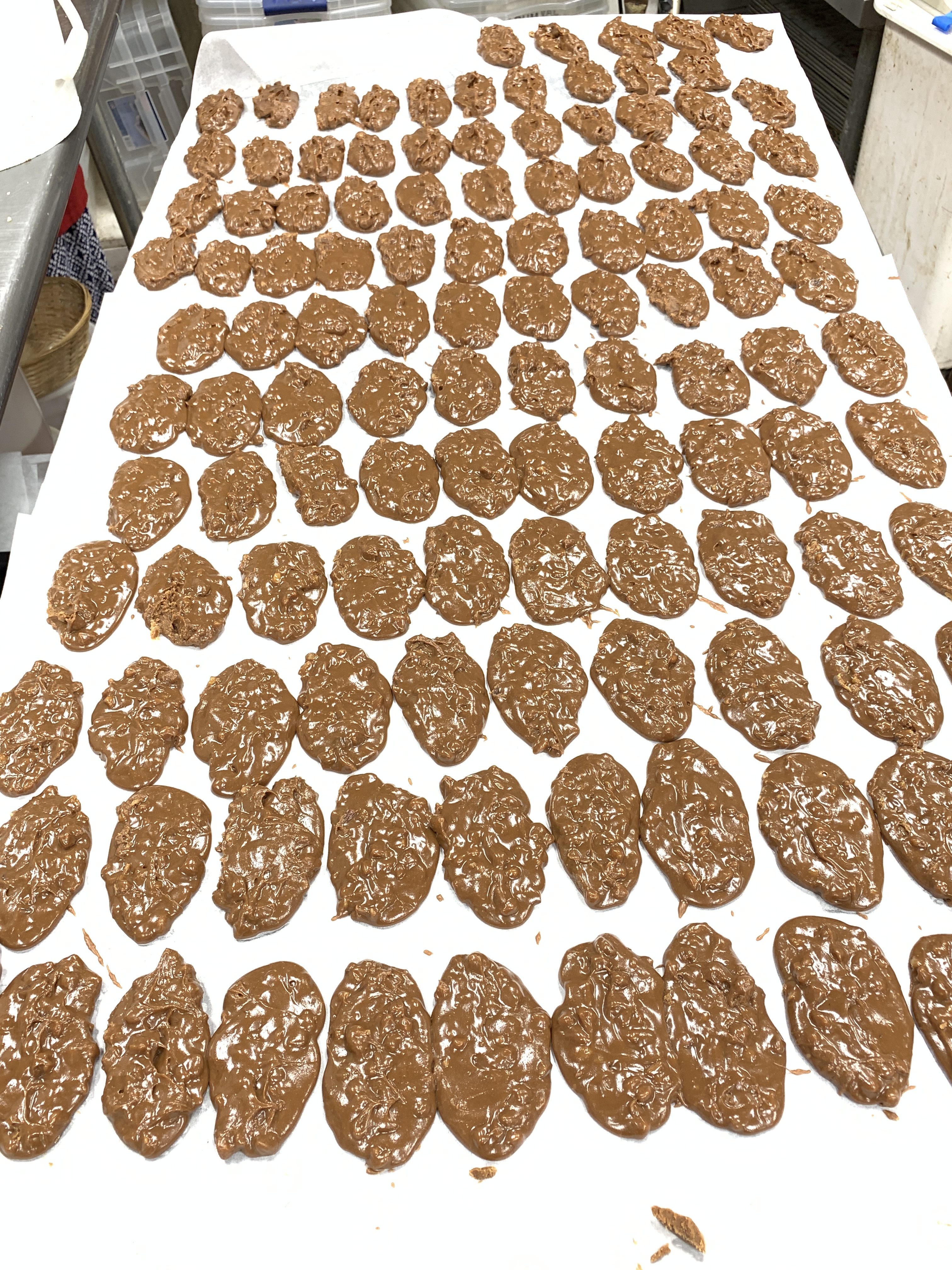 The Pralines of Loretta’s Authentic Pralines. (Photos by: Katie Burke)

Dessert is ingrained in the city of New Orleans’ culture — from bread pudding and bananas foster to beignets — the official New Orleans website even has a page dedicated to classic New Orleanian sweets But the New Orleans praline, which consists of sugar, milk, butter, and pecans and tastes like a nuttier version of fudge, is not simply tourist fodder. The delicious treat has a history that connects to the city’s relationship with sugar.

Before sugar was a three billion dollar industry in Louisiana, the production of sugar was never expected to grow exponentially. Sugar was merely a luxury item in Europe, as its production required hours of backbreaking labor. Eventually, white Americans, such as the city’s first sugar plantation owner Jean Etienne de Boré, found a way to complete the grueling work they did not want to do: make slaves do it. As a result, the sugar industry became the most lucrative crop in the south. Sugar cane is still a major cash crop for Louisiana in the 21st century, contributing more than $2 billion annually to the state economy. As a result, sugar and New Orleans formed an inseparable bond that led to the creation of pralines, with roots that can be traced back to enslaved Black women in the city.

While the exact origin story of pralines is unknown, it is agreed upon that pralines originated in France, named after César, duc de Choiseul, comte du Plessis-Praslin. However, the French version of the praline is different than the ones seen in tourist shops throughout the French Quarter. The original praline was made with almonds and grew in popularity throughout Europe during the 1700s. In New Orleans, however, there were many more pecans than almonds because a formerly enslaved Louisianan named Antoine figured out how to grow high-quality pecans from the roots of lesser-quality trees. Antoine’s discovery led to a new version of pralines that replaced the almonds with pecans, and pralines became a classic New Orleanian dessert. Tourists walking around the French Quarter have seen pralines on display at various stores, right next to the beads, hot sauce, and witty t-shirts. Additionally, there are stores like Leah Pralines, which has served fresh pralines from a family recipe since 1944. 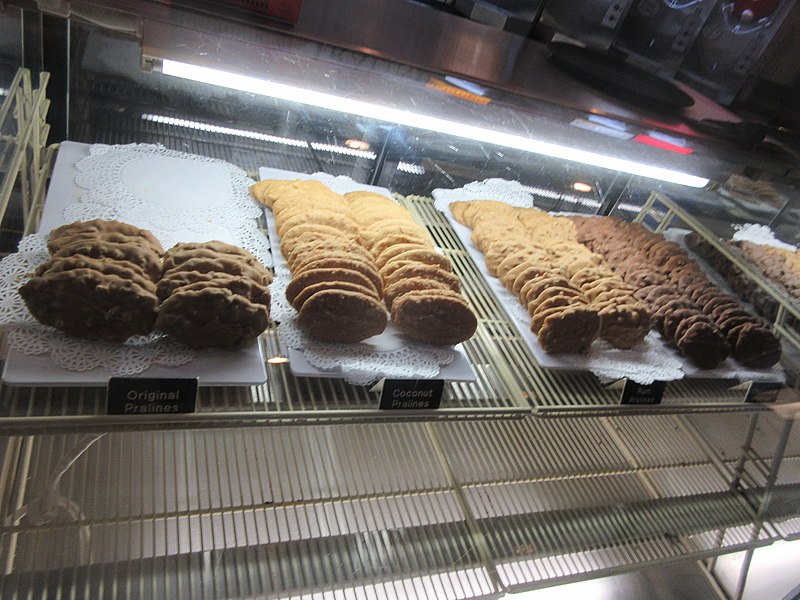 The praline evolved because of the “culinary genius of African-American women,” says praline scholar Chanda M. Nunez. Even though the earliest advertisements for pralines come from 1862, historians suggest that the treat was invented, and likely sold, much earlier than that year. Slavery in Louisiana followed the French rules of code noir, which gave greater rights to slaves than in British and Dutch states, which allowed enslaved Black people to set up their own markets on Sundays where they could sell goods alongside free Black people. The city’s abundance of sugar and pecans meant slaves could turn unwanted leftovers into a sugary treat to sell at the market on their day off. The praline became one of the earliest street foods in America.

In the mid-to-late 19th century, it was common for Black women, known as “pralinieres,” to sell pralines in the French Quarter. These les gens de couleur libres (free people of color) were some of the country’s earliest entrepreneurs, as being a “praliniere” was a way for Black women to make their own money with no strings attached. By the 1890s, pralines found their way to fancy uptown dinner parties, as documented by numerous articles in The Daily Picayune, but the majority of the praline vendors still operated in the French Quarter as “pralinieres” selling them on the street. Each “praliniere” had their own section of the Quarter in which they operated, much like the street performers do today. In a sense, they were the street performers of their time.

As tourism expanded in the early 20th century, the praline industry expanded as well. White people began to sell pralines. In order to attract customers to their stores, praline vendors used the image of the “mammy,” the stereotypical caricature of a loving Black woman whose maternal instincts make them content in their servitude. It was a marketing ploy that spoke to the customers who remembered a romanticized version of the south in which slavery was insignificant. The image of the “praline mammy”, consisting of a Black woman in a long skirt, apron, scarf, and a tignon, was often the logo for praline sellers. Some businesses put life-sized images of “praline mammies” in front of their stores to attract tourists who posed alongside these depictions of the original praline vendors. From around 1918 to the 1970s, it was normal for white-owned candy stores to financially capitalize off the “praline mammy” caricature. Even in 2014, at least one candy shop, Evan’s Creole Candy Factory, still used racist “mammy” imagery in its praline packaging.

Today, it is uncommon to find praline vendors on the streets of the city and the ones that do exist avoid any “mammy” imagery. Most pralines are sold in cheesy tourist shops throughout the French Quarter, and they come in an array of flavors, from coconut to sweet potato. Yet, Bernadine Lady Rogers, a longtime candy maker at Leah’s Pralines, has been making pralines her entire life and didn’t even know that praline shops existed until she was in her teens. Even though most New Orleanians don’t seek them out from stores, pralines are still very much a part of the city’s culture and history. New Orleans was once the country’s capital of the sugar slave trade, and Domino’s sugar still produces its ubiquitous four-pound yellow paper bags with the company’s logo at a rate of 120 bags a minute, 24 hours a day, seven days a week, just minutes outside the French Quarter. And yet, the praline is a bright spot in the city’s relationship with sugar.

The Hot 8 “Get Up” Footloose style: No dancing allowed
Music