“Lil Juvie” is used in casual language, though not everyday, because it’s  interchangeable with other terms of endearment. This phrase is most commonly used among people of ethnic cultures, specifically African-Americans.  It’s used to refer to someone who is in a relationship with someone significantly older than themselves. The phrase is usually used by the older individual in the relationship to refer to the younger person. 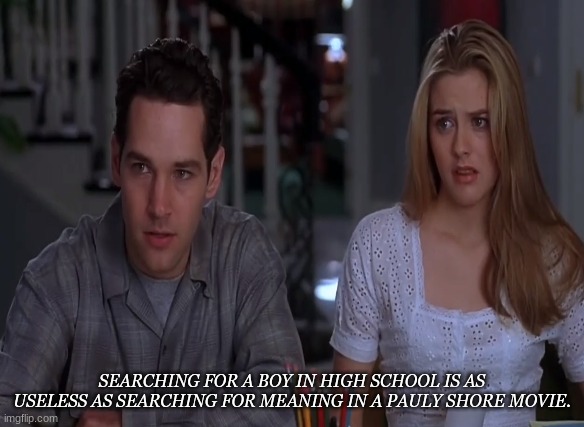 Remember Josh and Cher? The age gap between these two was not highlighted excessively in the movie, Clueless, but some viewers believed that a relationship between a 16-year-old 10th grader and a 19-year-old college student might fall into “lil juvie” territory. (Meme by: Adia Gardner)

There’s a party tomorrow night (post-COVID of course), and Chris asks his best friend Nathan if he’s coming. The party is a graduation celebration for one of their close friends, and the boys were both expected to arrive at the party bus by 8:30 pm. Nathan looks up at his friend after he explains the details but then replies , “Nah, bro I can’t come, my lil juvie is coming over tonight.”

Chris returns Nathan’s stare and begins to sneer— a look full of amusement and second-hand anxiety. “I think you need to leave her alone, before you catch a case dude. She’s too young.”

As much as Nathan didn’t want to believe it, Chris was probably right. She was a sophomore in high school and Nathan and Chris just graduated and were college bound. She was barely 16, and Nathan was near 19 years old; the age gap between them could eventually catch Nathan a case (get them in trouble with the law).

“Lil juvie” is derived from the words, “little” and “juvenile.” Juvenile was first recorded in 1625, but the word was later shortened into the slang word juvie.  These words were originally used to describe a person under 18 years old who violated the law. The original implications of this word heavily affected its evolution into the phrase “lil juvie”. The older person in the relationship with someone underage, according to law, is technically the individual committing the crime; however, the younger is referred to as the lil juvie —the little criminal. The reference to youth has been preserved and arguably emphasized in the phrase “lil juvie”.

And here’s a tik tok of a “lil juvie” relationship that we just love:

An open letter to Miriam Haart
Entrepreneurs and Innovators

Life Quest(ions) 2021: Does happily ever after exist?
Gender and Sexuality