Editor’s Note: To get you in the holiday spirit, we will be running holiday articles up until the big day! Many of us think of a classic Dickensian Christmas during the holiday season, but what if we make that Dickens Christmas more Charles Dickeneaux? Adriana Lopez will let you know. This piece was originally published on NolaVie on December 20, 2011. 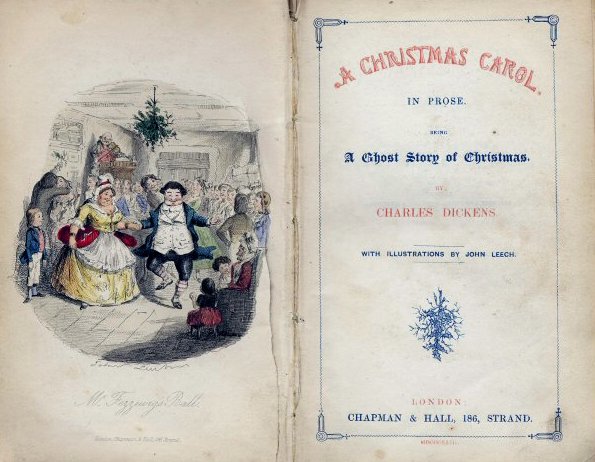 What if A Christmas Carol came to New Orleans? (Photo: Wiki Commons)

The illustrious and glorious city of New Orleans was redeveloping as a hotbed for growing businesses, due in large part to an emerging group of entrepreneurs and innovators who have relocated to the city post-Katrina. Even during a national economic recession, the city remained relatively unscathed and employed.  The residents were slowly learning of this growing community of business startups, and embraced the eager and creative group.

However, there was one person, Innovator Scrooge, who did not believe in the contribution these individuals had made, nor did he care about them.

Scrooge was an old New Orleans businessman who was in no way knowledgeable about the young, small business owners in New Orleans. He cared only about the larger, established businesses in the city that had been around since the dawn of time, and often thought that the younger entrepreneurs were doomed for failure.

On Christmas Eve, while having his usual Friday lunch at Galatoire’s, Scrooge became particularly angry when a friend partially accredited the entrepreneurial community for New Orleans’ recent high ranking in the Wall Street Journal’s study of “Best Cities for Business in 2011.” Scrooge adamantly argued that these “entrepreneurs” were not establishing legitimate businesses, unlike some of his peers who had built large construction and waste management empires.  He also used quote hand gestures when he referred to the entrepreneurs, as if to imply that they were not real.  Convinced that these young professionals worked out of their parents’ basements, he continued with his diatribe before furiously leaving the restaurant, and heading home to spend Christmas alone.

Upon returning home, Scrooge was visited by the ghost of his deceased business partner, Jacques Marley, who warned him that if he continued to be so close-minded about this ambitious group of young CEOs, he would see his beloved city of New Orleans lose its charm and turn into urban sprawl.

He, of course, ignored the warning and went to sleep, attributing his hallucination to the multiple Old Fashioneds he drank for lunch.

Later that evening, Innovator Scrooge was visited by the Ghost of New Orleans Past, who took him back to a pre-Katrina New Orleans. While he had lived in New Orleans his entire life, he quickly forgot about the perils the city was faced. For a moment, he though the spirit had taken him to a banana republic, with impoverished communities, corrupt local government, and a declining public school system. Even with the deteriorating infrastructure and gorge-like potholes, the residents, including him, seemed innocent and blissfully unaware of their Third World status. Still, the only high ranking the city ever received was on a list of the most dangerous cities in the world.

He returned home, back to December 24, 2011, convinced that it was all an alcohol-induced nightmare.

He was then visited by another spirit, the Ghost of New Orleans Present, who took him to an unfamiliar downtown office space where at 9 p.m. many young professionals were still hard at work on their laptops.  Even though most of them had been there for 12 hours straight, they were all happy to be working together, asking for one another’s advice while building their digital creations.

Scrooge was impressed by how ambitious these young individuals were, and even more impressed by the person they all worked for.  He needed to learn more, and asked the spirit to introduce him to their tyrant of a boss.

The spirit told him that they didn’t have a boss, nor were they still at work late because “the man” forced them to stay there. They all worked for themselves – they were all entrepreneurs who were building startups.

Scrooge was baffled by the fact that they were not in an old dingy basement.

He learned that these individuals were all working on separate projects in different sectors that included digital media, technology, fashion, photography, finance, and even education, just to name a few. However, they all had the same goal– to build their small enterprises into large businesses that could eventually create jobs, industries, and wealth for New Orleans.

The spirit then explained that the startups and entrepreneurs contributed to the economic development and recent growth in the city, evident from the many high business rankings New Orleans received this past year.

In the last year, the ghost explained, Louisiana ranked among the top five states with the highest rate of entrepreneurial activity, with New Orleans being 40 percent above the national average in start-ups per capita.  And, while New Orleans has yet to harbor a Fortune 500 headquarters, the city is welcoming small businesses and small divisions of large corporations at a rapid rate.

Other rankings from the year include No.1 city for information jobs by Forbes, No.2 city for all jobs by Forbes. Southern Business & Development awarded New Orleans its Major Market of the Year award. With several other business awards, Louisiana’s unemployment rate remained well below the national average at 7 percent, whereas the rest of the country averaged 9 percent.

Besides benefits such as low cost of living, high quality of life, and non-stop entertainment, aggressive government tax incentives have lured small businesses and large industries alike, including film and digital media.  The influxes of these businesses, production facilities, and film crews have all contributed to the economic development of the city through the money that is circulating within the state and going toward some evident changes, such as building new infrastructure and repairing roads.

Some non-profit businesses have even helped the education system in New Orleans through the creation of blighted building programs, and the growing economy has also led to a reformed education system. Along with federal funding, donations from individuals who believe in the city’s growth and the in-migration of people have also contributed to the reform in public education.

It was becoming evident to Scrooge that even the small startups and young entrepreneurs were contributing to the growth of his beloved city.

He was then taken by another spirit, The Ghost of New Orleans Future, who showed him what happens to New Orleans if he continues to discourage the growth in the community.  What the spirit shows him is a city that still has not recovered from Hurricane Katrina, even 20 years after the devastating storm.  Most of the population still gone, none of the city has rebuilt any of its infrastructure, buildings are still blighted, and education even worse than before as evidenced by the high illiteracy rate.  The charm of New Orleans is gone, with no small businesses to sell the unique locally made products, Freret Street is blighted and dangerous, there are no film crews or young creative professionals stirring excitement in the city, and only the Tchoupoltoulas Wal-Mart stands.

Only then could Scrooge learn to appreciate what New Orleans had become and what it took for the city to get there.

After his epiphany that Christmas Eve, Innovator Scrooge woke up a transformed man, and vowed to support the young entrepreneurs in New Orleans. He realized the contributions they are making to the city create long-term effects and have helped to make his beloved city the compelling, improved city that it is today.

Rural Revolution launches local entrepreneurial program on Broad
Uncategorized
We use cookies to ensure that we give you the best experience on our website. If you continue to use this site we will assume that you are happy with it.Ok