Hear/Here: The sounds at Muriel’s, a two hundred and fifty-year-old haunted restaurant 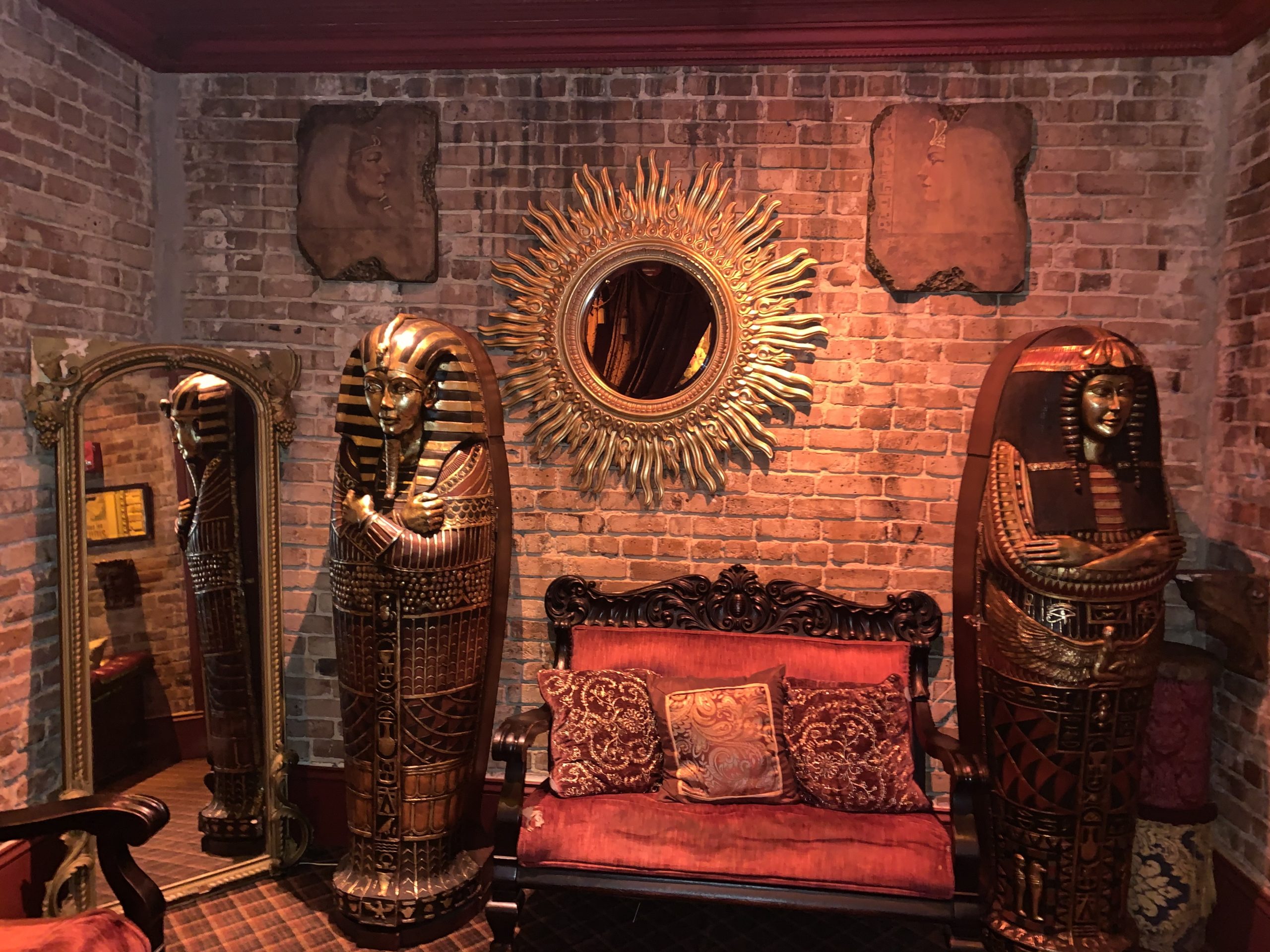 The haunted séance room on the second floor of the restaurant Muriel’s at 801 Chartres Street is a famous attraction that has magnetized swarms of occultists and paranormal investigators. Through the analysis of sound in the séance room, it is possible to gain a better understanding of why humans are fascinated with fear. As humans we cannot digest fear in its purest form, and the sounds at Muriel’s show how commercial elements of the restaurant help guests rationalize the perceived fear in order to maintain the entertainment value of the restaurant and increase its commercial viability.

The hypnotizing synthesizer music dominated the room. The sound begins with a low-pitched tone, which is characteristic of the lower side of the synthesizer, and it then gets higher in pitch, note by note, before going back down to the original pitch. Through the notes, the story of the property comes alive. The deeper pitched notes are calming and represent a period of peaceful domesticity on the property after it was purchased as a “dream home” by Pierre Antoine Lepardi Jourdan (1). The deeper notes bring ease to the listener by slowly accommodating to the listeners’ senses, much like Jourdan and his family accommodated themselves in their beautiful home. This provides a contrast from the higher-pitched notes, which suddenly attack the senses and cause the listener’s heart rate to rise.

It was interesting to see how the higher notes brought upon a greater sense of unease while listening. One study by UCLA evolutionary biologist Daniel Blumstein looked at how our brains recognize music as scary. The answer according to him lies within “our animal instincts” (2). The study looked at the reaction of people to two groups of music: “a group of emotionally neutral scores and scores that incorporated nonlinear elements” (2). Nonlinear noises are extremely high pitched sounds, often used by baby animals to grab the attention of their parents, and the researchers theorized that such noises also evoke a fear response in humans. The study found Blumstein’s theory on nonlinear noises to be true with the conclusion that “musical pieces containing nonlinear elements elicited the highest level of emotional stimulation, as well as the most negative feeling” (2). The nonlinear noise from the higher-pitched tones of the background music at the séance room helps reveal the darker aspects of the story that took place in this space. Jourdan had a gambling addiction, and it was that addiction that cost him his home (1).

The music reached the highest pitch, and that was the point where it sounded the most terrifying as “Jourdan tragically committed suicide on the second floor in the same area where Muriel’s Seance Lounges are situated today” (1). The notes became lower and lower until it reached the lowest note and the sound repeated.

The music playing in the room at Muriel’s utilized nonlinear noise and other elements of noise to elicit a fear response in visitors. This helps build the entertainment value of the room, where the occultist elements are brought to life as the pitch of the music gets higher and as the notes of these varying pitches overlap each other to make dissonant sounds that activate the fright response in listeners. It is fascinating to see how the negative response of fear attracts people.

To understand how the concept works, it is important once again to look at human evolution. Fear was an important response that helped our ancestors survive the dangers of the natural world. As Rachel Feltman and Sarah Kaplan describe in a Washington Post science column called “Why do people like scary movies and haunted houses?” they state that, “our ancestors didn’t get any points for being super chill when they encountered packs of hyenas”(3). For many people, fear activates a stress response that could be damaging physically, but as the article describes “if fright doesn’t utterly wreck you physically, it can feel kind of amazing”(3). As Margee Kerr, a sociologist and author who studies fear, explains it, “we enjoy fear as a distraction and calling up our flight-or-flight response tamps down our conscious thinking”(3). For many people, fear-inducing activities provide them an escape from daily work and family stresses. These social activities also provide an opportunity for social bonding, and Kerr describes this aspect by saying, “the shared intensity [of a frightful experience] can also trick you and your friends into feeling like you’ve accomplished something as a group”(3).

This aspect of fear-based activities provides a social basis and in connection to Muriel’s provides a justification for how the séance room works in a restaurant setting. Friends can go to the restaurant, enjoy a meal together, and then finally, visit the haunted séance room to feel a sense of group accomplishment. Humans are able to engage in fearful activities for the sake of entertainment because “when we’re in a safe place, we can interpret that threat response as we do any high arousal response like joy or happiness”(3). To understand this point within the context of Muriel’s, it is important to return to the analysis of the sounds to see how over time the restaurant has built a safe space for its patrons around the horror elements of the séance room.

As the eerie music fades away, and the continuation of the story occurs. The sound of the eerie music is replaced by the common pentatonic scale of a guitar and the popular music elements of the bridge and chorus of a pop song. This music represents the increasingly commercial nature of the building. The purpose of playing pop music is to make the restaurant have a strong social sphere, and this idea also has a scientific basis that influences customer interactions. A study from the University of New South Wales looked at the impact music had on the perceived atmosphere and purchase intentions at a restaurant (4). The results from the study found that the presence of music, with differences among types (jazz, pop, classical, etc.), led to customers purchasing more and having a better perception of a restaurant (4).  The upbeat pop music starts to play. After Jourdan’s death, the home was purchased by “Julien Poydras, who was the President of the Louisiana State Senate”(1). Even after Poydras died the home remained in his family for several generations until 1891. The guitar riffs of the pop song playing from the downstairs dining area become louder. In 1891, Peter Lipari purchased the property and converted the building to its modern structure, the building operated as the “Royal Club which was a drinking club of New Orleans notables” (1). The guitar solo now transitions into a more upbeat and repetitive drum and guitar duet.

In 1916, Frank Taormina converted the building into “a restaurant called The Spaghetti Factory, and then in 1974, the building became the Chart House Restaurant (1). The singer, who was singing at a subdued tone, enters the chorus of the song and sings with exuberant energy, and the chatter of the patrons of the restaurant serenades him. In 2001, the restaurant was renovated into Muriel’s, and “the renovation tried to remain faithful to the original historic design of the building as a prime private residence” (1).

Now the eerie music comes back on and plays at the same noise level as the guitar music. From a visitor’s viewpoint, the séance room is an unsettling experience, but it becomes an enjoyable one because the guests are able to rationalize the unsettling horror of the location within the context of the restaurant as a “safe place” (3). As Kerr explains “when we’re in a safe place and we know it, it takes less than a second for us to remember we’re not actually in danger. Then we switch over to enjoying it. It’s a kind of euphoria” (3). The pure horror experience of being in the room Jourdan committed suicide in could provoke a panic response in people, but recognition of the restaurant downstairs provides a welcome return to reality that makes the experience of the séance room enjoyable.

The recording goes and the pop music drowns out and the eerie music plays on till the end. This symbolizes that despite all the commercial distractions there remains the fact that over a century ago Jourdan had committed suicide in that very room. The sounds experienced at Muriel’s reveals much about the character and history of the building. Muriel’s is a successful business, and its business model relies on combining our fascination with ghosts and horror elements within the sphere of a rational dining experience. Sound guided and shaped this experience. The impacts of frightening sounds are deeply rooted in our evolutionary past. Sound can influence our emotional reaction to things, such as being afraid of scary noises or good music leading to people ordering more expensive cuisines. The sound helped shape the experience at Muriel’s, and the only unfortunate part is that there weren’t any sounds from the ghost sitting beneath the stairwell to enhance this experience even more. 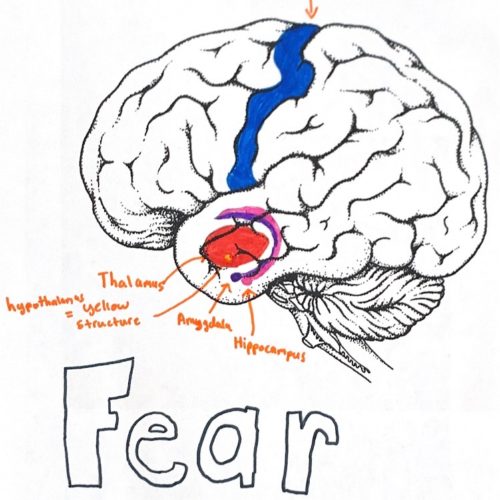 This is a diagram of brain areas activated in the Fear response. 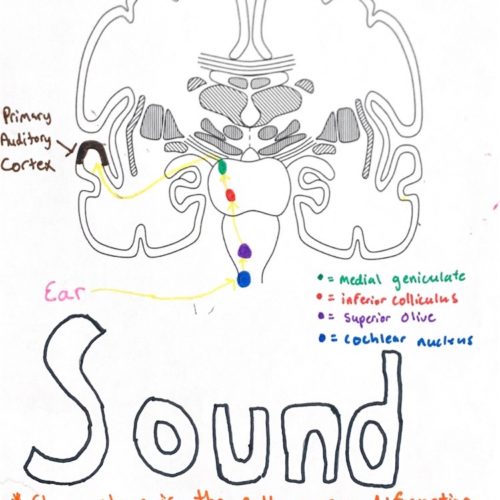 Representation of the sound pathways to the Brain.