Bursting bubbles : Disparities of the Trans-experience in NOLA

On one eventful night, while my friends and I were hitting the worn pavements of the historic downtown, I noticed a small group of flamboyantly dressed friends weaving through the streets. One was a (transgender) man who had surgery scars peeping out from the sides of his low-cut tourist tank top, and the others were fierce (transgender) women who had glitter fused with sweat plastered to their faces. As they made their way through the street, they received various slandering cat-calls from unknown sources hidden amongst the crowds. While it seemed like they rolled off these catcalls, they started to huddle more nearly together as they quickened their pace, held each other’s hands more tightly, and the light dimmed from their eyes a little bit. Furthermore, everyone who witnessed what happened didn’t do anything to identify the source, counteract the slanders, or approach the friends; it was treated as if it was a normal occurrence and part of daily life.

There were many questions that ran through my head as I analyzed the situation, but the one that kept recurring was: in a city that boasts and celebrates LGBTQ+ pride through parades, a vibrant night scene, and neighborhoods abundant with rainbow flags, is New Orleans actually a safe place for people identifying as transgender? What is the true reality of the lived experiences of the transgender community within this city?

Of the 330,509,997 people who live in the United States, only 13,042,000 of them identify as LGBT+, which is about 4.5% of the national population. Within this demographic, approximately 6.9 million LGBT+ identifying citizens reside in states that don’t lawfully prohibit sexual and gender identity discrimination. Of this population, it’s estimated that there are 390 transgender people per 100,000 and almost 1 million total transgender individuals in America (5). 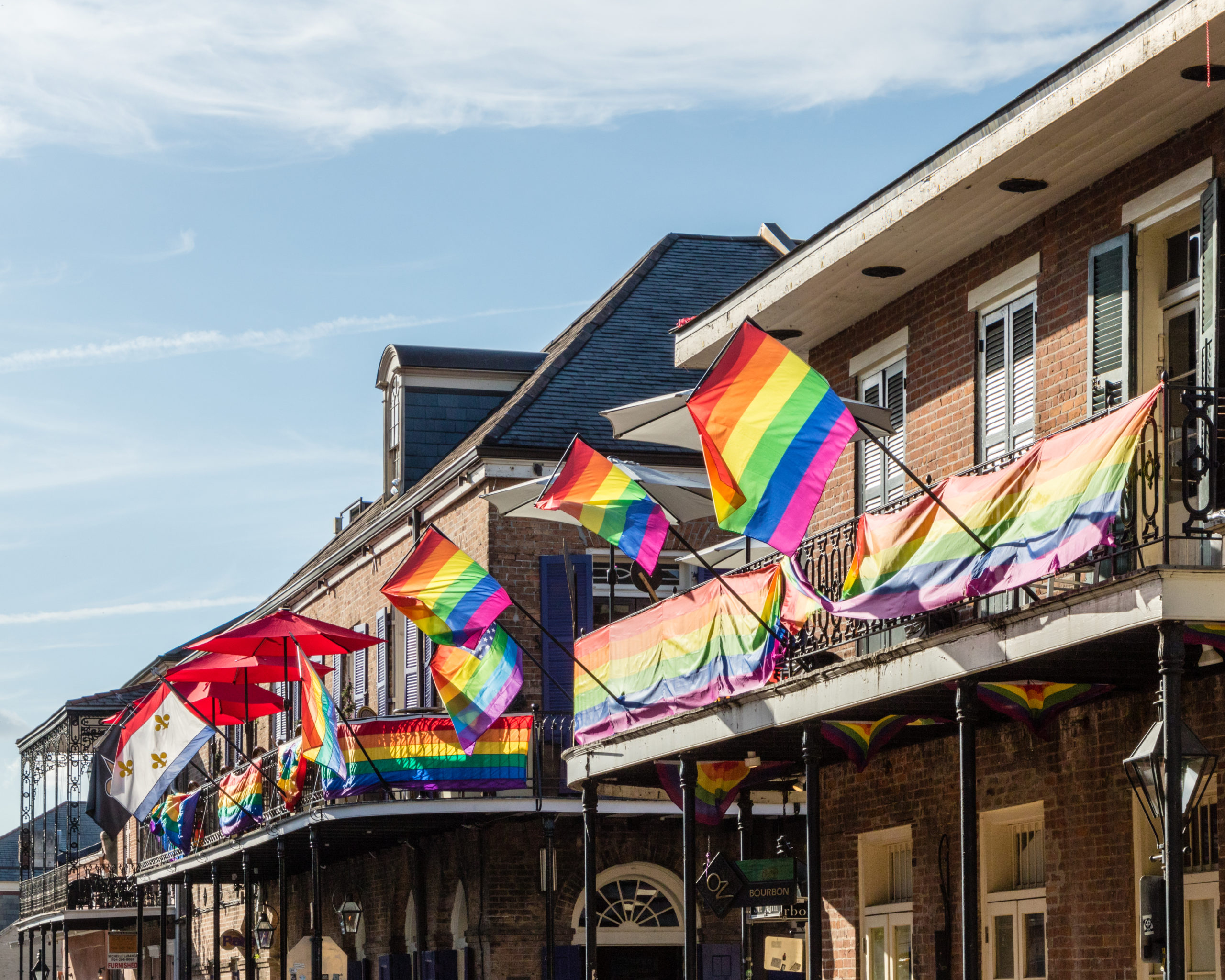 In regards to New Orleans, it has the reputation of being socially progressive within a state that is much more conservative, thus making it a regional hub for the LGBT+ population (6). 5.1% of the city’s population identifies as LGBT+, and it’s ranked within the top 10 cities having the largest LGBT+ populations. Furthermore, according to the Human Rights Campaign’s 2019 Municipal Equality Index Scorecard, which examines how inclusive laws and policies are of LGBT+ people in cities, New Orleans scores highly on its support (3). It has the total possible points in most categories with non-discrimination laws of gender and sexuality, municipality as an employer, municipal services, law enforcement, and leadership of LGBT equality; it is legally supportive of LGBT+ rights in most areas except for inclusivity in the workplace (3).

Despite the fact that New Orleans seems to have the full package with LGBT+ equality policies and laws, the transgender community within the city still experiences high levels of discrimination across numerous areas. 33% of transgender people experienced at least one type of mistreatment in public accommodations where employees perceived them as transgender. They were denied equal treatment, and were verbally and/or physically harassed at these places meant to provide services to the public (1). Furthermore, 32% experience some form of housing discrimination, 29% reported of severe mistreatment within the workplace, and 67% experienced high levels of harassment in interactions with the police and/or law enforcement officers. These acts of intolerance aren’t just happening in one facet of life, it’s permeating across crucial aspects with public life, employment, shelter, and safety.  While New Orleans has LGBT+ laws in place meant to ensure the safety and protection of this community, 58% of transgender people reported that they would feel uncomfortable asking the police for help if they needed it. This is distressing because it shows that the discrimination runs at a deeper level of unsafety. It takes on a perpetual nature because while there are laws in place, these transgender victims feel unable to request help from those meant to enforce the law and protect them; thus inherently sanctioning these harmful behaviors.

In an interview with a prominent trans-woman activist in the New Orleans community, Edge Slayer states how “the fact that I am a black woman, specifically a black trans woman, [means that] there are no safe spaces for me except for the ones I create” (7). Furthermore, a majority of the recognized “queer safe spaces” in the city are not only run by people with the main motive of profiting, but don’t extend safety beyond the physical space itself; “they say ‘queer safe space,’ but then trans women are not being walked home[, and] they’re being beaten up in a neighborhood” (7). These testimonies and statistics contrast with the presence of non-discriminatory laws and safe spaces, thus hinting at the illusion New Orleans publicizes in regards to an environment that is truly all encompassing with inclusivity.

Working towards implementing a salient solution for this issue entails admitting to the mindset of the majority; recognizing that “believing that success depends upon one’s attitude is far preferable to Americans than recognizing that their success is the outcome of the tilted scales of race, class, and gender.” (4). The New Orleans Tourism Marketing Corporation and New Orleans & Company are two companies that recognize this, and are spearheading city-wide movements for LGBT+ residents. Together, they founded The New Orleans LGBT Hospitality Alliance (NOLHA), which is composed of local LGBT community leaders and allies, hospitality workers, and community members to help foster LGBT rights (2). NOLHA’s actions are threefold: they hold face-to-face meetings to break down stereotypes and strategize as a community; they host training sessions for businesses on how to make their spaces more inclusive; and they maintain the “Everyone’s Welcome Here” sticker program. This sticker program is a simple but creative solution; local businesses within the hospitality field pledge to be an inclusive and welcoming member, and then display this sticker at their ‘storefronts’ to inform people that their spaces are safe and dedicated to supporting an inclusive environment (2).

In a city that has one of the country’s largest hospitality industries, it is crucial that the promotion and endurance of safe spaces includes this industry. The multi-level approach to recognizing and responding to these LGBT+ discrimination needs helps to promote both personal and professional support. Furthermore, it creates a wide-ripple effect; it not only encourages other businesses to create more safe spaces for LGBT+ people, but also promotes awareness and inclusive mindsets among customers. Since the start of the sticker initiative, there are 125-200 businesses registered that have this sticker (2).

However, there are some limitations with this solution. It doesn’t do anything to address safety while outside of or traveling to and from these safe spaces. The precarious relationships between the police and transgender people highlights a strong need to include them in initiatives for safety. Furthermore, how do you ensure an oath enforces inclusivity? There needs to be a way to make sure businesses aren’t just promoting their spaces as LGBT+ friendly, but are incorporating these methods into their daily business practices. While it is crucial that inclusivity is ingrained in hospitality industries, what about other industries such as health care, financial centers, housing, law enforcement, and education? Shouldn’t they also be included in pledging to create more safe spaces for transgender communities? Lastly, while it is tremendous to have two large, influential sponsors such as The New Orleans Tourism Marketing Corporation and New Orleans & Company, are they truly representative of the LGBT+ community? At the end of the day, they hold more power than NOLHA does and have both the ability and influence to make larger impacts, either positively or negatively.

The “Everyone is Welcome” sticker initiative is creative solution that is simple to apply and get businesses involved in, thus helping to address the issues of safe spaces and discrimination within public accommodations for transgender individuals. The methods of promoting interactions and exchange of information between different communities begins the work on making the existing illusions of New Orleans a reality. In order to further solidify these efforts, the inclusion of other industries and initially recognized establishments (such as law enforcement,) should be prioritized.

Jacklean “Jackie” Davis: The best homicide detective in New Orleans
Entrepreneurs and Innovators
We use cookies to ensure that we give you the best experience on our website. If you continue to use this site we will assume that you are happy with it.Ok