Holiday hot topics: Polarization isn’t about Santa anymore ; it’s about a global pandemic and the 2020 election

Editor’s Note: We’re coming back to politics for this last installment of “Holiday Hot Topics.” Polarization no longer has to do with where Santa Claus lives; it’s about the divides in our country that are augmented and exposed during election season. Here’s a look at who and what is feeding that beast. 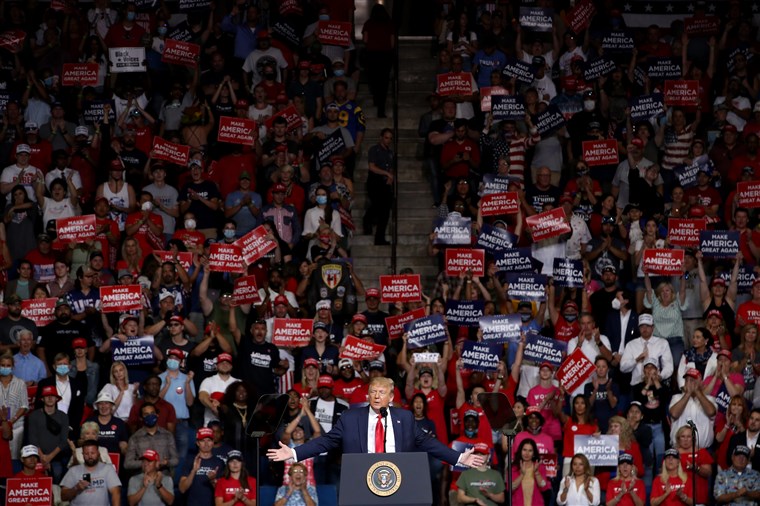 President Donald Trump at one of his campaign rallies, with few masks and no social distancing. (Photo by: Win McNamee)

For a Political Communication Election Watch Assignment,  my group tracked and discussed many issues and topics in the media surrounding the upcoming election. For four days in late October, we monitored stories that focused on three main issues: mail-in voting, the Supreme Court nomination, and the ongoing Coronavirus pandemic. Our goal was to find relevant articles from a wide range of different political communication and news outlets/sources and discuss our findings, choosing the most interesting articles and most prevalent findings to present to our class. I chose to focus on mail-in voting, and searched for articles from Saturday, October 17 to Tuesday the 20th. The two sources I monitored were Associated Press and Fox News, two very different outlets, that over the course of those days released many different articles surrounding the subject of mail in voting.

While our group initially had gathered articles about all three topics (the Supreme Court nomination, mail-in voting issues, and the pandemic), we ultimately narrowed down our findings for a more concise conversation and decided that the articles we discussed about the pandemic were the most interesting and relevant to our class. The main issues we covered in our discussion were how polarized our country has become leading up to this election and how hot button topics are the main issues being covered by the media. In our discussion, we found that the sub-topics of most pandemic articles revolved around President Trump and his campaign, involving his rallies, his mocking of Joe Biden, and a growing Trump fatigue in the country.

The first article we discussed was a piece by the New York Times, about Trump mocking Biden for listening to scientists about the Coronavirus. Science has become a huge part of this election, especially regarding COVID and disease control, and the pandemic has become The article uses some sensational language, calling Trump a “brief imitation of a grave, serious person” and describes him as “tellingly out of touch.” Overall, the article leaned left and used critical language, which our group found to be a pattern in many of the articles we discussed. While it was not extremely biased, the article is almost satirical and humorous in the way it juxtaposes Trump’s erroneous language and the actual facts surrounding the virus which, again, appeals to a democratic audience but is also a very factual article. It clearly contrasts President Trump and Biden, with Trump being displayed as a liar out of touch with reality and presenting Biden as the clear choice for president.

The second article we discussed was an opinion piece in MSNBC, titled “Trump fatigue is setting in hard at the worst moment for his campaign.” Author Hayes Brown discusses a growing fatigue in the country towards Trump and his antics, as Trump’s constant talking and presence benefitted him in 2016, but now what voters would love to hear is less. This article also had some sensational language and described the shaky support for Trump in the past weeks. His tendency to “say what he thinks” has become his biggest liability — Brown describes Trump as never one to leave “something as subtext when it could be neon.” This article in particular had less policy talk and rather offered interesting insight into Trump’s strategy as his presence and blunt talk was once his biggest proponent and now puts him in jeopardy. Members of the left have always been critical of his approach and of the “let Trump be trump energy” but now this article shows that members of the right are picking up on it as well. As I write this reflection two days before Election Night, the “weariness” in keeping up with the news that Brown describes in this article is becoming rather relatable.

My group then discussed issues surrounding Trump’s rallies in Wisconsin with a piece from CBS News.  Titled “Trump rallies in Wisconsin after state reports record-high COVID-19 cases,” the article talked about the continuation of Trump’s rallies across the country and the rhetoric Trump uses to talk about the pandemic. This article was more informative and less sensational than the previous two we discussed. It showed a clear politicization of the pandemic between the polarized political parties and how the pandemic is now a hot button issue among party politics and the election. The article had quotes from people mostly condemning Trump’s actions, as cases rose in Wisconsin and Trump did not enforce mask-wearing. Similar to the New York Times piece, this CBS article places Trump’s quotes directly beside factual information or other quotes that condemn him and present him as out of touch and in this case, endangering the public health. CBS overall frames the speech and language in opposition of Trump and his approaches, which continues with the pattern of critical language against Trump, simply with the use of facts.

The final article our group discussed was a piece in the Chicago Tribune that discussed the same Wisconsin Trump rally. This article was our group’s favorite overall and was an interesting, longer read, and we chose it because it connects to our overarching theme of articles and political communication media that criticize Trump and his negligence. Even the title, “At large Wisconsin rally, President Trump downplays pandemic as state’s coronavirus cases hit record levels” critiques of Trump’s decisions. The article presents many perspectives and is data heavy. The overall language seems to cater to the left as it directly calls out Trump’s lies and disregard for precautions. It also asserts how Trump’s rallies reinforce the divide and perpetuate the polarization between Democrats and Republicans, especially regarding the pandemic. Trump’s “meandering” speeches downplay serious threats and the virus as a whole in rallies that ignore the facts and rises in cases.

After monitoring the election coverage and discussing these articles with my group, I feel much more informed about the election and the political process. As exemplified by these four articles, and the others I found on my own, that most articles lean left when speaking about President Trump, regardless of whether or not they intend to, and simply based on the presentation of facts. The mass media pumps out so much information every day and every outlet is slightly different, but it seems that overall, most information and outlets appear left leaning because they fact check Trump. Through this project I realized the importance of framing and word choice in articles, that can change how they are received by their target audience and make them more or less interesting and contribute as a whole to the general public’s understanding of politics.