Slice and Shawarma On The Go: Paying it forward for a better future 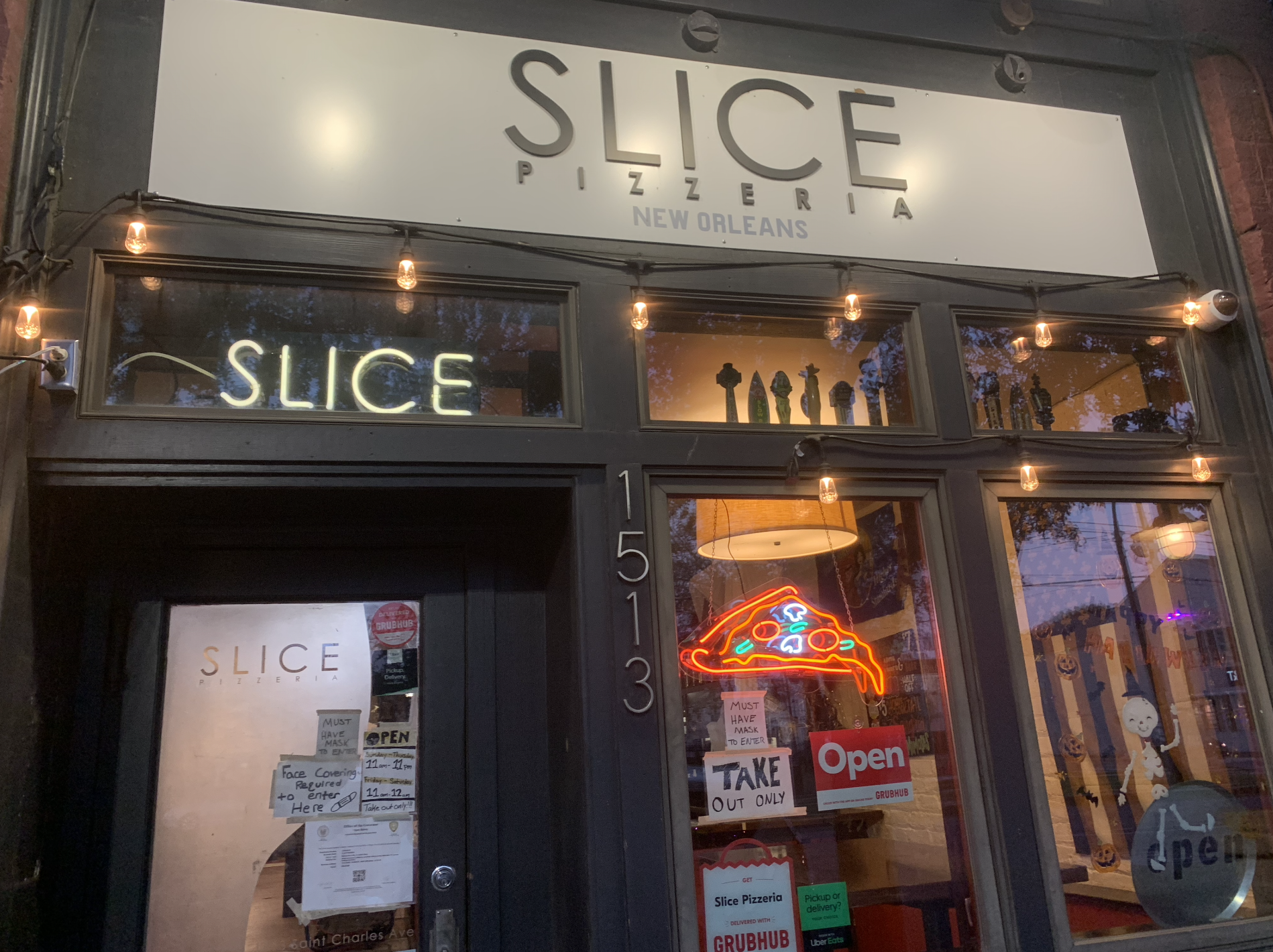 Outside of Slice Pizzeria on St Charles Avenue. (Photo by: Kendall Gaynes)

When I went to Slice Pizzeria last month, my friends and I noticed a man walk into the restaurant, take a piece of paper off of the bulletin board on the wall, hand it to the employee behind the counter, and ask for a diet coke. The employee took the paper, happily got the man his diet coke, and he left with the drink and a smile on his face. We asked the employee about the transaction we had just witnessed, and she explained that the man who came in was homeless, regularly came by, and he was able to receive a free diet coke due to what Slice calls their grassroots Pay It Forward Slice Program. This program consists of customers “paying it forward” by purchasing a meal in advance for someone who needs it that could later come in and use the receipt to receive a free meal. When asked how many restaurants in New Orleans were offering similar pay it forward services, the Slice employee replied that they were only aware of one/two other places. This raised the question — why aren’t more restaurants in New Orleans participating in programs like this?

“Everyone should do it; people are purchasing the meals for someone else and it is a nice idea to help people out so why not,” says Abbas Alsherees, owner of Shawarma On The Go (which offers a Donate A Meal Take A Meal service), in hopes to encourage more restaurants to participate.

Alsherees explains that he came to the United States from Iraq with very little and is grateful to those who helped him out when he needed it. He started his Donate A Meal Take A Meal Service as “a way to give back” and help those out who are struggling during the pandemic.

“10 dollars here and there for someone makes a big difference and nobody should go without any food,” Explains Alsherees. 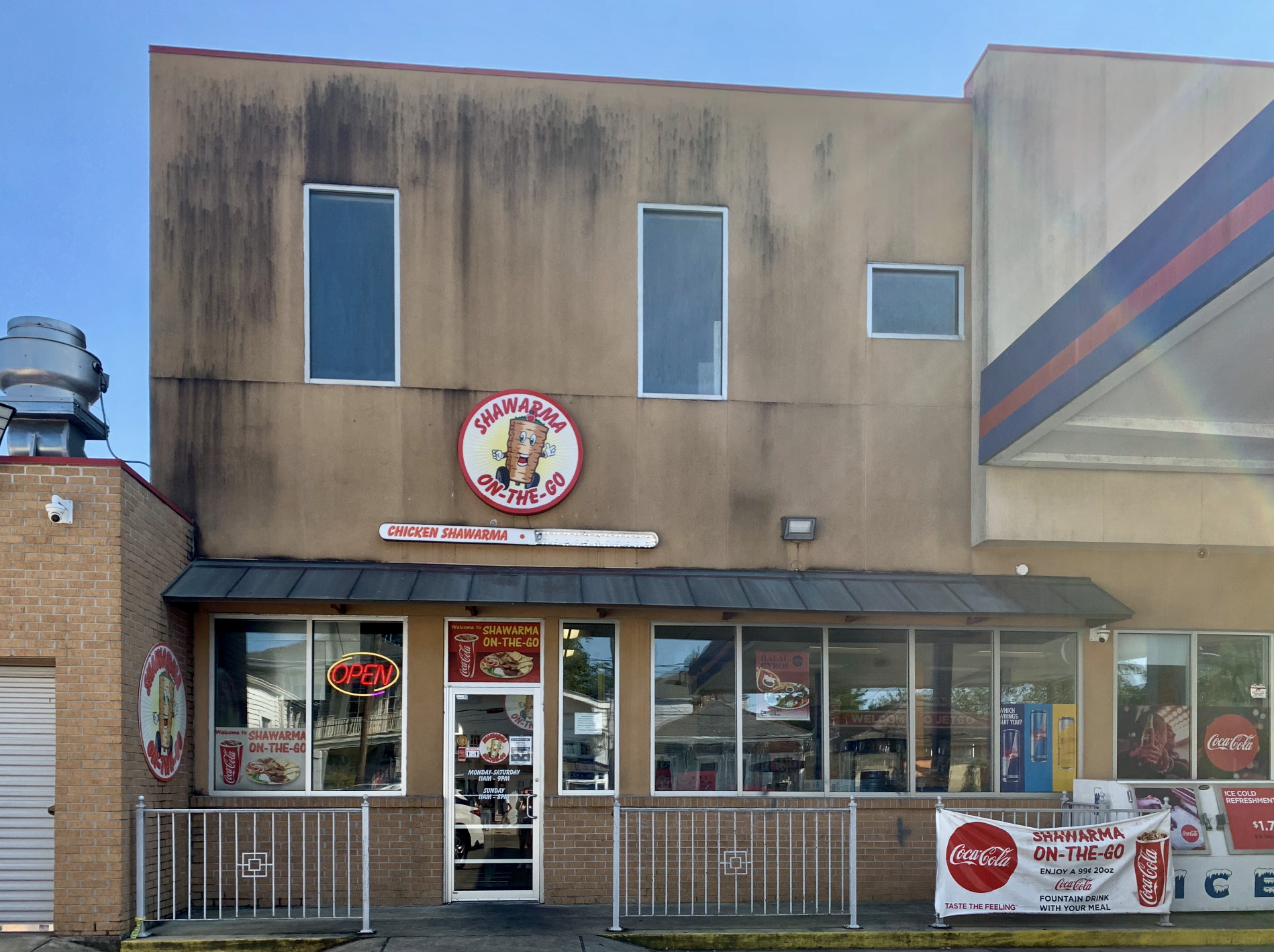 Outside of Shawarma On The Go on Magazine Street (Photo by: Kendall Gaynes)

Pay it forward programs also offer a safe and easy way for the people of New Orleans to give back to their community during these uncertain times.

“It’s all thanks to the community — I put up the idea and people started donating and supporting,” Says Alsherees.

Jim Fite, Owner of Slice Pizzeria, has had a similar experience and stated that since beginning the program a little over 2 months ago, “there have been plenty of people supporting, sponsoring, and making large donations to help out the community.” 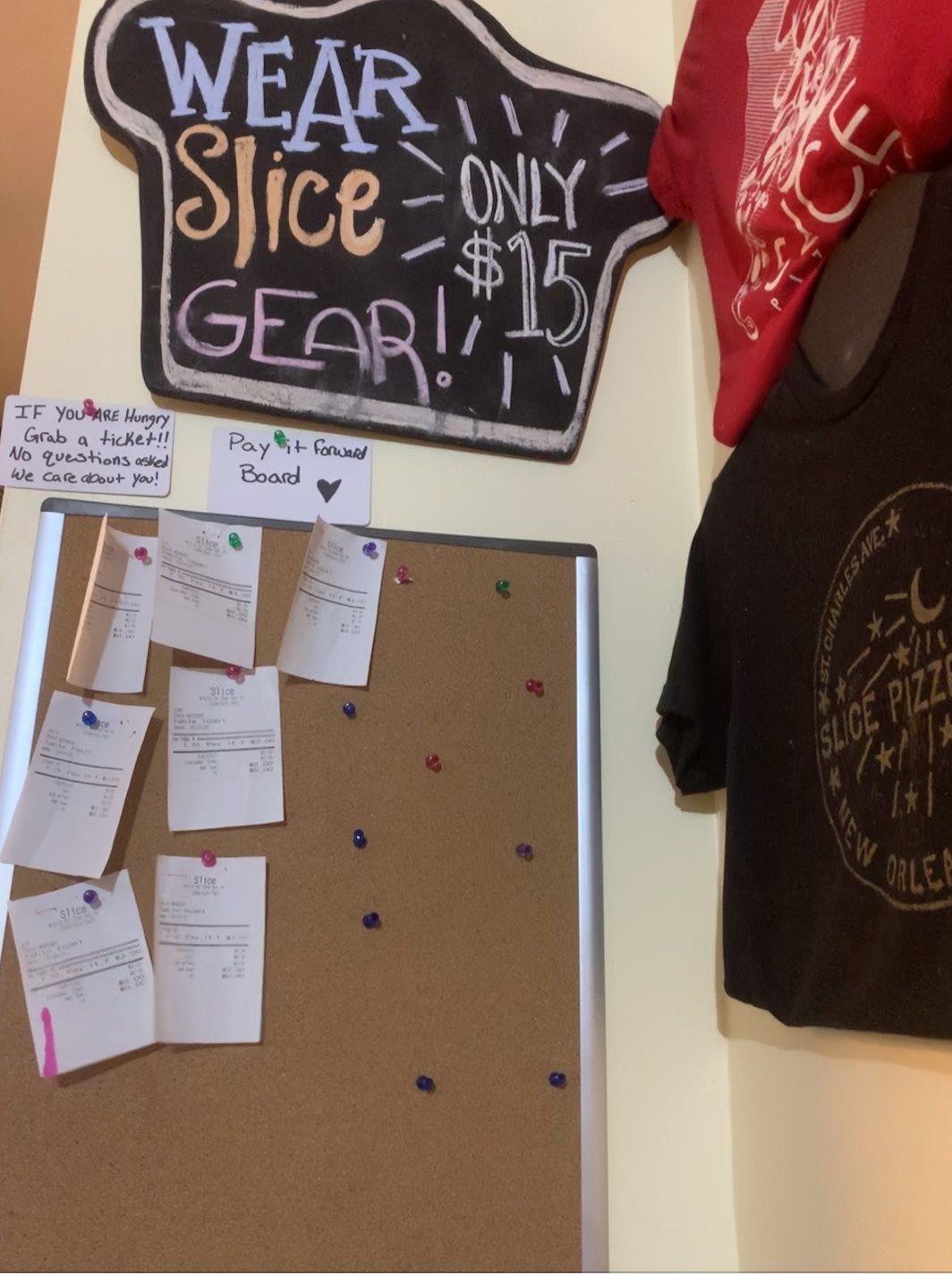 Bulletin board at Slice Pizzeria with the “pay it forward” receipts. People in need can come in and use these receipts to receive a free meal. (Photo by: Kendall Gaynes)

When asked how the program has actually helped people in need, Fite explained a memorable instance where a man received a free meal.

“He was thankful about [the meal] because he was putting his money towards rent,” says Fite.

Both Alsherees and Fite have stated that they hope to continue their efforts for as long as they can.

If pay it forward programs are really as amazing and helpful as they sound, why aren’t they well known in New Orleans?

“I have not heard about [a pay it forward program], but I think it sounds super interesting. I don’t think it’s something we have ever done, but I would love to talk to higher management about it,” says a manager from The Company Burger when asked why the restaurant had not been involved with any pay it forward services.

When asked why she believed most restaurants in New Orleans are unaware/uninvolved The Company Burger manager said, “[Paying it forward] may not be that well known and maybe providing some sort of marketing for it or advertising the concept would help to get other people on board.”

If these pay it forward programs are under-recognized in New Orleans, how can we work to make them more widespread?

When talent manager Shep Gordon noticed that American Chefs were being treated poorly by the industry, he created a new market of the “Celebrity Chef,” so that their art could be experienced and appreciated beyond the dining room of a restaurant. One of the first Celebrity Chefs who acclaims their fame to Shep is Emeril Lagasse — the owner of Emeril, Meril, and many other restaurants in both New Orleans and throughout the US. When people first saw Emeril featured on TV on Food Network and promoting his commercial spices during the advertisements, they loved that they could learn to cook with the same materials/methods as a professional chef. This sparked the beginning of Emerils infamous brand — now ranging from personalized cookware, to sauces, coffee, and more — and he has now reached a net worth of around $70 million.

Similarly to how the Celebrity Chef was created, by featuring pay it forward services on local New Orleans TV channels (or with the help from supermensch Shep Gordon), these initiatives could gain the recognition they deserve and help encourage other local restaurants to participate in these programs. Additionally — due to technological advances — these features can move beyond TV, and restaurants participating in pay it forward programs in New Orleans can be promoted via social media.

Programs where restaurants allow customers to pay for a meal in advance for someone in need will not solve all of the problems New Orleans is currently facing, but it is a safe, immediate, and easy step in the right direction to help out the community. They allow for people that are struggling from the pandemic to always have access to a warm, free meal so that they can focus their money towards their bills and rent. Shawarma On The Go and Slice Pizzeria’s efforts are a great start, but if more restaurants begin participating, imagine how many people can benefit from this. There does not seem to be a valid reason as to how these services could hurt the business of a restaurant — so why aren’t they more prevalent?

This article is part of the “Do Better” series for the Alternative Journalism class taught at Tulane University by Kelley Crawford.