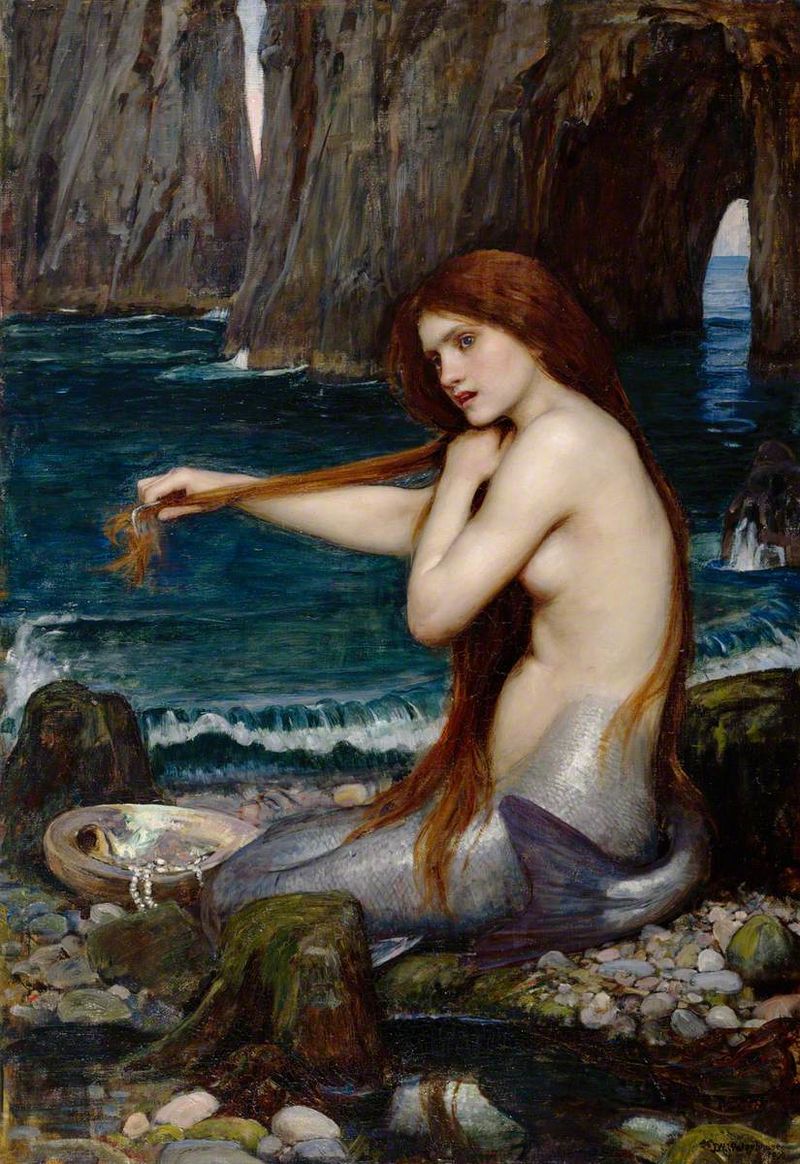 While combing through 150 years of Times-Picayune articles that mention Bayou St. John, I have learned of countless strange objects discovered in its murky “depths.” This week, I thought it would be fun to compile just a few. What do a locked safe, an unearthed coffin, a “nude stripper,” a stolen airplane, and a mermaid have in common?

In 1960, two fishermen discovered a locked safe in the bayou, and, after unsuccessfully attempting to haul it out, called the police. Last we heard of this safe, it was traveling in a “tow wagon” to the police station, at which point the police were going to attempt to find out who it belonged to. [1]

In an article from 1974, we find a comical photo of a naked man (buttocks to the camera) near the Magnolia Bridge. In front of him, thigh-deep in the water, a patient-faced, bespectacled man appears to be attempting to convince the naked man of something. Meanwhile, two police officers appear to be trying to pull the naked man from the water from behind with pieces of…string. On the bridge, onlookers crane their necks to get a better look. The caption reads: “While social worker Edward Buuens distracts a nude man who had waded into Bayou St. John, Ptn. B. B. Booth, of the New Orleans Police Dept. emergency unit prepares to pull the unidentified stripper from the cold water. The only explanation given by the man was that he was going to ‘stay in the water until I stop smoking.’” I wonder how that string tactic worked out for them…. [2]

Ok, I cheated a little bit with the unearthed coffin. It wasn’t found in the bayou so much as in someone’s front lawn who lived close to the bayou. It just had to make it into this story! In 1968, a woman called the police after spotting “a rusting metal coffin that was ornate and quite expensive” sitting on her front lawn. The police arrived and opened it, only to discover a few bits of trash and a “large funeral flower arrangement, faded and yellowed with age.” [3]

In 1975, a man claims to have spotted a mermaid in the bayou. Twice. “While many folks are preoccupied seeking something hideous like the Loch Ness Monster,” R.C. Ryan decided to put “his phantom-seeking time to better use” by searching for beautiful mermaids. If you aren’t already skeptical, consider the description of Ryan’s mermaid: “‘She was reclining languorously on the bank….She was ravishingly beautiful with her raven tresses billowing in tangled disarray and framing her peach-blossom cheeks.’” She sounds like the type of mermaid one might find in a paperback romance novel, as opposed to in the bayou, but what do I know? [4]

Lastly, in 1983, a pilot “crashed-landed a stolen, single-engine plane in Bayou St. John…leaped from the sinking craft, swam to shore, and fled in soggy clothes….” Witnesses spotted the plane “sputtering” over City Park before it veered toward the bayou where it meets the lake, clipped the crown of an oak tree, and barely missed the footbridge that once spanned the bayou near Spanish Fort before it finally crashed into the water. The plane was discovered to have been stolen from Guadalupe County Airport in Sequin, Texas, over a year earlier. [5]