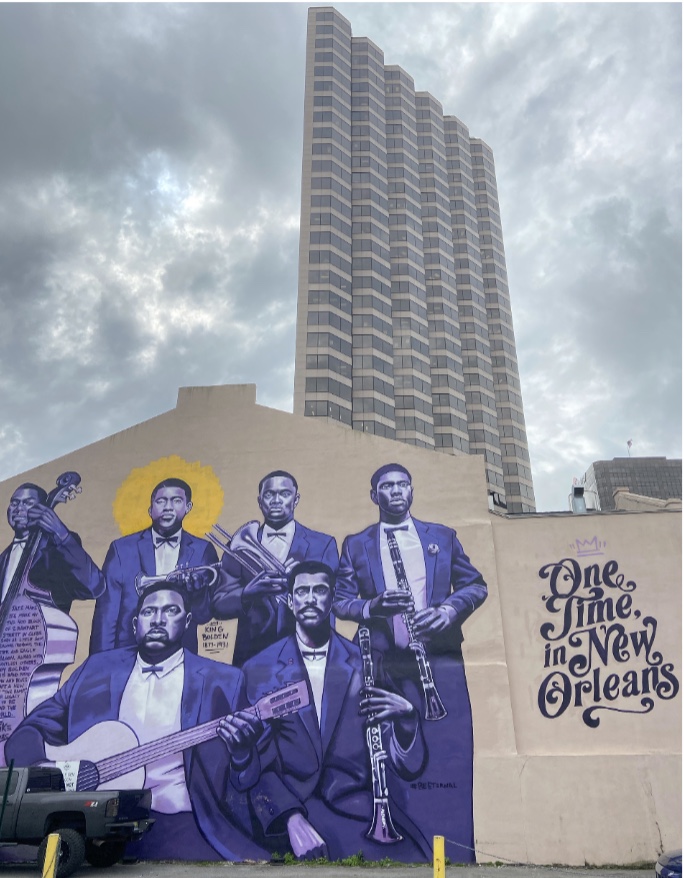 The new sites where Storyville used to reside. (Photograph by: Jeanne Chrisanthopoulos)

The 400 block of South Rampart Street in New Orleans, Louisiana, was once filled with the wind of a clarinet and the strum of a cello to accompany the women of the night of Storyville, the 1900s red-light district. Evidence of these past lives has been transformed into a modern, industrialized community filled with cars accelerating across Poydras Street, masking the sound of musical notes that once danced down the street with the procured prostitutes (4).

Storyville once radiated ‘lights of all colors . . . glittering and glaring. Music was pouring into the streets from every house.’ It was a carnival atmosphere, a sexual theme park, where men could go to join in the throng, gawk at the magnificent bordellos, enjoy innovative music, and hire a prostitute” (4). The cacophony of perpetual infectious music produced by the metal brass instruments that once dominated the 1900s district dedicated to brothels and saloons has evolved into the clanking industrialized metal automobiles overtaking the intersection of South Rampart and Poydras streets. The harsh sounds of the 2000s not only represent the current sex-trafficking that takes place in New Orleans, but also are reminiscent of the imposed cycle of sexual exploitation and overpowering of women when Storyville resided in that location.

There is a constant flow of cars and trucks swishing from all cardinal directions; the traffic density engulfs you when standing in the intersection center point of South Rampart and Poydras Street. There is only a brief moment of silence when the opposing traffic light signals overlap in red. This pause in the 21st-century vehicular version of Storyville is quickly interrupted by the honk of a car horn and the rush of traffic emblematic of the outmoded red-light district. The consistently heavy noise of traffic — vroom, skrrrrt, rat-a-tat, whoosh — is the contemporary music of the New Orleans streets. Historically, transport vehicles have been depicted as “aggressive signals” that symbolize a disturbance according to “The Diabolical Symphony of the Mechanical Age: Technology and Symbolism of Sound in European and North American Noise Abatement Campaigns” written by historian of sound studies Karin Bijsterveld (1). This perpetual noise represents the perpetual aggression on women throughout history. Storyville disturbed the human rights and wellbeing of women by “[marketing] miscegenation and prostitution by commodifying women as sex” dehumanizing them  (4). An omnipresent cycle of abuse was created in Storyville emphasized by the familial inheritance of prostitution; “a girl whose mother was a prostitute and father a former client….was preparing opium was five years old. By seven, she had started helping with her with customers; she began performing sexual acts soon after” (2). The cycle of prostitution as a perpetuated distubance of liberty is represented by the constant sequence of traffic heard by the neverending whooshing of cars.

The thunder of engines symbolizes dissonance, a lack of harmony of the jolting automobile clamour that festered a sense of dislocation, conflict, and anxiety which were feelings forced upon the working girls of Storyville (1). The thousands of commodified young women were “entrapped into a life of hopeless degradation and slavery” whose virginities were auctioned off to the patriarchy for seven hundred and seventy-five dollars (2). The individual rumbling engines represent the inability to obliviate the internal “loneliness and insecurity of their profession” (2), but the cumulative clamor is a primitive and universal “means to deafen consciousness” (1). The deafened consciousness desensitized the reality of their daily sexual labors: “they became numbed to the harsh realities of prostitution… they created a world of lies and dreams and unrealistic hopes” allowing the women to survive the arduous atmosphere (2). Viola Johnson, a Storyville prostitute, could not discern “if it was a good life or a bad life” (3) because the routine “relations with the client were mechanical and passionless on the part of the women” (2).

The noise pollution of cars has historically been associated with the lower classes and degeneration of societal order; these unwanted sounds of traffic have symbolized the disruption of specific social order (1). Storyville disrupted the segregated social order as “a marketplace for human bodies of color available to white men specifically, and available in direct opposition to the law of the day” (6). The degeneration of the law upheld by Plessy versus Ferguson within Storyville was not progressive, but it was a reinforcement of racial discrimination that derived from white slavemasters’ abuse on black female slaves (6). The distressed voices of New Orleans marginalized women pierces through the deep reberative traffic through the higher pitched squeal of tires; high pitched noises are associated with tension and heightened emotional states (5). The distressing high pitches represent the repercussions from the looming “social attitude against women [that] contributed to the misery of the prostitutes” of Storyville (2). The grumbling of cars, screech of tires, and out of sync honks of the cars and trucks of Poydras Street represent the jarring undesirable sounds that reflect a threat to social order and emotions of the women of the night (1). 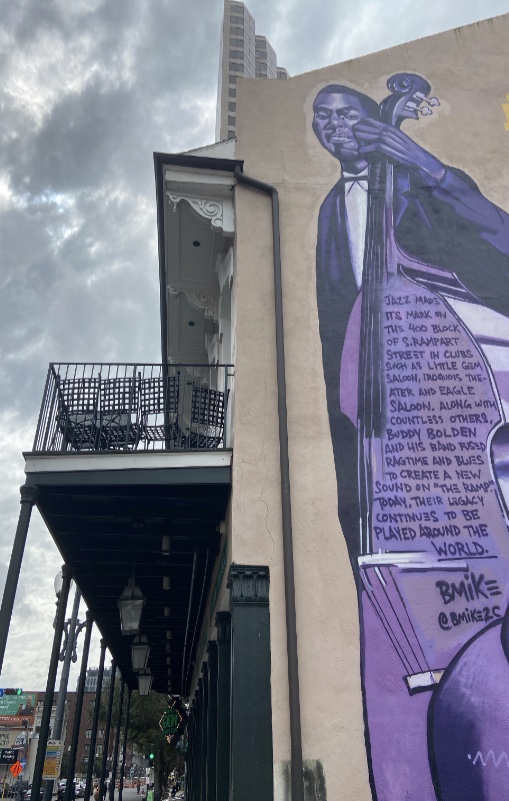 The cars, trucks, and motorcycles on the busy intersection are incontrovertibly loud. The forceful roar of traffic is noted as deep and thunderous therefore overpowering in nature (1). The power that is held by the deeper tones of traffic is representative of the outdated notion of “prostitution as an expression of patriarchal sex right” (6). The booming noises of traffic are attributed to a display of masculinity and power; this has been translated to the historically controlling dynamic of men over women (1).  The thunderous engines racing down Poydras street depict the ritualized violence and power of men over women historically rooted in slavery and continued into prostitution (1). Storyville channelled “the pseudo-nostalgic desires of white men for the sexual power of the past, retrospectively located in the prerogatives of the old planter aristocracy” (4). The sexual power of the client to the prostitute epitomizes the relationship of the master-slave dominance over women’s bodies. The loud automobiles carry the reminiscent social and sexual power dynamics through the city that was once Storyville; “Storyville trafficked in the fantasy of the slave market, the exercise of absolute power over another human being” resonating the memory of cultural subordination of women of color (4).

Similarly to the working girls of Storyville, undereducated women are currently targeted and sold across continents due to their vulnerabilities; they are then grossly violated of their human rights to be exploited (7). Red-light districts emerged to “entrap women adrift” (4), and the contemporary conditions of trafficking “resemble traditional slavery that has been modernized for the global age” (7). Although in the commencement of World War I, 1917, the taboo red-light district was outlawed and shut down to avoid fraternization with the soldiers, sexual exploitation that derived in Storyville dispersed into more discreet and unsafe ventures that have not been eliminated from society (4). The ‘ladies of doubtful virtue’ of Storyville, who performed for the convenience and pleasure of men, are remembered by the symbolic traffic sounds that haunt the streets day and night (4). The reverberating sound of automobile traffic that cuts through present-day Storyville historically symbolizes the social disorder, chaos, and sexual power men had over women which is representative of the Storyville prostitution; the homonym traffick of the analyzed sound, traffic, is connected to the sexual exploitations of women that has been consistently apparent in New Orleans since the formation of the red-light district over a century ago. 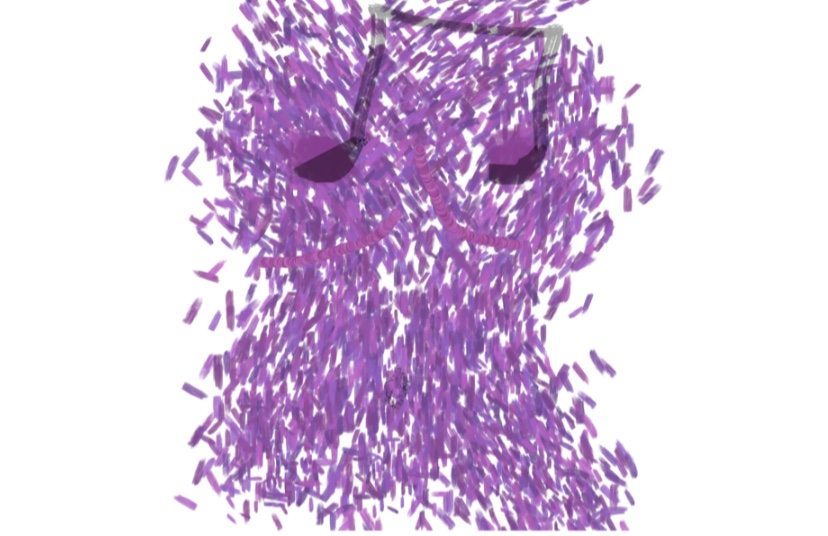 I used a digital editing software to create a woman of Storyville’s body out of a multitude of hues and layers. I drew inspiration from the purple mural on The Little Gem Saloon residing in what was Storyville; another reason I chose these hues is because purple has represented people of color in art. The silhouette is comprised of multiple layers and lines to represent the amount of men that had run over her body during an era of prostitution. Her nipples are connected by a translucent black music note to represent the flourishing culture of jazz music in the 1900s red-light district that I could not cover in this article.