On February 20th of 2019, a fire alarm sounded in the Morris-Downman House. Within minutes, the blasting sirens from seven fire trucks reverberated through the city as emergency responders rushed to the historic mansion (2). The home’s residents, Anne and Billy Grace, exited safely while camera crews, neighbors, and law enforcement gathered around the property. Flames engulfed the house quickly, and it was unable to be saved. The final hours the house stood were marked by sound. Between the crashing of the foundation to the blasts of fire hoses, the Morris-Downman House ended its reign as the House of Rex in an eruption of sound. 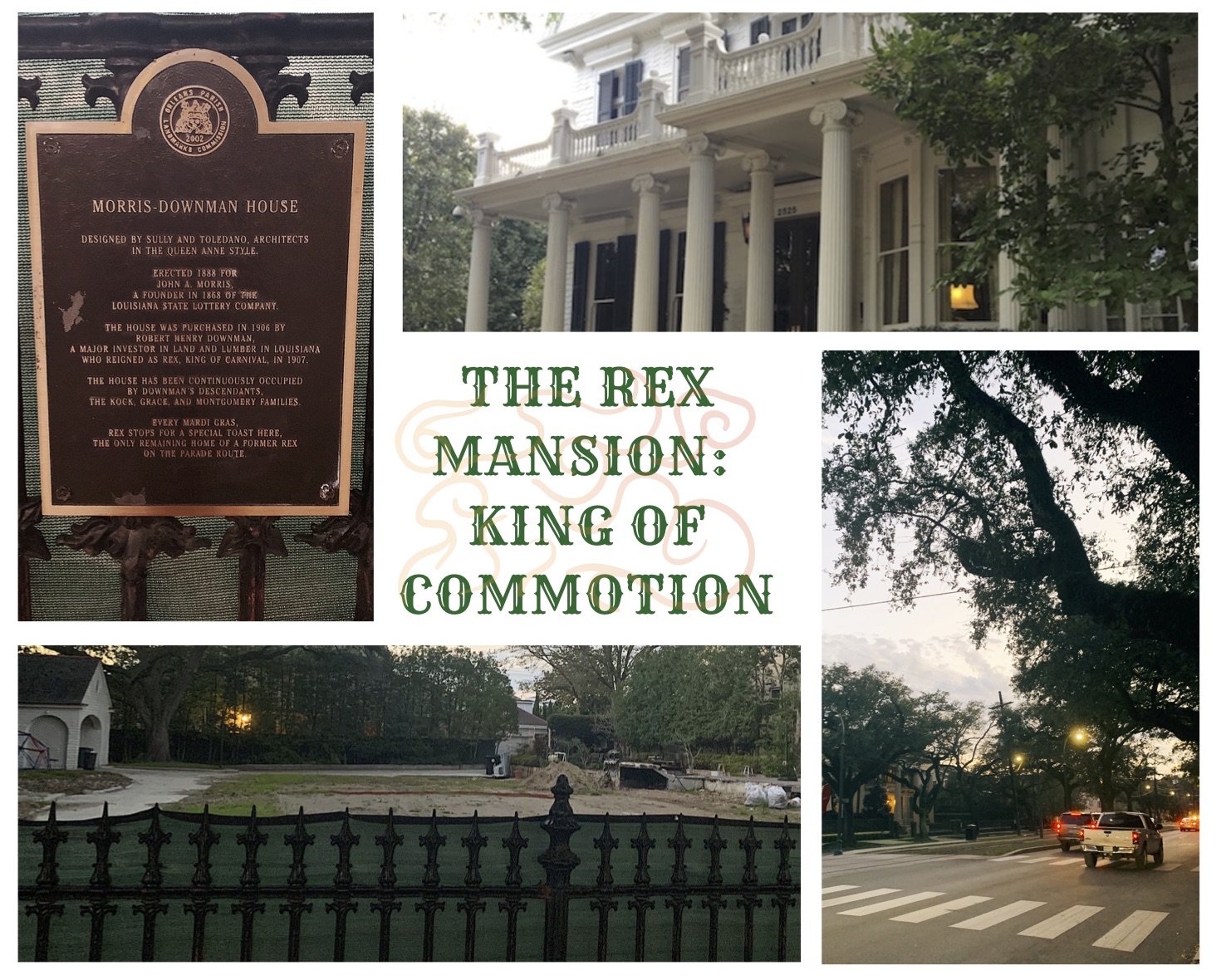 Graphic of the Rex Mansion created by Grace Dubay.

At the corner of St. Charles Avenue and Third Street rests a barren plot of land, once known as the grand and stately “Rex Mansion.” Outside the home’s imperial gate, a procession of cars steadily move along St. Charles Avenue. The continuous vibration of their engines is echoed by the sound of wind rustling the oak tree branches. The streetcar rolls by, packed with tourists and residents alike admiring the disappearing sun’s golden glow on the pavement. The unending harmony of the Garden District’s sounds reminds residents that much like the city of New Orleans, The Morris-Downman House was never silent.

Despite the building’s absence, the city’s noises clamor on around the property in unceasing repetition. Cars rhythmically pass through the street, creating a wave of sound as they roll by. The pattern of noise mimics the sound of the ocean gently crashing onto the shoreline. Throughout its reign, the Morris-Downman House was no stranger to regular floods of noise. Between holiday parties, political fundraisers, and Mardi Gras festivities hosted by the home’s residents, the home often erupted in bursts of commotion (1). Since the Morris family purchased the home in 1888, the house served as a regular meeting spot for the Rex Organization, one of the oldest and largest Mardi Gras krewes. All three sons of the Morris family served as the Rex, or “King of Mardi Gras,” solidifying the home’s connection to the Rex krewe through its very first inhabitants (3). The continued repetition of the passing cars nods to the home’s history as a staple in the annual Mardi Gras tradition. The neighborhood’s sounds are circular, repeating themselves melodically and ensuring that the street corner remains noisy.

Over the last century, the thundering music from marching bands and resounding cheers from onlookers passed by the Morris-Downman House in annual waves. The home was marked by consistent Mardi Gras celebrations, the explosive sounds of the krewes announcing themselves in a continued repetition. The habitual practice began when Charles H. Downman purchased the Queen Anne-style mansion in 1906 and served as the Rex the following year (3). At the parade, Downman stopped the procession for a toast at his home, 2525 St. Charles Avenue. A tradition was born, and the house became a defining symbol for the Krewe of Rex. The home stayed in possession of the Downman clan for the next hundred years, with its most recent resident, Billy Grace, serving as Rex in 2002 (3). In the uniform rumbling of cars driving down St. Charles, we are reminded of the home’s history as a fortress amidst a parade of noise. The consistent procession of both everyday vehicles and annual Mardi Gras krewes outside of the Morris-Downman House reveal the home’s role as a symbol of repetition. 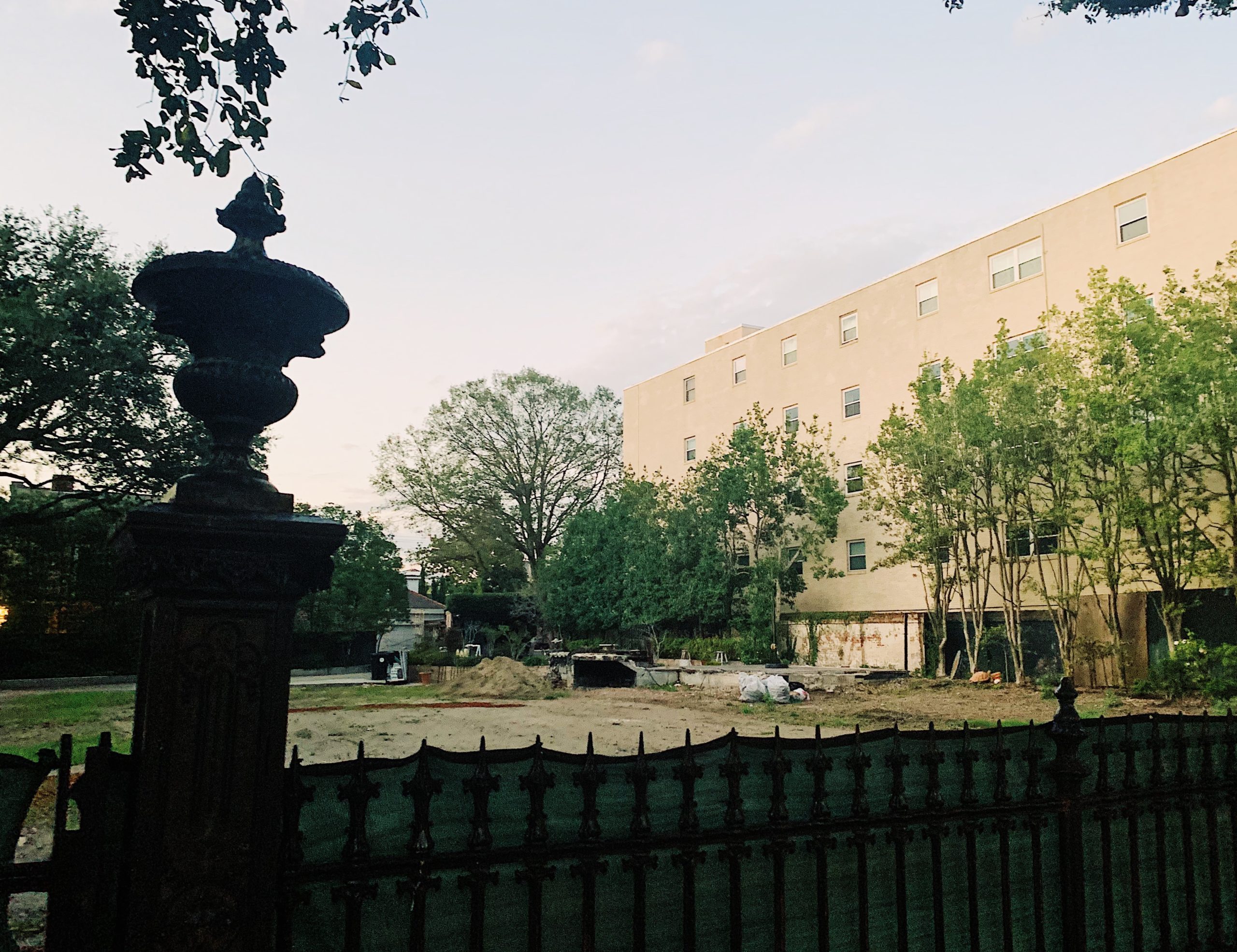 The remains of the Rex Mansion. Photo by Grace Dubay.

A lasting legacy of the Rex Mansion is its ability to bring people together. As I stood outside the house’s gate, a man approached me on a bicycle. The spinning of the spokes was audible from down the sidewalk, a signal for me to lift my head and take notice of his presence. As he rode by me, the man smiled and asked, “How’re you doing?” His voice was low and calming, giving me the sense that even though the exchange would be brief, he seemed interested in hearing my response.

“I’m good, how are you?” almost taken aback by his display of friendliness.

He rode on and soon disappeared into the distance, but the interaction left me with a feeling of gratitude.

As humans, we feel a basic instinct to communicate. When the man spoke to me, despite the conversation consisting of only eight words in total, I felt as though we had a mutual understanding of where we were. In Charles Goodwin and John Heritage’s article, “Conversation Analysis,” the authors explain that “mutual understandings are highly contingent and revisable but also that participants invoke a vast array of background understandings to make sense of a course of activity” (4). The man and I may not have shared the exact same contextual information, but we came to an agreement to interact with each other in a positive manner. This same mindset is what made the Morris-Downman House special for generations of visitors because as the fortress of the Rex Organization, the home brought together New Orleanians from a variety of backgrounds. The Krewe of Rex was founded in 1872 and tended to attract members who had been rejected from the more “elite” Comus and Momus krewes (1). The Rex Organization readily complied with the 1992 ordinance to stop discriminating based on race or sex, although it’s worth mentioning that the krewe remains predominantly white and male (5). For decades, the Morris-Downman house became a sanctuary for Rex members to gather and unite for their common interest. It’s easy to picture the extensive amount of conversations and discussions that took place within the home, especially those which connected New Orleanians from around the city.

Even after the house is gone, it proves that it is still a site capable of inspiring brief exchanges and bringing people together. The connection I made with the man on the bicycle mirrors the many bonds formed through both the Rex Organization and the Morris-Downman House. Dan Baum notes that Rex “doesn’t exist entirely in the service of privilege and exclusion. It exists, really, to put on for New Orleans — rich and poor, black and white — the greatest free show on earth” (1). As a symbol of the Rex Organization, the house continues to reflect these values. Although the conversation was limited, the home fostered a moment of connectivity through a simple exchange between strangers.

To this day, the Morris-Downman home remains a place full of flourishing harmonies of sound, roaring commotion, and charming conversations between New Orleanians. The noises that surround the Rex Mansion remind onlookers of the home’s rich history, from its years of grand affairs to its tragic demise. The sheer memory of what once stood behind the gate encourages members of the community to interact with one another, just as people did for over a century within the home. Although all that remains of the mansion is a large, desolate plot of earth, the traditions of the Morris-Downman House live on in a joyful symphony.