Hear/Here: Royalty and tranquility at the Mardi Gras Fountain 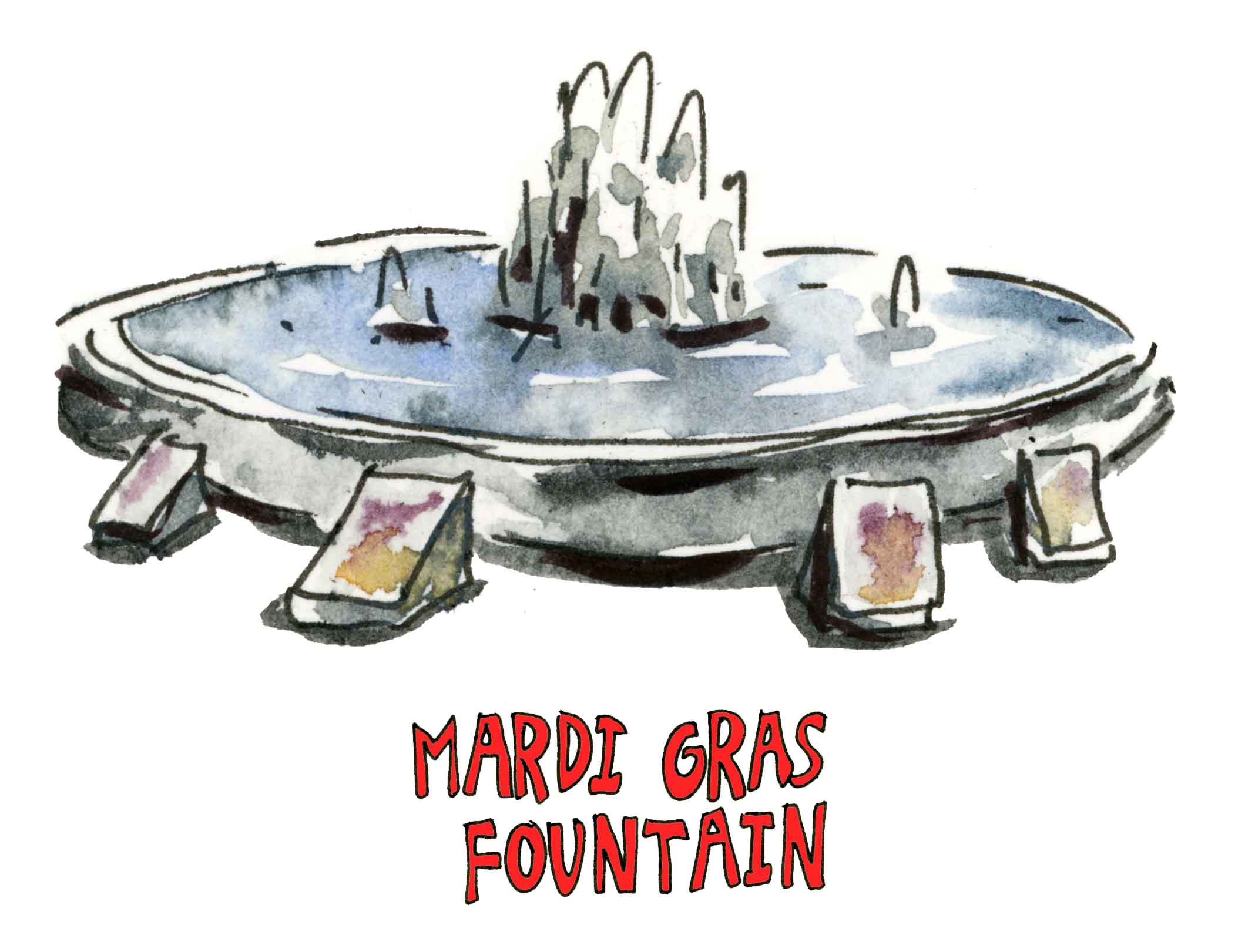 “Throw me something, Mister!” is the most heard line during New Orleans Mardi Gras parade season. Beads, high school bands, king cake, families, and friends are laughing and having a good time together. Mardi Gras is a time for celebration and fun. Far from the streets of St. Charles and Canal St., these are not the sounds I’ve heard at the home of the Mardi Gras Krewe fountain on Lakeshore Drive. This fountain is in honor of over 80+ krewes current and no longer riding that flood the streets during the infamous carnival season. The fountain is surrounded full circle by each crest and is devoted to creating a feeling of cohesiveness and grace.

The fountain is located between Pontchartrain Blvd and Marconi Blvd., and you could almost miss it driving by if you aren’t paying attention. According to Stephen Verderber’s article Five Year’s After- Three New Orleans Neighborhoods, “Prior to Katrina, Lakeview was considered among the most desirable places to live in the city…” (2). Lakeview’s mansion-style homes and accessibility to Lakeshore Drive has always made it a place of desire to reside. The Lakeview areas aesthetic of wealth and prosperity makes it the perfect place for a fountain of New Orleans royalty.

As I walk around the fountain, I can hear the wind rattling my car keys. It is not too windy or cold, but just right for warm weather in New Orleans at the beginning of the parade season. The wind gives me a feeling of freedom. As it blows through my hair, it reminds me of the way that Mardi Gras is a time to be free. Mardi Gras invokes spectators to enjoy the festivities in whichever way they see fit. Mardi Gras, being one of its most known celebrations, draws people from near and far due to its freeing aspects. In Anthony Stanonis’ journal, he quotes popular 1920s national magazine Frank Leslie’s Popular Monthly, who describes New Orleans Mardi Gras as “for no pen can adequately describe its grandeur” (5). Stanonis’ describes how, even in the 1920s, Mardi Gras has always been portrayed as an event like no other.

I then begin to hear the sound of the water coming from the fountain. The fountain nozzles spew water as the sun gleams down into the resting fountain water. I can listen to as the water drops back into the basin as more water is spurring out the nozzles. The rushing water reminds me of fountains in the castle gardens of Europe. Fountains represent elegance, development, and prosperity. The commemorations of the Mardi Gras fountain to carnival royalty can be related to the creation of fountains in Rome. Each fountain was created as a way to show the successful build of an aqueduct (1). It would have an inscription on the front to commemorate the successful builds of aqueducts. The Mardi Gras fountain is also a success commemoration of the 100+ years of royal krewe’s that roll the streets of New Orleans every year. At the front, I see a more prominent marble plaque that says, “Embellished by ROYAL CRESTS of the CARNIVAL KREWES that contribute so much to our culture.” I believe the fountain was a way to reinforce the idea of Mardi Gras krewe’s are royalty in New Orleans. To be a part of a Mardi Gras krewe in New Orleans is a boost in social status. Their status as prominent men can especially be seen in old-line krewes as an indicator of your position in New Orleans society.

The sound of the water is also fighting for dominance over the sound of the wind. When fountains were built in French gardens of the 17th century, it would be a symbol to represent the absolute single power of a king over his people, as well as man’s dominance over nature (4). I believe this can be related to the power and social hierarchies that are deeply ingrained in Mardi Gras culture. Old-line krewe’s of New Orleans viewed themselves as the law of the land, and no one had more power or control as them.

The Mardi Gras plaques around the fountain present this idea of cohesiveness. This idea is false due to the segregated history of Mardi Gras. It was not until 1994 that krewes were forced by law not to discriminate based on race, gender, class, etc. when accepting members. Furthermore, the idea of cohesiveness is also ironic due to the fountain being built in 1962. The acknowledgment that all krewe’s exhibit royalty is shown, but it does not acknowledge the 3-year struggle Dorothy Mae Taylor went through to force integration. The fountain does not recognize the racial hierarchies of early day parades. Krewe’s such as Rex and Comus would only allow blacks to be torchbearers and mule herds who would dance alongside the floats. They were never allowed on the floats because white float patrons saw them as inferior and not fit to ride on the floats (3). Because Mardi Gras is presented to the public on public streets, it was thought that krewes should be integrated to represent this. Because the fountain evokes feelings of tranquility, we forget the racism and discrimination that was ingrained in Mardi Gras at one point. The realities of life and how marginalized groups (non-elite New Orleanians, women, and people of color) were rejected membership into the old-line krewes of Rex and Comus. These krewe’s tended to have members who were politicians or in positions of power. The outcome of this would cause decisions to be made about the collective only by those individuals of certain Mardi Gras krewe members. The integration of krewes would dismantle this system, and this is what old-line krewe’s feared the most. I believe Roach describes this best when he says, “By regulating krewe memberships and ball invitations through discrete and rigorous blackballing fathers and brothers have renewed the homosocial compact annually exerting themselves to keep the dance floor safe of threats of misalliance” (3). The integration ordinance also caused some of the old line krewe’s, such as Comus, to completely stop rolling during Mardi Gras season. The fight for integration is the chaos of Mardi Gras, but the opposition is the fountain of Mardi Gras royalty. Joseph Roach, the author of Carnival and the Law in New Orleans, describes carnival politics best as “Amidst the experience of total civic participation in a collective cultural performance (plate 1), carnival “tradition” asserts and enforces historic claims of entitlement, priority, and exclusivity” (3).