COVID-19: Is it grounds to re-evaluate the Women’s Movement?

If you’re a woman, it’s not uncommon to hear the inflections of “men this” and “men that” that dominate the undertones of most conversations. Seriously, sometimes it feels like the patriarchal society we live in is a music video production for “It’s Raining Men.” We’re all expected to praise and run around singing “Hallelujah!” at the fact that men dominate the job force, economics, have fewer double-standards to live by, and countless other privileges that help them breeze by life. Oh yeah… like you see any women dancing on the streets because of that. Time and time again, men have shown they just can’t share the spotlight; they’ve even hijacked COVID-19.

In recent research, studies have shown that men are 50% more likely than women to die after receiving a COVID-19 diagnosis. This trend, which was also present with SARS and MERS, has been prevalent in countries all around the world. In NYC, the department of health reports around 71 deaths per 100,000 people for males, whereas females are at 39 deaths per 100,000 people. With these statements, it’s clear to see that COVID-19 disproportionately affects men, and the reasoning varies from biological differences (with having less X-chromosomes,) to behavioral habits (men smoke more than women leaving them with weaker lungs,) and gender disparities with hand-washing. With all these ongoing various investigations into these causes, one can’t help but wonder: what if this pandemic disproportionately affected women over men? How and would it look different? Are there any social implications? 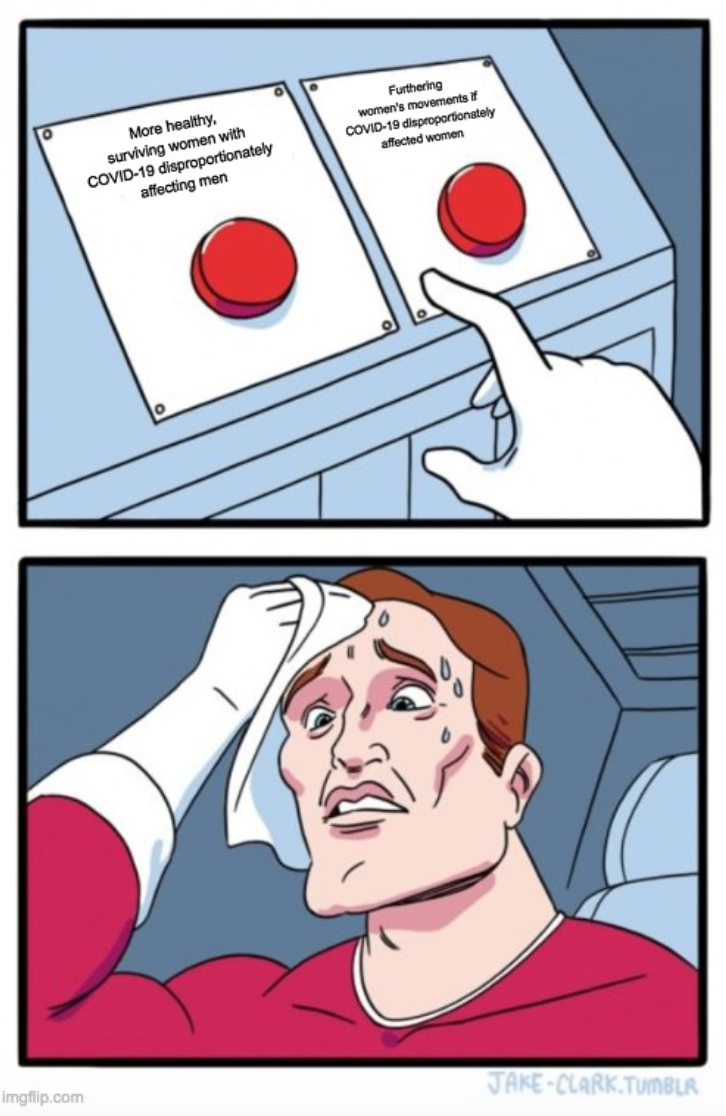 If women, who make up 49.58% of the world’s population, were suddenly the majority of the pandemic’s victims, it would more clearly illustrate and emphasize the existing inequalities women face within society. In healthcare systems, according to Hoffman and Tarzian’s research, women are more likely to be given sedatives for pain, whereas men are given pain medication. This inadequate treatment by healthcare providers is a result of subconscious biases within society that depict women as dramatizing health issues. However, healthcare providers would be forced to put aside this specific bias, given the fact that it would impact hundreds and thousands more women. In doing so, it eradicates the grounds of this implicit bias and helps women get the adequate treatment they need.

Additionally, if women were the majority of victims affected by COVID-19, I believe that society would be more emotionally freaked-out. Women still primarily fill the role of nurturers, and spend more time at home and caring for the family; this has been more accentuated since the world has been mandated to stay-at-home under lockdown orders. Many families and households, who are very dependent on women maintaining order at home, would more so feel the effect of losing them in this capacity. Furthermore, 70% of the front-line health workers are more likely to be women, especially those who are nurses and midwives. Not to mention, the majority of health facility service staff, such as cleaners and launderers, are women as well. Given these things, it would prompt society to prioritize caring for this population since it impacts health in ways not associated with the virus. If there’s a huge loss of midwives due to coronavirus, it also increases the potential deaths of pregnant women and infants.

In essence, this pandemic role reversal would prove to the world how integral women are to the systems and operations of society as a whole. In a way, women are analogous to infrastructures; you don’t realize how dependent you are on them until they’re adversely affected or gone. In forcing society to realize and reckon with this fact, it would have severe impacts on the movement towards women’s

However, on the other hand, this could also hinder the women’s’ rights movement. If the pandemic wiped out more women, it would leave less women on the planet to fight the patriarchy, which could become stronger and more reinforced without the presence of large resistance. It could also solidify stereotypes that the woman’s place is in the home, especially as the demand for a nurturing, stable, feminine presence in the home increases with lockdown mandates.

If anything, regardless if the disproportionate effect of COVID-19 on women was positive or negative, there’s no denying the integral component women have in society. Women are embedded into the operations and meaning of society, and it’s crucial to re-evaluate the implicit biases affecting this population.

Prostitution during a pandemic
Gender and Sexuality