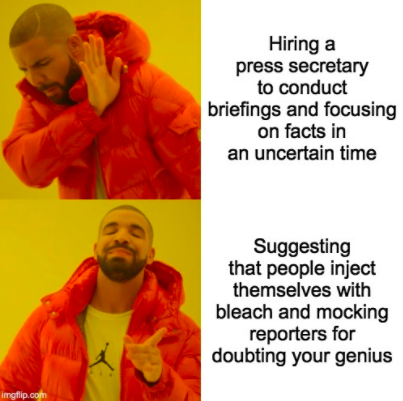 Does Drake understand the distress? (Meme by: Cameron Liquori)

It’s been widely agreed upon that, in order for our country to have any kind of return to normalcy within the next few months, testing for COVID-19 must ramp up significantly. This is a relatively non-controversial statement, widely agreed upon by many worldwide; excluding the Trump administration, of course, which continues to display brazen confidence about the amount of testing underway in our nation. As of April 26, the U.S. has conducted over 5 million coronavirus tests. This figure is deceptively large; as the US population is roughly 329 million. This means that less than 2% of all citizens have been tested for COVID-19.

Individuals are becoming increasingly desperate for stay-at-home orders to be lifted. Protests across a number of states have become increasingly rampant. I’m unsure how these individuals expect to protest a virus. Do they think that the virus will hear them protesting and decide to stop infecting people? Nevertheless, I digress. As the country is showing a desperation to be free of social distancing constraints, top experts continue to assert that the only way that this will happen is if testing becomes exponentially more readily available and widespread. However, our own president’s refusal to acknowledge the testing shortage facing our country makes his own hubris one of the biggest barriers between our current state of affairs and normal life.

The blame for the shortage of tests doesn’t necessarily originate entirely from some sort of incompetence of our federal government. Some of the largest roadblocks cited by New York Governor Andrew Cuomo, whose state has been hit the hardest by this virus, have been the lack of uniformity in the tests, as well as a shortage of reagent chemicals necessary to run diagnostics on the tests. In a desperate bid to produce as many tests as possible, many of them were developed in the private sector, meaning that they lack a uniform regulation of production nationwide.

Additionally, most tests require a long list of difficult-to-pronounce components: throwaway polystyrene parts, chemical reagents, glass pipettes, pipette tips and more — all made by different manufacturers. This results in a “complex supply chain that easily breaks down when there is a shortage of any particular element.” The world has not faced a pandemic of this degree in over one hundred years. Though it’s unfortunate that labs and health experts have been left scrambling to procure the resources to expand testing, the speed with which this virus engulfed the world didn’t allow anybody the space to prepare.

Seeing as there are a plethora of reputable sources confirming testing and supply shortages, you’d think stating that the US isn’t testing enough people would be a relatively uncontroversial claim, and that our current presidential administration would be dedicated to helping the country get back on its feet. However, the President of the United States has made countless brash assertions that are in direct opposition with reports from educated professionals.

On the same day that Gov. Andrew Cuomo reiterated his call for federal assistance in the effort to ramp up testing, Trump boasted in one of his increasingly erratic press conferences that the US had “the most expansive testing system anywhere in the world.” He makes a number of claims like this, oftentimes in direct opposition with medical professionals worldwide, and offers few reputable sources to back up these claims. Though we may have tested the highest number of individuals out of any country, it’s important to note that this is different from testing the highest percentage of individuals. In that respect, the United States ranks ninth.

Trump’s claims have gotten increasingly wild as time has progressed. A few days ago, while live on air at another one of his daily press briefings, he offered his own solution to COVID, saying that he was impressed with how quickly disinfectants like bleach could kill the virus, and asking the public to consider injecting themselves with bleach to clean out their lungs. After facing immense public backlash from doctors, lawmakers, and even the makers of Lysol, Trump snidely told a reporter a few days later that he “was asking a question sarcastically to reporters like you just to see what would happen,” despite there being zero evidence of facetiousness in his initial claim.

Though it is certain that the United States is in dire need of an increase in testing, the President has never been more out-of-touch with both field experts and the needs of the American people. The lack of available testing cannot be blamed on Trump, but the country will continue to suffer as a result of his ignorance. So long as he treats scientific fact as hostile to his own touted beliefs, the public will continue to be divided, and the United States will continue to lag behind the world in treatment of coronavirus.

Coping with Corona: Myth busters and the current truth
Health