Bacchanal: How New Orleanians fight for the wild ones

Editor’s Note: The following series “Together in Isolation” is a week-long series curated by Rosalind Kidwell as part of the Digital Research Internship Program in partnership with ViaNolaVie. The DRI Program is a Newcomb Insitute technology initiative for undergraduate students combining technology skillsets, feminist leadership, and the digital humanities.

As New Orleans comes together by staying home during this time, we look back on a time when we stood together for our love of live music and good food. This article was originally published on September 8, 2017. Now that it has been written up in Bon Appetit and tourist groups have made Bywater a staple stop on their New Orleans expeditions, Bacchanal no longer has a secrecy lingering around its existence. This wine, cheese, food, and music venue continues to provide its expansive outdoor area that is shaded with trees, soft lighting, Tiki-torches, and eclectic nooks and crannies. But, what people don’t know is the history that falls behind Bacchanal’s current life.

To delve into that history, we sat down with Beau Ross, the co-owner and man in charge of media, music, and marketing for Bacchanal, and here is the story.

It all started when owner Chris Rudge, who passed away in 2015,  first opened Bacchanal in 2002. When Katrina hit Bacchanal with strong force, all the retail that made it a quirky little wine bar was flooded and ruined. Instead of letting this hurt the venue, Rudge and others were able to create something amazing called “Bacchanal Sundays.” On these Sundays Bacchanal “hosted” other chefs that were unemployed due to storm related restaurant closures. These chefs were able to cook using Bacchanal’s tools and venue, restoring hope not only for the restaurants and chefs involved, but also the residents of the Bywater.

Pete Vasquez was a key player in Bacchanal Sundays. Vasquez, of the restaurant Marisol, ignited the event when he set up a mobile kitchen behind Bacchanal. Soon other chefs joined in the rotation, creating an exciting food/wine/music venue. This was one of the decisions made by the owners that really put Bacchanal on the map as one of the go-to places in New Orleans (1). Bacchanal Sundays helped the owners realize the true vision of what the restaurant could be. 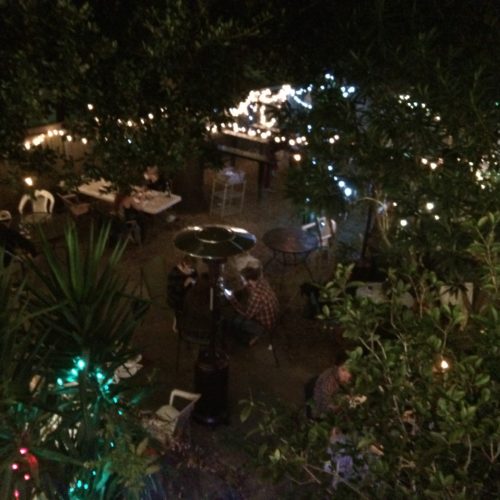 The outdoor patio from above (photos by Katy Chappellie) 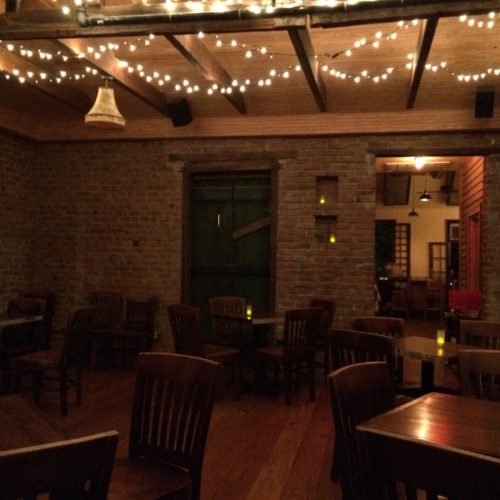 The warm and glowing interior (photos by Katy Chappellie)

Knowing that music had to play an integral part, they set to choosing a genre. They chose jazz. Ross professed that “jazz fits wine,” and that he loves jazz, so it was first on the table. But, the humble beginnings of Bacchanal also shaped why Jazz is the main theme of the venue. When Bacchanal was first establishing itself in the community of the Bywater, the owners had to rely on the people and the culture of New Orleans to define its personality as a venue. Ross referred to this as an “organic evolution.”

Since Bacchanal was a seven day a week live music venue from the start, their search was for musicians who were happy for their music to simply reach people and were willing to play at the pay-scale that the young Bacchanal could provide. Luckily at the time New Orleans had “an amazing pool of talent,” Ross explains, “who were eager to get original music out there.” Almost all of these musicians fell into the hard bop, or straight-ahead jazz genre, which is what Bacchanal mainly caters to today, with some gypsy and traditional jazz thrown in as well. But, while Bacchanal Sundays created the vision of music seven days a week and a full time chef, Bacchanal still didn’t have a food or music license during that time. As Bacchanal grew in popularity, this fact became more and more daunting as running a bootleg venue became riskier.

One Friday night Bacchanal was raided by the police, and food and music operations were shut down for a time. After an abundance of legal harassment, Bacchanal was called to city hall to go on trial for licensing issues. Bacchanal seemed destined to fail, as Bacchanal’s paperwork pleading to remain a working venue were stamped “deny with prejudice” by City Hall workers.

That’s when the true personality of Bacchanal came shining through. In a display of community that City Hall Judges had never seen before, thirty or so community members woke up on a Monday morning, took to a microphone, and pleaded for Bacchanal’s sake. They told touching stories and explained how much Bacchanal brings to the community.

By the end of the locals’ testaments, the board in charge of Bacchanal’s fate was emotionally overwhelmed and made the realization that Bacchanal needed to stay. When speaking of how Bacchanal won that day, co-owner Beau Ross spoke of City Hall and said, “I don’t think we beat them, they just joined us in victory.”

When we look back to the Greeks, the definition of bacchanal is “an occasion of wild and drunken revelry,” and some older stories of Bacchanal live up to its name. In addition to the mud wrestling they were known to have entertained, one of the more bizarre (and dangerous) amusements was Roman candle wars. On numerous occasions Bacchanal would sponsor these wars in which people would go out and line the streets while two opponents would shoot each other with Roman candles. While Ross admits that this was crazy, stupid, dangerous, and could have shut down Bacchanal forever, he believes that the memory of these wars, “captures the anarchic spirit of the place and how it evolved.”

This piece has been edited for content, and the original was published on November 19, 2014 on MediaNola.

Inside the truck with Fat Falafel and 1000 Figs creators
Interviews