Peaches Banner having over the old Woolworth luncheonette (Photo by: Hope Abbott).

Upon observing for several minutes the atmosphere put forth by Peaches Records located at 4318 Magazine Street, the chatter, laughter, and mechanical noises of the store began to fade out, and I started to hone in on what had been carrying on all along in the background: music.

As I stood there amongst thousands of records and relics indicative of the deep musical culture present in this space, the lyrics, message, and historical implications of “Tremé Song,” which played on Peaches’s speakers, flooded me with a new understanding of how the foundational African roots of New Orleans have survived the Louisiana Purchase, antebellum slavery, and Hurricane Katrina to maintain this city’s status as the greatest influencer and epicenter of modern music. By investigating the nature of the call-and-response structure employed by John Boutté and analyzing his use of New Orleans specific lyrics in “Tremé Song,” the innate need for communication between humans and the role of geography in creating identity reveal themselves as two phenomena linked through the concept of participation. Specifically, interpreting “Tremé Song” as a means of connection between people and place unveils the story of New Orleans as a breeding ground for the African culture that has influenced all modern music and exposes the vital role of Peaches as a site meant for upholding this transactional relationship between the city and its music.

This song, though not one that I had heard before, felt familiar to me in that I instantly recognized the call-and-response structure with which it was composed. Modern use of call-and-response functions much like a conversation; in “Tremé Song” it begins when Boutté sings the beginning of each line in the following chorus and his female counterpart finishes it:

“Down in the Tremé

Is me and my baby

This back and forth, interactional flow between two musicians (or their instruments) is a communication technique that harkens back to eighteenth- and nineteenth-century plantation life, when call-and-response came to the Americas from Africa as a way to “punctuate the day’s work” with a rhythm–permitted by landowners because it encouraged consistency in their labor–that allowed for the preservation of spiritual and communal practices amongst the enslaved fieldworkers (1). Ilmar Tammelo’s assertion that, above all else, “man is a communicating being,” holds water here — call-and-response has stood the test of time and transcontinental travel because it is the most fundamentally humanistic manner with which music can be composed (3).

“Tremé Song” was broadcast on the speakers like a message to the public, inviting everyone to wade further into the store and submerge themselves in the wealth of musical variety that it offers. The uplifting tempo and jumpy Bamboula rhythm felt like an homage to the high-energy hustle of the very busy Woolworth diner that once occupied this space, but also allude to the immeasurable amounts of time and energy that the owner since 1975, Shirani Rea, has been putting forth to keep the spirit of vintage music and her store’s history alive, such as how she has devoted almost entirely one half of her store to the sale of used records rather than to new ones or remakes (see photo below). 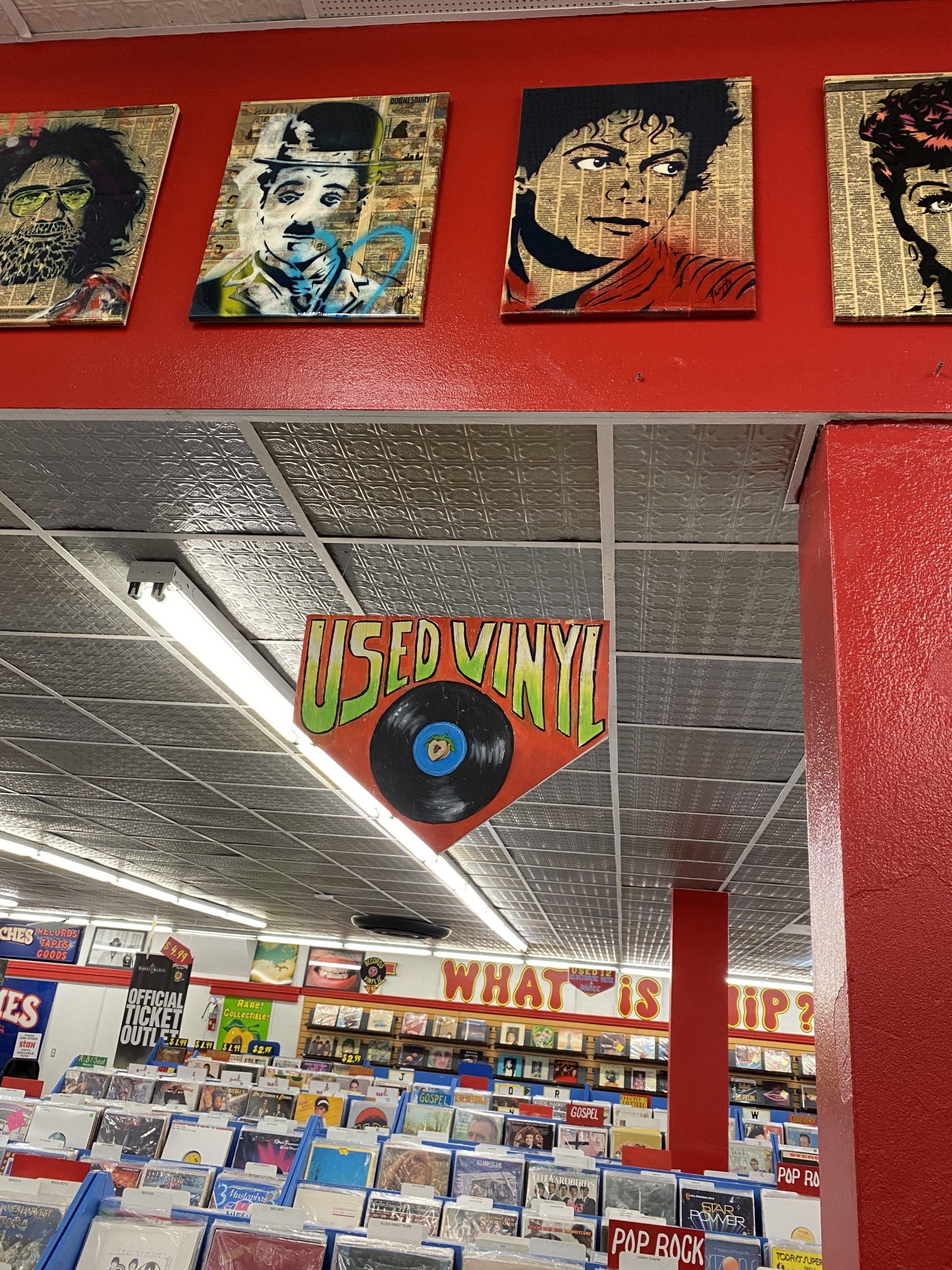 Used vinyl available for purchase in the Peaches. (Photo by: Hope Abbott)

This is also an example of how Peaches itself engages in a call-and-response dialog with the surrounding community by responding to the needs of the people in New Orleans through both music and other philanthropic effort: Rea’s emphasis on resale, combined with the fact that the Peaches building was also repurposed from its old use as a diner and convenience store, is a response to the Green Project, this city’s call to action for healthier environmental choices, including greater incorporation of renewal and recycling throughout daily life. Rea employs local artists, hosts album release parties and weekly concerts (news of which are posted on the Peaches Records official Instagram account, @peachesrecords), and even put on a #HastagLunchbag event that provided meals to the city’s homeless population, all in response to requests made by the people of New Orleans. She has also maintained this African-rooted participation of New Orleanians within their city by asking for their help in fundraising to preserve the old diner counter, a noted change from her tendency to be on the other end of the call-and-response spectrum, to provide the help, not ask for it.

The explicit mention of the Tremé neighborhood as the main premise of this song arms it with rich importance; that Tremé houses the centuries-old Congo Square where the first recorded drum circles performed by enslaved Africans took place every Sunday provides insight into the creation of a New Orleans music founded in these African participatory rituals that has since spread to a vast array of musical genres (4). As Catherine Nash explored through the study of Irish identity, ‘who we are’ is heavily associated with ‘where we come from’ (2), and Tremé as a generator of African-influenced, New Orleans music still applies today–Louis Armstrong would sneak into jazz clubs in this neighborhood as a young teen, actively taking advantage of what this city’s music scene had to offer. Elsewhere, in the neighborhood of Hollygrove, world-renowned rapper Lil Wayne cites the corner of Apple and Eagle Streets in the lyrics of his song “Triggaman” as the place that shaped him during his early childhood. Peaches disseminates the music of both of these artists, making sure that the place-making that they have done in New Orleans is continually available for future generations to glean from, just like the African-based foundations for jazz, rhythm, and blues, and hip-hop were for them. The record shop also contributes to this by providing New Orleans with a 15,000 square foot space where people can interact with and participate in their surrounding community much like Boutté prescribes in his lyrics:

“Hangin’ in the Tremé

in front of my door.”

These lines lend visions of friendly neighbors and family members dancing along the streets and allude to the participatory nature of the aforementioned drum circles. They also point to the communal background with which music is composed and shared, to which Shirani Rea had her greatest contribution by playing a fundamental role in the creation of Cash Money Records, a label that has provided a platform for countless artists, including internationally famous rappers such as Drake and Nicki Minaj.

Peaches playing a ‘new-to-seem-old’ song (“Tremé Song” was written in 2003 but stylistically mocks songs from 50 years prior) suggests that this place–this building and all that it has been–is a landmark for that which made New Orleans a completely unparalleled city in terms of the creativity, history, and preservation of music: a New Orleans-specific, African-influenced, Black jazz culture that counteracted the silence cast upon it by creating noise that brought its people together, thereby creating a community that suddenly everyone wanted to be a part of because its toe-tapping, hip-swinging nature made them feel human. The Bamboula rhythm of the piano, the backbeat of the bass drum, the inclusion of a call and a response, or the use of socially relevant/place-making lyrics, which are all present traits in “Tremé Song” are standard practice for music of all different genres, from all different places, created by all different people. They are an indication of the widespread and time-testing influence that music has had on New Orleans’ identity and the work that Peaches has done to maintain it. As Peaches plays Boutté’s song, it gives strength to the city’s musical roots and speaks to just how supportive the shop is of local artists, current and past. 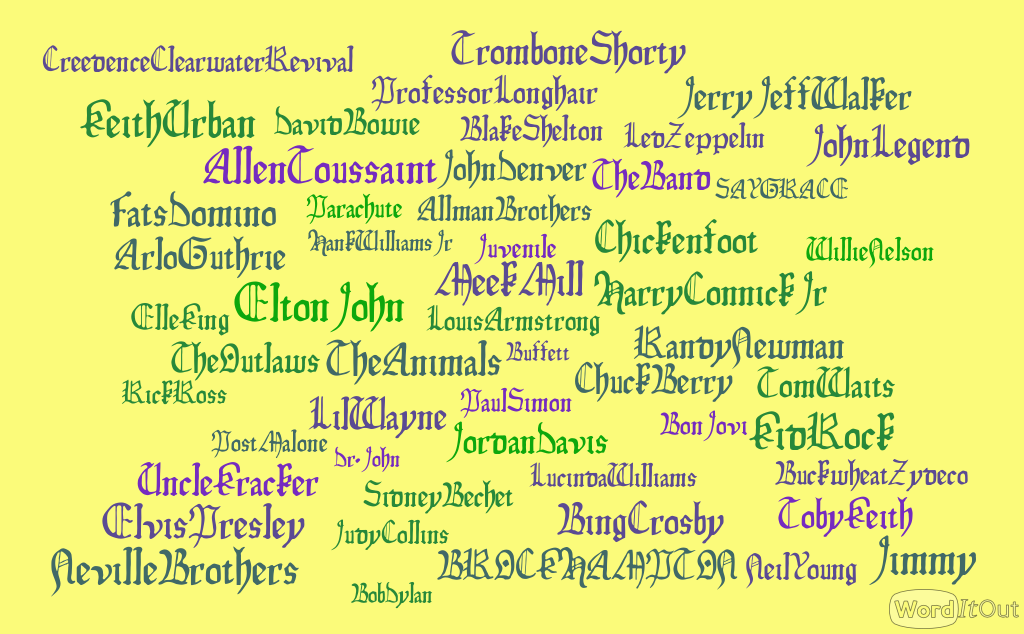 This word cloud is representative of the vast influences of New Orleans’ African roots in modern music; all of these artists from across all different genres have mentioned “New Orleans” in their lyrics. The colors are Mardi Gras colors. (Created by: Hope Abbott)

This article was completed for the class Alternative Journalism, which is taught at Tulane University by Kelley Crawford.