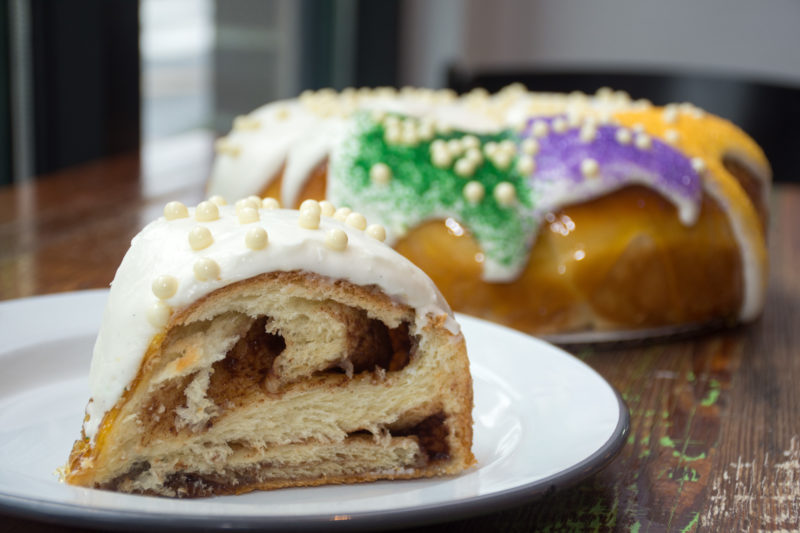 King cake as it ought to be: The “caramel crunch” king cake from Willa Jean (credit Scott Gold)

Gather round, my children, and let the gnarled old sage tell you of a time long ago in New Orleans, in that paleolithic era known as “the early 1980’s.” It was a simple time, back when Emeril had a last name and was known only as a local restaurant chef, when Maison Blanche still operated out of a storefront on Canal Street, and the idea of the Saints ever making it to the Super Bowl was considered a fantasy as far fetched and unlikely as the development of cold fusion or interstellar travel. Also, people who took pictures of their food at this time were considered to be “touched in the head.” Oh, how the world has changed, my young friends.

Back then in New Orleans, too, even king cake was different. It was a simple carnival treat, and not the platform for unabashed decadence and excess it has become today. I remember Fridays during Carnival in grade school, when a member of the class would treat us all to a king cake. As far as I knew, all king cakes were identical back in the days of stone tools, rotary telephones and monochromatic computer monitors. They were massive circular loaves of dense, doughy, vaguely cinnamon-inflected bread topped with granular sugar colored purple, green and gold. It was important, I recall, that the sugar contained grains approximately the size and density of walnuts, and would send you screaming to the emergency dentist with an exploded incisor if you chomped too greedily. And, as what constituted either an added bonus or a cruel joke, the cakes were adorned with four or five strategically placed cherries, which had been fashioned out of low-grade plastic and marinated for several decades in formaldehyde.

For many years, this is what “king cake” meant to me as a child, and as you can imagine, I wasn’t much of a fan. Why gnaw on what seemed to be six baguettes worth of bread when you can have doberge cake or buttermilk drops? It was, to my mind, the red-headed stepchild of New Orleans baked goods. Then, one glorious day, I tasted a cream cheese stuffed Haydel’s king cake, and my entire king cake worldview encountered an intense paradigm shift.

Since that time, king cakes have been getting steadily more elaborate and creative, with bakers insisting each Carnival season on a kind of good natured one-upsmanship that, for the most part, has resulted in king cakes with ingenious new flavor combinations, frostings and fillings. (This is consistent, of course, with the New Orleans bushido of excess.) On this score, we’ve been treated to everything from chocolate cream-cheese stuff king cakes to cannoli king cakes, chantilly and fresh berry king cakes, and even a modern take on the classic from bakers like Kelly Fields at Willa Jean, pictured above: a perfect cinnamon-swirled, unfilled brioche cake topped with a caramel glaze, cream cheese frosting and crunchy white chocolate pearls. It’s safe to say that those making king cakes today are looking at their forebears in the 80’s and earlier like a teen on an iPhone looking in condescension and confusion at an Apple IIe.

But somewhere in the new millennium, not only did the craft of king cake evolve for the better, the evolutionary process resulted in what anthropologists know as “speciation.” Basically, the tree forked, and a new type of king cake appeared alongside its elegant, artful brethren. I can’t place it exactly in the evolutionary timeline, but I think it all started with the “boudin king cake.” I thought it was a novel idea at the time, but clearly, the floodgates had opened, and all bets were off. Suddenly we had crawfish king cake, king cake monkey bread, king cake doughnuts, king cake bread pudding, popcorn, macarons, cake pops, soda, even – God help us all – king cake-flavored beer.

As a proud son of the Crescent City, I hate to admit it, but it must be said: “King Cake flavor” is the new pumpkin spice.

And with that realization, all bets were off. Anything that might have been sacred about our local Carnival treat had been summarily murdered for the sake of novelty, then doused in purple, green and gold sugar and heaped on top of a cheeseburger. Oh yeah, the king cake cheeseburger is also now a reality. As are king cake French fries, pizza king cake, king cake muffaletta, and the fried chicken king cake sandwich, which is precisely what you think it is: a whole breast of seasoned, deep fried chicken between two slices of king cake. Because some people really do just want to watch the world burn.

In our current state of affairs, I believe that we have reached the edge of a king cake event horizon, and if we’re not deadly careful with our navigation, we’re bound to wind up in a king cake black hole. And you know what happens to things that go into a black hole? Spaghettification. We will all become king cake-flavored spaghetti, which I do not yet think exists, but after just writing it, I’m positive someone out there will decide to turn it into a reality. And I’m not exactly sure that’s a reality I’d like to live in.

So hear the dire augury of this king cake harbinger, my young friends! Turn back, while you still have time, and king cake can still be enjoyed as a relatively simple Mardi Gras delicacy! Because, before you know it, we’ll all be eating king cake baked potatoes and king cake-flavored asparagus with our king cake ribeyes and king cake sauteed salmon fillets, while we drink king cake-infused Bordeaux and drive home in our king cake flavored automobiles running on king cake-derived gasoline, to go to bed in king cake scented sheets and dream of a simpler time in which cheeseburgers and chicken sandwiches were served on buns instead of king cake.

Heed this warning! It’s not too late. I urge you all, my New Orleans brothers and sisters: Be the king cake change you want to see in the world!