“You don’t need an expert—a psychologist or psychiatrist—to see that the people of Louisiana are hurting.” – Lt. Governor Mitch Landrieu

Hurricane Katrina was arguably the most significant natural disaster to affect New Orleans in the last century. The total population of the city was depleted to almost half. Over three hundred patients and over a thousand staff members were trapped in Charity Hospital during the flooding with no food, no power, and no chance for rescue. 70% of all occupied housing units were damaged in the flood. Over a million people were displaced during the storm. And nearly one thousand New Orleans residents died.

The toll of the physical damage was significant. $120.5 billion of federal funding was allocated to emergency relief, and years of rebuilding were required to make the city livable once more. What accompanied the physical destruction, however, was an immense psychological toll that indiscriminately affected the residents of New Orleans. 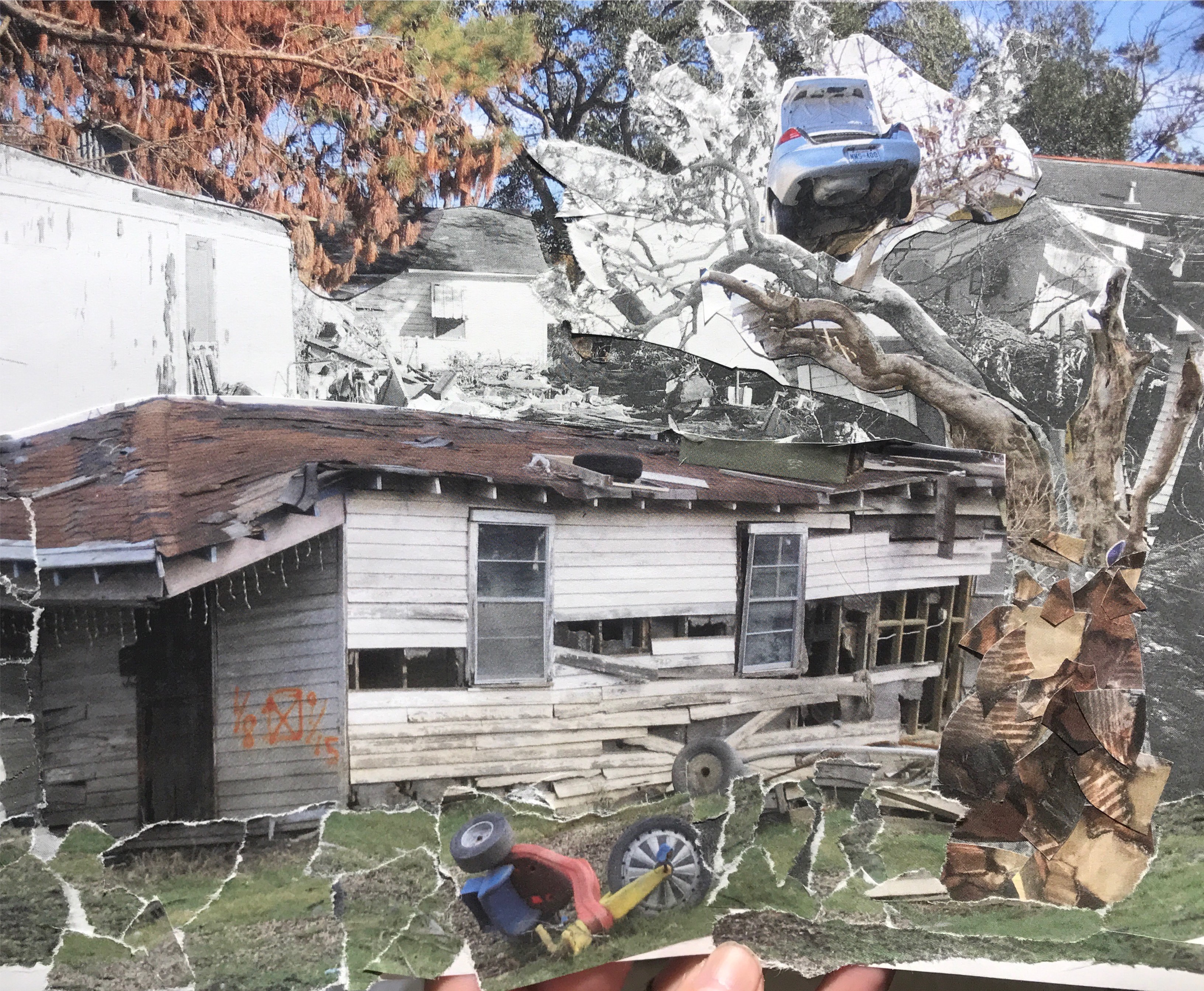 Collage of scrap house images (taken by Sophie Miller) as well as Katrina images from Wikicommons.

Mental healthcare in New Orleans has always been in crisis, even before the devastation of Hurricane Katrina. Louisiana as a whole has consistently received poor ratings for its mental health services and psychiatric infrastructure from the National Alliance on Mental Illness (NAMI). Louisiana’s evacuees during the storm reported significantly high numbers of prior diagnosed symptomatic psychiatric illness. The Substance Abuse and Mental Services Administration deemed Louisiana to be one of few states with the highest rate of serious mental illness and opioid use. Studies have shown a strong positive correlation deeming poverty as a major risk factor for mental illness; the national census reported the poverty rate in New Orleans to be 25.4% in 2018, a number significantly above the United State’s national average.

While the development of stress disorders due to the major stressors following Katrina were prevalent among the New Orleans community, perhaps the most devastating issues were those faced by chronically mentally ill individuals who found their access to mental health services depleted after the storm. Following the storm, the majority of hospitals in Orleans Parish shut down their psychiatric wards. Patients requiring mental health services or inpatient psychiatric hospitalization were forced into facilities in Baton Rouge, Alexandria, and Shreveport. Prior to the storm, 196 psychiatrists practiced in New Orleans; after the storm hit, only 22 remained. The state reported that the number of beds in hospitals allocated for mental health patients dropped from 487 to 190 beds, the majority of which were already filled will institutionalized patients. Emergency room staff were recorded berating police in an attempt to deter them from transporting mental health patients to their facilities. Patients with preexisting diagnoses of mental disorders that were successfully transported to emergency facilities were often discharged without physician evaluation, and many went on to commit acts of violence against themselves and those around them. Because of the lack of mental healthcare centers in post-Katrina New Orleans that were capable of conducting criminal reform programs, chronically mentally ill individuals who had committed crimes were sent to Orleans Parish Prison, which has since become the largest psychiatric facility in New Orleans.

We tend to put a premium on illness that we can see. Students are excused from class and employees are excused from work when they are plagued by a physical illness. We are less open in discussing or drawing attention to mental illness, and the aftermath of Hurricane Katrina was no exception.

Funding to psychiatric centers was the first to go during the relief period following the floods. Media coverage rarely touched on the psychological toll Katrina had on New Orleans’ residents. It is difficult at times to believe that mental illness is a recurring part of our society. One in five Americans suffer from mental illness and only one in three of those individuals will receive professional help. 545,000 young adults have reported feeling as though seeking help would cause them to face discrimintion from family, friends and employers.

Mental health reform across the United States is an urgent issue because it is likely that the people we are closest to are suffering silently without our knowledge. In Louisiana, however, the need for reform is even more urgent due to the fact that a disaster like Katrina only further amplifies the severity of mental illness. Major stressors accompanying the storm included displacement, loss of loved ones, destroyed property, refusal of insurance companies to compensate for damages, and countless others. 15 million New Orleanians were affected by Katrina, 15 million New Orleanians experienced the psychological toll of the disaster, 15 million New Orleanians were in need of psychiatric resources that their city could not provide, and countless New Orleanians are still suffering the consequences.

Antonionpp AntonioujiNI
Recent Posts on ViaNolaVie
Footprints: An interactive public art map Kelley Crawford, Steven Melendez, and Emma Fick worked together to create a custom interactive public art map for New Orleans. This project was made possible through a grant provided by EPNO (Emerging Philanthropists of New Orleans)! Take a walk and click away!

Beyond the EMT van: An outsider’s perspective on what it means to be a New Orleanian
Reflections

The poetic city: “Riding Out The Pandemic 4/4/20”
Creative Writing
We use cookies to ensure that we give you the best experience on our website. If you continue to use this site we will assume that you are happy with it.Ok