Hungry for change: A look into The New Orleans food crisis

While resting on the bench in Jackson Square Park, from the corner of my eye I saw an elderly man quietly hobble up to a trash can near my date and I. He delicately searched through its contents looking for food. Onlookers stared discreetly as the man continued, but none approached him and asked if he needed any sort of assistance.

After leaving the park, less than 10 minutes after seeing the elderly manhunt for lunch in the garbage, I saw a kitchen worker throw out two industrial (trash bag sized) bags of dinner rolls into a dumpster in the alley next to a restaurant. After seeing this series of events many questions ran through my mind, but the one that kept recurring the most was: In a town that boasts culinary excellence and leaves up to 40% of its food unused (according to the USDA), how is it that we allow residents to go so hungry that they resort to looking in the garbage for a meal when the equivalent to a three-course dinner was thrown out and wasted just minutes before only blocks away? 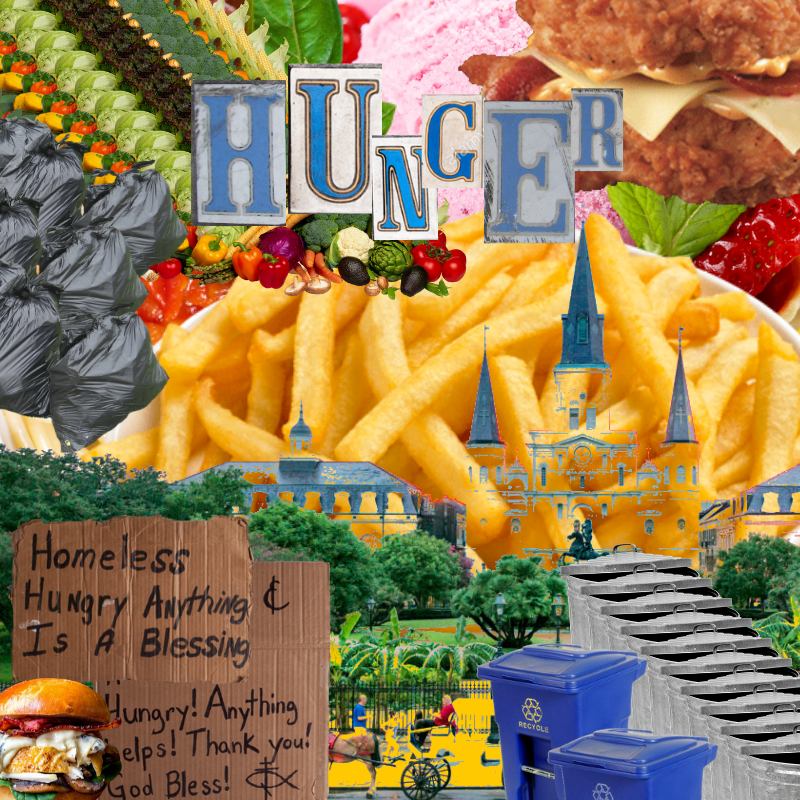 Louisiana is no stranger to hunger. Over 773,850 residents reported going hungry every day in 2018.  1 in every 6 residents and 1 in every 4  children are left hungry, even with over 19.05% of Louisiana residence (over 891,796 people ) using the assistance of government-instituted programs like SNAP ( Supplemental Nutrition Assistance Program), WIC, and the National School Lunch Program. On top of this, The New Orleans metropolitan area has the second-highest rate of senior food insecurity in the United States with over 1 million people being left food insecure. These numbers are heartbreaking, but when analyzing the lack of help hungry residents receive from the government, it becomes more understandable.

In 2018, Louisiana Congressman Ralph Abraham supported a version of the federal farm bill that would have excessive work requirements for SNAP recipients, making many current recipients ineligible for aid. It was also reported that SNAP benefits themselves are inadequate, with “more than 90 percent of SNAP benefits are used up by the third week of the month.” (3) This lack of governmental support for hungry residents snowballs when combined with Louisiana’s high poverty rate and rising homeless population, creating a multi-faceted puzzle that needs to be solved in order to cure the city’s hunger crisis.

Reported in 2017, New Orleans is the home of the nation’s highest poverty rate among cities in the U.S.A., the city’s steep poverty rate percentage of 18.6% brings down the average poverty rate for the state of Louisiana. In conjunction with Louisiana’s poverty rate generally, homelessness in New Orleans has risen for the first time in 11 years. In a census taken on April 26th, 2018 the population of homeless people in New Orleans was only 9, due to 60 agencies dedicated to fighting homelessness in the city. Less than a year later on January 28th, 2019 the homeless population had skyrocketed to 1,179 people. These statistics are important because poverty, food prices, and hunger are all connected (2). According to the Feeding America network, 72% of the households they served in 2014 lived at or below the federal poverty level. Generational poverty and homelessness have been a long term issue in Louisiana, tracing back to the city’s poor educational system and the low-wage tourism industry that drives it along with many other systemic issues (1).

Last year, Louisiana reported needing $396,905,000 per year to meet their food needs, meanwhile $990 billion or 1.3 billion tons of food that was wasted in 2018 by the U.S. as a whole. If only .0004 percent of the food wasted in America last year had been redistributed among Louisiana residents the hunger crisis would be well underway to disappearing, or at least the residents reported food needs would be met. Louisiana already has minor food recovery efforts in place, most of which are run through educational institutions and all of which are sourced by volunteers. Food recovery is the practice of gleaning edible food that would otherwise go to waste from places such as restaurants, grocery stores, produce markets, or dining facilities and distributing it to local emergency food programs.

In 2018, it was reported that the generation of food and food waste was so excessive that if unused food has been properly redistributed, we could feed every hungry person on the planet four times over. The Louisiana Food Recovery Network (FRN) is a collection of student volunteers at different Louisiana universities that work on recovering and redistributing food from their university’s dining services. To date, the Louisiana FRN has recovered over 80,000 pounds of food. Another local effort of food recovery and redistribution comes from NOLA’s Second Hand Harvest Food Bank.The Second Hand Harvest Food Bank has been working on providing free and accessible food since 1982. They recover food through partnerships with food industry companies and a donation program with farms and farmers, as well as a regular donation program. Despite the slow progress local volunteers have made, the current food recovery and rescue efforts in Louisiana are not nearly as effective as they could be. By investing in cost-effective and eco-friendly practices like food recovery, Louisiana will continue to step closer to resolving its current hunger crisis.

In a city like New Orleans that’s peppered with systematically-caused poverty issues, problem-solvers must turn to creative and un-costly outlets to fix the hunger crisis and food insecurity that plagues the city. One of the proposed solutions of low-cost nutritional aid is a focus on food recovery and redistribution with aid from the government and technology outlets. Louisiana could properly execute this by modeling their solution after that of the Netherlands. More specifically, when looking at the food recovery efforts in the Netherlands, it is important to recognize its status as the world’s least hungry country. The Netherlands’s food initiatives span from educational apps about food waste, to food recovery restaurants and rescue initiatives. They even announced a national program to further reduce food waste by recycling scraps into sellable items (turning bread scraps into beer and orange peels into soap and candles). If the United States and Louisiana took initiative to start a conversation about the utility of food waste to feed the hungry, they would be on their way to solving the crisis.

In order to come up with solutions for the hunger crisis, those who can help must make an effort to understand the plight of the hungry. The major issue that needs to be resolved is the lack of connection between the hungry and those who have access to and supply food. The type of conversation that must occur is one that has been attempted in many different fields, one being a political study done in 2017 in Germany.

Now, although the point of the study is to solve the polarized political parties in Germany by having Liberals and Conservatives sit down for a conversation in an attempt for them to understand each other, it also connects to the food waste and redistribution I’m suggesting (4). In the study, Germans of opposite political affiliations were paired through an easily accessible app in order to meet up and converse about their differences in opinion. This was done in hope of creating a greater understanding of each other and easing tension. The study did not resolve political tensions in Germany, but it did create an awareness and a conversation. Through advertising, tech-enabled accessibility (through the app they used), and the actual conversations Germans had with each other they were able to start what is growing into a larger conversation to bridge political parties together. If the groups trying to help the homeless and hungry population in New Orleans had the same type of platform that the study in Germany had, they would be well underway to fixing the hunger crisis.

Yes, New Orleans already has food recovery efforts, but they don’t have tech-assistance that spreads information about where homeless can get food or where they can glean. If the Louisiana government pitched in with minor efforts and precautions to recover more food, in conjunction with creating food accessible through advertising and infrastructure like apps and online forums (like the German study),  food would be much more accessible to the food insecure communities of New Orleans. This solution is not extremely costly and does not take an enormous amount of effort, but could mean the world those struggling.

Capitalism, and the Eviction of the Poor from New Orleans.” American

Actually Getting Them to (Gasp) Have a Civil Conversation.” Nieman Lab, 8 Aug. 2018,

This article was written for the class Alternative Journalism, which is taught by Kelley Crawford at Tulane University.