Are there mirletons in China? Somehow I doubt it.

The following article, originally published October 10, 2011 by Renée Peck looks at “food” as a cultural indicator, so interwoven in the very fabric of New Orleans culture. Food comes in many forms and many stages of production, and in the words of Renée, “our grocery shelves say something about who we are.” 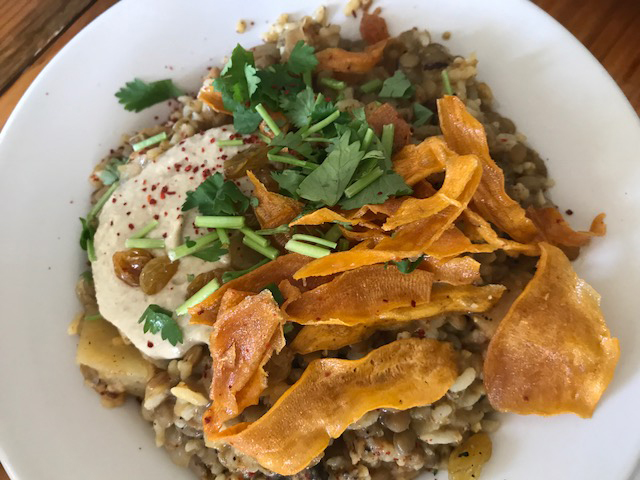 When you read this, I will be walking the streets of Beijing, where I am traveling on a down-and-dirty trip with a group of food writers. Plans include a session on Chinese noodle-making and various forays into restaurant kitchens, but I confess that I signed up for the 10-day itinerary so that I could cross the Great Wall off my lifetime bucket list.

Still, the culinary attractions of China loom large (I landed among these gourmet types because my first job at The Times-Picayune was food editor, which I got because I could write a good headline, not make Chinese noodles – but I digress).

We New Orleanians know that food defines a culture. When we travel together, Stewart loves to go to local grocery stores. He contemplates the sausage aisle with as much fervor as others do the Rubens room at the Louvre. For him, a grocery aisle or farmer’s stand is the ultimate cultural barometer of a country. Whole pigs hanging in the butcher shops of Spain or skinned rabbits in France say more to him about lifestyle than any museum or monument could do. Cheeses in Italy, olives in Greece or a pungent fondue in Switzerland are expressions of that area’s agriculture, industry, personality and leisure activities.

The fresh peaches we bought roadside in southern France – a sublime experience that the Great Wall will be hard-pressed to equal – conveyed something profound about the local pace of living and lifestyle choices. In a region that, I dare say, has yet to translate the phrase “slow food” into local lingo.

Same here. Our grocery shelves say something about who we are. The boiled corn at Rouses, with its clear-your-head tang of crab boil. Bins filled with hogshead cheese, shelves boasting various brands of pepper jelly, produce sections piled with mirletons. Shrimp etouffee in the soup aisle. Frozen turducken.

Here, grocery stores send deep tendrils into the roots of our psyches, reflecting who we are by how we shop.

I remember a newly arrived coworker from Philadelphia, who went to Schweggman’s to stock her fridge. “The women had koozies holding cans of beer on straps hanging from their necks,” she told me in wonder. “Beer. Koozies. Around their necks.”

Stewart loves the ‘60s music that blares through Dorignac’s. We both like the fact that, no matter where we go to pick up a quart of milk, we inevitably see people we haven’t run into since Carrollton Booster days. And when Robert’s reopened in Lakeview after Hurricane Katrina, it was a heart-wrenching moment. To walk the aisles and see local staples and rub shoulders with new returnees was a profound post-K moment.

Brett Will Taylor wrote a wonderful column recently about the quintessential life lessons he learns from the cashiers at his local Rouses. Judy Walker introduced readers to the bounty of farmer’s markets in our midst – places surely as much community meeting points as shopping meccas.

New Orleans cherishes its restaurants and its dishes, but perhaps a more revealing indicator of the culture lies in its food purveyors. Shrimpmen with ice chests hanging over the tailgate of a pickup on Veteran’s Highway. Produce peddlars who have traded 19th-century wagons for modern trucks, but still tout the freshness of their Creole tomatoes streetside. The Roman Candy man, who has yet to trade in the 1915 wagon bearing his wares.

Friends have been telling me that modern China is a lot like New York or London these days – the tangle of bicyclists largely replaced by cars and the traditional pajama garments giving way to Western business suits.

But I bet that the food continues to reflect the exotic culture of my imagination. I’m sure Beijing boasts modern supermarkets – and that its shelves are lined with foodstuffs just as unique as hogshead cheese or vracklings.

My mother has suggested that I make Chinese noodles for Thanksgiving. I think I’ll show off my pictures of the Great Wall instead – and share my impressions of things like the farmer who’s teaching us to make lunch, or the kiwi fields we’re visiting, that so surely define the culture.

Big Easy Living: a new kind of neighborhood
Reflections
We use cookies to ensure that we give you the best experience on our website. If you continue to use this site we will assume that you are happy with it.Ok