Reflections on a red, white and blue Thanksgiving

The following article, originally published November 19, 2012 by Renée Peck, uses the lens of Thanksgiving through which to analyze what makes New Orleans unique, and what unites New Orleans with cultures around the world: love of family, community, goodwill, and pride in one’s culture. 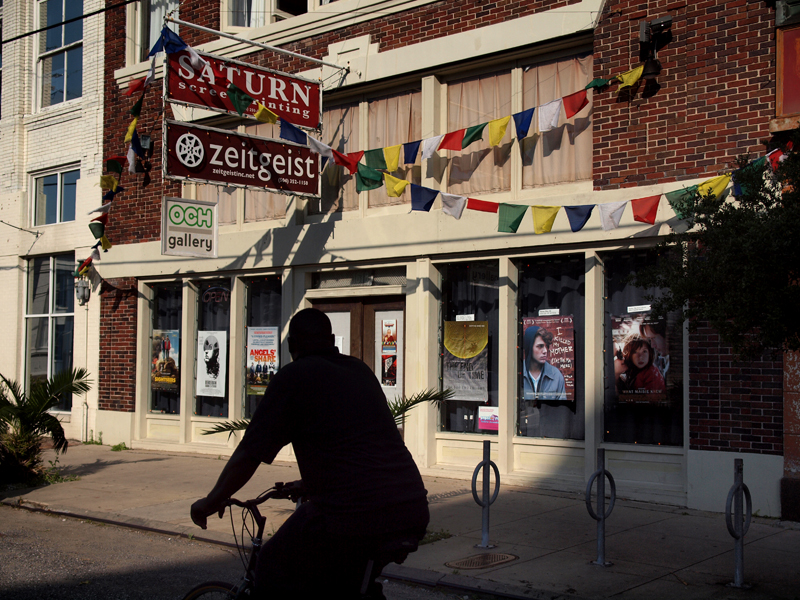 From prayer flags and red, white, and blue to international travel, sometimes Thanksgiving brings them all together. (Photo: Wiki Commons)

Around our Thanksgiving table, reflection is a mainstay of the celebration. At this time of year, counting blessings is as American as pumpkin pie.

This year I have much to reflect on. I’ve spent the better part of the past month under a trio of red, white and blue flags, none of them the Stars and Stripes. Recent travels have taken me to those international capitals that fly the French tricolor, the British Union Jack and the Lone Star of Cuba.

The first two involved trans-Atlantic treks to visit a daughter abroad, eat too much rich food, stroll museums like the Pompidou Center and monuments like Westminster Abbey, snap bad pictures and wander the streets of Paris and London in the rain.

The final trip came as part of a team from St. Charles Avenue Presbyterian Church, trained by Living Waters for the World to install a water purification system in Cardenas, a 2 1/2-hour drive from Havana.

Of the three, despite the Parisian gastronomy and London humidity, I find that New Orleans might well have the most in common with … Cuba.

Light shimmering at sunset on the jewel tones of a stucco façade crowded tight against a sidewalk in old Havana, nearby windows sheathed in lacy iron, sparks a deju vu sense of Marigny.

Cracked asphalt and ankle-deep potholes strewn along the dusty streets of Cardenas recall the similar stretch of street beyond my own Garden District door.

Plates heaped with black beans and rice and sidewalk kiosks proffering pina coladas are not so different from Monday menus or take-out hurricane bars here at home. And the strains of jazz notes wafting from late-night Havana dives echo eerily of Frenchmen Street.

There’s a genteel and tawdry loveliness to Cuba, a kind of Caribbean version of the stately grande dame that is New Orleans.

The parallels go deeper than the five senses, however.

The Cuban people love to talk. To everyone. Everywhere. They hug readily and clasp hands and touch cheeks with new friends. They embrace family and community with fervency. They like to dress up, and go out, and turn a meal into an occasion. They tend to stoop sit, although their stoops are cloaked as courtyard rockers.

Like New Orleans, Cuba has faced hurricanes, and poverty, and ineffective government. And they’ve learned, as we have, that grassroots efforts pay the biggest dividends.

To that end, entrepreneurship is beginning to thrive in the streets of Veradera and Cardenas, Matanzas and Havana. Since the government began issuing small-business licenses in late 2010, an array of cafes, nail salons, clothing shops, hardware stores and the like have popped up along streets once shuttered to the world.

Commerce is trickling into Cuba in other ways as well. “For sale” signs have begun to appear in car and living room windows, and cell phones, approved for public use just three years ago, are proliferating.

It is a narrow glimpse, however, of a Western lifestyle. The very sad thing about Cuba is that, despite its people’s incredible resourcefulness and creativity and high degree of education, opportunity there remains a small and hollow freedom.

Unlike us, Cubans aren’t allowed to grow their home businesses beyond the mom-and-pop stage. They can’t shop the Internet for a new TV, or call a friend in the U.S. for a chat. They can’t afford to splurge on a pair of designer shoes or dine out in a five-star restaurant. A weird, two-tiered financial system, with one kind of currency for tourism and another for residents, creates an economic chasm between the haves and have-nots.

Waiters, bellhops and bartenders, with access to tips in the tourist currency, are relatively flush. Professionals, including doctors and lawyers, don’t fare as well. Pastor Alison, the minister at Juan G. Hall Presbyterian church in Cardenas, where the water system was installed, makes $20 a month. He and his wife dine at a restaurant once a year, on their anniversary.

Elena, our translator and a university professor of English, told me she had always hoped to see a bit of the world beyond Cuba. When a friend invited her last year to Canada, she paid the high fee for a Cuban passport, but the Canadian government denied her a travel visa.

“Ah, well,” she told me. “I know my life here, and I will be happy here. But I would have loved to go somewhere else just one time before I died.”

The Communist Party continues to regulate most aspects of public life. When our team doctor, a pediatrician, asked to visit the local children’s hospital, he was told he would have to call party headquarters for approval. And when he tried to photograph a neurological clinic, he was warned, very politely, that pictures aren’t allowed without a permit.

A half-dozen Cuban families with friends or relatives in the U.S. gave us letters and Christmas cards to mail for them when we got back home. If mailed in Cuba, the missives, they said, would take months to make it the 94 miles across the Caribbean to this country. If they made it at all.

While ration cards reportedly are being phased out, they remain a needed source of staples for many. In Havana one afternoon, when word went around that a local distribution center had received a supply of chicken, a line formed instantaneously around the block.

“Every month, we think, this time we will starve,” Pastor Alison told me. “But the end of the month comes, and we think, we made it, but we do not know how.”

As Thanksgiving approaches, I reflect on people across the world who are living under various red, white and blue flags.

I think about the things they share, like love of family and community, innate goodwill, pride in country.

And I think about the things they don’t share. Things that we in New Orleans often take for granted. Like mailing a letter, or taking a picture, or getting on a plane and traveling, just once in your life, somewhere else, to get a small glimpse of the world.