Editors Note:  The following series “Beyond the Beignets: An authentic look at New Orleans” is a week-long series curated by Rena Repenning as part of the Digital Research Internship Program in partnership with ViaNolaVie. The DRI Program is a Newcomb Institute technology initiative for undergraduate students combining technology skillsets, feminist leadership, and the digital humanities.

Because I live in New Orleans as a Tulane student, I often feel like a visitor instead of a resident because Tulane’s social life is disconnected from the city’s year-round residents. When creating Beyond the Beignets, I compiled 10 articles that articulated an often overlooked part of city life. At the federal minimum of $7.25, New Orleans’ mandated wage is hardly livable for anyone to support themselves. Low minimum wage increases income inequality and prevents the upward mobility that many of New Orleans’ residents work so hard to achieve. This article was originally published on September 13th, 2019.

This story is reprinted with permission from The Lens, New Orleans area’s first nonprofit, nonpartisan public-interest newsroom, dedicated to unique investigative and explanatory journalism. The original story and ways you can support The Lens can be found here. 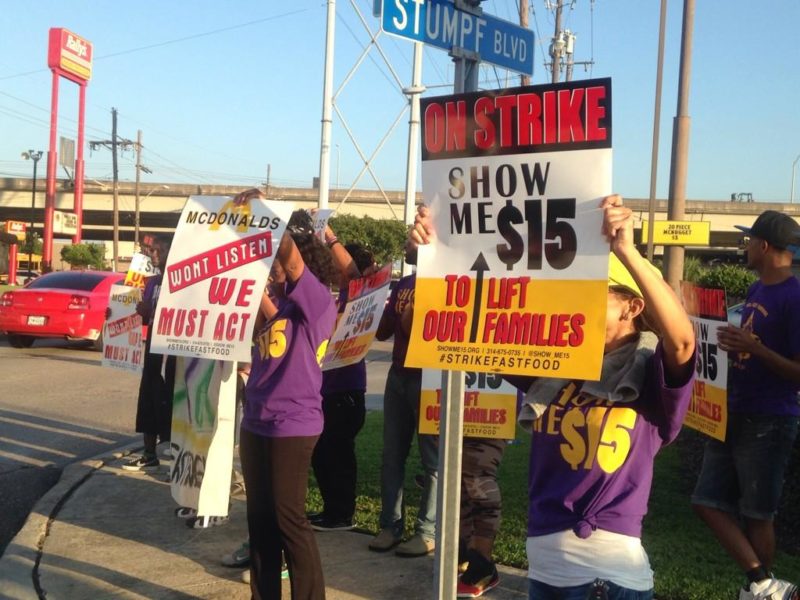 Here’s my Labor Day message for New Orleans’ elected leaders and everyone running for office this year: stand with workers like me who are fighting for the wages we need to raise our families with dignity. My coworkers and I are doing essential work for the City of New Orleans, and we should be paid like it.

I drive trucks to lay asphalt. I like my job, but breathing the chemicals is bad for my health. I worry about what would happen to my kids if I couldn’t work anymore. In the years since Hurricane Katrina, the cost of living in New Orleans has risen steadily. I’m struggling to pay rent and keep the water and lights on. I don’t always have enough to afford groceries, but I make too much to qualify for food stamps.

No matter how hard we work, we struggle to make ends meet. City workers need to make $15 an hour, period.

In 2017, visitors to New Orleans spent $8.7 billion in our city, an increase of 6% over the previous year, which had also broken records. We also hosted a record number of visitors – nearly 17.7 million people came to enjoy all New Orleans has to offer. It seems that business in New Orleans is booming everywhere but in workers’ pocketbooks.

That’s not right, and it’s time for us to demand more. McDonald’s workers, who first fought in New York in 2012, have proven that coming together to fight for higher wages and better working conditions benefits everybody in the community. Across the country, more than 24 million workers have won over $70 billion in annual raises with Fight for $15 and Unions. Cities, states, and private companies have also raised wages.

Meanwhile, in Washington, D.C., the U.S. House of Representatives passed a $15 national minimum wage – the first time in 10 years Congress has voted to raise the minimum wage. But it’s stuck at $7.25 because Senate leadership refuses to bring it up for a vote.

We’re stuck here in New Orleans, too. Stuck with promises from politicians that haven’t materialized in our paychecks. I believe strongly that public money must be used for the public good, and that means that jobs using public finances must pay fair wages. During the last election, six of our city council members and the mayor said they agreed and committed to supporting a $15 minimum wage. It’s time they acted.

Twenty years ago, corporate lobbyists pushed a law through the state legislature aimed at keeping New Orleans from raising the minimum wage for all workers in our city, but they couldn’t restrict pay for city workers. Just last year, Mayor Latoya Cantrell raised the minimum wage for city workers to $11.21 an hour. This is a positive step, but it isn’t the $15 we need to not only survive, but thrive in a city that we are helping to grow.

This Labor Day we’re done waiting! City leaders have the power to set a living wage for city workers and together with my coworkers, my fellow brothers and sisters in the Service Employees International Union and the working people of New Orleans, we call on them to take action.

Toinette Johnson is an employee of the New Orleans Department of Public Works, and a member of SEIU Local 21.

The opinion section is a community forum. Views expressed are not necessarily those of The Lens or its staff. To propose an idea for a column, contact Lens Founder Karen Gadbois.