Traversing concepts of time and place with Dr. Sepehr Saberian and the santur

“In a garden of cypress and pine trees under the soft summer night, tiny water-canals and candlelit paths lead to a polygonal kiosk open on all sides, with an open dais in front. Six cushions in a half-moon arrangement face an audience – men and women, young and old – seated around the stage. From behind the pavilion appear six young musicians…Singing in Farsi, the vocalist delivers an evocative line: ‘On my tomb, sit down with wine and a musician…’” — A description of a musical garden by scholar Ameneh Youssefzadeh

The description above depicts a pre-twentieth century Persian musical garden — an idyllic environment where Persian classical music was played and poets, philosophers, and musicians gathered together to create, to think, and to escape the daily burdens of life. Now, picture this garden again. But this time, picture it in Houma, Louisiana and the player on stage is Dr. Sepehr Saberian.

Sepehr plays the santur, which is the Persian hammer dulcimer. “The [santur’s] foundation is based out of walnut wood,” Sepehr explains. “It is built in a trapezoid shape, and the strings are mounted on top. There are 72 strings — 36 made out of copper or brass and 36 made out of stainless steel.”

While the exact date of the santur’s creation is widely debated, scholars know that it was brought to Europe during the Middle Ages, so it was most likely present in Mesopotamia decades or, more likely, centuries before then. In other words, the santur that Sepehr has nestled in the corner of his home, under a sun-filled window in Houma, reverberates sounds that could have accompanied the words of 13th-century poet Jalal al-Din Rumi (“We rarely hear the inward music, but we’re all dancing to it nevertheless…”), or influenced instruments that nudged their way into Geoffrey Chaucer’s Canterbury Tales (“He kist her swete, and taketh his sautrye, And pleyeth faste, and maketh melodye have possibly heard.”). With nine bridges on one side and nine bridges on the other, the santur resonates 24 notes, or three octaves.

Yet, when the strings are struck with the two wooden mallets (mezrabs) that Sepehr delicately holds looped around his pointer fingers, the vibrating sounds seem to turn the air into a conductor of something much larger than a carrier of octaves, notes, and melodies. For Sepehr, the santur holds a connection to his family and his culture.

He was introduced to the santur by his grandparents. When he was a child, they came to his house with two instruments — a sitar and a santur. The idea was that Sepehr would play one and his mother would play the other. Obviously, we know which instrument Sepehr chose, and even though bundles of years have passed since he was that child first being introduced to the santur, he stills feels a connection to that moment and the encouragement his grandparents offered, and continue to offer him. 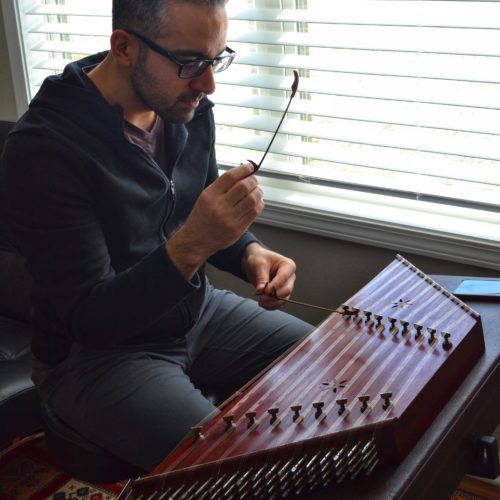 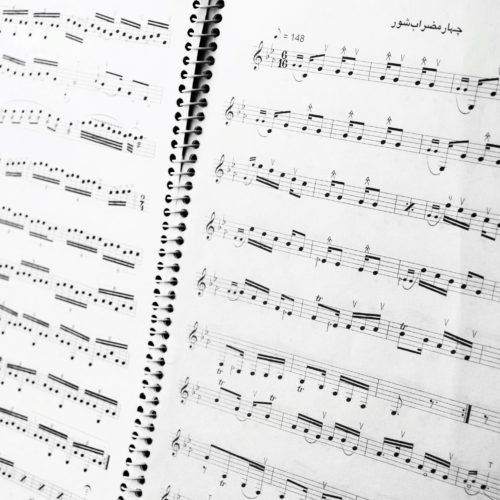 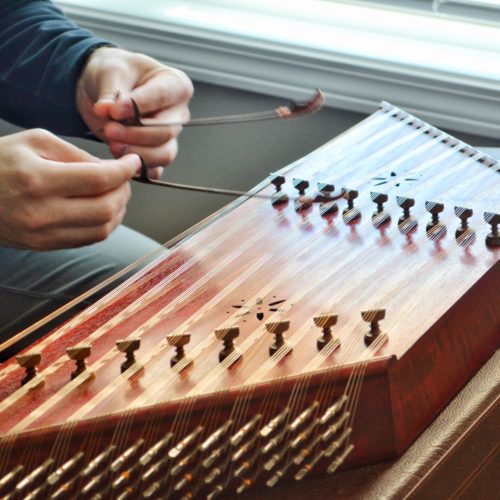 With undergraduate school leading to medical school, which then led Sepehr to a fellowship in cardiology, he has moved from continent-to-continent; country-to-country; state-to-state; and town-to-town, but he’s brought this piece of home with him on every journey. As he says, “I feel like at every transition [in life] I move further away from where my family is in Canada. This instrument is my one piece that connects me to that culture, which I value so much.” These intimate connections hinged together through music is what scholar Ameneh Youssefzadeh, from his book, The Other Classical Musics, researched and surfaced about Persian concerts and gatherings. As Youssefzadeh says, “…until the twentieth century most classical music was performed in private gatherings – for small circles of connoisseurs…for family and friends, or in festivities including poetry recitation: the public concert was essentially a Western phenomenon.”

The rooted intentions surrounding musical gatherings, and eventually concerts, were about existing in an enclave where separations were minimized and connections were sparked and fostered. With all the schisms that separate and divide humans, we are universally drawn to music. “With regards to music, historically,” Sepehr says, “the past offered times when music and musicians were more nurtured and possibly more accepted. They held higher places in society,” which of course allowed these musicians to hone their skills, their craft, and their creativity, and then they would share their creations with all who wanted to listen. “Through those environments where you had the geniuses come forward,” Sepehr says “…your Mozart or Beethoven transcended, and the music they created is so timeless.”

Perhaps this ability to traverse time and speak into what was past, what is present, and what will be the future is what allows listeners to transcend their own experiences when they hear or play music. For Sepehr, there are absolutely times when he gets “lost” in his playing. But, he doesn’t think that feeling and connection he experiences when playing the santur is unique to him. “I have a friend who felt the same way about a soccer ball,” he says with a smile. For Sepehr, “It’s a function of connection, devotion, interest, and concentration.”

With this devotion to the santur, I had to ask if Sepehr every thought about or thinks about playing another instrument. With a glow coming to his eye, he enthusiastically responds with a strong, “Yes.” As he says, “It depends on what I’m listening to in that moment. On the way here, I was listening to an Italian baroque composer, Marcello. I was listening to an oboe concerto that I’m very fond of. So, today, I want to play the oboe. The day before, I might have wanted to play the piano.” With a smile that maybe he had when he first laid eyes on the santur, Sepehr says, “I’d like to play everything, if I could.”

In that way, Sepehr could create a garden of music, and it could basque in the sunlight among the waving and rustling grasses of Houma, Louisiana, or go with him wherever his next journey may lead.

(A song on the santur, played by Dr. Sepehr Saberian)

Conversations with artists: James Michalopoulos and the artist’s eye
Artists
We use cookies to ensure that we give you the best experience on our website. If you continue to use this site we will assume that you are happy with it.Ok