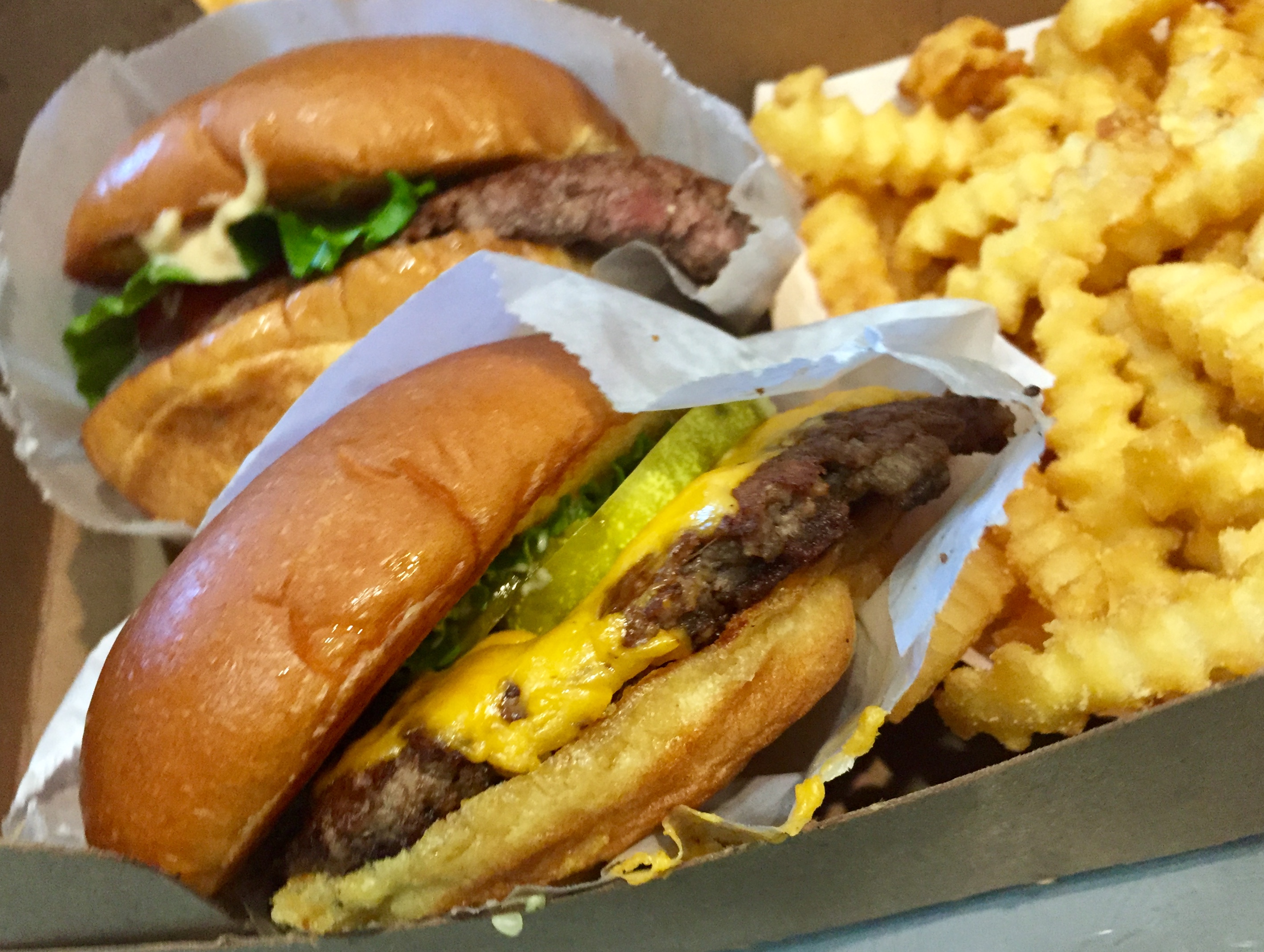 Like many red-blooded, God-fearing, patriotic, burger-loving New Orleanians, I was elated when the local food news announced that, at long last, the Crescent City would finally be getting its own Shake Shack.

I have good reason.

Though I’m a NOLA native, I spent a good dozen years living in New York City as a young man. It was there that I, like many before me, discovered the joys of the Danny Meyer restaurant empire. Union Square Cafe was, and still is, one of my favorite restaurants in the Big Apple, and Gramercy Tavern, where my good friend Toby once manned the bar, was also a grand spot for romantic evenings and to celebrate special occasions. Meyer’s famed dedication to the art of hospitality lives up to its deserved reputation.

I can’t remember who, exactly, told me about Meyer’s fast food kiosk experiment in Madison Square Park. It was probably a handful of people — all in hushed, reverent tones — before I finally decided to stop by and find out what all the fuss was about. I mean, it’s just a burger, fries and frozen custard, right? It’s not like New York was hurting for places to find those items in 2005. Still, “there would be a line,” my compatriots warned. And sure enough, when I headed over to the park a sunny, Spring day in Manhattan, I was shocked to find a neat queue of people lined up from one end of the park to the other.

“There must be drugs in the shakes,” I remember muttering to myself. You’d be hard pressed to get many Americans to wait an hour or more for a simple fast food meal without undue complaint, much less New Yorkers, who I’ve personally seen erupt into apoplectic fits of boiling rage when the person in front of them in line at the bank waited more than ten seconds to move forward. If not drugs, then clearly, something special was going on in that modest, ivy-covered little burger hut. Whatever was going on, it wasn’t normal.

Maybe it was finally getting to eat my burger and fries after waiting in that line for an hour and a half, all the while being punished with the sacrosanct aroma of flat-top griddled beef and salty, deep fat fried potatoes. Perhaps it had something to do with enjoying a perfect, simple treat on a gorgeous day in a New York City park. Maybe the food really was that good. Or maybe there really were drugs in the food. Whatever it was, some sort of alchemy took place that afternoon for me, and from that day forward I was officially a Shake Shack acolyte.

So you can imagine the pain I felt, after moving back to NOLA in 2012, upon witnessing the Shack’s conquest of world domination, spreading to every conceivable corner of the globe…except for New Orleans. There were Shacks in places like Manila, Seoul, London, Singapore, Hong Kong, Istanbul, Moscow, Muscat, Beirut, Dubai, Abu Dhabi, Doha, Kuwait City, Riyadh, Shanghai, and FOUR in the Dallas area…but not a single location in Louisiana. “Seriously,” I mentally projected to Danny Meyer. “There’s a friggin Shake Shack in the Tokyo airport. You can’t honestly tell me that you aren’t able to shove one into Metairie somewhere. Or even Destrehan. I’d even take that. What gives?”

Well, it appears as though my furious telepathic entreaties made their way to Meyer somehow, because we now, finally, have a Shake Shack in Metry, with another to follow downtown, in Canal Place. Per my usual protocol, I just barely managed to tamp down my Shack-thusiasm through the opening week crowds (I try never to visit a new restaurant in the first couple of weeks, a habit I acquired during my days as a restaurant critic), and just recently made it out to the Metairie location for my trusty order of a double Shackburger, fries and a concrete.

I got exactly what I was hoping for: two nicely seasoned, griddle-smashed burger patties cloaked in American cheese on a perfectly pliable potato roll (gently slathered with butter and crisped on the grill) with pickles, tomatoes, crisp green leaf lettuce, and “ShackSauce™.” On the side were crispy, fluffy, crinkle cut fries, and the coup de grace, a thick chocolate “concrete” stuffed with brownie chunks and decadently festooned with Mast Brothers dark chocolate shavings. With that, I was happy. Okay, maybe I was kicking myself a little for going overboard with the double with fries and the frozen custard, but hey, “in for a penny, in for a pound,” right? I regret nothing.

Now, here’s the thing: inasmuch as I rejoiced in my first New Orleans Shake Shack experience, I’m fully aware that there are more than a few burger aficionados in this town who feel quite differently. After all the hype, the massive lines, PR and news stories and TV coverage out the wazoo — not to mention people like me shouting to whomever will listen (and many who won’t) about how much they love this place — New Orleanians might be a little miffed to discover that a proper Shake Shack experience is not a rapturous one. As good as a Shackburger and those concretes are, they’re probably not going to send you into paroxysms of spiritual bliss. Those crinkle cut fries, similarly, will most likely not make you renounce all your worldly possessions, claim that you’ve seen the face of God, and give you no other option but to light out for the nearest monastery and spend the rest of your days silently contemplating the myriad magesties of the everlasting divine.

What you will get at Shake Shack, however, is a quality hamburger, prepared fresh to order, well-executed fries, and truly excellent frozen custard. That’s pretty much it. If you were expecting Shake Shack to be the end-all-be-all, the alpha and omega hamburger experience the world has ever produced, I’m sad to say that you’ll be disappointed. If, on the other hand, you’re hoping to have an experience similar to what you’d find at any other Shake Shack, you should be wholly satisfied. I know I was.

So, now that the Shack has claimed New Orleans among the cities it’s conquered, is it the best hamburger in the 504? I’ll also say a definite “no.” Which doesn’t mean that it’s a bad burger, by any stretch of the imagination. But compared to, say, our homegrown and much beloved Company Burger, it doesn’t quite cut the mustard. (I’ll stack CoBu against In-and-Out, Five Guys, or whatever your geographical burger obsession is any day…and I’ll win.) Similarly, it lacks those beautiful steam-griddled onions you’ll find at Lee’s, the masculine heft of a Beachcorner burger, or the cultural importance of a Port-of-Call burger falling apart with gooey shredded cheddar and sauteed mushrooms. Those singular phenomena will forever live in our hearts, in our memories, and, most importantly, in our bellies.

Feel free to keep the angry torches and farm implements at bay for now, NOLA burgeristas. As satisfying as some folk may find it, Shake Shack isn’t going to best all of your beloved faves. And, suffice it to say, the Shack will NEVER be Bud’s Broiler or Ground Patti. (Could anything?) That said, let this be fair warning to chains like In-and-Out, should they be planning an expansion to the Crescent City: maybe give it a few years. We New Orleanians need some time to process new things and ideas, being the notoriously provincial people we are. Otherwise, it’ll be pitchfork o’clock up in here. When that time comes, I’ll be sure to get a head start from the gathering mob.

Just don’t get upset if I decide to order a concrete and some crinkle fries to go, however. I’m only human.