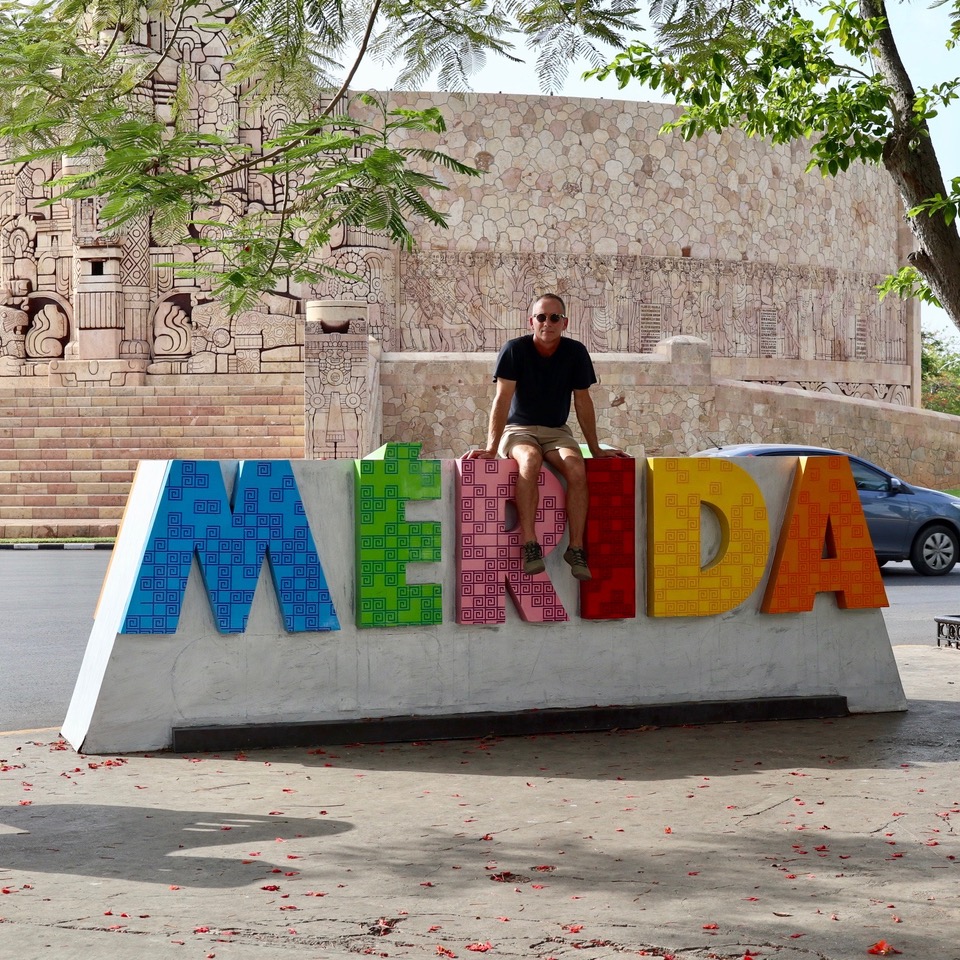 The writer on the sign to Mérida. (Photo by: Folwell Dunbar)

I left our hotel and started walking toward the Zocalo or Main Square. After only a few steps, beads of sweat sprouted from my forehead. By the end of the block, I was a walking water feature.

“It is one of our sister cities,” my wife reminded me.

New Orleans has a number of “sister cities.” They include places like Caracas, Venezuela, Durban, South Africa, Matsue, Japan, and of course Orléans, France. We were in Mérida on the Yucatán peninsula. To me, it is the relative with the most NOLA DNA.

If the world were flat and vertical, you could drop a string of beads from the Cabildo and it would get hung up on the Palacio Canton in Mérida. The capital and largest city of the Yucatán is due south of the Crescent City. Strangely (and sadly) there are no direct flights.*

Like New Orleans, Mérida is on the Gulf of Mexico – but not really. It’s too far away to enjoy a cool breeze off the water, yet just close enough to get ALL the humidity. It is also flat. It doesn’t enjoy the benefits of elevation like Oaxaca, Cuernavaca or San Miguel de Allende. As a result, people spend much of their time ducking the cruel climate. They live in cavernous buildings with high ceilings and fans; they dive into cool cenotes and atrium pools; they gravitate toward the shady side of the street; they take long, LONG siestas; and they come out at night and douse themselves in cool adult beverages like micheladas, piña-habanero margaritas, and mojitos. Or, they simply dull the pain with shots of smoky mescal. In other words, they behave like New Orleanians.

Mérida, like New Orleans, is a city of booms and busts. It thrived after the Spanish conquest and then again during the henequen heyday. Henequen is a fiber produced from agave leaves. It was used primarily for the production of industrial twine – big rope for big ships. Like cotton and sugarcane in Louisiana, it became the dominant cash crop on the peninsula. Wealthy  hacienda owners built huge mansions on the Paseo de Montejo, their version of Saint Charles Avenue (with palm trees instead of live oaks).

When the DuPont Company of Wilmington, Delaware invented nylon and other synthetic fibers in the mid 20th century, the henequen business shriveled up like a dead iguana. The city contracted and its mansions fell into disrepair. It looked (and felt) a lot like New Orleans after the oil bust in the 1980’s.

Today, like post–Katrina New Orleans, Mérida is experiencing a bit of a Renaissance.

Tourism is on the rise. Cruise ships dock in the port city of Progreso, and send buses to nearby attractions: Mayan ruins, the Celestun Biosphere Reserve with its pink flamingos, the walled coastal town of Campeche,** Gran Museo del Mundo Maya and, of course, Mérida. Henequen haciendas have been converted into wedding venues, retreat destinations, spas and resorts, and the once dilapidated mansions along the Paseo de Montejo have been restored and converted into museums like Casa Museo Montes Molina or boutique hotels like Rosas & Xocolate. 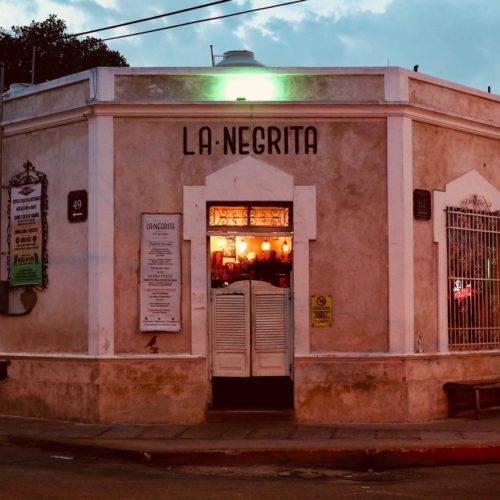 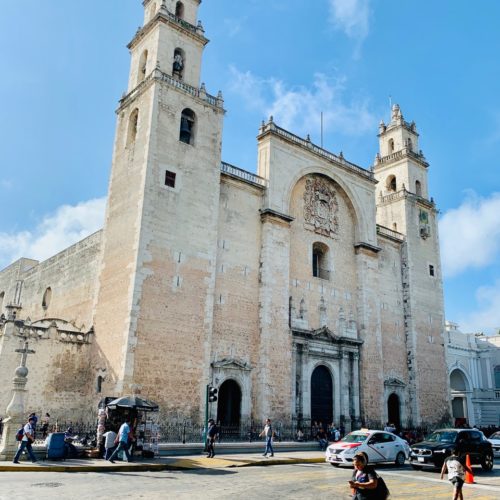 The Cathedral in Merida. (Photo by: Folwell Dunbar) 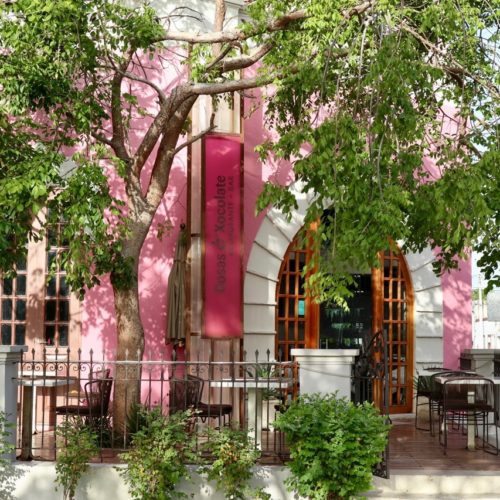 As with New Orleans, Mérida’s draw is its rich history and culture. Take for example architecture. While New Orleans has more homes on the National Historic Registry than any other city in the country, Mérida has more colonial structures in the Americas than any other city except Havana and Mexico City. And, like here, some of those structures are immaculately restored, while others are falling over from neglect.

Its regional cuisine is also exceptional. Recognized by celebrity chefs like Samin Nosrat of “Salt, Fat, Acid, Heat” fame, Mayan influences are now being felt (or should I say, tasted) as far away as Tokyo, Lima, and Rome. The Yucatán version of our “creole” includes dishes like salbutes, panuchos, cochinita pibil, papadzules, poc chuc, sopa de lima, and pavo en relleno negro. Chic restaurants like Apoala, Nectar and K’u’uk are riffing on these classics, and cooking classes for wanderlustful gringos can be found throughout the city. 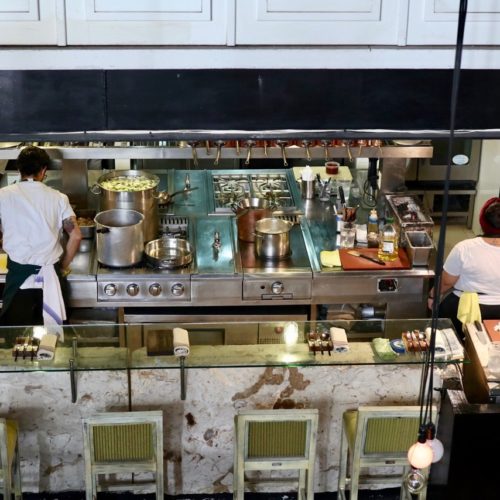 The kitchen at Nectar. (Photo by: Folwell Dunbar) 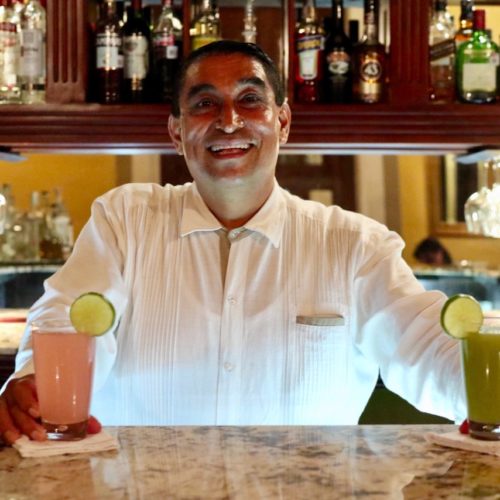 Jose Castro with his latest concoctions. (Photo by: Folwell Dunbar) 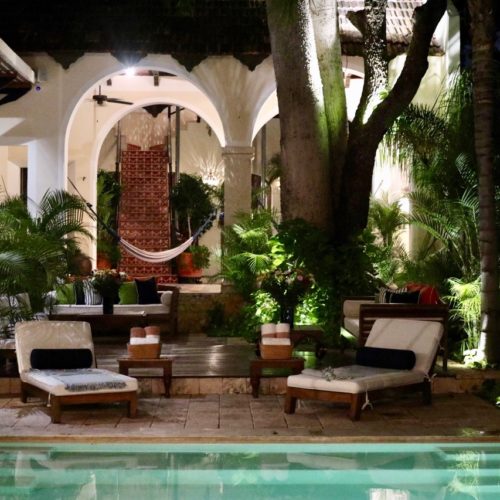 After Hurricane Katrina, young altruistic carpetbaggers from hipster hotbeds like Brooklyn, Austin and San Francisco descended on New Orleans. They quickly discovered what locals have known all along, the city is seriously cool (figuratively speaking of course). It has all the character (Pronounced “Caracta” by the late Dr. John) at a fraction of the cost. Likewise, young people from Mexico City seeking a more affordable Roma or Condesa barrio, have been humping it down to the Yucatán. The colonial city is now pulsing with youthful exuberance.

Our bartender at Casa Dominga, a trendy destination in a trendy neighborhood, looked like a Bywater hipster. He was wearing a mix of modern and vintage clothing, and he was sporting a carefully coifed man bun. His parents were from Italy, but he had grown up in Mexico City. “I moved to Mérida because there were more opportunities,” he said. “I work here at night, but I also launched an agave worm salt business.” When we enquired about the salt, he proudly returned with a box of samples – and several shots of small batch mezcal.

Our bartender at Casa Lecanda, Jose Castro was from Mexico City too, though a bit older. “Soy  un hombre de ideas,” he said, “I am an idea guy. I have seven new ideas every seven days.” He proceeded to share a couple of his latest concoctions, along with his favorite snack, baked grasshoppers or chapulines.

We experienced more of that “youthful exuberance” Saturday night on the venerable Paseo de Montejo. The street, once reserved for the landed gentry, was now teeming with young artists and entrepreneurs. They were selling paintings and photographs, organic produce from nearby milpas or traditional Mayan farms, artisanal xtabentún and pox, and even handbags and clothing made from henequen – the newcomers are actually breathing new life into a dead industry.

Ali is from Lyon, France. He fell in love with an American and moved to Chicago. When the relationship came undone, he went on a sojourn to Bora Bora. There, he met the owners of Coqui Coqui, an internationally renowned perfumery and design company that got its start in Tulum, Mexico. They offered him a job in Mérida. He now works at the company’s new art foundation. “I love it here,” he said in Spanish with a French accent. “The city has a lot of history, but it’s also very creative. You feel like anything is possible.” 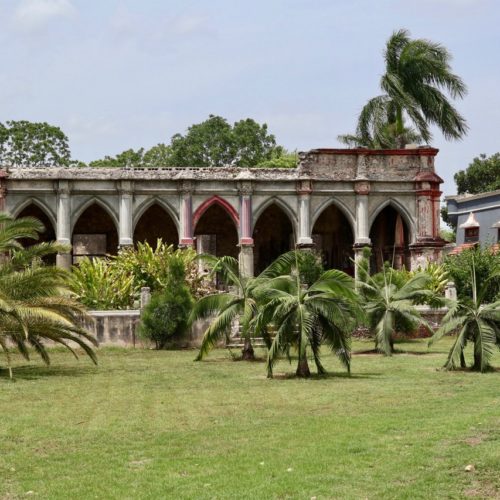 Ruins of a henequen hacienda. (Photo by: Folwell Dunbar) 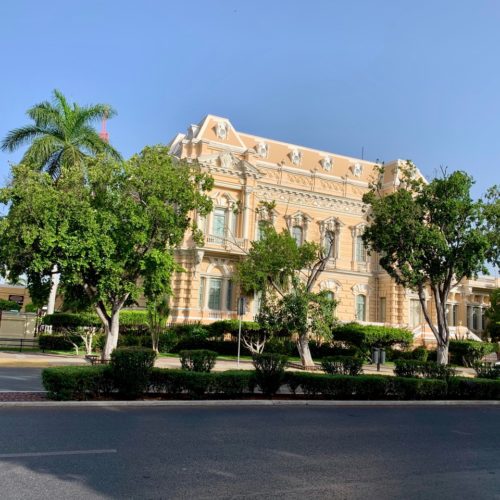 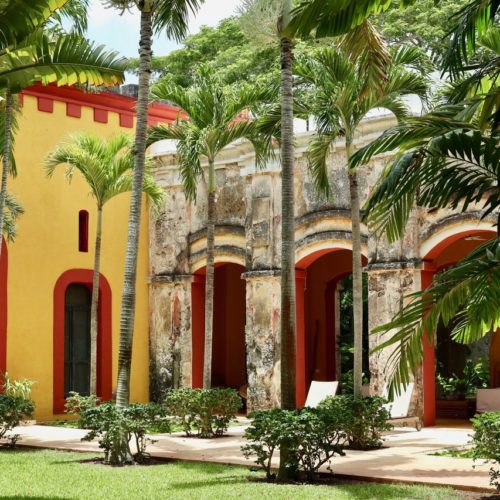 Because of its culture, funkiness and affordability,*** Mérida also has a thriving expat community. It rivals that of Puerto Vallarta in the 1950’s or even San Miguel today. There is a French bakery called Escargot that serves delicate buttery croissants, an Irish pub that has beer on tap from the Emerald Isle, and a communal library filled with English language books. You run into people on the street from Madrid, Toronto, Tel Aviv, Sydney and yes, even New Orleans.**** On the flight to Mexico, we sat next to a retired lawyer originally from Monroe, Louisiana. He had lived in the French Quarter for more than a decade before moving to Mérida. He bought an old house in the old section of town and fixed it up. “It wasn’t a difficult transition,” he said. “The people down here are just as friendly – even if you don’t speak the language. And, of course, it’s equally hot. Even though the cost of ling is cheap, my AC bill here is actually higher than it was on Bourbon Street.” 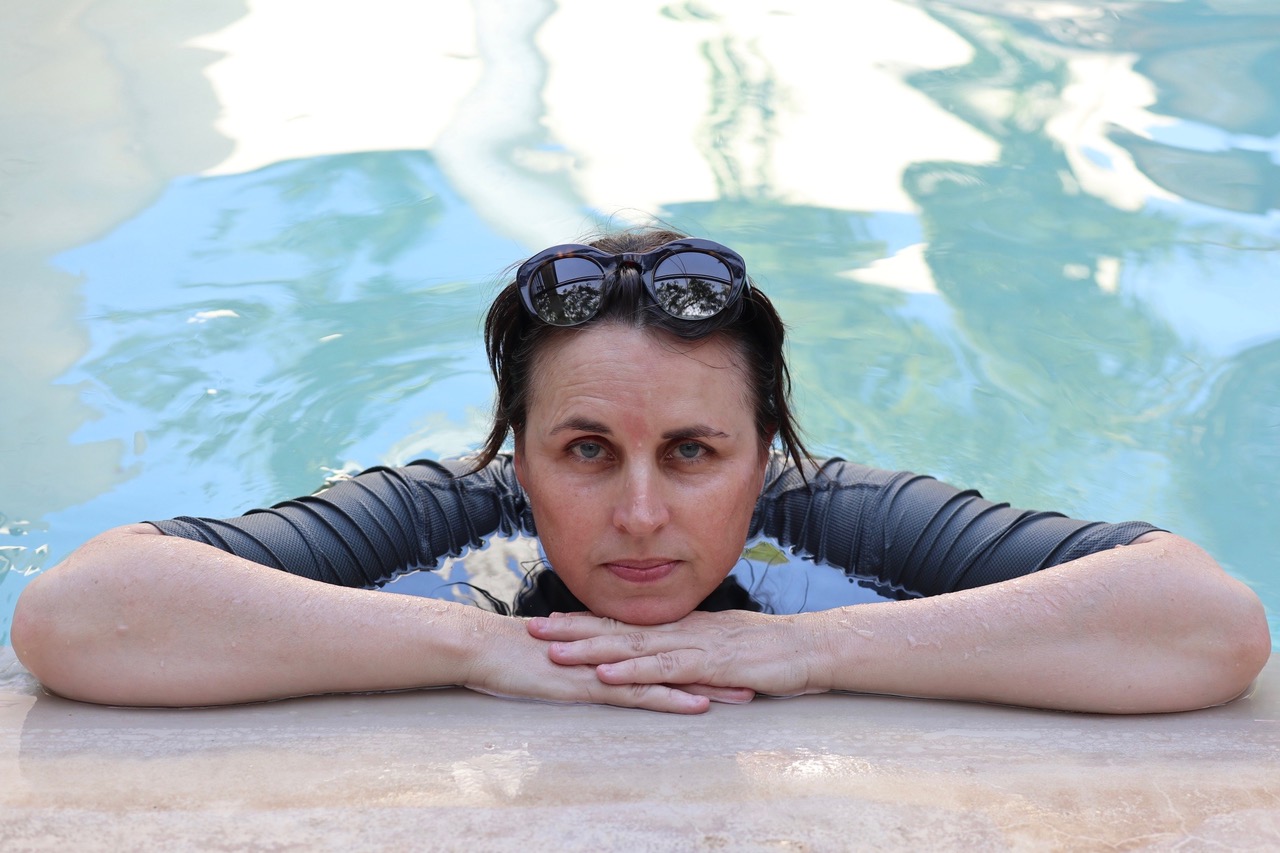 The writer’s wife escaping the heat. (Photo by: Folwell Dunbar)

La Negrita, a popular Cuban bar was a block away from our hotel. Happy Hour began promptly at 5:00 o’clock, possibly the steamiest part of the day. The patrons poured in, and the bartenders poured Havana Club. By the time the band began to play, the place was packed. Young and old, rich and poor, locals and extranjeros drank daiquiris and cold beer, danced and sweat. It reminded me of the Maple Leaf Bar on a hot summer night.

If you are a fan of New Orleans, you will definitely enjoy our sister city to the south. As they say down there, “Si, vale la pena.” Literally, it’s worth the pain – or, in this case, the sweat.

* There are direct flights from Houston and Miami. If you book early, you can get there in just under five hours. You can also fly to Cancun and take a bus or rent a car. If you do, make sure to stop in the colonial town of Valladolid.

** There are only a few walled cities in the Americas. Cartagena and Quebec are the most popular.

*** At the City Museum of Mérida, I discovered that there had been a barrio or neighborhood in the 19th century made up of New Orleanians – go figure.

**** Because of its limestone buildings, Mérida is often referred to as the White City. It could just as easily be called “The Big Easy” or “El Gran Fácil”.

Folwell Dunbar is an educator and writer. He’s the author of He Falls Well: A Memoir of Survival. He lives in New Orleans, but he aspires to own a home (with AC and a pool) in Mérida. He can be reached at fldunbar@icloud.com

The nightmare at Dreams, a family’s misadventures on the Mayan Riviera
Creative Writing

Running the Nola Gauntlet: A commuter’s lament
Creative Writing
We use cookies to ensure that we give you the best experience on our website. If you continue to use this site we will assume that you are happy with it.Ok