Krewe: Thanks for the tip, a look into service work in New Orleans 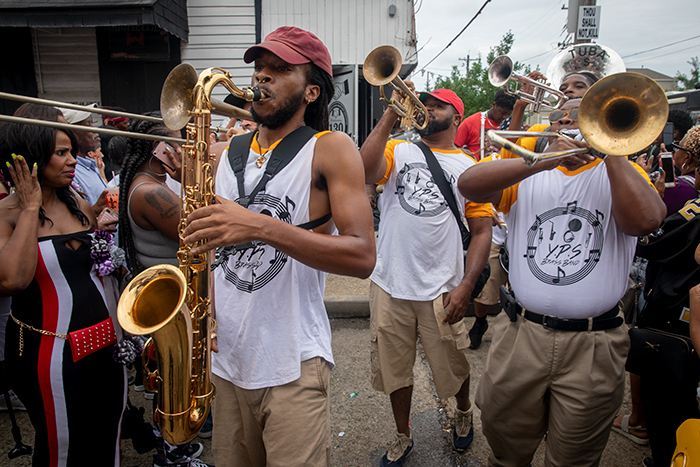 Tourism is one of New Orleans’ primary economic contributors. Every year, millions visit the city to take part in its unique cultural experience. However, few realize what it actually takes to keep this industry running.

Jirus is a line cook at Deanie’s Restaurant, a mid-priced seafood restaurant just on the outskirts of the Quarter. It’s not necessarily the center of attention, but its popularity rivals every other place in the area. There was a tired look in his eye, and his voice was soft spoken. Jirus has worked as a cook since he was in high school, first KFC, then Burger King, and eventually making his way up to Deanie’s. He’s luckier than some; not every cook in the city is able to move up in the restaurant business. Jirus works every day from 9:00 AM to 12:00 AM. These are outside Deanie’s regular hours, but for anyone who knows anything about working in a restaurant, that buffer time is necessary to prep, clean, and close. The long hours, confined environment, and constant string of orders makes for grueling work.

Jirus barely gets any time to himself, getting off late enough to pass out as he gets home and getting just enough sleep to restart his day almost immediately. Luckily, he has a car, and is able to avoid long hours on the public transport that are necessary for many of his peers. The spare time he does get is spent playing video games. He has minimal disposable income, most of which goes to his two kids on child support that he can barely afford. Unfortunately for Jirus, he only gets $12 an hour. When asked if he had any particular complaints he said, “Nah, it’s like this anywhere else you go.”

Jirus’ story is common throughout the restaurant industry in New Orleans. The workers are overworked, underpaid, and undervalued. Many need to take on multiple jobs to attain even the lowest standard of living. The vast majority employed are waiters or waitresses working on average for $9.57 an hour. However, restaurants are only required to pay the wait staff a minimum of $2.13 an hour, and the rest comes from tips, making their salaries fluctuate based on the amount of people coming through each day.

Cooks make up the second largest demographic and are paid on average $11.43 an hour. With a comfortable living salary in New Orleans being just over $60k, it is evident that  the majority are living under that. Jobs that pay more than $15 an hour, which make up only 7% of the entire industry, are unevenly skewed towards white workers, putting the majority of its employee base inherently at a disadvantage. Shifts can last anywhere from 4 to 8 hours, and can be exhausting, either having to deal with customers all day, or providing the food that makes them come back.

Those in the hotel industry do not fare much better. Darrell and Donovan are two bellhops working at the Westin in the French Quarter. They stand outside opening doors, parking cars, and unloading luggage from 3:00 PM to 11:00 PM every day. They are friendly and charming to the utmost degree, mostly because they have to be. According to Donovan, “You gotta work for the tips. Have some personality. You can’t expect them to give you anything just doing your job.”

Darrell and Donovan, too, rely heavily on tips, which can be hard to come by during the off seasons. “The off seasons are slow, not too many people coming through. And when there aren’t any people coming through, then there aren’t many tips.” Darrell even works as a bellhop at another hotel in order to make a more comfortable living. Both have minimal health insurance. If something were to come up, it’s unlikely that they would be fully covered. Despite these working conditions, neither seem to mind.

The number of people working in the hotel industry make up 6% of New Orleans’ workforce, and are a major part of New Orleans’ economy. However, its employees have some of the lowest wages in the city. Although there is a wide margin of wage possibilities, the majority skew towards lower wage jobs. Like the restaurant industry, there are relatively few jobs that pay more than $15 an hour, and again those are disproportionately filled by white people, who barely make up ⅓ of all hotel employees. Maids and housekeepers make up the bulk of the industry’s employees and make a median amount of $10.60 an hour. They are followed by desk clerks, and maintenance and repair workers. Similarly to those in the restaurant industry, they fall below the comfortable living standard.

Low wages paired with an increasingly expensive housing market has become problematic in recent years. According to the Data Center’s report, the median cost of living rose from $788 in 2004 to $931 in 2016, an 18% increase. When a household spends more than 30% of their pre-tax income on housing, it is federally defined as “housing-cost burdened.” That makes 57% of those working in the tourism industry housing-cost burdened. According to the MIT living wage calculator, the average household with 1 working adult spends more than half of their monthly salary on housing. When ranking the top 10 largest occupations, only 2 (supervisors and repair workers) are able to afford the most basic living situation in the metro area of New Orleans.

Over the last couple years, however, the city’s tourism industry has seen unprecedented growth. In 2017, tourism and travel research company DK Shifflet and Associates reported that New Orleans hosted a record breaking 17.74 million visitors, an increase of 5.7% from the previous year. Additionally, direct visitor spending reached $8.7 billion, a 6.02% increase. Despite this growth, the city is referred to by some as a “crumbling infrastructure,” citing its aging drainage systems, water treatment systems, and poor road conditions. However, much of the profits either go directly to the state, or the many tourism boards littered throughout the city. Mayor Cantrell has expressed interest in reverting profits away from the tourist industry and using it to improve city infrastructure, specifically the aging water purification and sewage drainage systems. This will prove difficult without support from the industry heads, who will of course, fight for the most profits they can get. To aid the Sewage and Water Board, Cantrell plans on committing $75 million initially, and $40 million recurring over the next few years.

On April 3, The Advocate hosted a forum that consisted of professionals from both sides of the argument. The local government representatives argued to divert tax money away from the state and tourism boards to use directly for the city, while the boards argued that they need the money to continue to market and sustain the city’s tourist appeal. New Orleans hotels alone will potentially make $200 million this year, with the city only barely receiving $19 million. Amy Glovinsky, CEO of the Bureau of Governmental Research stated, “The conversation today must include…the reality of the critical need for infrastructure funding and what role the tourism entities should play in responding to this problem.”

Those representing the tourism boards stated that the money would be used in order to stay competitive with other tourist drawn cities, like Las Vegas and Atlanta. However, when compared to cities with similar economic growth over the last decade, New Orleans wages fall significantly lower among the likes of Las Vegas, Atlanta, Charlotte, and Nashville. Although they say that they want to compete with these cities, they have no intention of competing with their job markets. When the forum came to a close, there was no apparent progress made.

It is pretty remarkable that millions of tourists are supported by some 15,000 locals, who seldom receive the necessary compensation or recognition. Although the majority of conversations have focused on what to do with the tax dollars generated by the tourism industry, those actually accumulating the profits are being overlooked. Without employees bearing the brunt of the work, the “capital investment projects” that the tourism boards want to make happen are impossible. The investment in city infrastructure is certainly important, but at the moment, the city does not have any plans to aid its tired workforce. There is a shared cynicism among this class of workers that believe the issues they face every day are just part of the job. For an economy that relies largely on its service industry, its workers are not being taken care of. Without any improvements to their quality of life, the sustainability of the status quo is questionable.

Krewe: Different from before, the nouveaux French Louisianians
Education