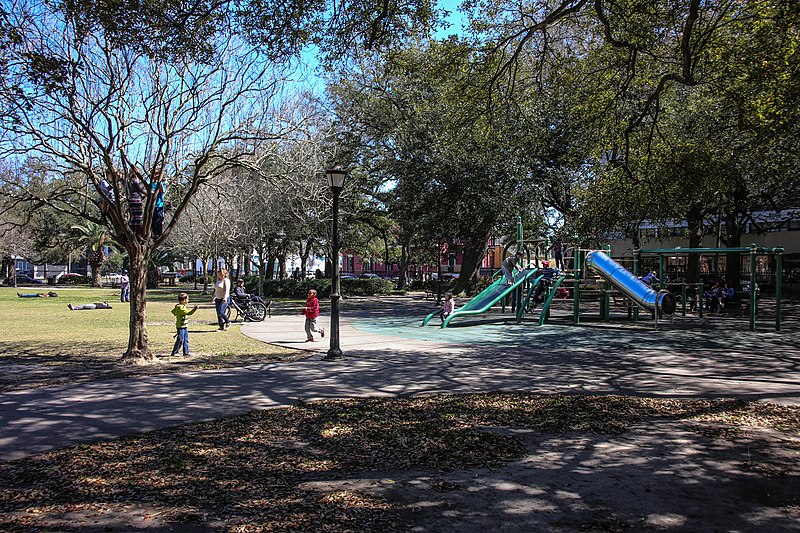 What are we to do when a playground in New Orleans is built on an old Agent Orange factory site? (Photo: Wiki Commons)

For 50 years, chemical manufacturing plant Thompson Hayward in New Orleans made DDT, Agent Orange, and other pesticides. It shut down in the 1986, but pollution from the plant impacted nearby communities long after its demise. You wouldn’t guess that dark past from a visit to the playground, with its cheery equipment and bright green grass, that now stands in its place.

“This is one of the worst contaminated sites over New Orleans, and it’s just this one-block piece of property,” says environmental expert Wilma Subra, shaking her head as she watches boys play on the basketball court. “It was cleaned up to industrial standards; it wasn’t cleaned up to residential or recreational standards.”

That’s because, when the site was originally remediated, there was no way to remove the toxic soil.

“They didn’t know how to get rid of the contaminated soil. There was no place in the United States for it to be sent to if they excavated. So after they did the initial tearing down of all the buildings, except the warehouse, they put a foot of good soil and then an asphalt top just like a parking lot.”

According to records of the class action lawsuit brought against the Thompson Hayward corporation, plaintiffs suffered multiple health issues that likely stemmed from their exposure to the chemicals around the site, even after it closed in 1986. These included cancer, kidney problems, birth defects, and miscarriages. The picture Subra paints of the repercussions of lingering contamination is extremely grim.  These women who suffered had no idea that they lived near such a toxic site. “They weren’t aware as they lived there for generations. As it was operating. They had no idea what was going on; they knew it smelled bad.”

Subra also has reservations about the documentation of the clean-up by the Louisiana Department of Environmental Quality because, as she says, “in the old days, everything was paper. So you had to go to the DEQ and ask for a file on the site. I would find some things I really wanted. So I’d mark it, come back in a week, and it was gone. They didn’t have a master to recreate. So the paper file was open to anyone who wants [to see it], and all you had to do is have your bag down there. If the industry wanted to get rid of it, just slip it in your bag. Yeah, they had nobody watching you what we’re doing…So, some of the records for the site may be missing. We can only speculate on the impact that could have had on the plans for the playground that is there today, or on the remediation that occured at the site.”

Topsoil was replaced, but Subra does not think this was sufficient, especially in flood-prone New Orleans.

Meanwhile, children continue to shout with laughter in a playground built atop a former Agent Orange factory.

Maybe we shouldn’t get back to normal
Environment

A toxic trek through NOLA hazardous waste sites: Gordon Plaza
Environment
We use cookies to ensure that we give you the best experience on our website. If you continue to use this site we will assume that you are happy with it.Ok