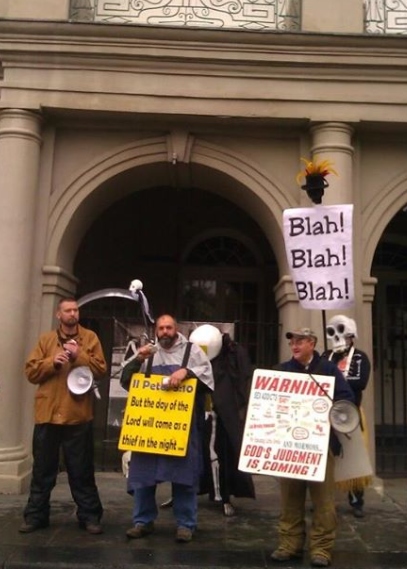 Religious protesters in the French Quarter. (Photo by: Kelley Crawford)

Walking on Canal Street, Google Maps guiding me through my new unfamiliar city, I look up and it hits me. This is it, Bourbon Street. I’ve heard the stories, seen the pictures, watched endless Youtube videos, but now I was finally here, the most famous street in New Orleans.

I was starting college for the first time, in New Orleans of all cities, and now I was on Bourbon Street, which to be fair, still brings out a childlike excitement in me three years later. Something about Bourbon Street was intoxicating, and it wasn’t just the Hand Grenades. It is the epitome of party culture and a great reflection of the city and its “Big Easy” attitude.

As I reached the first corner on Bourbon I did a 360 to try and locate my parents through the sea of drunk people stumbling around and bumping into everything. Spinning around like a clueless tourist, I came face to face with a 10-foot tall cross smack in the middle of the street. My excitement quickly turned to weird curiosity as I started walking towards it. Forcing my way through the crowd my imagination started to run wild guessing at what the massive cross could be: a religious sculpture, an advertisement for a bar, a strange drink dispenser? As I burst through the crowd, clothes doused in sweat and spilled drinks, I found myself standing in front of a group of religious zealots pushing their views on any and every passerby. The man standing at the front of the group, who looked like he just came from the set of Duck Dynasty, had the same look of shock on his face as I did; likely due to the fact that some lanky 6’3,” curly-haired, and very stereotypically Jewish looking college freshman just emerged from the crowd and was now towering over him in the middle of Bourbon Street.

After a tense and awkward minute of the two of us staring blankly at each other he resumed his preaching, only this time more forceful and directed towards me. His nonsensical, religious tirade was filled with racism, homophobia, borderline anti-semitism and a whole host of other offensive comments to match his equally offensive shirt and matching picket sign. The stubborn and argumentative side of me took over. As this guy continued to yell in my face, informing of all of the sins I have committed in the eyes of God, and how I was destined to burn in hell if I did not repent and accept Jesus as my lord and savior, my mind went into overdrive, loading up on ammunition to let loose on this guy. A confident smirk emerged on my face almost as if to sarcastically ask the man, “You done yet?”

Whether he was curious to hear my response, or he was out of oxygen from ranting for so long, he stopped talking. Immediately and admittedly immaturely, I started laughing in this guy’s face. I looked him in the eyes and took a breath, but before I had a chance to begin, I felt a strong hand on my shoulder pulling me back. My parents, who had finally caught up with me, were touting their all too common look of annoyance and disapproval. After a brief lecture about acting stupid and looking for trouble, we moved on.

What if my parents hadn’t been there to stop me? What would have happened? Could we have had an intellectual discussion about religion and freedom of speech? Would any response I made resulted in an argument? A fight? No one can say for certain, but maybe, in an ideal scenario, it could have played out a little like this:

“What? Do you have something to say?”

“I think that what you are saying is completely inaccurate and offensive.”

“This is America! I can say whatever I want. Freedom of Speech!”

“Ok well first let’s establish some context. The “Freedom of Speech” that you are talking about comes from the First Amendment to the Constitution, in which is stated: “Congress shall make no law respecting an establishment of religion, or prohibiting the free exercise thereof; or abridging the freedom of speech, or of the press; or the right of the people peaceably to assemble, and to petition the Government for a redress of grievances” [6]. The premise of this amendment is to protect the people from government action being taken against them for speaking out against the government. So you are right, there is nothing about “hate speech” in the Constitution, certainly nothing prohibiting it. It does not, however, protect you from an individual taking actions in response to what you are saying. Meaning, there is nothing in the first amendment that legally prevents me from taking any action in response to what you were just saying.”

“So I can say whatever I want.”

“Not exactly. There are two Supreme Court cases that we need to address before coming to such a conclusion. The first is Brandenburg v. Ohio in 1969 [2]. This case found that the First Amendment right to free speech does not protect you if your speech is meant to incite immediate unlawful behavior, which I do not believe you are doing. The second case is Chaplinsky v. New Hampshire in 1942 [4]. This court case established the fighting words doctrine. This is the idea that the “freedom of speech” does not protect you if your words either written or spoken are intended to incite violence or hatred; for which I think a case can be made in regards to your speech.

“Well, although your speech is not directly calling or initiating violence, they do incite hatred. You are targeting specific groups of people and preaching, under the guise of religion, that in some way are inferior or bad as a result of an aspect of their identity, usually uncontrollable such as race, or sexual orientation. This to me, is an incitement of hatred, and promoting hateful and scientifically false views.”

This back and forth could have gone on for hours without either of us letting up. Thinking back to that day on Bourbon Street, I wonder why I felt so compelled to respond to this guy. I didn’t take what he was saying that personally, and he didn’t go out of his way to target me. So why did I feel the need to say something?

I think this has much to do with the political culture we have created in our society, particularly in the United States. Identity politics has become a widespread phenomenon [7]. Much good has come from this, however, inevitably with the good, there comes some bad. On one hand, policies have been created to help those who have been disenfranchised, such as the LGBT community, woman, and other minority groups. However, this support has come with significant pushback from those who feel that politics is a zero-sum game. It is clear to see how tribalism has impacted the way we discuss politics in the United States. People have become increasingly more partisan, emphasizing on party allegiance more so than on actual policies [5]. This combined with the rise of the internet and social media has allowed political debate to be a constant part of peoples’ lives. Everyone is able to post their opinions and beliefs without any form of fact-checking or vetting, with the simple push of a button. President Trump, for example, has posted a shocking 37,526 times since taking office 812 days ago, an average of around 46 posts per day [3]. This has led to very tribal culture, particularly when it comes to political and social issues which tend to already be divisive to begin with. Debates surrounding these issues have become increasingly less about determining objective truths, and more about attacking people who oppose your side of the argument. Instead of an intellectual discussion, people resort to calling each other out on social media, yelling, protesting, and increasingly more so these things have led to physical violence. People have become so emotionally invested in their own opinions and beliefs that any challenge to those beliefs is taken as a direct attack on them. This tribalism is not just a problem with political issues, it is seen in every aspect of society.

A great example is the hotly debated topic of locals versus transplants in the city of New Orleans. New Orleans in recent years has become a hotspot for travel and a very popular place for people to move to, particularly younger people seeking out the party culture and “Big Easy” attitude [9]. This has coincided with increasing gentrification in New Orleans and the rapid decay of New Orleans culture and history [8]. Issues have come up surrounding companies like Uber and Airbnb who followed these transplants and are now taking money out of the city [1]. However, instead of having an intellectual discussion to figure out solutions to this issue, each side has continued to stick to its convictions refusing to compromise. This has led to very little progress being made on issues that do truly impact the city and the people.

Tribalism and partisanship have shaped the discourse of our society. We have strayed from intellectual debates in the pursuit of knowledge and truth, preferring to let our emotions take over, leading to the spread of false information and a perpetual, vicious back and forth that ultimately leaves us stagnant with little hope for compromise and progress.

[7] Lozada, Carlos. “Identity Politics May Divide Us. But Ultimately We Can’t Unite without It.” The Washington Post, WP Company, 18 Oct. 2018, www.washingtonpost.com/news/book-party/wp/2018/10/18/feature/identity-politics-may-divide-us-but-ultimately-we-cant-unite-without-it/?utm_term=.cfb40d024218.

Nowhere to go but deep in our phones
Reflections