Sitting down with artist Adrian Deckbar 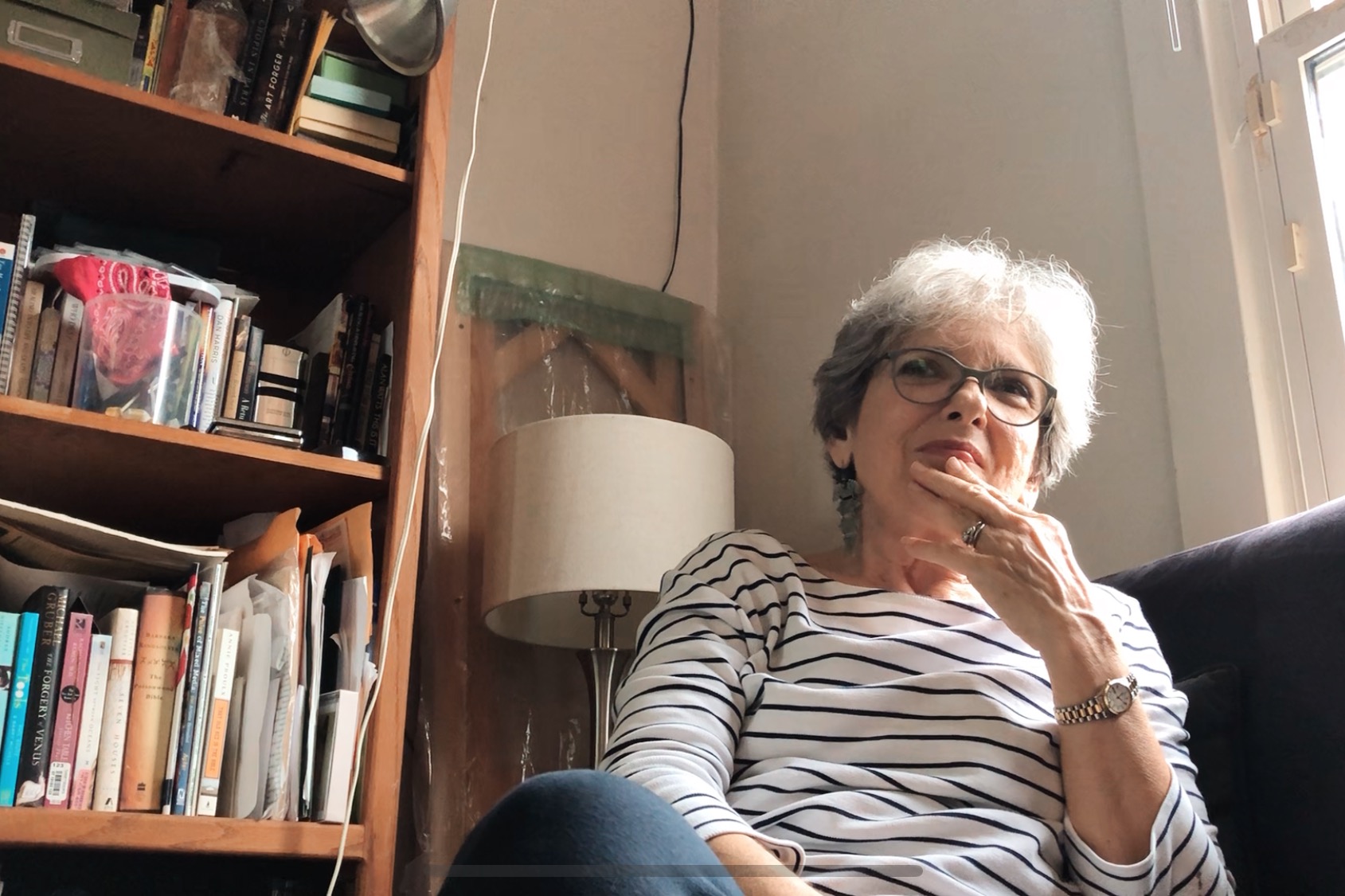 Adrian Deckbar in her home’s gallery in Uptown, New Orleans.

What: Photorealist Painter from New Orleans

Words to remember: “Then I’d go to the French Quarter and hang out, dressed up like a hippie. I could show you a funny picture if I could find it of me; I don’t know where it is though, in 1968, where I had hair down to my knees and a mink coat from Salvation Army. I just thought that’s how life was. I was a New Orleanian.”

Endless amounts of paintbrushes, sketches, photographs, and worn books line the walls of Adrian Deckbar’s in-home gallery.  Observing Adrian’s intricately-decorated living room filled with delicate furniture, large wall paintings, and other nostalgic tchotchkes, it was clear to see how much attention to detail Adrian puts into absolutely everything she does. One cloudy afternoon in Uptown, New Orleans, I got the chance to visit former Tulane art professor (one of my current teacher’s former professors) Deckbar just a few streets down from my own home. Upon arriving, Adrian greeted me, filling her front doorway with ambient music playing from a speaker behind, with her kind smile.

Before settling into our discussion however, Adrian immediately began telling stories about herself, her home, and her journey as an artist growing up in New Orleans (pointing out items along her hallways as she gave me a brief tour). Like myself, Adrian calls herself an artist; although after this afternoon meeting, I learned a whole new meaning of the word — what it means to practice as one, evolve as one, and live as one. One that is ultimately one — one with art, nature, and themselves. Adrian Deckbar, New Orleans local and native, is a phenomenal photorealist painter whose subject matters mainly focuses on natural landscapes and the human figure (as seen in her work exhibited in multiple galleries and countless one-person exhibitions).

Deckbar’s passion for art began at a very young age, around 10 years old, while learning how to paint the highlights on a bowl of grapes from her own older sister’s instruction. At the same time, Adrian played the violin in her school orchestra, but found the “collectiveness” and repetition to be ultimately detrimental to her creativity. Embarking to capture and fantasize images of the real world (depicting images of nature and and human figures) in her own paintings, Deckbar practiced her artistic expertise through her education as she grew older receiving degrees from the University of Louisiana at Lafayette (BA ‘73), San Francisco State University (MA ‘77), and Tulane University (MFA ‘81). Eventually becoming an art professor at Tulane, and later an art teacher for adults, Deckbar has influenced a whole wave of artists in and out of New Orleans through her work. Explaining her own personal practice of photorealism, Deckbar emphasized how her own painting style changed over the discourse of her life and career, perfecting her composition and craft to a T.

Growing up in the Big Easy as a teen, Deckbar eventually found herself fully immersed as a New Orleanian living in the creative counterculture of the late 1960s, attracted to alternative crowds of the “weird” and “different.” Deckbar describes her own life as unusual, filling her hours of time with her art, friends, and the natural world that surrounds her. As a true visionary, Deckbar creates photorealist paintings that are extremely realistic, although dramatized by her own manipulations of shape, color, lighting, and composition.

Throughout our conversation, Deckbar continuously referred and pointed to the three paintings she has been working on simultaneously. Deckbar explained how she will often see a certain visual or image that she wants to paint or recreate, captures a photograph of that visual to then translate onto a larger scale (or canvas), and then work on it for several weeks tweaking the imperfections she finds. As an artist, Deckbar explains, there is no ultimate end for her career (in the near future). Until Deckbar can’t put paint on a canvas, her work will continue to evolve, recapturing life’s realities and fantasies through her glorious paintings. 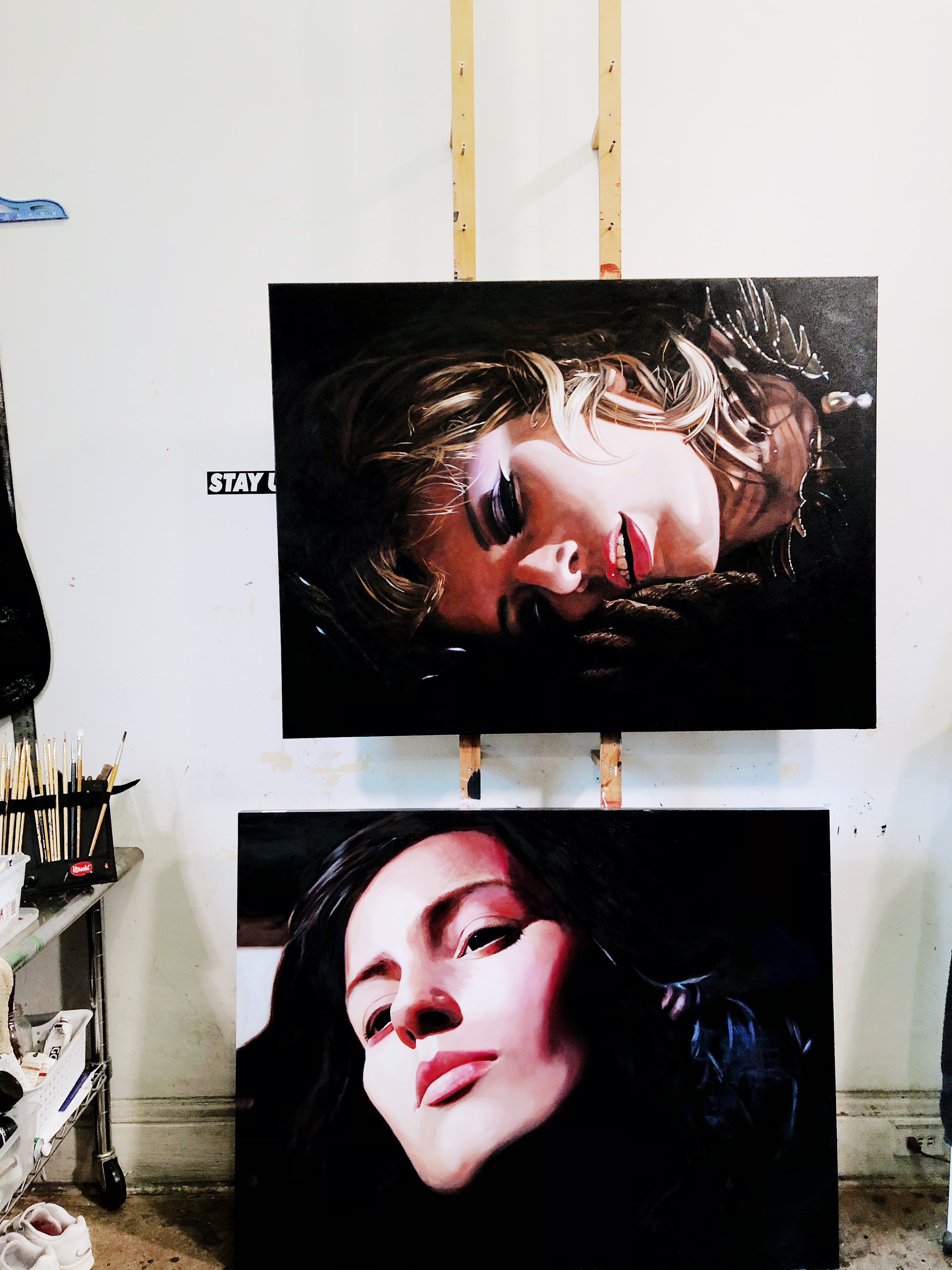 The following excerpt is transcribed from my in-home interview with Adrian Deckbar. A video clip is posted at the bottom.

Q: My first question for you is how and when did your passion for art exactly begin and what led you to continue on?

AD: Partly because my sister (who was nine years older) went to an art school in New Orleans, famous now and in the French Quarter, called McCrady’s (McCrady Art School), where people just went to study art. She went and learned stuff and came home to show me, and I was nine years younger, and she was 18 or 19 (so I was about 10), and she showed me how to paint. She put grapes in a bowl and said look, the highlights are here, and the shadows here, and the ellipse of the bowl does this. I remember just thinking wow. At the same time I was interested in fashion and drawing fashion models because back in those days, in 1959, 1960, they had pictures of elongated models all dazzly showing their dresses off, and they were all drawn. So I would copy those drawings over and over. When I was 9, I was introduced to the violin and I started playing and I got really good at it. Music and art became my passion, and I was alone a lot and I didn’t care. I was just so happy to have this fun stuff to do that I was really good at. As I grew different teachers recognized it, so all through school I was “the art kid.” So it has just always been with me. In a way lucky, in a way a curse, I don’t know, because there was never any other thing.

Adrian described how for over 35 years she continued to paint “people, people, people, people, people, people, people,” later taking a break to move onto natural landscapes (of her Louisiana and Arkansas). Maintaining her solo career through the competition of landscape artists (specifically post-Katrina), Deckbar decided to return to what she loves and does best — draw people. Our conversation then led to a discussion about the recent documentary Leaving Neverland and how art can help push and transform society where Adrian expressed her greater concerns for the political, social, and economic chaos that is heightened by modern media.

AD: The world we live in is so full of shit. So I want to try to reveal the truth, and that is a big thing to take on in a painting, but if I don’t reveal my truth and speak about it, what am I doing on the planet? You know? So that got me I have to tell you. But you know, when I was your age and thought 68 “man life is over,” what is interesting is, if you have good friends and some smart people out there that are thinking with you and you can move around, exercise, and stay vital and strong, you can still do stuff. So I’ve been focusing on the people who are like 90 who are still doing stuff, and not getting like you know I’m 68, I have to go sit in a rocking chair and just look at magazines. No. I’ve got stuff to say. So I really still feel things that deeply. I’m still just as affected as I was when I was 25. I think it’s being an artist. I think living an artist. So that is a big long answer to your question. [Laughs and sips mug].

Q: As a New Orleans native, how has the city itself shaped you?

AD: Growing up as a kid here I took art for granted. I took a whole variety of people for granted. I went to a high school that is now called Lusher. I’d go to the French Quarter and hang out, dressed up like a hippie. I could show you a funny picture if I could find it of me, in 1968, where I had hair down to my knees and a mink coat from Salvation Army. I just thought that’s how life was. I was a New Orleanian. So I went to art school in Lafayette, Louisiana all hipped up and groovin.’ I’m then looking around and there are all of these people with like flips on their hair and little matching outfits, and I was like “oh my God, where are my people?” You eventually just see one of your kind and reach out because all of the little frats and all of the little normals were just going along not thinking.

I was always thinking about all of this intense stuff and how they were marrying the rich guy, to go have the kids, and you know, I never wanted kids. I’m unusual. I didn’t want a usual life. So I got there and said I have to get the hell out. I had to get to San Francisco or New York because the people who were one or two years ahead of me all were going there, the good people.  San Francisco was like New Orleans. They had a lot of gay people, artists, and people were weird and fun, and you could go out and do anything you wanted. This was the 70s, not now, San Francisco is now very high-tech and different. In the 70s they were like sister cities and I felt at home.

I came back here for family problems and got my MFA at Tulane. They let me use a lot of my credits and teach, and sort of hang out, I really didn’t have to do much. Then I met more people in the field. I met Arthur Roger and got in the Arthur Roger Gallery which was a big boost to my career. New Orleans has been great. I don’t know if I had been in Iowa or somewhere if this would have worked out like it did. It’s been a good ride and I’m still riding it. I’m 68. You know other people have to retire, they have to turn in their key and go “oh well, I guess I’ll go to the country club and play cards and bingo” but luckily with artists, you don’t retire until you can’t paint anymore. As long as you can hold a brush, make some decision, and put paint on a canvas, you can make art. It’s pretty great. I hope to be at it for another ten or twenty years. Maybe when I’m 88 I’ll make my best painting. So, I don’t know, we’ll see. But no, I think it has affected me and it is a great city. It is a great city. I hope it doesn’t wash away.

Then and now: An oral history about race with Dr. Reginald Parquet
Extra/ordinary