This content was originally published with Big Easy Magazine, a publication dedicated to being a progressive voice for New Orleans and a soapbox for residents in every neighborhood. You can find this article and more content all about the Big Easy here. 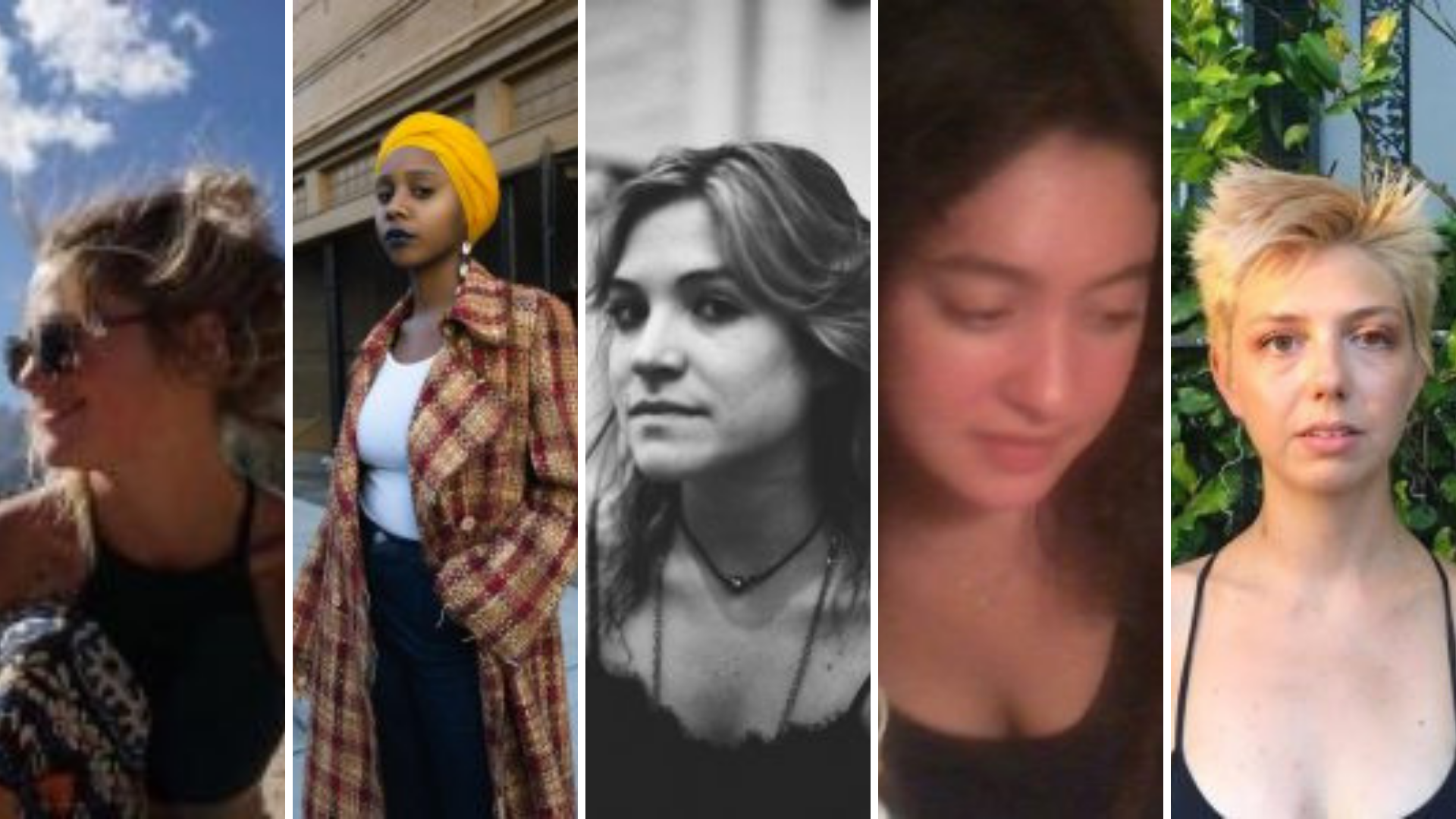 New Orleans is a city that harbors a great deal of talent.  When most people think of New Orleans, they think of the music scene, particularly Jazz groups and Brass bands.  While it is true that our great city harbors much musical talent, it is also bursting at the seams with creative talent of all sorts.  New Orleans is chaos and order colliding. It is a melting pot of cultures in a way that few other cities are. It stands to reason that out of a city that is poetry, great poetic talent arises.  In a field historically, unjustly dominated by men, it is important to shine a light on the talented women who are breaking out onto the poetry scene. What follows is a highlight of five rising women poets in New Orleans: Kellyann Bates, Julia Taylor, Sharita Simms, Molly Kirschner and Camille Goering share their thoughts, works and lives in the profiles below.

All of these poets have been previously featured in Big Easy Magazine’s art section!  Each Wednesday we feature a local poet’s work! Be sure to check back on Wednesday for new and exciting work from these five! Up this week is Camille Goering. A teacher of English and French in New Orleans East, Camille Goering fell in love with New Orleans during Mardi Gras of 2006.  For her, poetry is “an attempt at existential inquiry.”
Of Choice

it crowns my mourning thin bedfellow,

Her with eyes spilt splinters on the sweat-steamed bathroom floor

Before this shelter, black hole bombing

The alien blue space draft  in which she dwelled before

As one snuffs pain, the yawning of her veins,

To bend, to break, the crested shadows on her face

Each swell of skin clipped in wrinkled lace

All bent fingers slammed straight  in the swinging door

That opens for others, her sober sisters and brothers,

For her I leak from needle valves within

A melting shroud on stain-seared skin

For her I’ve mastered, paced disasters

Though at the falling, of dusk and shutter

The hunger for thickness, spread over the clutter

Snap the limbs and stroke the core

I’d rather fear, the view from here

Than know by slow heart the pickets of the white framed door.

Camille: I can’t tell you much about who I am but I can try to describe the experience of being me. I’m the goldfish that the kid won at the carnival and took on all the rides and then felt bad for and threw to the ocean. Except I’m still in the plastic bag. I’m at the very beginning of a journey, realizing that I’m a part of something unfathomably expansive and ubiquitous, but still separated from it all by a thin layer of filmy opalescence. Call it ego or illness.

I’m still reeling pretty hard from the (largely self-generated) hurricane that was my life before I decided that peace and presence of mind, however boring, were more worth aspiring to than chaos. And the hunger hasn’t dissipated at all- the hunger for more, more of everything. So I’m navigating the world, driven by that hunger, but still feeling very much apart from it. I’m still not sure if that’s a choice or just a feature of my brain chemistry.

Nolan: When did you first start writing poetry and what’s your goal in doing so?

Camille: I’ve always existed in a state of unease and anticipation like if I could only remove my self from the limited dimension that I occupy, I could make sense of it and live a more meaningful life. Poetry is an expression of that, an attempt at existential inquiry. I grew up in an apartment building that didn’t have a thirteenth floor (superstitions are so fascinating to me- I’ve got plenty of them which really offends my rational mind) and it felt to me like it was my job to create a myth around that, to explain what had happened to the thirteenth floor. My mother and my fourth-grade teacher both had me write stories about it, and I guess that’s when I started to experience writing as an epistemological process. My theory was that the souls of people that had died in our building were kept there until someone figured out what to do with them. When my mother died, it felt like I had already written her into immortality. But I was also fourteen years old and getting drunk and reading 19th-century Russian novels so it sort of fit the persona I was trying to create for myself.

I read a book with my students called The Giver in which the characters are only able to perceive the world in monochromatic tones. There’s a scene in which the main character is gazing at an apple and the object begins to change before him, quivering with an indescribable quality that he has never seen before. What he doesn’t realize is that he’s experiencing the qualia of color. That’s sort of what poetry is to me, a ubiquitous feeling of being perpetually touched in a place you’ve never been touched before. It’s this suspicion that I have that there is something beyond my limited depth of perception, that I can feel something stirring beneath the surface of things and I want to try to describe it.

Nolan: What is your connection to New Orleans?  What does it mean to you and how does living here effect your poetry?

Camille: I came to New Orleans for Mardi Gras the year after Katrina. I was a kid, and I fell in love with it, in the same violent, uncouth way that I’ve fallen in love with people. There was a gentle desperation in the hedonism, and an aftertaste of compassion in everything that people did here. It’s a pretty reductive perspective but I was an eleven year old with poetic inclinations so that kind of thinking is inevitable.

I finally moved here, to the Irish Channel, in 2017, and now I teach English and French at a high school in New Orleans East.

I’ve always felt about New Orleans the way that one feels about a person with whom one has too much in common: curious, obsessed, apprehensive. It is the only place in the world that makes me feel tangible, like there are physical counterparts to the characteristics of my personality. My poetry has always and will always be about New Orleans because it’s always about me. My ego is, unfortunately, relentless.

Nolan: What unique challenges or circumstances have you faced being a woman in a field that has been historically (unjustly) dominated by men?  How have you overcome these hurdles and how dies this come through in your work?

Camille: The challenges that I’ve faced have been largely self-imposed. Most problematic, I think, is the pervasive glorification of self-destruction that has colored how we talk about male writers with mental illnesses and substance addictions. I grew up reading the words and listening to the lyrics of countless men whose descents into addiction and despair were often touted at worst a byproduct of art, at best a symptom of their brilliance. John Berryman once wondered “whether wickedness was soluble in art.” And I think, for men, it often is. And I wanted desperately to be a man for a very long time. So when I met my demons and realized that I could enlist them in the creative process, I cited the examples of John Cheever, Raymond Chandler, and Charles Bukowski to justify marinating in my misery. But it made me very sick, and very unhappy. I read a lot of biographies and did quite a bit of research. Behind the veneer of the tortured artist was the same miserable, bloody, shit-stained inertia that plagues us all. That helped to shift my perspective a bit. I’ve realized now that being broken won’t make my poetry any more whole.

Nolan: What are your goals with both your poetry and your life overall moving forward?

Camille: I’m typically not much of a goal-setter because meeting goals doesn’t really give me the feeling it’s supposed to. I want to just keep writing, and write more. I’d like to finish a book of poetic fiction in the sort of style of Anne Carson. Autobiography of Red is one of my favorite books.

I want to keep teaching, but not in the traditional sense. There is so much more power in detaching oneself from the process of teaching, in being a guide or facilitator to others’ own personal discoveries and learning experiences. That’s what I aspire to be, I guess. A companion in others’ journeys of inquiry.

You can read more of Camille’s work on her website, MilktoGin!  The poem Of Choice was first published on MilktoGin on October 7th, 2018.
Tweet