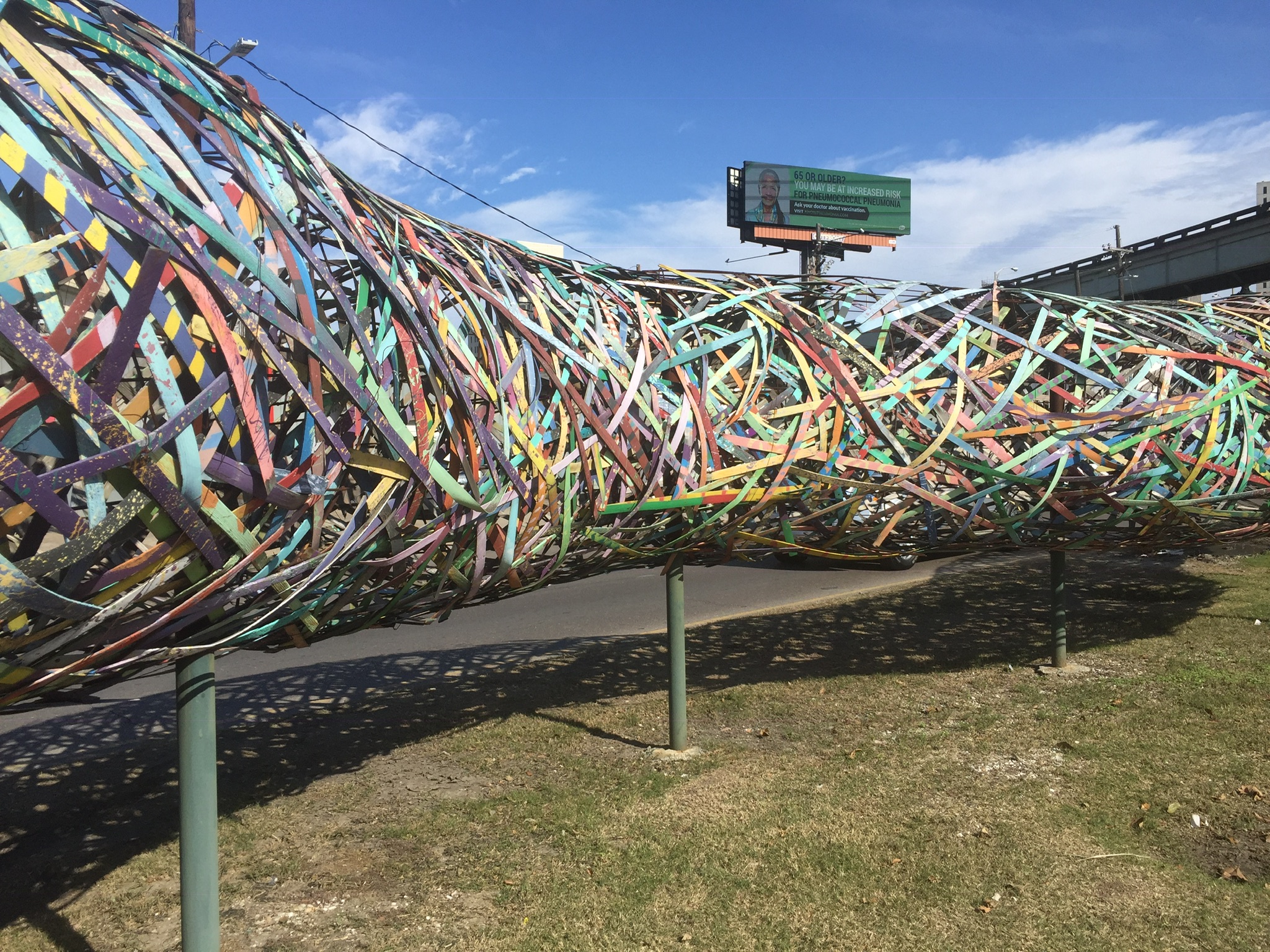 Nestled on the corner of Poydras Street in the central business district is the VOLPANG sculpture created by Michigan-born artist David Borgerding. In 2000, after completing his masters in art at SCAD he moved to New Orleans, setting up his new studio in the Irish Channel neighborhood [4]. It seems all to convenient that his early acquisition of welding skills would become the medium for his eye-poppingly original art. Constructed out of silicone and bronze, it depicts an abstract figure with subtle, human-like qualities that catch the eye of anyone in passing. Installed in 2015, it joined several other sculptures part of the Poydras Sculpture Exhibition that have been there since 2013 [1]. The collective was founded by the Helis foundation, which aims to improve local morale through art and providing an opportunity for artist to show in a public venue [1].

Requiring installation by crane, it’s safe to say VOLPANG is rather cumbersome. It stands approximately twenty feet tall with robust metallic limbs branching off in all directions; supported only by an ankle-sized copper limb. The work is, in itself, a wonderful display of human understanding of physics. Its logic-defying beauty captivates the potent imaginations of local residents; who by living in a city doomed by the sea possess incredible resilience against the unrelenting march of time. At a first glance there seems to be no particular manner in which the structure is shaped. But As Borgerding describes it himself, “the thin to the fat” is a common element in his other sculptures such a “Tomo”; a smaller but better example of this precarious style of metalwork [3][4]. The effulgent copper skin resembles what the Statue of Liberty would have looked like when the French first dropped it off on America’s doorstep. Classic American materials serves as an attractant, like a shiny lure to a fish. The longer, thicker limbs of the statue appear to be the legs while the delicate strands cascading softly downwards from the top resemble long, flowing hair. From my perspective, the sculpture illustrates a female dancer performing a front high kick with her head and arms drooped back in a relaxed fashion. This is a move seen commonly in dance when there’s a heavily accented beat or pause in which the dancer has time to fully sprawl, supported by the tips of their toes.

VOLPANG’s abstract character places the burden of interpretation especially on the audience. There are limitless reasons an artist would make this decision, for expression of ambivalence or to evade criticism by not connoting his or her art with a definitive statement. Whatever the reason, this choice allows the observer to ascribe their own meaning to what they see, giving Borgerding’s art the ability to resonate with anyone who sees it.  Especially in New Orleans, where there is still controversy over many of the existing historical statues and monuments, the originality of his work exponentially increases the chances of a positive public reaction; it’s virtually required of any sort of new installations that will be displayed in a public space. Undefined art typically carries the most historical inertia, sticking with cultures throughout shifting paradigms, more than anything because they are not bound to time, rather transcending any concrete definition that otherwise would inevitably be considered taboo. Famous abstract artist Kazimir Malevich stated in The Non-Objective World, “In the year 1913, trying desperately to free art from the dead weight of the real world” [5]; It’s this dissociation from reality that people often seek in art which is why it’s considered pleasurable.

Regardless of what VOLPANG is meant to depict, Borgerding’s work evokes feelings of whimsical freedom. Something about the arbitrary form and softly-curved copper branches tells onlookers that this piece was not created to satisfy their logical appeal but rather to invoke thought and awe. The article, “To Plead Our Own Case” by Timothy Vercellotti and Paul Brewer states that individuals’ perceptions of alternative media, in this article African Americans and “black media” is correlated with perception of government; with those who view the government with healthy cynicism are more likely to gravitate towards alternative forms of media that provides, “a credible window through which to view politics and, ultimately, connect to public life” [2]. 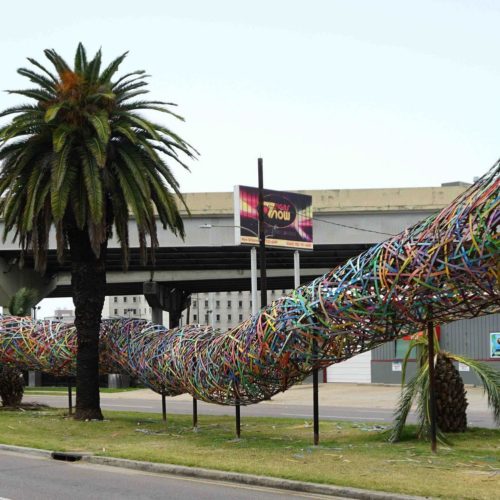 This is exactly what Borgerding’s work seeks to do. New Orleans most certainly falls into the category of alternative cities with little competition when it comes to the obscure. Life here evolved from a melting pot of cultures, and America was only recently introduced to the mix. Consequently, there are many who have different ideas of how the world, America and human life should operate. This type of post-conventional thinking is essential in social advancement, but it’s often viewed in a negative light when put up against a financial or intellectual monopoly. That being said residents of New Orleans, who have encountered more turmoil than the majority of the citizens in United States, ought to have some of the strongest opinions on government action in the country. Therefore it makes sense to think that such a niche community, where difference is the norm, would have a much higher presence of weariness towards the government and ultimately a greater chance of positively receiving this type of artwork, which challenges both artistic and social norms. This visual cry of defiance is something residents of New Orleans are looking for the same way those who critically think about our society’s power-structure are more receptive to alternative media. Taking a step back, the Helis Foundation which discovered and funded Borgerding’s work is seeking to do what this sculpture does on a larger scale. Poydras is speckled with other, similar sculptures that expose the public to non-politically-charged art. These installations on Poydras do not aim to satisfy the narrow scope of what is valid in the eyes of the majority, but rather challenge these ideas of validity with zest by taking the onlooker on an emotional rollercoaster. The delicate but heavy presence of the sculpture elicits an irrational fear that it could come crashing down any second; and that it wouldn’t be a poor idea to keep one’s distance if it did. Such a hulking structure surely should have a purpose, but Borgerding clearly has no intentions of fulfilling that expectation. Hours of thought, elbow grease and confidence put into the creation of this aesthetically pleasing hunk of metal is what separates it from a crane-installed waste of space.

Borgerding and the Helis foundation achieve more than just their goal of increasing the aesthetic value of New Orleans through local art. Borgerding redefines artistic norms for other sculptors while larger organizations like the Helis Foundation provide critical face-value for the lesser known artist, immediately adopting it into the category of normal. This is a perfect microcosmic example of how entities like art, work and journalism evolve over time. They require the same types of abstract thought necessary to understand the message attempting to be conveyed. If Vercellotti and Brewers’ assertions are true, then this era consumed by fear of fake news and cynicism towards the government will generate a new demand for alternative sources of media that make America’s affairs easier to digest for the individual.

[1]“The Poydras Corridor Sculpture Exhibition.” The Helis Foundation, The Helis

[2]Vercellotti, Timothy, and Paul Brewer. “To Plead Our Own Case.” Journal of Black