Beer and tonic, with a splash of hysteria: Vaughan’s Lounge

It was a Sunday afternoon in January. At the corner of Dauphine and Lesseps, a canopy of wood slats and rusted tin sagged over green cypress beams, and neon beer signs and Christmas lights glowed in the windows. A black pickup truck adorned in gold paint and garland waited on the curb. A multitude, wearing black and gold, converged on Vaughan’s Lounge. New Orleans was preparing for the biggest football game ever to be played in the city. The Saints were to play the Vikings in the Super Dome for their first trip to the Super Bowl. Everyone in the city, or so it seemed, was paying attention.

Inside Vaughan’s, a television flashed the pre-game show from atop the cigarette machine in the corner. The jukebox glowed silently with its array of jazz, Blues, R&B, brass bands and classic country. The sun shone low into the windows. As the room filled, the light fell and the chatter rose to a din. The “cheerleader brigade,” ladies bedecked in black and gold hats, earrings, scarves and face paint, positioned themselves in the front row of the chairs arranged to face the television. In the minutes before kickoff time the sun sank behind the rooftops. Someone pulled the chain on the florescent light affixed to the low ceiling and the room went dark. Dee, one of the cheerleader brigade, stood and turned to the crowd to lead Drew Brees’s locker room call and answer.

“We are the New Orleans Saints!” 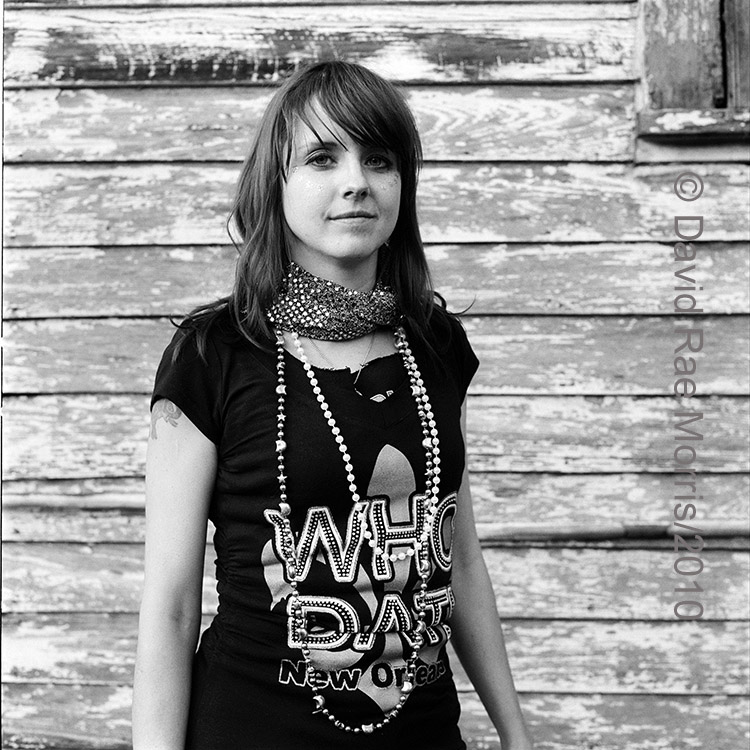 Vaughan’s is what most people would refer to as a “dive.” Dingy yet festive. Concrete shows through bare patches in the linoleum in the front half of the bar, where a canopy of purple green and gold garland festoons the low ceiling, borders the two windows that face Dauphine Street, and wraps the posts of the wooden railing that divides the room. Beyond the railing, the ceiling opens up high above the bar on the back wall, elevated a foot and a half on a worn wooden floor. Christmas lights twinkle along moldings and shelves populated with liquor bottles and dusty knickknacks. On the walls hang Saints and LSU pennants and photos of jazz musicians, regulars and friends. Left from the bar, the back room holds a few tables and chairs positioned in front a big screen TV and a table that offers free food on game days.

The people who come to Vaughan’s for Saints games tend to be rowdy and spirited. There is a feeling among the fans that they hold responsibility for the outcome of not just the game but of every play, to which they respond with shouting, cheers, and jeering that rise at times to the level of hysteria.

“We want a touchdown!”

If the referee throws a flag on the Saints, no matter how guilty they might obviously be, they shout, “Bullshit! Bullshit!”

Some people eschew these histrionics. Others revel in the fever of the atmosphere. Between plays they chant and sing the names of the players. If Jeremy Shockey catches the ball for a big play they sing, to the tune of the Mardi Gras classic, “Hey pockey way”, “Hey, hey, hey, hey, hey Shockey way.” When Reggie Bush makes a play, some are likely to chant “L-S-U, L-S-U,” a reference to his days as a star player for the Tigers. When the Saints score, the room erupts into cheering, high fives, hugs.

The Vikings game turned out to be one where the game, and Saints history, turned on every play. The people of Vaughan’s were hanging by their fingernails through the whole thing. In overtime Garett Hartley was going for a forty-yard field goal to clench the game and send the Saints to the Super Bowl. The room went silent. Everyone was holding their breath, focused with all their collective might on the television screen. Hartley kicked and the ball flew, tumbling end over end, straight and low, right down the middle of the goal posts. The tight–wire tension snapped into a roar of joy. People who were sitting jumped up. People who were standing fell down. Strangers jumped into each other’s arms and some people just stood there screaming. A few people chanted, “Black and gold Super Bowl!” As is tradition, someone punched the jukebox to play “When the Saints Go Marching In,” and the Saints fans of Vaughan’s, singing along, danced out of the door into Dauphine Street. The Saints truck parked outside cranked up and lead the second line up Lesseps, past the waving patrons spilling out of BJ’s on the next corner, up Burgundy Street and down France back to Dauphine, everyone singing and shouting. 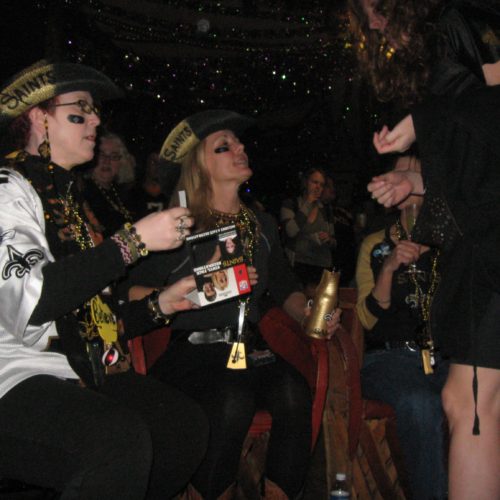 Carol and Cindy of the Cheerleader Brigade. (Photo by: Lacar Musgrove) 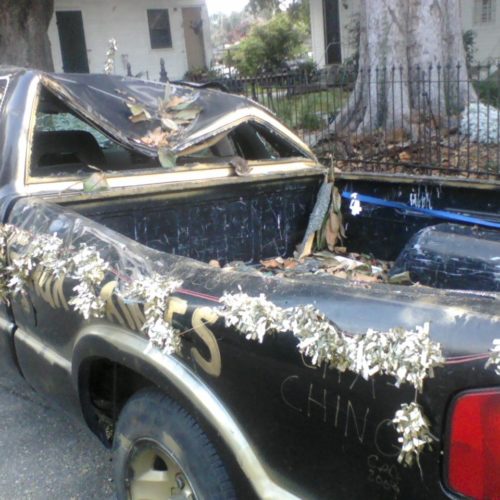 The Saints Truck met a bad end when a tree fell on it that Spring. (Photo by: Lacar Musgrove) 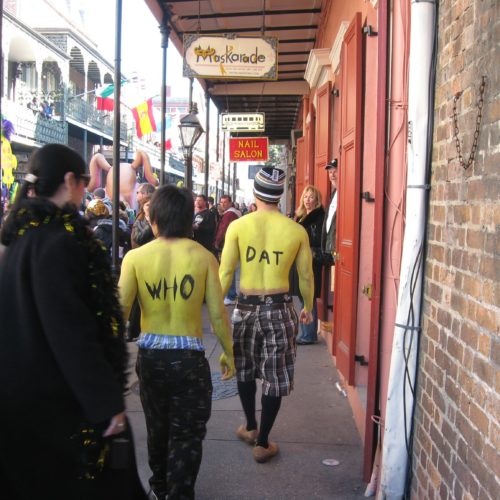 The Who Dat Nation in the French Quarter, 2010.( Photo by: Lacar Musgrove)

The atmosphere during the Super Bowl was the same as usual, only more giddy and surreal, people exchanging taut smiles with an air of drunken nervousness. Our team was the underdog, but we intended to believe our way to victory. Whether it was out of faith, talent, trickery or luck, when Tracey Porter snatched the ball away from the Colts at the end of the fourth quarter and sprinted downfield, we knew the Saints had won. The reaction at Vaughan’s, and I guess the whole city, was a kind of giant, lasting laughter of disbelief.

The day after, I went down to Vaughan’s to join the post-game discussion. Cindy, the owner, came in with a stack of Times-Picayune newspapers, a difficult score that day, and handed them out to the few people gathered there. We thumbed through the paper and recounted again and again our favorite plays. It was hard to talk about anything else for a little while, including the newly elected mayor and approaching Mardi Gras. Weeks after the Saints won the Super Bowl, the game was still playing over and over again on the big screen television in the back room.

To read even more about Vaughan’s Lounge, including its history, check out Lacar Musgrove’s longer form of “Beer and tonic, with a splash of hysteria.”

On Super Bowl Sunday 2019, Vaughan’s Lounge will be showing highlights from the 2009 season, and David Rae Morris will be presenting a slideshow of his Who Dat Nation at Vaughan’s portrait project. The party will culminate in a viewing of the 2010 Super Bowl. You can check out the details on their event page.

Beer and tonic, with a splash of hysteria: Vaughan’s Lounge (full version)
Restaurants